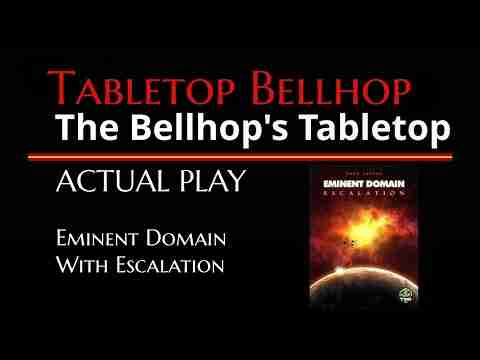 This is our latest Actual Play video where we play a three-player game of the deck-builder Eminent Domain along with its first expansion: Escalation, both published by Tasty Minstrel Games. At the end, there’s a bonus play and teach of Kingdomino from Blue Orange Games.

In this live play episode, The Bellhop (Moe), Kat and Tori’s Little Brother play the deck-building card game Eminent Domain along with the first expansion for this board game: Escalation. In this game, we are trying out the scenario rules for the first time.

Added bonus: this video also includes a quick teach and play of Kingdomino.

Support The Bellhop by picking up your own copy of these games (affiliates):
Eminent Domain

About Escalation, From the publisher:

Brace yourself for rising tensions in this next chapter of Eminent Domain! The time for unchecked expansion is over. Warmongers raise their flags over weaker empires while civilized planets take shelter behind peace treaties. Warfare becomes more important, and players can begin the game with different starting deck configurations.

Escalation is an expansion and cannot be played without the base game.

Escalation is the first big expansion for Eminent Domain. In Escalation, you get:

About Kingdomino from the publisher:

Dominoes with a kingdom building twist. Each turn, connect a new domino to your existing kingdom, making sure at least one of its sides connects to a matching terrain type already in play. The game mechanics for obtaining the tiles is clever: the order of who picks first depends on which tile was previously chosen. Make sure to secure tiles with crowns- these royal treasures help to multiply the worth of your kingdom at the end of the game! The game ends when each player has completed a 5×5 grid, and then points are counted based on number of connecting tiles and crowns.

Have you played tried this expansion for Eminent Domain? What did you think? Let us know in the comments.