In this special Extra Life stream of Gloomhaven Jaws of the Lion, we played through scenario 19: Den of Thieves.

For this live stream, which was part of our 24-hour gaming marathon supporting Sick Kids, we decided we were going to take a break from the main plot and do a side quest. We let our fans decide which one and they chose The Den of Thieves.

This was our closest game of Gloomhaven Jaws of the Lion yet. It came right down to the wire, with many turns decided by a single card draw. 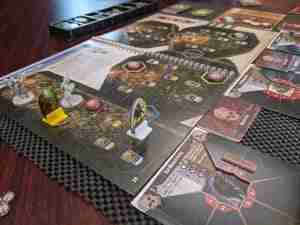 Before I get into a few thoughts about the scenario I just want to point out that we played this game as part of our 2020 Extra Life efforts. Extra Life is a worldwide charity gaming event where gamers play games for 24 hours and raise money for The Children’s Miracle Network Hospitals. This year marked the eighth year that we’ve taken part in this fundraiser and we started this year’s marathon with this Gloomhaven Jaws of the Lion live stream.

Despite the fact that the official game day is now done and over with, they are still accepting donations until the end of the year and we would love your support: CLICK HERE to make a donation. Donations can be made in US or Canadian and donations of $10 or more US will receive a charity receipt.

Now, on to the Den of Thieves. 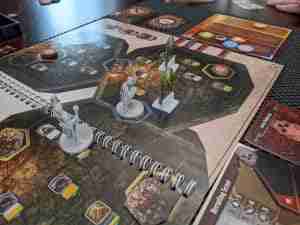 Wow was that a close one. We’ve never had a game of Jaws of the Lion that was this close, one that could have gone either way for so many turns. The last few turns of this mission were a total roller coaster of emotion. It was like everything that could go wrong did. If there was one card in the deck that would ruin our plans, that’s what we would draw. But then when it came to the monster turn, the only way we could survive was with a miss, and a curse would be drawn. I couldn’t believe how many turns went on like this.

In the end, how did it turn out? Well, you are going to have to watch to find out.

As for the scenario, it was a solid one. It has been a bit since we’ve seen a destroy the objectives mission and this one proved to be interesting. The “twist” here was the volume of enemies out on the board. There were just so many baddies that it was hard to actually get to the things we needed to destroy. They weren’t weak enemies either. I have a newfound hatred for Rat Monstrocities that just may rival my hated for oozes in the original Gloomhaven.

While we are currently taking a short break, you can usually join us Friday nights at 9pm Eastern (New York/Toronto) on Twitch where we record these Gloomhaven actual plays live!