In this live play video, we play through Scenario 9 of Jaws of the Lion, Explosive Evolution. We are playing at scenario level 2 with two players. Our characters are the Red Guard and Voidwarden.

We ran into some very ambiguous rules in this actual play, watch to find out how we decided to handle these Jaws of the Lion rule issues.

Thoughts on Jaws of the Lion scenario 9.

I really was not expecting a second boss fight. That’s two in a row. 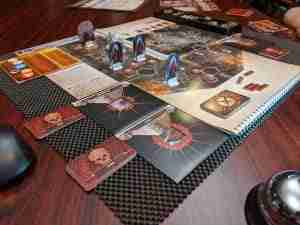 The cool part is just how different this fight was from the last boss fight. Having evolution in the title of this scenario fits very well. Not only was this a new type of boss fight but there were some new mechanics added to the game that I’ve never seen in Gloomhaven before. While this was cool it did lead to some problems.

This is the first scenario where you need to mark when an enemy dies, by leaving its base on the map. The rules for the scenario state that a hex with a base in it is “neither empty nor occupied” and this leads to some confusion. Can you move through one of these hexes? Do the Zealots drop gold when they die? Can you end on a hex with a base? What do you do if you then need to spawn a new monster on a space that’s occupied by a base and a character?

This was the first time playing Jaws of the Lion that I had to break out my phone and look up some rules. I was hoping to find an official FAQ for this scenario or at least an answer from Isaac on BGG but found neither. What I did find is that we weren’t the only ones that found these rules to be ambiguous. There are multiple threads on BGG and Reddit about this particular scenario with no true consensus being reached.

After how great a job Jaws of the Lion did with onboarding new players I found it very disappointing to run across rules issues like this. This is the kind of thing that should be covered right in the glossary. It’s also worth noting that this is a scenario every group is going to play through and every group will be running into this same ambiguous rules issue.

To find out what we ended up ruling you are going to have to watch the video. If you do, I would love to hear your thoughts on what we decided was the right way to play.

Remember we record these actual plays live on Twitch. So be sure to join us Friday nights at 8:30pm Eastern (New York/Toronto).