Back on the farm – Another look at Agricola 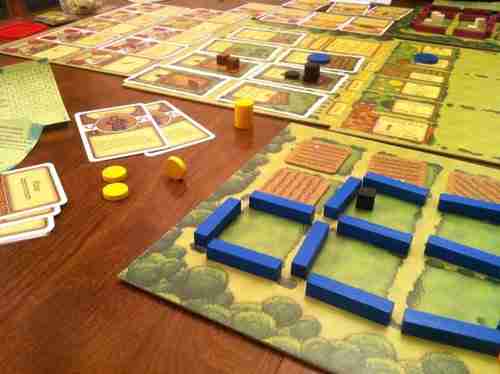 Last week I took a look at Power Grid. Which at one time was #1 on BoardGameGeek. This week I take a look at another game that was once the number one game in the world. That game is Agricola.

Each #ThrowbackThursday I’m taking a trip back in time, bringing back a review I wrote many years ago.

Below you will find an original review with only very minor editing. I’m trying to keep the feel and tone of the original post. I’ve kept any pictures I used in the initial review as well. I will, at times, insert comments, you will find these in [square brackets]. At the end of the original content, I will follow up with some current thoughts on the topic.

You can also listen to Sean and I talk about this re-review on our podcast: Tabletop Bellhop Podcast Episode 16 #Shelfie

review from 2009. What caught me was the first line. So how does the current number 1 game rate? That right there had me hooked. Before even re-reading the entire review I had copied it over here on The Tabletop Bellhop Blog. I knew it was the perfect follow up to my review of Power Grid, which was also ranked number 1 at one time.

So how does the current number 1 game rate?

each player takes on the role of a farming family. They each start with a plot of land and a basic two-room house and need to expand from there. The winner is the player with the best farm after 14 Rounds. These are broken into 6 stages, and at the end of each stage there is a Harvest Phase where farmers reap what they have sown, animals give birth, and players need to feed their family members.

Each round, players take one action for each family member. The available actions are all shown on a central board and players choose them by placing a large chit over them. Once an action has been chosen by one player it cannot be chosen by another [aka basic worker placement]. The actions vary wildly and include, but are not limited to: taking building materials, going fishing for food, building a new room on your house, improving the materials of your house (from wood to clay to stone), building fences, buying animals (sheep, pigs and cattle), building improvements, and more.

There are two ways to play, Family or Regular. Regular play adds Minor Improvements and Occupations to the game. Players each start with a hand of 14 cards that can be played during the game (by choosing the right space on the board). These do a variety of things and there are over 400 of them included in the game to ensure that no two Regular games play the same. [The Family game is the same but omits these cards].

[Agricola, ] reminds me of a mix of Princes of Florence

and that’s a really good thing. The basic mechanics are excellent and very easy to understand in a short amount of time (even if they are hard to explain). [Worker placement] is one of my favorite mechanics, and this game does it well.

The theme is very accessible and I think this would be a good gateway game because of it. [Wait, Agricola a gateway game? What was I thinking?]

The components are all top notch with nice wooden bits. A nice touch was the inclusion of enough zip lock bags for every single bit in the game. We have played this game 6 times and every time I have used a slightly different strategy (and won or tied in 4 of those 6 games) which is great to see. There is obviously no ‘one way’ to play and win. It’s actually surprising that number of different ways you can approach play.

This is also a fairly short game, lasting only an hour or two [oh, the days when I considered 2 hours a short game]. This is great for a game with this much depth. The huge amount of cards included mean that you could play this game a nearly infinite number of times without the same combination coming up.

With all the nice wooden pieces for everything else, I don’t understand the decision to do food as a cardboard die-cut chit. Why wasn’t food just another cube, maybe green or something else not used? [This was written before the game started to include Animeeple. So they replaced the animal cubes with shaped ones but actually still kept the tokens for food]. 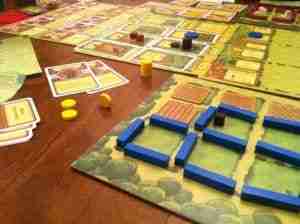 Here is something I do not understand: each player has a field card and the backs of these are all different. One of them shows an example of a [completed field], that makes sense. The rest have various backs, supposedly for storing the various bits, though if that was the case why wouldn’t they all be the same. Some have pens on them for holding resources and some do not. It’s just not logical. [According to the rules these were included to help you teach the game]. I like the concept of including an example on the back for explaining the game, but never actually found it practical, plus it just doesn’t make sense that it’s not consistent.

Okay we have now played 4 games with the Regular rules and tried all three of the different decks provided in the main game (The E, I and K decks). In each case, there seemed to be players with ‘good hands’ and players with ‘bad hands.’ This means that the cards add a rather high level of randomness to the game that greatly affects a players chances of winning. The Family game is very player vs player and highly strategic, this element seems to be lost with the cards. Now personally I liked the feel the cards added and I liked the random element (trying to still win with a [bad] hand I found a challenge), most of the players I played with hated them, and would have rather played the Family Game.

Overall I have to say this is a really good game. An excellent game actually, one of the best I own. But it’s not number 1. I can’t see how a game with such a wildly random mechanic as the Occupation & Minor Improvement decks can be considered the best in the world. I still recommend picking this one up or getting in a game at a friend’s but I still prefer some other games like Power Grid and Puerto Rico more than this.

That was an interesting read. It seems that I have a thing for thinking that number 1 games don’t deserve that spot (with Power Grid being the exception to that rule).

I also find it surprising that I don’t reference the Misery Farm meme at all. when I wrote this, I don’t think I had quite figured out how brutal Agricola can be. If you make some early mistakes you are going to have a really hard time feeding your family. It can be agonizing trying to figure out how to make any progress in the game. Due to this people started calling it Misery Farm. I’ve called it that myself. It can be punishing.

As for the Occupation and Minor Improvement Decks, I never really changed my mind on those. I did find that some of the later ones were more balanced but I always preferred just playing with the Family Rules. It feels like a more pure experience.

Here’s the important thing though. I basically don’t care about this game anymore. I haven’t played my copy of Agricola in more than 8 years. The last time I dusted off my copy was in October 2010. I still think of it as a good game, even a great game, but there are better games that do similar things that I enjoy more. The big one being Caverna The Cave Farmers

Caverna is basically a complete overhaul and reworking of Agricola, by the same designer. The random cards are gone and worrying about feeding your family is gone. Instead, you have a clan of Dwarves and you are trying to improve their mine and the grounds outside it. You are now worried about going on adventures and leveling up your family instead of keeping them fed. Not only do I think it’s a better game mechanically, but the theme is way cooler.

I’m not the only one that thinks this either. Caverna is currently ranked number 17 on BGG overall.  Agricola, on the other hand, dropped to 20 overall. Still very high, but not quite as high as Caverna. I do still own Agricola. It’s easier to teach and quicker to set up than Caverna and I sometimes think I may play it again. Thinking about now, as I write this, I probably should have Agricola into our Extra Life auction last weekend.

. This is a very condensed streamlined version of Agricola that is for two players only. It’s one of those great small box two player games my wife and I bring on trips or out to the local coffee shop. It gives you that heavy farming game feel in a much shorter timeframe and with a much smaller footprint.

So have you played Agricola? Are you still playing it?