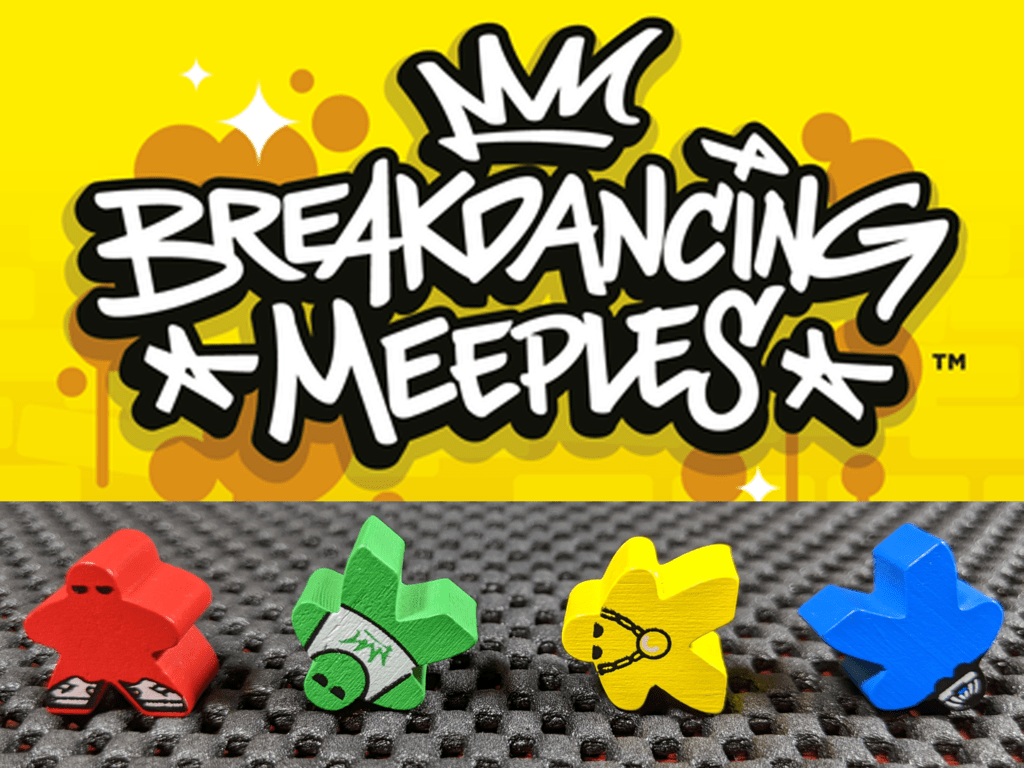 The board game Breakdancing Meeples is pretty much exactly what you expect it to be. It’s a game where you try to complete dance routines by rolling a set of wooden meeple. Along with this, you get an interesting card drafting mechanic to add some much-needed player agency and choice.

When I first saw Breakdancing Meeples I couldn’t help but think, “How is it that it took until 2020 for someone to publish a game using meeple rolling as it’s core mechanic?”.

Disclosure:  I received a review copy of Breakdancing Meeples from Atlas Games, no other compensation was provided. Some links in this post are affiliate links. Using these links doesn’t cost you anything extra and it helps support this blog and podcast. As an Amazon Affiliate, I earn from qualifying purchases.

What do you get with a copy of Breakdancing Meeples?

Breakdancing Meeples was designed by Ben Moy and features art by SixAbove. It was published in 2020 by Atlas Games. This filler game can be played with two to four players with a full game taking well under 10 minutes.

For a good look at what you get in the tin for Breakdancing Meeples be sure to check out our unboxing video on Youtube.

The first thing to note here is the fact that this game comes in a small tin container and not a box. I have to admit this is not something I’m a big fan of. Games in tins never seem to fit well on a game shelf with other games. So, I personally would have much preferred a regular board game box. 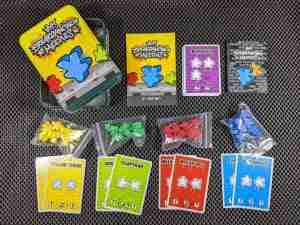 Inside the tin, you will find a full colour, ten-page rulebook, that was significantly longer than I expected. That said this game is still dead simple. You can read the book in a matter of moments and get playing almost right away. It’s just more than I thought I would find in a game about rolling meeple.

Along with the rules you get six wooden meeple and six wooden cubes in four different player colours. Each team features unique heat-transfer printed artwork on the meeples which I thought was a cool touch.

Then there are the Routine cards. There are thirty-six of these, including eight starter Routines (two in each player colour, including great names like Walk the Baby and Claptrap), nineteen advanced Routines (including Fresh to Death, Bullwinkle, and House Party), five Rally cards (used to modify existing Routines) and four Matching Pair cards (these take up a Routine slot but give players more options with their meeples).

How to play Breakdancing Meeples

Gameplay in Breakdancing Meeples is dead simple and was pretty much exactly what I  expected when I first heard the name of the game. 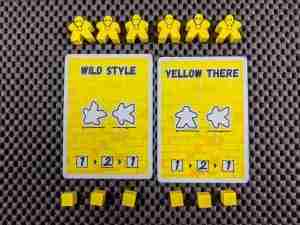 Each player picks a colour and collects the two starter Routine cards in that colour. Each of these starter cards shows two meeple on them, with the meeple in different positions, either on their heads, standing up, or on their sides. In addition, there are three scoring spots along the bottom of these cards.  Despite the fact that each team’s starter cards have unique names the actual meeple positions and scoring is identical.  There isn’t any mechanical asymmetry here (a missed opportunity in my opinion).

Each round of Breakdancing Meeples you start a 1-minute timer and all players simultaneously start rolling their meeples (like rolling dice). If a meeple lands in a position that’s shown on one of their Routine cards the player may place that meeple on that card. Meeples can be rolled and re-rolled any number of times.

When a player is able to place all of the required meeples in the proper positions onto one of their cards they must call out the name of the move they just completed and place a scoring cube on the track at the bottom of the card, filling the scoring spots left to right.

The player then gets the meeples that just scored back into their active rolling pool. Note that players only get six scoring cubes and if you run out you can’t score any more Routines. While this won’t be an issue the first round it can become one in later rounds (you’ll see why in a moment). 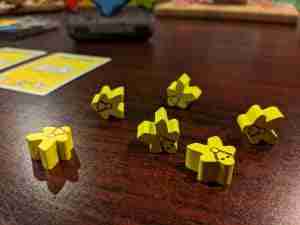 As noted earlier the various meeple positions include: standing up, on their sides, or on their heads. Meeples landing on their backs are lazy. They aren’t dancing and are useless to the player.

Once the timer runs out, players get one last chance to place any meeples that have already been rolled. Then all players calculate their scores by removing the cubes they placed while dancing and adding up the points shown under them.

Next comes the Remix Phase. It’s here that Breakdancing Meeples gets much more interesting.

A number of cards are drawn from the Routine deck equal to the number of players plus one. Players then draft these new Routines in order of score from lowest to highest. This is a nice catchup mechanic for players falling behind, they will get the first choice of the new Routines. 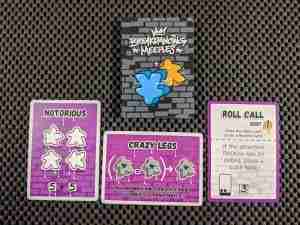 The Routines from the card deck are all more complicated, requiring more meeples than the player’s starting Routines, but are also worth more points. In addition to new moves, some of the cards in the deck are Rally cards. These act as upgrades to existing Routines and are tucked under a Routine that a player already owns when taken. Taking a Rally card costs the player one point but gives them a new way to score.  These include things like getting bonus points if the attached Routine has two or more cubes on it at the end of a round or for having three different Routines with at least one cube on each of them.

Finally, the deck also contains four Matching Pair cards. Taking one of these takes up a Routine slot but allows a player to trade in any two dancing meeples in the same position for a meeple they can place in any position. Remember: meeples that are laying down aren’t dancing.

One final important note about the Remix Phase is that players can only ever have three Routine cards. This comes into play once you get to the third round of play where most players would be drafting their fourth Routine. Now those players have a choice. Do they get rid of one of their easy but low scoring beginner Routines, or do they just swap for a new harder Routine?

The game continues for a total of four one minute rounds. At the end of the fourth round, the player with the most points wins.

Atlas Games has published a free companion app for Breakdancing Meeples that not only provides a timer that counts down while playing a breakdancing beat but also a built-in score tracker. The app also has the added bonus of figuring out the drafting order for the Remix phase as well.

What did I think of the meeple rolling game Breakdancing Meeples? 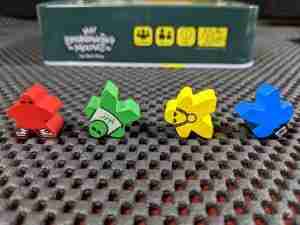 The basic meeple rolling mechanic is pretty brilliant in a “why didn’t I think of that” kind of way. I actually know a game designer, Daniel from the Everyday Board Games Podcast, who was working on his own game that used this concept of the rolling meeple and filling slots on a card. While I’m a bit sad for him that Ben Moy and Atlas Games got to it first, I’m still really shocked that it took this long for someone to publish a game using meeple rolling.

While I knew what to expect from Breakdancing Meeples as soon as I saw the game, I wasn’t expecting the very well designed Remix Phase. It’s that phase that makes this game for me.

Getting to draft new Routines after each round, and being faced with the hard choice of which cards to keep and which to get rid of after round two, makes you feel like you have some actual control over your destiny in this very random game.

Then there’s the added option of buying any Rally cards that come up and the choices those add to the mix. Finally, you have the Matching Pair cards. Taking one of those may mean you can score your existing cards more often but it also means that you only have two Routines to score with. 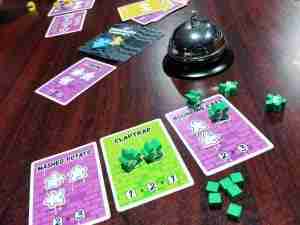 Overall I had more fun than I expected with Breakdancing Meeples. It started off being exactly what I expected and wanted, but then added in some depth with the card drafting in later rounds. If you are looking for a quick filler game that has solid table presence, one that will get people laughing and interacting, you should check out Breakdancing Meeples.

If you aren’t into light silly filler games, this one isn’t going to win you over. For me, I dig Breakdancing Meeples. I’m looking forward to when the pandemic is over and I can break this out at public game nights, where I’m certain it will be a big hit.

While I do love playing an epic game that burns my brain, now and then I enjoy something quick, light and fun, like Breakdancing Meeples. It’s a great way to start off a game night, wrap one up, or as a time killer between games. What I would like to know is what’s your favourite game to fill that niche? Let us know what your favourite filler game is in the comments below!
Related Posts