You are here: Home / Reviews / The Gaming Panels of Breakout Con

While I spent more of the weekend socializing, networking and gaming, Sean spent most of his time attending Panels. After the event was done I asked Sean if he would be willing to share some of his thoughts on the panels of Breakout Con. This blog post shares his thoughts in his words:

I had the pleasure of attending a great number of the panels presented by Breakout Con this year for The Bellhop and was truly impressed by the wealth of information, diversity and inclusiveness presented at all the sessions I was able to attend. For board games, they covered topics as diverse as addressing the beginnings of board game design, right up to getting those games to market, as well as a look back at important games of the past and general information on the wildly confusing lexicon of modern hobby board games. Additionally, on the RPG side topics on running, publishing and designing were all covered in various forms.

Overall, I felt the panels were an informative mixture of both presenters and topics and well worth attending. That isn’t to say they were without problems, however. Foremost in the problems was their location. While well signed and easily accessible, it was “off the beaten path” enough that I feel not as many people attended, as would have, had it been in a more central location and not on a separate floor from all the other activities. Out of sight, out of mind.

Once one found the panels and made the choice to attend them, one was certainly greeted with a wealth of information, a capable sound reinforcement system, and comfortable chairs and room environment, for each panel. Seeing the panellists from the very back, had it been crowded, might have been a problem but hearing them wouldn’t have been.

The panels were each about 55 minutes and all recorded for, what I assume is later distribution in podcast form (in previous years they have been distributed on the RPG Design Panelcast. )

The initial panel was on “Getting Your Game to Market” and focused on board games but with a bend towards mainstream publishing rather than self or Kickstarter publishing. Doreen Dotto and Daryl Andrews were the presenters and they gave a brief overview of their experiences in getting those games launched by mainstream publishers, in the time allowed.

Daryl, a prolific designer and developer, was well spoken and informative on the topic, but Doreen, whose games are of a much more scholastic orientation seemed a bit out of place in the convention with a very different experience from what most hobby game designers will likely experience. Being the very first panel on a Friday afternoon, it also may have suffered from a poor time slot and might have been buoyed up by a different crowd.

The next Panel, moderated by Daryl Andrews from the previous, featured the opposite end of the board gaming experience, talking about “The Beginnings and Basics of Boardgame Design.” This was a more lively discussion with three panellists, (Allysha Tulk, Nikki Valens and Shannon McDowell) They all spoke very well and energetically about the topic and covered a lot of the points we here at the Tabletop Bellhop have discussed at length on various episodes, including proper and thorough testing, manual designs and, the key theme of the panel, “Fail Faster” (encouraging people to do the minimal work to get the concepts onto the table and determine if they have merit, before spending too much time on a project that may be doomed to fail). The only fault I could find with this panel was that Daryl, as an excellent designer, felt more like a fourth member of the panel than a moderator.

This last comment I found was a recurring thread in many of the panels and might be something worth addressing by the convention. In many cases, the moderators were too close to the topic of the panel and ended up speaking with authority in addition to the panellists, rather than guiding and moderating the panel for the benefit of the audience. While certainly informative for the audience, it means the panellists each get slightly less time as a result.

The next panel I attended was “What Can Art Do For Your Game” Which was a delightful discussion with two accomplished artists who really know their stuff, Shel Khan & Emily Griggs, moderated by Jonathan Lavallee. They spoke in detail about the process of getting and working with artists, both as designers and artists. Their insights on how to communicate with your artist(s), layout design and entire art team were well worth hearing by anyone looking to purchase or coordinate on art for their projects, board game or RPG.

The next panel had an interesting title, “Designing Asian Themes in Board and Roleplaying Games” I wasn’t quite sure what to expect, but Banana Chan, Sharang Biswas, Agatha Cheng and Moderator Daniel Kwan made for a lively, and interesting panel, with the addition of James Mendez Hodes who wasn’t sure if he was supposed to be there but joined in a lively and captivating talk on diversity and inclusion. I don’t know if the topic was covered, but the discussion was unquestionably a valuable one for anyone who listened. This is one panel I’m glad went a bit off the rails, as I think the topics they ended up discussing were more important and valuable to the community.

The last panel of day one was Boardgame Playtesting & Development, and sadly, I felt this was the weakest of all the panels I attended over the weekend. Andy Kim, Erica Hayes-Bouyouris, Pam Walls and moderator Nicole Hoye were all knowledgeable and qualified on the topic, but the lack of strong moderation allowed some people to overwhelm the panel, and, rather than being as generalized as I would have wanted the discussion to be, quickly shifted to a very large metropolitan area focus, as well as engaging the services of game developers to oversee things, rather than discussing how to go about it.

Overall, an interesting day of panels, but ending on a stronger note might have improved my overall impressions.

On Day 2, I started with “Running a Good Con RPG” with panellists Camdon Wright, Angela Murray, Chris Spivey and moderated by Senda Linaugh. Now to be fair, I’m somewhat familiar with all of these people to a certain degree, but I think their advice and interplay on the panel was certainly valuable to current and potential DM/GMs looking to either continue or start off their convention career. How to handle both story, time and players were all covered in an information packed 55 minutes.

Next up was “Board Game Lingo”. Now, as co-host here on Tabletop Bellhop, with Episode 9 – Under The Hood which goes through a massive list of lingo and mechanics, I was interested to see if I would pick up anything new and evolve my knowledge. This was, of the panels I attended, the one with some big media names on the panel with Teri Litorco, Mandi Hutchinson and Helaina Cappel being moderated by Daryl Andrews.

Now, to be fair, Daryl had a lot on his plate with this one, and I think he handled it quite well and kept things running on a topic that could have easily gone far, far over time. I do feel a bit sorry for Helaina here as she seemed a bit overshadowed by the powerful personalities of Teri and Mandi, but, she certainly knew her stuff, even if she didn’t get to express it as much as she might have. I felt Teri was a bit out of place here on a panel specifically describing board games, as every time she spoke, she redirected the topic to its application in tabletop miniature games. Not that the topics aren’t applicable, but it essentially re-hashed each term over again, but for how it applied to miniature games. Not invaluable, but it detracted from the amount of time that could have been spent on more lingo.

Next up Jennifer Adcock hosted the “Online Tabletop Gaming” panel with guests Stephanie Bryant, Harlan Guthrie, and Jo Fallak. This was a fun panel, quite entertaining, but I don’t know that I learned anything. My takeaways were that Roll20 is a place I can play online games and the stream that Harlan and Jo run is fun. I’m not sure what I was expecting from this panel, and I really did enjoy it, I just don’t know that I was educated. (and I admit frustration that there was no mention of any other type of tabletop games other than RPGs).

The final panel I was able to attend was “Top 10 OLD Games Board Games Everyone Should Play” featuring Daryl Andrews, Jon Gilmour, Erica Hayes-Bouyouris, John Butterfield and Moderator, Nicole Hoye. Now, this was another fun panel, and I found myself nodding pretty much constantly at the suggestions given by each panel member as they discussed their own personal lists for top 10 old games that should be played as a designer (the title was a bit misleading). Again, this one was pushing the time limits, but Nicole did a delightful job of keeping the panellists in line and on schedule. My only complaint would be that the panels’ idea of “old” was a bit questionable, with games from as recent as 2013 being brought up, but the list itself was well worth hearing, and the reasoning was well thought out. Whether it was because of mechanics, theme, style or originality, clear and logical points were given as to why each game was included on the list. Podcast favourites like Power Grid and Bohnanza were mentioned, as one might expect, as well as old favourites like Carcassonne and more.

I wasn’t able to make any of the Sunday panels, although I did hear great things about the Diversity at the Table panel, and am certain that Chris Sneziak must have run an excellent panel for Podcasting 101.

Overall Thoughts on the Panels of Breakout Con 2019

My takeaways from the panels at this event, and suggestions to those overworked con organisers, are as follows. Location, Location, Location. Space is always at a premium, no question, but moving something like the D&D marathon or the 18XX sessions more out of the way, might have made more sense than the panels. When you have such a fantastic guest list, make sure you do everything you can to encourage people to learn from them. Next would be moderation, I understand that there is a certain respect and honour to being the moderator for a panel, but I feel like some panels might have been better suited to having a more skilled moderator, rather than someone simply related to the topic as moderator. Someone focused on moderation and time and engaging the audience would also allow the con staff in each room to worry a bit less about timing and flow.

Overall though, Breakout Con had an incredible list of guests providing a wealth of information. Especially notable is the lack of describing any of the panels by race or gender of panellists. There is no question that the panels continue the overall theme of inclusion, accessibility and equality in gaming. And as a result, I look forward to returning next year, both to support, and enjoy what Breakout Con has to offer. 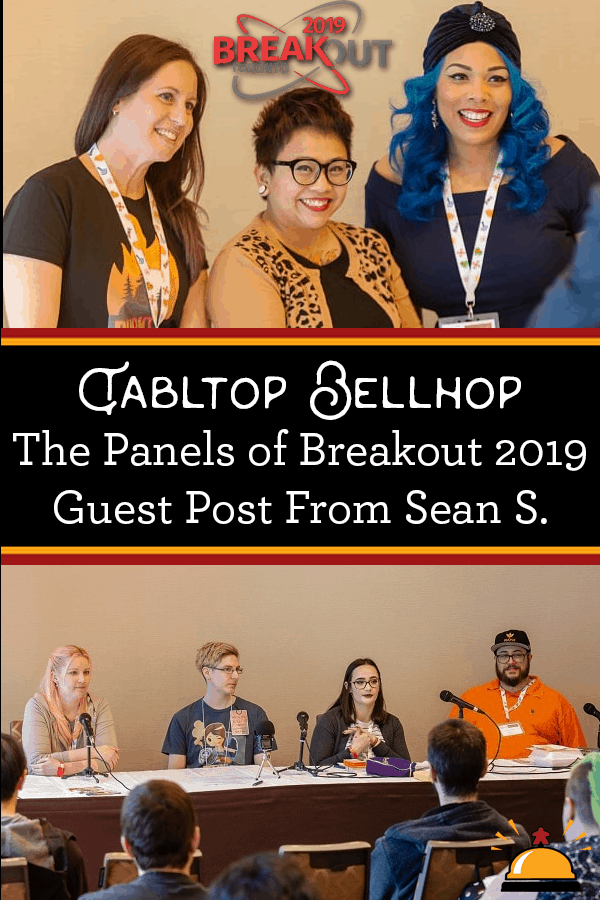 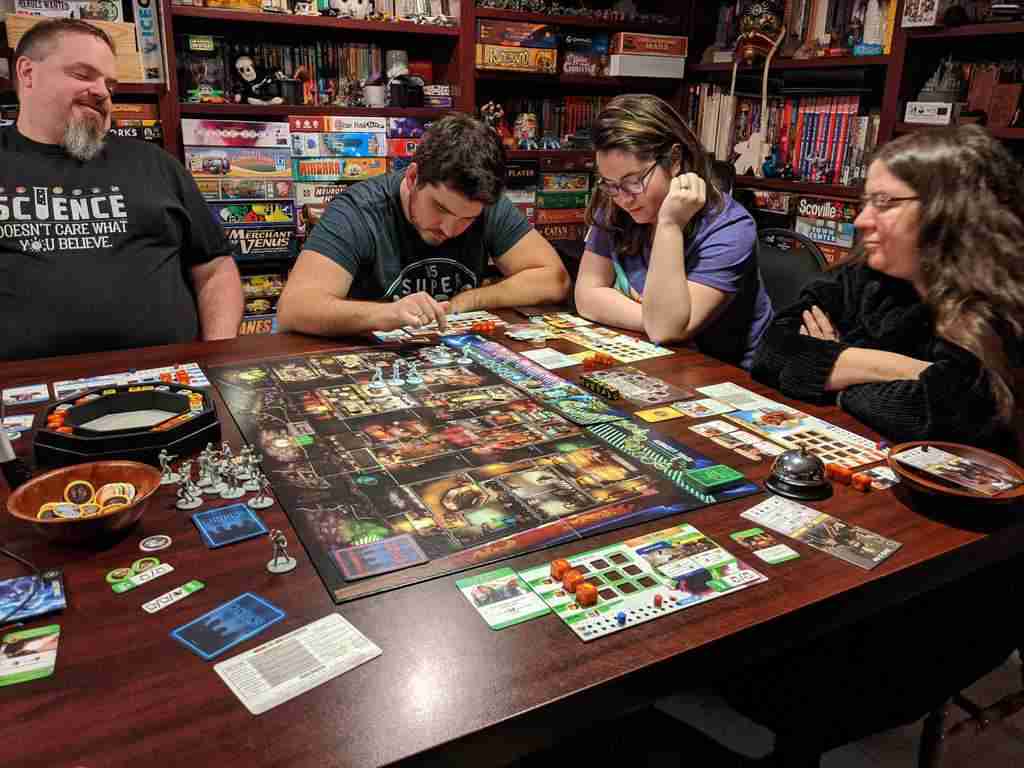 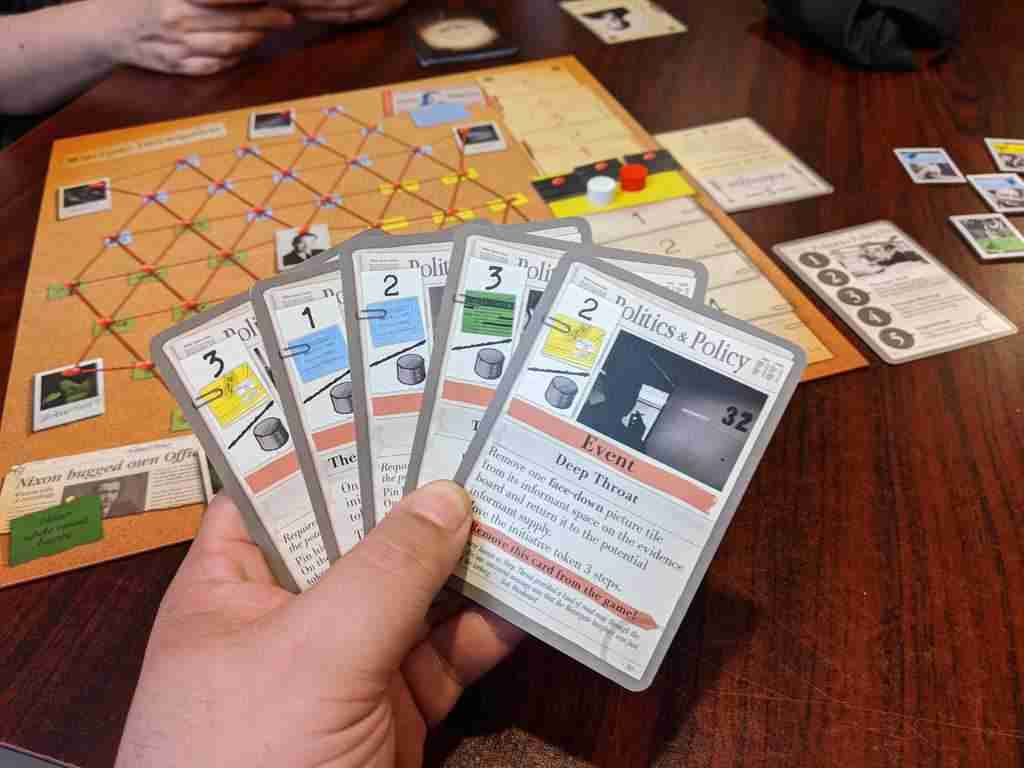 Watergate, a two player tug of war board game based on the historical Nixon scandal