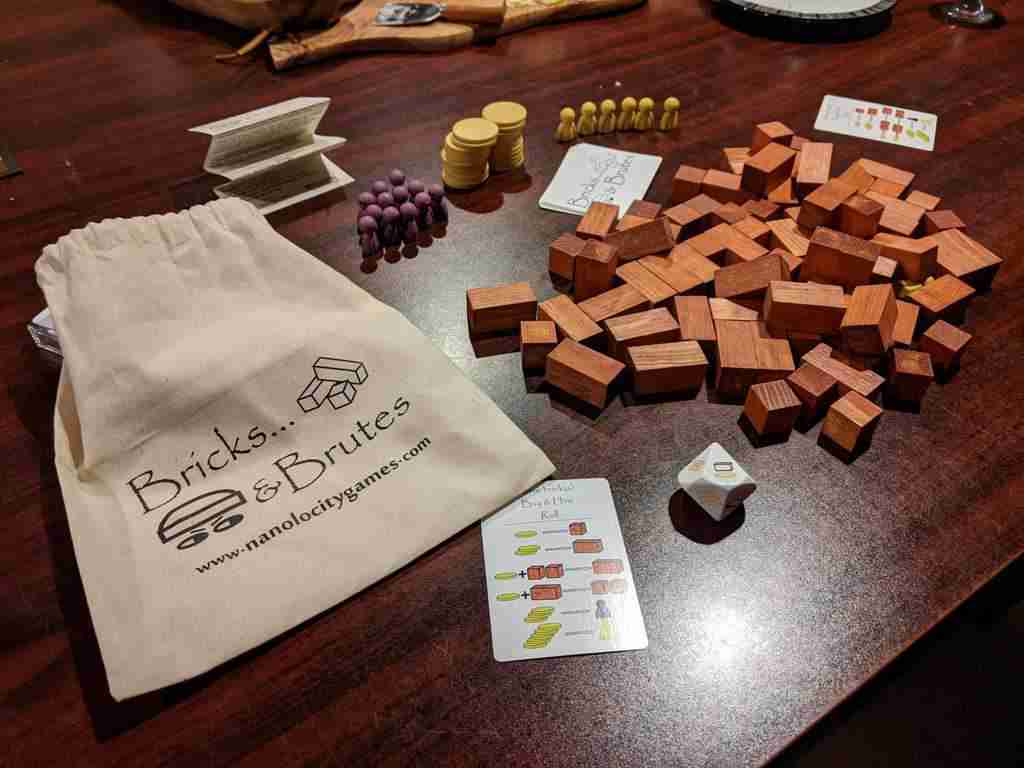 Bricks & Brutes is a light, filler, take-that, fantasy-themed game for kids ages six and up. In Bricks & Brutes, players are competing to be the first to build their section of the castle walls to the queen’s specifications.

While building, players will need to watch out for raids from the other players’ brutes as well as making sure they have some form of defence from the dragon because it’s hard to build walls without masons.

Disclosure: Nanolocity Games was cool enough to send me a review copy of Bricks & Brutes.

What do you get with a copy of Bricks & Brutes? 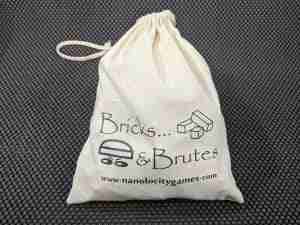 Bricks & Brutes was designed by Michael Ott. This kids’ game was funded through Kickstarter in 2020 and is being self-published by Michael under the publisher name of Nanolocity Games.

This wall-building game is designed for two to four players aged six to thirteen. An average game takes under half an hour.

The components of Bricks & Brutes is one of the main draws for this game. When you get a copy of this game in the mail you don’t get a box, other than the shipping container.

This container is stuffed to the brim with wooden blocks in two sizes, yellow recycled-plastic mason pawns, purple recycled plastic brutes and a bunch of yellow recycled plastic gold coins. There’s also a small cardholder that contains the rules of the game, wall cards and reference cards for each player. Finally, there is a larger than usual custom ten-sided die with etched symbols on each side. 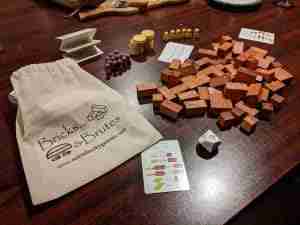 Under all of this is a cloth bag, that becomes the “box” for the game once you’ve unpacked it all.

All of the components are of excellent quality. I especially appreciate the use of recycled plastics for the pawns and coins. I’m also a fan of the happy face added to each of the masons and the frowns on the brutes. I also appreciate that the die is etched and not just silk screened or heat transferred. 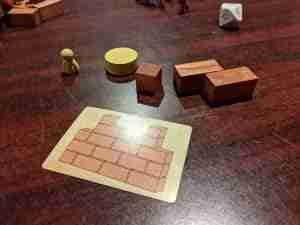 At the start of a game of Bricks & Brutes, each player takes one yellow mason, four coins, one small brick and two large bricks.  A ransom wall pattern is given to each player. The youngest player starts the game.

Each turn the players go through three actions:

When building the wall players are trying to match the pattern on the wall card they have.

When shopping, in addition to buying bricks, players can also trade in one of their bricks plus a coin for a different type of brick.

The die of fate has ten sides on it. Most of the sides give the player one or more bricks in one or both of the two sizes and or a number of coins. In addition, there are three special events that can happen, the dragon, the queen and the brute.

When a player rolls the Dragon, the active player picks another player and eats one of their brutes. If the target player has no brutes the dragon eats a mason. A player without a mason can’t build and will need to save up five coins to replace that worker. 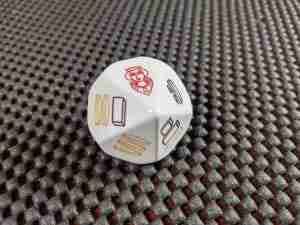 When a player rolls the Queen event, the Queen changes her mind on how she wants the walls to look. Players all pass their wall cards to the right.

When a player rolls the brute, if they have any brutes they gather them all up and pick a player to attack. That player then takes all of their brutes and both players “roll” all of their brute pawns. Brutes on their stomach count as nothing, brutes lying face up count for one point, and any brutes who land standing up count for two points. If the attacker has more points than the target they get to steal a brick from the other player.

Play continues around the table with each player taking the three actions in order until a player completes their wall and it matches the wall card they currently have.

Bricks and Brutes is a light “take that” game that kids enjoy. 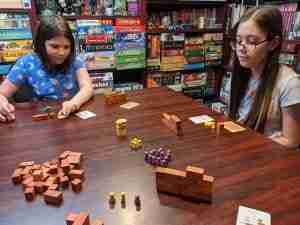 When Michel Ott, designer of Bricks & Brutes, first approached me about doing a review of his game I took a quick look on Board Game Geek and the Kickstarter and thought it looked interesting. At the time all of the pictures of various wooden walls with pawns standing on them made me think of Crossbows & Catapults, a game I remember fondly from my childhood. That was a big part of why I agreed to check this game out.

I’m sorry to say that this is not a modern Crossbows & Catapults. Actually, it’s not a dexterity game at all. One of the first things I noted when reading the rules is that there’s no mechanic where you actually place your pawns on your walls anywhere. So the pictures you see online showing this is just people trying to take good looking pics. Though I do have to admit one of my kids while playing did tend to stack her workers on her wall.

Okay, so Bricks & Brutes isn’t a dexterity game. Then what is it? It’s a rather light, highly random, take that game. It’s dead simple to learn and easy to teach and even my youngest daughter picked it up right away.

Despite being rather light there are some interesting decision points in the game. Deciding what to spend your gold on can be very interesting. Do you save up a bunch of gold to get a second Mason so you can build twice as quickly? That’s a great idea but not very useful if you run out of bricks due to spending all of your money. Is it worth getting a few brutes just in case you get the chance to raid or someone raids you? At least one brute is useful to have, even if it’s just to protect your mason from the Dragon. 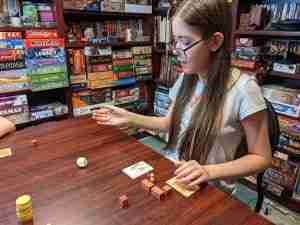 In the end, the randomness of the ten-sided fate die is going to have a big impact on any particular player’s ability to win. Thankfully the take that elements tend to prevent a runaway leader if one player does start to have a streak of luck.

My favourite mechanic in this game is the brute battle. This is only the second game I’ve ever seen that has players roll their workers like dice. The first was Breakdancing Meeples, which I reviewed back in August. Everyone I’ve played the game with loves rolling those purple pawns and looking to see how many are face up. The one problem with this mechanic is that it doesn’t come up nearly often enough. The brute symbol is only on one side of the ten-sided die. Due to this, spending all of your money on brutes seems to be a bad strategy.

I think the overall game could be improved by having a second brute symbol on the dice, encouraging players to buy more brutes as well as letting everyone interact with the fun pawn rolling mechanic more often. 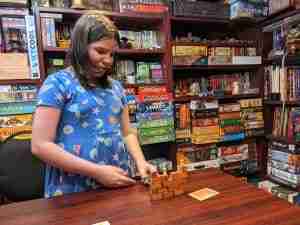 Overall this is a dead-simple game that my wife and I thought was great looking but not all that engaging. It wasn’t until my kids played that I got to see the game shine. My children really enjoyed the game. They loved stacking up their bricks, placing their pawns on the walls, and most of all the take that element of the game. They loved rolling dragons and picking a worker to eat. They liked raiding another player’s camp with their brutes and stealing a brick. They cheered when they got a good roll on the die and laughed when someone rolled something that didn’t help them.

What this means is that Bricks & Brutes seems perfect for the market it’s targeted at. No hobby gamer is going to be entertained by this for long, but their kids might love it as much as mine. This is a simple to learn, easy to play, quick game, with a great table presence due to some great components.

I’m always looking for games my kids will enjoy and that they can play on their own. I’ve talked about kids’ games in the past, but I would love to hear what the kids in your life are playing right now. Let me know in the comments!