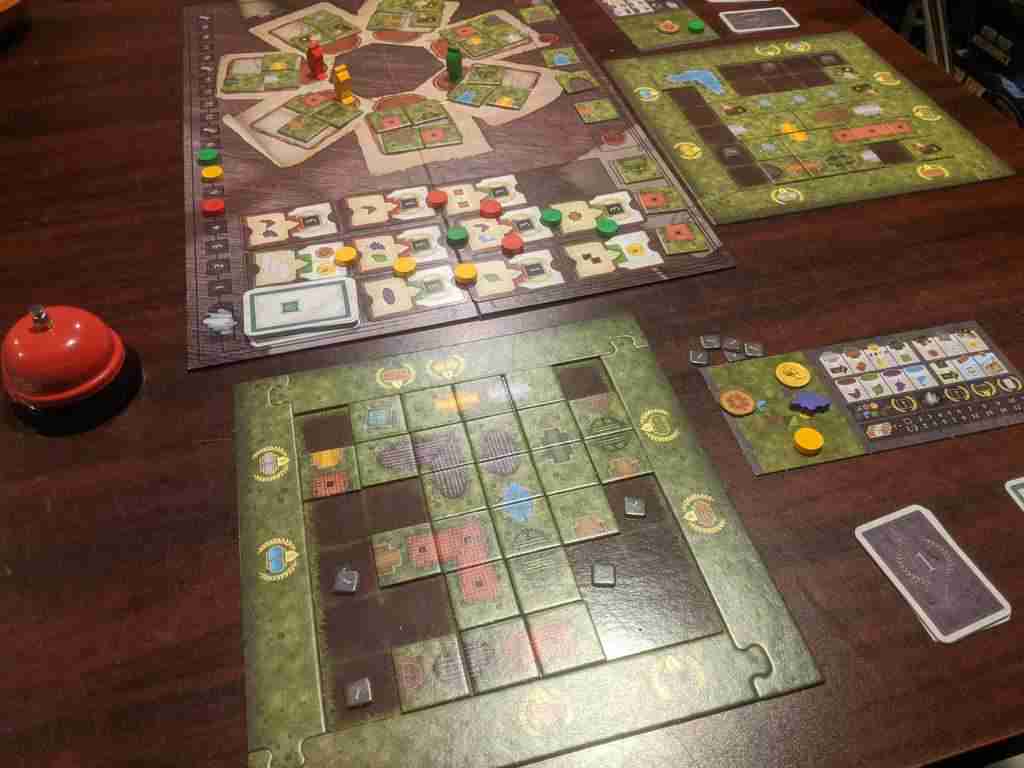 I’ll admit it, I’m a Stefan Feld fanboy. Of all the board game designers out there Stefan Feld is by far my favourite. So when I was offered a chance to review the Kennerspiel nominated Carpe Diem, I jumped at it.

Become a patrician in ancient Rome and build your own lucrative city district in this Roman themed tile drafting and tile laying game.

Disclosure: Some links in this post are affiliate links. Using these links doesn’t cost you anything extra and it helps support this blog and podcast. As an Amazon Affiliate, I earn from qualifying purchases. I received a review copy of Carpe Diem from Ravensburger. No other compensation was provided.

What comes in the Carpe Diem box? 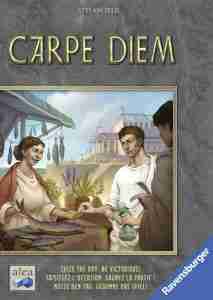 Carpe Diem was designed by Stefan Feld and features art by Lalanda Hruschka. It was published in 2018 by Ravensburger in North America. It is part of the Alea Big Box Series of games. This tile laying game plays two to four players in an hour to an hour and a half.

The best way to see what you get with a new copy of Carpe Diem is to check out our Carpe Diem unboxing video on YouTube.

Carpe Diem comes with three rulebooks, in German, French and English. The English rule book is 12 pages long, all of which are rules. It follows the standard Alea rulebook format with sidebars with quick summaries of the rules on each page. I’ve always been a fan of their format.

Inside the box, you will also find two packs of hobbit-sized cards, two baggies with wooden components and some extra baggies.

The wooden components include discs in your standard player colours: red, blue, yellow and green. There is also one rather tall Patrician meeple in each player colour. The rest of the wooden components represent resources. There are purple grapes, green leaves, brown chickens, and blue fish. I was pleased to see that these weren’t just wooden cubes in various colours.

The game also has quite a few punch boards containing all of the tiles for the game, as well as bread and gold tokens, and tiny little scroll tokens and frames for each player to place around their personal player board. These are all of decent quality.

The central player board is single sided and is a standard four panel board. It seems to be going for function over form. Finally, there are a set of four player boards and player summary tiles that also have a spot to store resources.

The cards include a deck of scoring cards with laurels of various point values on them, Fountain cards that are used for end game scoring, and scoring cards that randomize what players will score points for each game. All of these cards are those smaller half card size and of good quality. The iconography is easy to interpret and is also nice and big and easy to see from across the table.

Building a town in Rome by playing Carpe Diem 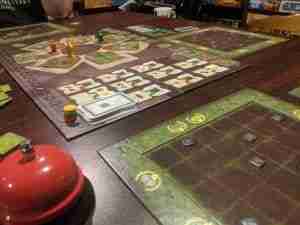 To set up a game of Carpe Diem each player takes a random player board and four random frames. They place their Patrician on any unoccupied spot on the wheel on the centre board. A set of scoring objective cards is laid out based on the number of players. Players also place a scroll token on each banderole spot on their player boards.

Carpe Diem is played over four rounds. Each round, players draft tiles from the central board and place them on their personal player board. Once all tiles are drafted, a scoring round happens and then a new set of tiles is placed on the main board and the next round is played. At the end of the fourth round, there is an additional end game scoring phase.

On a player’s turn, they will move their Patrician one space left or right around the market circle on the main board. They will then take one tile from where they moved to and add it to their personal board.

The first tile drafted must be placed on the shovel spot on their board. Each additional tile, placed on future turns, must touch an existing one. Tiles must be placed so that like features touch.

When a player completes a feature on their board they will get something for it. If they cover a scroll tile they also move up on the banderole track.

There are four different types of features on the tiles.

Fields: These are oval and give the player resources when completed. Fields can be two to four tiles long. There are four types of fields, providing fish, chickens, herbs or grapes.

Buildings: These are always exactly two tiles long. Each building type gives the player some in-game reward. Silver buildings move players up the banderole track, gold buildings let players trade resources for gold, while brown buildings provide bread, and green buildings allow players to draft a bonus tile from the row at the bottom of the main board and immediately play it.

Features: Each feature is a single tile. The bakery provides bread, the smith provides gold and the fountain lets players draw two end game scoring cards and pick one to keep.

Villas: These red-roofed tiles can be any size and feature a number of chimneys on top which are important for both in-game and end game scoring. 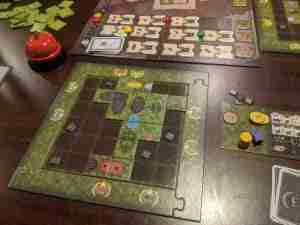 At the end of each round, players will score two objective cards. This is done in the order of how far each player has gotten on the banderole track with the highest number going first. Players place one of their tokens on a spot between two scoring cards and get points for those two cards. Once a spot has been taken it cannot be taken again for the rest of the game.

The scoring cards cover a wide variety of things, like getting points or resources for having certain building types, or for having sets of different fields, or for trading in one two or three kinds of resources, or for sets of chimneys on villa tiles, etc.

At the end of the final round, in addition to choosing two objective cards, players also go through an end game scoring round. They get points for leftover resources, points for how far up the banderole track they’ve travelled, points for all of the fountain cards they’ve collected and finally points for the number of chimneys on their completed villas.

There’s a bit more to it than that, things like the fact that bread can be used to move your Patrician anywhere and that gold is a wild resource, but I think this is enough of an overview to give you a good idea of how a game of Carpe Diem plays out.

My overall thoughts on Carpe Diem

I am a big fan of Stefan Feld as a designer and have yet to find a Feld I didn’t like, and, unsurprisingly, Carpe Diem is included in that list. 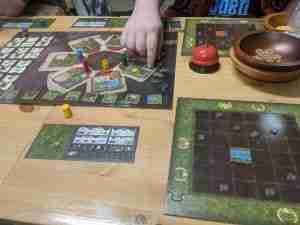 Carpe Diem is a great game. It is a solid, tile laying, point salad that everyone I have taught it to has enjoyed. This is a game that has even won over some of my non-euro loving friends who usually avoid anything that might cause a bit of brain burn.

Now the game isn’t perfect. Personally I find the artwork to be very drab and boring and some of the tiles are hard to tell apart from a distance due to poor colour choices. Also, this is by far one of the most pasted on themes I’ve ever seen in a game. The thing is, none of these complaints affects the mechanics of the game and it’s the mechanics of Carpe Diem that I really enjoy.

It’s the scoring system in Carpe Diem and the fact that it drives long term planning and strategic play that really shines for me. I also appreciate how variable and replayable this game is due to the small subset of end game scoring cards that you use. What cards come out each game is going to change and drive the way players are going to build their territories.

I also enjoy the fact that this is a heavier tile laying game than you usually see. Most tile laying games are fairly quick and simple. Carpe Diem is a step up from games like Carcassonne, Kingdomino and Isle of Skye.

Overall, I’m really digging Carpe Diem. It’s a very solid tile laying game that really rewards forward thinking. While it’s a bit heavier than most tile games it never crests that hill of actually becoming hard. Over repeated plays, this game has proven to be popular with gamers, like Deanna, who love heavy meaty stuff, as well as gamers who like quicker lighter games and that’s great to see.

If you are a big fan of  Carcassonne or similar tile laying games and looking for a next step game, Carpe Diem is a great choice. If you are already a Feld fan, just pick up Carpe Diem and you shouldn’t be disappointed.

For everyone else I recommend at least giving Carpe Diem a shot, there’s a lot here to enjoy for gamers of all experience levels.

Have you played Carpe Diem? What did you think? Who’s your favourite game designer, and what, to you, is their must-own game? Let us know in the comments.