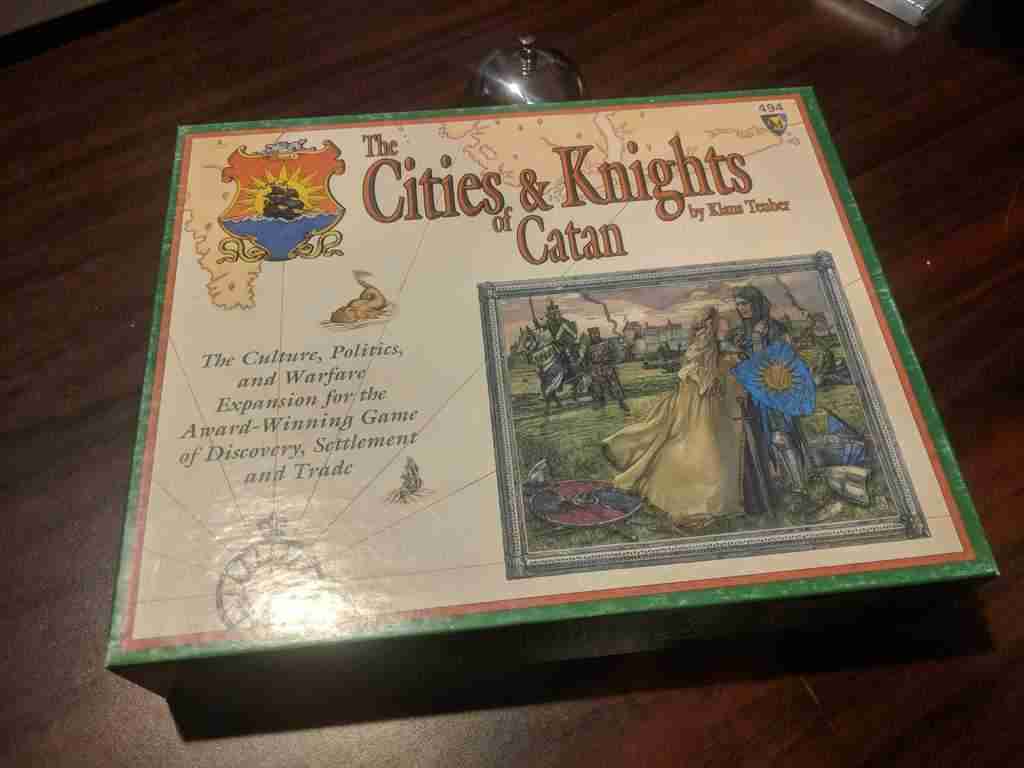 A question about Settlers of Catan was the first question I ever answered here on the blog. Our first ever podcast episode was all about Catan and the various editions and expansions.  You could almost say The Tabletop Bellhop started with Catan.

That’s why I’m bringing back this classic review of Cities & Knights of Catan for #ThrowbackThursday.

In addition to being the first game I ever wrote or talked about after officially launching the Tabletop Bellhop Brand, Catan

is still a big name in hobby gaming. It’s still as popular (if not more popular) now than it was back when I first wrote this review. There are still people entering the hobby now, through the Catan gateway. Catan came out in 1995 and is still relevant today. One of the first things people do after playing a few rounds of Catan is to go looking for more. This leads them to expansions like Cities & Knights 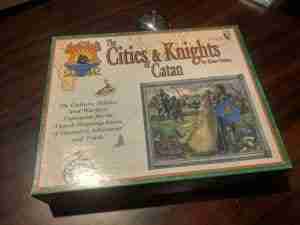 to the next level. Besides trying to just build cities and settlements you must also collect commodities (Coins, Paper, and Cloth) which you get when you have a city, [not a settlement] on the proper terrain tile [Mountains, Forst, or Pasture]. [Instead of getting two of the regular resource, you get one resource and one commodity on these three terrain types]. [Players] use these commodities to upgrade [their] cities.

Upgraded cities earn you development cards from three different decks. These cards give huge advantages like free road building, trading at 2:1, moving roads, taxing other players and more. [These three decks replace the standard development deck from a normal game of Catan].

While all of this is going on barbarians are slowly moving towards Catan. This leads to the second big addition: the knights. Players can build/feed and upgrade a set of knights. Knights can be used to scare away the robber, hold good intersections on the board, break up longest roads and a bit more. The main [thing knights are for] is defending Catan. When the barbarians arrive you compare the number of cities on the map (the barbarian’s strength) to the number of activated (fed) knights. If the knight number is higher, the barbarians are defeated and the player who contributed the most knights gets a victory point and is declared “The Defender of Catan!”. If the barbarians win, the players contributing the least knights lose a city. This adds a great new level of strategy to the game and also makes it a bit more competitive.

As usual for a Catan game, the bits are great. Well made wood pieces (though I hear the new edition has plastic [yep]), nice flip books for developments and a great border for the entire island that really helps prevent an ‘Earthquake of Catan”.

The level of strategy added is great. There are a lot more things to think about now, and it will keep you much busier than the standard game. Works well with 3-4 players and even better with 5-6 (which requires an additional expansion).

The barbarians add a great element of suspense to the game when they are getting close and no one has or has activated any knights. The development cards are great with tons of sneaky and useful cards you can get to mess with other the players and advance your own plans. 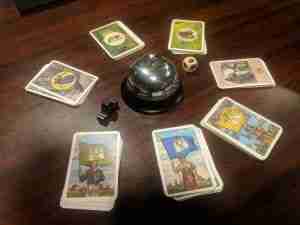 This isn’t always a bad thing, and it depends who you ask but the games take quite a bit longer than a standard Catan game. Even trying to play quickly, a game of Cities & Knights will probably take at least an hour and a half, with some games going much longer.

There is still a high random factor in this as in the rest of the Catan series, even more so in this one with the extra die (that determines if the barbarians advance or if players can generate progress cards). Personally, I don’t find this an issue, but anyone that prefers pure strategy may not like this.

Lastly, it doesn’t ‘feel’ like Catan. Sure you generate resources, build cities, etc, but it just feels different, like a different game. Whereas Seafarers just added to the basic game, this added so much it ‘feels’ different. I don’t know how else to explain it.

Really this is a great game, I don’t have much bad to say and I am really having [a hard time finding something ugly]. The only ugly I can think of is the way the players may get. This has more backstabbing, sneaking, and ganging up, then the other Catan game so if your group has low sportsmanship this could be an issue (of course I know some groups that love this version of Catan just for that reason). Just play The Spy, Followed by The Bishop then A trade Monopoly and see if your opponent is still smiling, or grabbing a knife 😉

[Cities & Knights] is a great [expansion], truly.  It builds onto Catan in many great and interesting ways. It doesn’t feel like the basic Catan game which could be a good or a bad thing. Well worth picking up as the added strategy and the drama of the approaching barbarians will likely bring you back to the table again and again.

Well, it’s been 12 years and except for the fact that I think my writing has gotten significantly better over the years, I really couldn’t have said it much better. I still feel pretty much the same now as I did then.

adds a lot of new stuff to the base game of Catan. It adds a new level of strategy and tactics as well as increasing the amount of player interaction through the new development decks and the area majority aspect of the knights. The addition of the barbarian raiders advancing towards the island adds a level of tension that is completely absent from the original game.

The big problem with Cities & Knights, which I did note in the original review, is that it changes the overall feel of Catan. At this point, I tend to think of them and describe them as different games. I will never say: “Hey do you want to play Catan and use the Cities & Knights expansion”. I will say: “Do you want to play some Catan”, or I will say “Hey let’s play some Cities & Knights.” In my head, Catan with this expansion is its own game with its own unique feel, a feeling that’s reminiscent of the original Catan but something very different. 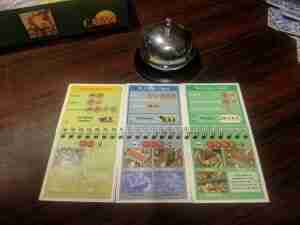 I thought it was somewhat odd that I didn’t get into more detail about the flip book or the development cards. These are key to Cities & Knights and turn Catan into more of a civilization building game. Developments are done in the three areas of Science, Trade, and Politics. You start at the lowest level in all three and by spending Commodities (those new resources mentioned in the review), you can level each of the areas in the form of city improvements. It’s kind of like a very simple tech tree. Leveling up increases the chances you will get to draw development cards in each of the three areas. Also getting any of your city improvements to level three unlocks a special ability for the player that reaches that tech level.  This is the aspect of the game that I think sets it apart from Catan.  Turning it into more of a civ style game with a trading aspect.

If you have Catan

and are looking to expand, my usual recommendation is to pick up Seafarers of Catan

first. It changes up the map by adding more islands and adds boats. Those boats basically work like roads. So the actual feel of the game doesn’t change. You just get more of it and more options, which is awesome. I only recommend Cities & Knights if you want something more competitive, a bit heavier and with many more fronts to focus on. It not only adds to Catan, it changes it.

Now to be honest it’s been quite some time since I’ve played Cities & Knights.  I will say reading this classic review and opening up my copy of this expansion has really filled me with the desire to play again. So you may be getting an updated actual play review on an upcoming week in review.