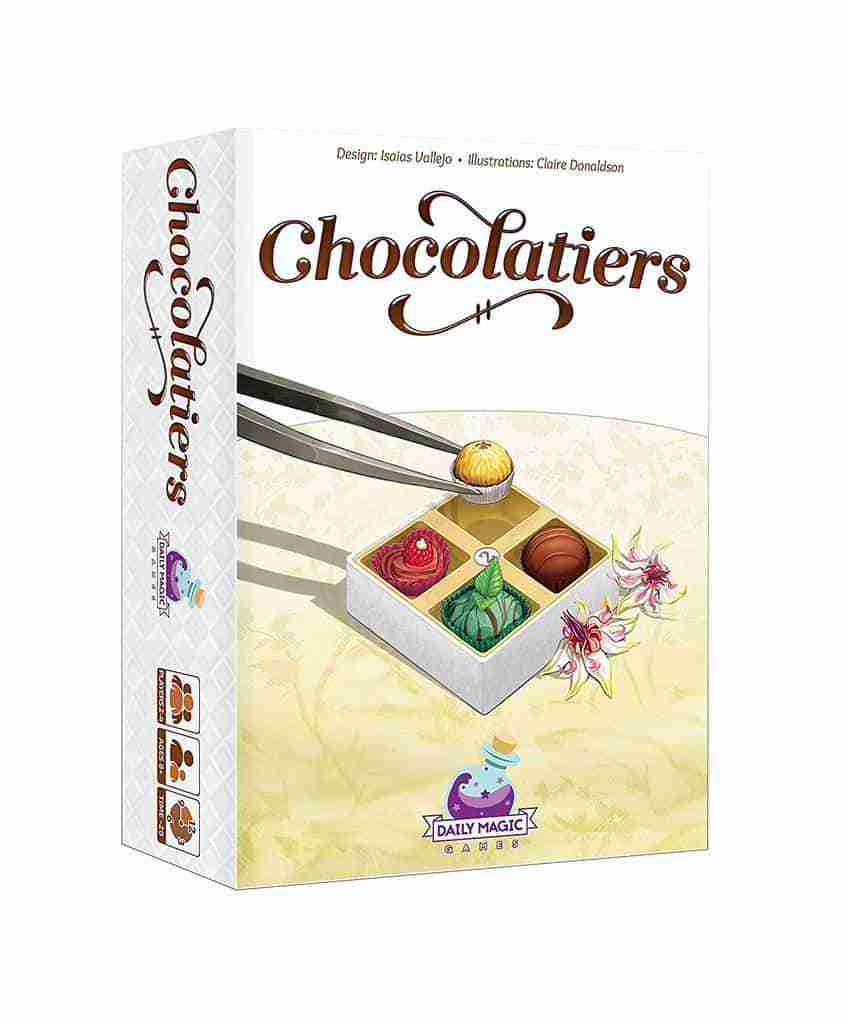 I’m a big fan of Daily Magic Games. I first tried one of their games at Origins 2016, that was Valeria Card Kingdoms. Today I’m taking a look at their latest game, Chocolatiers.

I’m a big fan of games with unique themes and you don’t get a much more unique theme than building a box of chocolates.

Disclosure: Some links in this post are affiliate links. Using these links doesn’t cost you anything extra and it helps support this blog and podcast. As an Amazon Affiliate, I earn from qualifying purchases. Daily Magic Games provided me with a review copy of Chocolatiers, no other compensation was provided.

What comes in the box for Chocolatiers?

was designed by Isaias Vallejo and features art by Claire Donaldson. It was published in 2019  by Daily Magic Games. It was originally a Kickstarter project which funded in February of 2019.

The box for Chocolatiers is much smaller than anything else Daily Magic puts out. It’s a small, very portable, box, and even at its small size, there’s quite a bit of air in the box.

When you first open the box you are presented with a ton of punchboards. They managed to fit 7 or 8 of them in this box. On these boards are mostly square chocolate box tiles but there are also some end game scoring tiles and bonus chocolates.

Under the punchboards are the rules. The rules are short concise and very clear. They are simple enough you can probably open up the game, read them out loud and start playing in about ten minutes. I don’t usually recommend reading the rules out loud to the other players, but it would work in this case. There is also a rules summary sheet that is only two pages long. After playing for the first time, this is pretty much all you need to familiarize yourself with the rules.

Finally, there’s a pack of small hobbit-sized cards. There are fifty-one cards in total, representing six different chocolates, some more common than others.

is not a complicated game. To set up you create a central market of chocolate boxes and chocolate cards. Each player gets a small starting hand of cards and three bonus chocolate tokens. The scoring tiles are placed in the centre of the table.

Each turn players take two actions. These actions include:

Drafting Chocolate Cards. You can either take one or discard a chocolate card from your hand to take two. 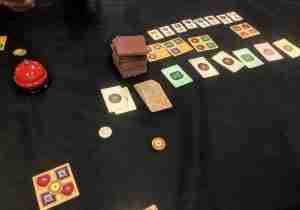 Reserving a Chocolate Box. Each player can reserve one and only one box from the centre of the table. They mark this by putting one of their bonus chocolates on it.

Playing an already reserved Chocolate Box. The player must discard chocolate cards matching the chocolates shown in the box. Two identical chocolate cards can be discarded to count as any other card. When played the Chocolate Box must be added to any the player already has. Players are making a two by three sampler and are limited to this size.

Spend a bonus chocolate. Place this into a spot on one of your already placed Chocolate Boxes. This can cover another chocolate or go in a blank space.

Play continues until one player completes a full sampler of six Chocolate Boxes. At that point the round finishes and the game ends. The first player to complete their sampler gets a special scoring tile.

The player with the most points wins.

There is a lot more depth to Chocolatiers than you would think:

You’ve got to admit that Chocolatiers

sounds pretty simple, and it is. The mechanics are simple to learn and teach and the gameplay isn’t at all complicated. It’s not until you start playing that you realize just how much depth there is to this game. 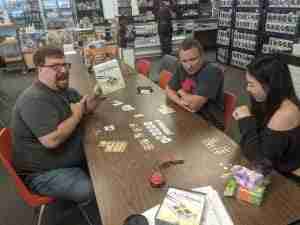 This is one of those games that I found was filled with “ah-ha” moments as I played it. At first, it seems pretty basic, but then you notice just how brilliant the tiles are laid out and how important tile placement is. Many of the Chocolate Boxes that are worth the most points have similar chocolates diagonally adjacent to each other. For those to be worth anything for you, you probably need to use a Bonus Chocolate.

Later when playing you realize just how valuable those Bonus Chocolates are. You realize that they can score you a lot more points by doing more than just filling a hole. The real joy of the game comes out when you start turning your eyes away from your own sampler and start worrying about what the other players are doing.

This is an extremely tight set collection majority game. One that is all about watching what the other players are doing and adapting your strategy to the changing game state. I would go so far as to say that Chocolatiers is a brain burner. I find this brilliant, especially when compared to just how simple and basic the actual mechanics are.

Everyone I have taught this game to has come back with similar feelings. Everyone likes to note just how much more game there is here than the small box, light theme, and simple mechanics indicate.

Have you had a chance to try Chocolatiers

? What did you think? What are some other great Thinky Fillers that I might want to check out?