You are here: Home / Reviews / A look at the origins of Deck Building – Returning to Dominion

Dominion is known as the grandfather of Deck Building, one of the most popular game mechanics out there.

I first reviewed Dominion back in 2010, when it was still The New Hotness. I think it’s time we take a look at that review as part of #ThrowbackThursday.

No deep wisdom to be found here. It was the next review I found on my old ProBoards forum after Cities & Knights of Catan. I do think it makes sense to take another look at Dominion

. It did basically start a genre. Note as discussed in our game mechanics episode and blog post, when I say Deck Building I’m talking about the act of constructing and improving your player deck during the game. This is different from Deck Construction, where players build their decks before the game starts and that deck does not change during play (like in Magic The Gathering

It’s also worth noting that this review is based on the first edition of Dominion. 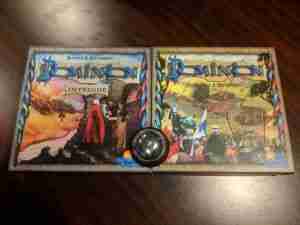 player who thought the best part of a Magic tournament was the draft. He had so much fun drafting cards that he decided he would make a game based on drafting. That’s what Dominion is.

In this odd game, you select a subset of all of the cards that come in the game and place piles of them out on the table. These become the cards that all players create their decks from. In addition to the cards on the table, the players get initial decks with some victory point cards and some money. The goal of the game is to construct the deck with the most victory points in it by the time the game ends. The game ends when three of the various stacks of cards [run out] or when the stack of the highest value victory point card runs out.

First and foremost this is an exception based game (like most of the CCG’s it’s based on). This means that the basic rules are very simple but that each individual card modifies these rules in some way. It’s the interaction of the various cards that makes the game fun, interesting, and strategic.

The cards laid out on the table consist of Action Cards, Money Cards and Victory Point Cards. Each turn players work to build their deck by drawing five cards and then playing and activating up to one Action card. After playing an action card the players then get to buy one card from the table. After this buy [phase] is done the players discard [any cards left on] their hand. If a player’s deck runs out they reshuffle it (which happens often). That’s basically it for the core rules.

What makes things fun are those action cards. Every action card lets the player do something that changes those basic rules. Most action cards give a player more actions, let them draw more cards, give them more money to buy cards, and/or give them additional chances to buy cards. Many other ‘card abilities’ are also present ranging from attack cards that can cause the opponent to discard cards from their hands, to cards that let you upgrade the cards you have in your deck.

I’m not going to take the time to describe what all the possibilities are. After playing one action card (and then possibly more if you play cards that add more actions) you then get to buy. You do this by paying money cards from your hand. Each card on the table has a cost. Here the player decides if they want more action cards to give them more options in future turns, more money with which to buy better cards, or if they should start adding victory points to their deck. What makes this most interesting is the fact that victory point cards are useless during play, so just take up room in your deck [and only matter] at the very end.

That’s basically it. The designers, brilliantly, included 25 different Action cards in the base game. Each game you only play with 10 of these, so this leads to a great variety of possible combination adding a great deal of replay value. In addition to this, there are a variety of expansions out that add one or more cards to the mix (heck even Boardgamegeek has their own Action card for Dominion).

What an interesting concept. I would have never guessed I would be playing a game where building my deck was the game itself. The game is extremely easy to learn and is probably the easiest to explain game I have in my collection (which is nice compared to some stuff like Race for the Galaxy). 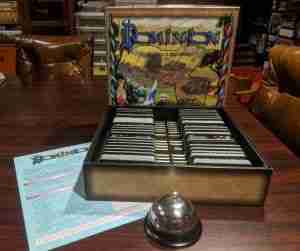 The exception based rules are perfectly done and make for an easy to learn and hard to master game. The card interactions are very well balanced and well organized. The fact that all players are drawing from the same resources reduce the random factor significantly which raises the strategic level.

This is also a nice short game. I get tired of epic games that take me all afternoon to play. Sometimes I enjoy being able to get in multiple games in one sitting and Dominion is perfect for that. One last note on the packaging. This game has some of the best packaging I have seen. The box has an insert that has a spot for every single card in the game. They are designed in such a way that everything has a place and amazingly everything stays in that place even when the box is stored vertically.

I have very few complaints about this game at all. The only thing that irks me about it really is the price vs. what you are actually getting. Due to the fact that the game is made up of stacks of cards that are all identical, all you are really getting in the box is maybe 30 different cards. When I think of how little that would be to produce it’s hard to justify the cost of this game. The company making it must have a huge return on investment on this one.

Now the fact that this is one of the best games I have played recently does make up for it though. For the amount of fun I am going to have with this vs. what I spent it will definitely make up for the cost. It’s just the thought of it when I look at the box contents vs. cost that makes me cringe a bit. 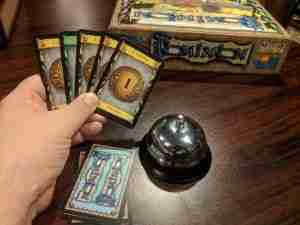 First off I had a hard time coming up with something Ugly about this one.

The only thing that really comes to mind is the fact that this game has the most ‘plastered on’ theme I can remember seeing. There is no reason at all that this needs to be an ’empire building medieval game’. This could have been a space game about colonizing planets just as easily as it could have been a game about collecting animals. Now, this is just a theme issue and has no impact on gameplay or how fun the game is, so really not much of a complaint. I actually wouldn’t be surprised to see a re-themed version of this in the future.

Overall this is definitely a top of the line, excellent game, worthy of its current spot in the top 10 on Board Game Geek [2018 update: it’s currently at #74].

It’s great to see something totally new and totally fun. Due to the ease in explanation, the replay value provided by the mix of 25 different action cards to choose from and the speed of gameplay I expect this one to get quite a bit of use. I expect it will be popular [at local events] where I like to get in a wide variety of different games in a short play time. Even though you are paying a lot for what you get, this is a great game and one I strongly recommend.

It’s pretty much impossible to overstate the impact Dominion

has had on the board gaming hobby. It’s not often that a game introduces a completely new way to play. There are so many deck building games out there now, all of which probably would not have been made if Dominion hadn’t come out and been as good as it is.

Reading how I found the entire concept odd, is entertaining. I personally love Deck Building and think it’s one of the best tabletop game mechanics out there. Some of my all time favourite games are deck builders. Clank!

are all games I still play regularly.  But what about Dominion?

Well based on my play history on Board Game Geek, the last time I played my copy of Dominion was in 2013. So more than five years ago. There are two reasons for this.

For one, I got really sick of Dominion. Locally it seemed like everyone was into Dominion. You couldn’t show up to a game night without someone breaking this one out. I couldn’t have a game night at my house without having someone suggest we play Dominion. I played a lot of Dominion. Too much, in too short of time. I burnt out on it. To help this I picked up Dominion Intrigue

, the first expansion. This refreshed the game, for a time. It adds more player vs. player interaction and I liked that but it was still Dominion. After Intrigue, I stopped. I figured I had an option: keep spending money to keep it interesting or just move on to other games. I moved on. 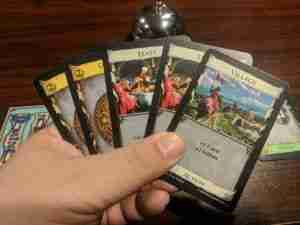 The other reason I haven’t played Dominion is that it now feels dated. It feels like part of a game. There just isn’t enough there to keep me interested. I don’t want to just buy cards that let me buy more cards. I want to use those cards to kill monsters and get victory points. Or I want to use those cards to explore a dungeon. Or I want to build up a tableau of cards and use that to take over the galaxy. While I appreciate Dominion and what it added to the industry, it isn’t often that I want to play it.

So why do I still own it? That’s a good question, and it’s all about introducing new people to the hobby and for tournaments. Because it’s Deck Building at is most pure and basic, Dominion is fantastic for introducing this mechanic to new players. So it’s great to have on hand when running public play events or hosting game nights for friends and families without as much gaming XP as your regular group. It’s also really good for tournament play. Most players already know how to play and those that don’t can learn quickly, it plays great four players and does reward skilled play. It’s up there with Catan for games I will put in pretty much every tournament I run.

Have you played Dominion? Do you own it? Does your copy still get played? Let us know in the comments. 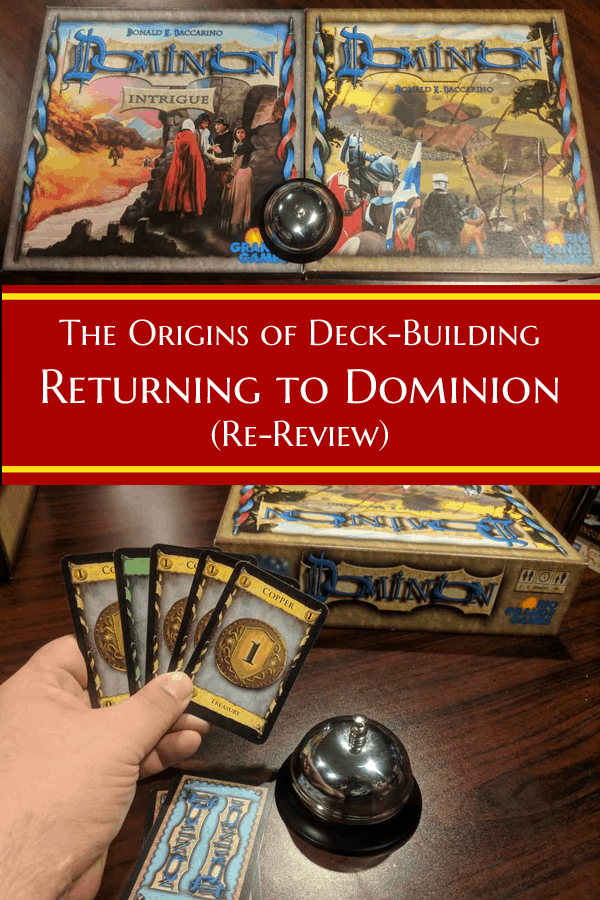 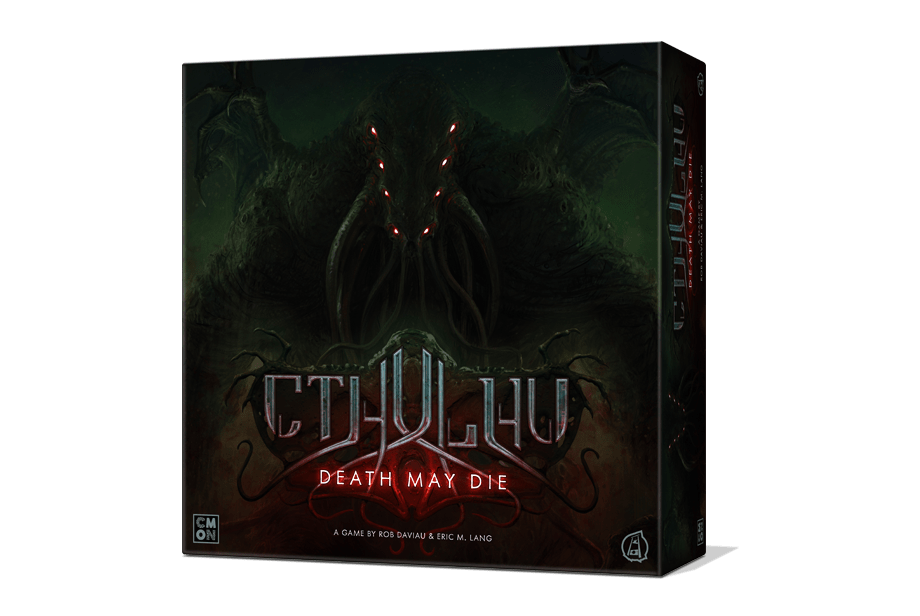 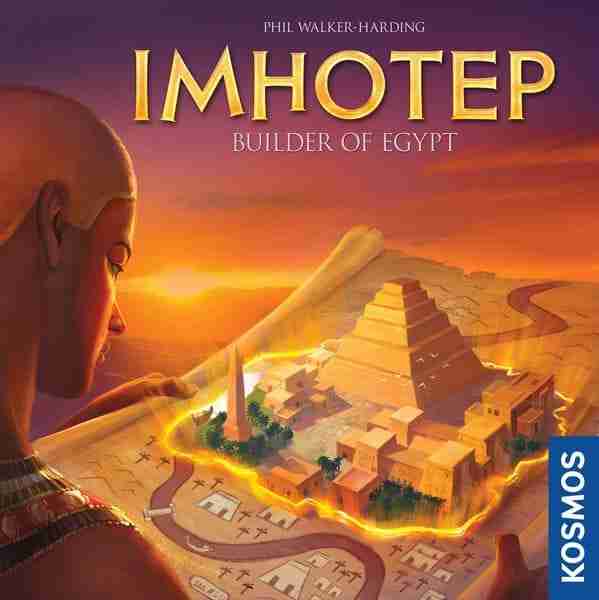 Re-review: A return to Quarriors a dice driven bag builder from WizKids