Review of Escalation, the First Expansion for the Eminent Domain Board Game 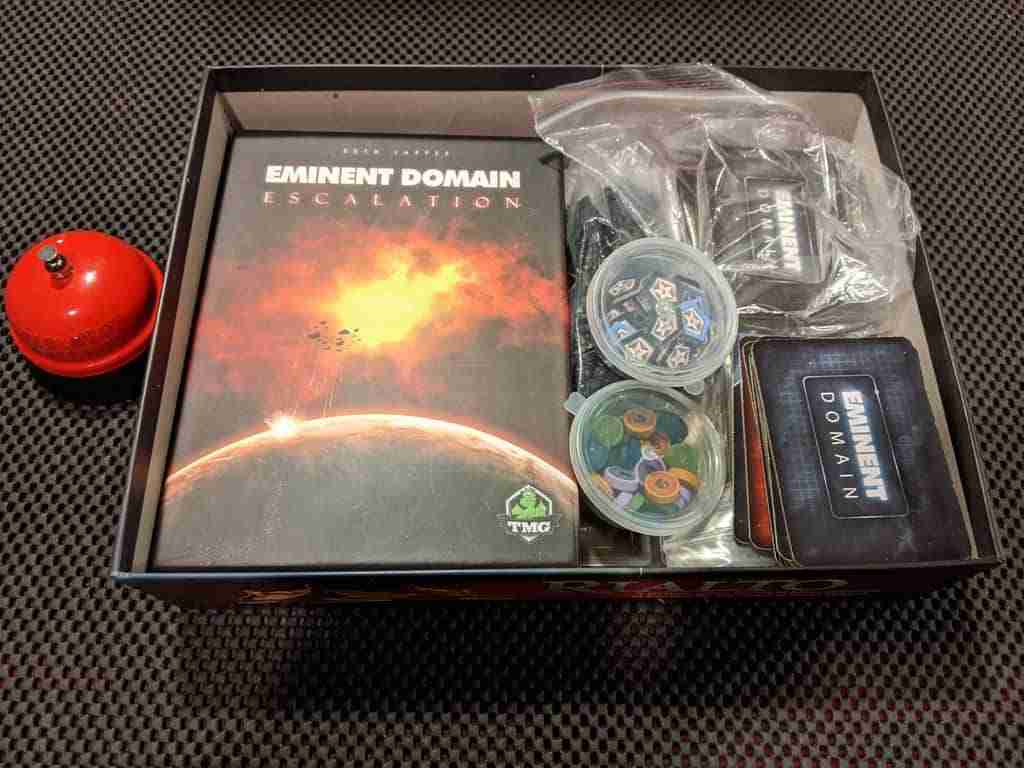 Since first discovering Dominion I have been a big fan of Deck-Building card games. What I really love is finding a game that does something new with this mechanic and Eminent Domain is one of those games.

Disclosure: Some links in this post are affiliate links. Using these links doesn’t cost you anything extra and it helps support this blog and podcast. As an Amazon Affiliate, I earn from qualifying purchases. Tasty Minstrel Games provided me with a review copy of this expansion, no other compensation was provided.

What do you get with Eminent Domain: Escalation?

The best way to see what you get with this expansion is to watch our unboxing video of Eminent Domain: Escalation.

What you will see there is a small box expansion that is tiny enough that it actually fits inside the base box for Eminent Domain.  Inside you will find the rulebook for the expansion, a TMG catalogue, two decks of cards, a large sticker, and three punch boards.

The instructions are a rather thick glossy 19 pages in total. A large portion of that are reference pages for the new cards added in this expansion. My only complaint here is that the rules are presented in white text over a dark starfield background. As my eyes get older I much prefer to see black text on white.

The punch boards have a full set of new starting worlds as well as some new reference cards for the way fleets are used with this expansion. These are nice and thick, matching the quality of the original game. 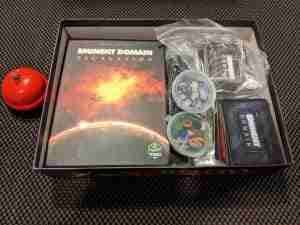 The sticker is for an errata to the base game. Two of the roles are meant to change when the stack of cards for that role runs out. This sticker goes over top of those two roles on the main board and has the revised rules. Note that later printings of the base game already have this fixed, so there’s a chance you may not need the sticker.

The decks of cards are also of the same quality as the original game with no change in them to make them stick out from the base game. There are a bunch of new role cards both for playing with five players and for using scenarios, which are both new options with this expansion. You will also find a ton of new technology cards and a rather large deck of scenario cards.

What does Escalation add to Eminent Domain?

The Escalation Expansion for Eminent Domain basically consists of three modules. You can mix and match between these three, using any or all of them to enhance your base game. 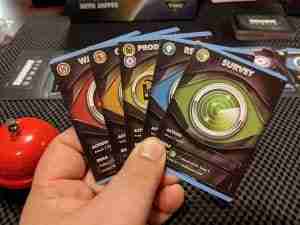 The simplest module ads a fifth player to the game. What I thought was nice about this was that all of the five-player components are colour coded blue so they are very easy to see and add or remove from the cards in the base game.

The next module is the scenario module. This expansion makes Eminent Domain an asymmetric game. At the start of the game, each player gets a scenario card. We usually do this by having players randomly get two and pick one, but other methods of distributing them are suggested such as drafting. The scenario card a player gets determines what they start with at the beginning of the game. The scenario cards feature different starting role cards for your deck, a specific or randomized starting world tile, and may even include one or more starting technology cards.

The final chunk of Escalation is a large set of new technologies and new world cards as well as some core rule changes to take advantage of these new technologies. The biggest change here is that Escalation changes the way you use fleets. In the core game, the various different fleet miniatures don’t mean anything. We often used the medium size ships to count as three small ships and the larger ship to count as five, but based on the rules it didn’t really matter as long as you knew how big your fleet was. 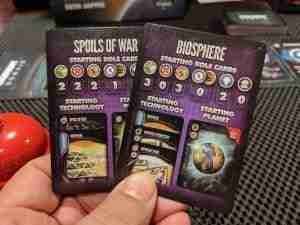 Escalation changes this so that each different size of ship miniature represents a different type of ship in your fleet. Along with this, a new action is included that lets you upgrade your ships by trading in so many small ships for a medium ship and so on. These new ships are tied to the new technology and world cards. Now players can use fleets instead of research symbols to pay for some technologies, and now certain worlds can only be settled by certain sizes of ships. Finally, the biggest ships can settle any planet instantly but they are also worth three victory points if you have one at the end of the game.

What this final module does is really change the warfare role from the base game, making using it a much more viable strategy while also reducing the power of the research power.

If you want to see this expansion in action, you can check our our Eminent Domain Actual Play video on YouTube.

My thoughts on the first expansion for Eminent Domain, Escalation.

When I first played Eminent Domain many years ago it was a friend’s copy of the game. I remember at the time him talking about how there was an expansion that “fixes the game.” I also remember that when he got Escalation that he actually did think the game got better. Back then I think I only tried the game with Escalation once and didn’t feel it made that big of a difference. 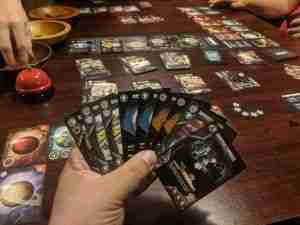 Fast forward about five years, I have played a lot more Eminent Domain and I’ve got to say I still don’t quite agree with him. At least in regards to the rules changes that Escalation introduces with the revised impact of the warfare role. I still feel the base game works great, and never found that warfare was underpowered or research was overpowered. Yes, research was strong but that was something that all the players needed to be aware of. If everyone playing had about the same experience with the game I found that people were able to counteract any overly strong combinations of technologies. I also found warfare to be a perfectly valid strategy, but one that couldn’t be pursued on its own. This was just part of playing Eminent Domain and not something I felt was broken in any way. 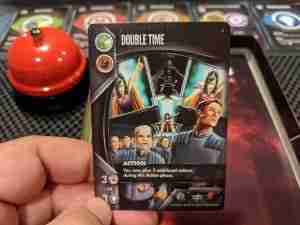 That all said I do like the changes that come with Escalation. It changes the feel of the game just enough to stand out. I found that the biggest impact to gameplay comes from the diversified technologies that required more than one type of world. Specifically the Double Time technology.

I found these had way more of an impact on the game then the changes to the way fleets work. Now with experienced players, this often results in a rush to get two different types of worlds as soon as possible and get one or more of those Double Time cards, which, again simply feels like an aspect of the game. Not something good or bad but something that players need to be aware of.

Regarding the addition of a fifth player. This is the least useful thing in the box to me. While it’s great to be able to play more games with bigger groups, I still think Eminent Domain, even with Escalation, plays best as a three-player game. Once you get up to five players the game gets longer, there’s more downtime, and in the games we played it seemed like a couple of players ended up getting way ahead of the others. We also found that the role card piles seem to deplete too quickly and the game actually feels that it ends too early despite the playtime being longer. 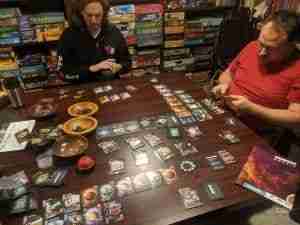 The final part of Escalation is the scenario system and this is my favourite part of this expansion. Everyone reading this blog should know by now that I love asymmetry in my board games. I love a game where everyone starts with something different and has to adapt their play based on what those differences are and that’s exactly what this part of Escalation adds to Eminent Domain.

Overall, while I may disagree that Escalation is a must-have expansion that fixes Eminent Domain, I do think there’s a lot here to like. If you dig Eminent Domain at all and don’t own this yet I recommend picking it up. Though you may be like me and still play and enjoy the base game and only sometimes pull out all the fancy new technologies and worlds.

As usual here at Tabletop Bellhop we’re all about The New Hotness… from 5 years ago. Is there an older game or expansion you just recently picked up and enjoyed? I would love to hear about it in the comments.