Both of my kids love anything with fairies in it, which is why I decided to check out Fairy Season a ladder-climbing card game with the theme of goblins trying to catch a swarm of fairies.

Fairy Season is a light, quick-playing, card game for three to five players that my kids ended up really enjoying.

Disclosure: I have to thank Good Games Publishing for sending us a review copy of Fairy Season. Some links in this post are affiliate links. Using these links doesn’t cost you anything extra and it helps support this blog and podcast. As an Amazon Affiliate, I earn from qualifying purchases.

What do you get with a copy of the fairy-themed card game Fairy Season?

Fairy Season was designed by Dan Fish and Gavin Jenkins and features some really great looking artwork from Sean Andrew “Muttonhead” Murray. It was published in 2019 by Good Games Publishing.

In Fairy Season players are playing goblins who are trying to catch the biggest fairy swarm they can.  This is done through ladder based play where players build the swarm by playing cards from their hands. Each card played must have the same or a higher number on it or be from the next season. Goblin cards mess with things and then there are four Royal Fairies that can help you get out of a bind. However, if one player manages to catch all four Roayl Fairies they instantly win the game.

The cards include 64 Season Fairies (two of each, numbered one to eight for each of the four seasons), 4 Royal Fairies (King, Queen, Prince and Princess), 16 Goblins (two of each of eight different types of Goblins) and 6 Trap cards. 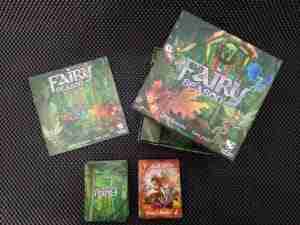 The card quality here is excellent with nice sturdy standard playing card-sized cards featuring some very evocative art. Each different season of fairy has its own artwork as do the royals and each of the goblin types. While I do love the art they used it would have been even cooler to have a different piece of art for each individual number of fairy in each season, but I can see how it would then have cost a lot more for the artwork.

The rules are eleven pages long and very clear with lots of examples using shots of the actual game cards.

How do you catch a swarm of fairies in Fairy Season from Good Games Publishing? 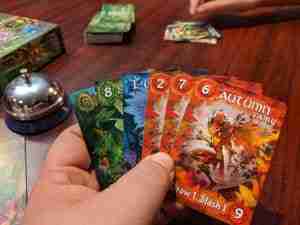 Set up for Fairy Season couldn’t be easier. You just shuffle all the cards together and deal out five cards to each player.

The starting player is the person to have last eaten a mushroom. They get to pick one card from their hand and play it. Usually, they will want to choose a Spring or Summer Fairy but this isn’t a requirement. That player will then take the action shown on the bottom of that card.

Players then will play one card per turn onto the growing pile of cards (the Swarm) until one of the players can no longer play anymore. That player is said to have Flunked and the player previous to the player that Flunked collects the Swam and puts it in their scoring pile.

The rules for which cards can be played when are called The Rules of the Hunt and depend on the type of card to be played. 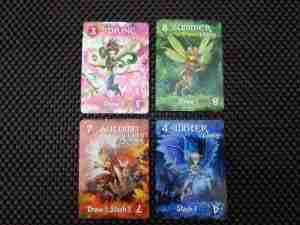 Fairy Cards must be played in a sequence with each card played either being from the same season and having the same number or a higher number than the last Fairy Card in the Swarm, or being from the next season. Note you cannot skip seasons. Seasons start in Spring and go until Winter.  After playing a Season Fairy Card, players will get to draw or Stash a number of cards. Drawn cards come from the central deck. Stashing a card means taking it from your hand and placing it into your personal scoring pile. 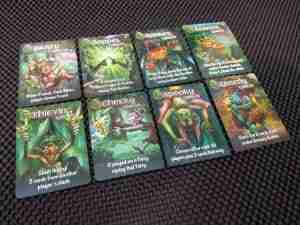 Goblin Cards can be played on top of any other card. They should be placed on the deck sideways so that you can still see the last Season Fairy that was played. Goblins each have a unique ability that often has to do with taking cards from the Swarm and Stashing them in your score pile, stealing cards from other players Stashes and putting them back into play or into your score pile, or passing cards between players.

Trap Cards can be played on top of any card but a Royal Fairy. When you play a trap card you will take the current Swarm unless the next player can also play a Trap on your Trap Card or anyone at the table plays a Royal Fairy onto the trap thereby freeing the fairies inside. 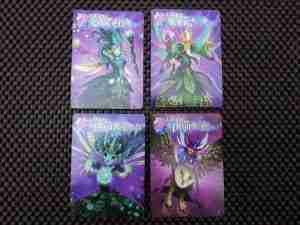 Play continues like this until the last card from the draw deck is drawn (unless someone manages to capture all of the Royal Fairies). You finish playing out the round with the current Swarm being the last Swarm of the game.

At the end of the game, players check their score pile. They get one point for every Fairy Card and two points for every Royal Fairy card. Ties are broken by the player with the most Royal Fairies, with a second tie resulting in a shared win.

How is Fairy Season the Fairy themed card game? 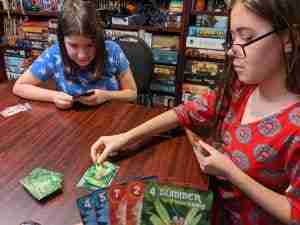 Fairy Season is a very simple card game that is very family-friendly due to its simplicity. I decided to check out this game because I thought my kids would like it and I’m going to base my thoughts on that premise.

A full game of Fairy Season is very quick, lasting only about fifteen to twenty minutes with a big chunk of that being shuffling the cards and adding up your final score. This is the kind of game where you probably won’t sit down to play just one round, but rather play a number of games in a row until someone tires of playing. Due to this, I think it would have been a nice addition if the rules had included some form of a scoring system based on multiple plays.

The gameplay in Fairy Season is straight forward. It’s a ladder-climbing card game, like Tichu, The Great Dalmuti and President, where players play cards from their hands that have to be a step up the ladder from the last card played. In this case, that ladder is a combination of the card number and the card season. This adds a nice thematic tie in that I think works well. This is combined with the goblin and trap cards to add a “Take that!” element to the game.

This take-that element may be a turn off for some players. A large part of this game is taking cards from other players’ score piles and either putting them back into the Swarm or stealing them outright. Added to this we found that the Traps, Royal Fairies and some Goblins, add a higher than expected level of randomness to the game. For example, a player who goes through an entire game never seeing a trap card is at a distinct disadvantage over the other players. 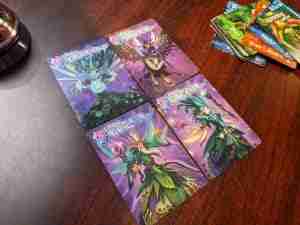 One of the things I like in a traditional card game is a Shoot the Moon aspect and I appreciated finding that in Fairy Season. In our plays so far we have had one win due to someone collecting all of the Royal Fairies and more importantly we’ve had other games where a player got close and the other players had to make sure it didn’t happen.

I like the overall feel of the gameplay in Fairy Season. I felt that the cards were well balanced in their abilities with things like the early season fairies being all about drawing new cards whereas the later seasons were about storing cards for points. Something else that actually ties into the theme.

Overall I think Fairy Season is a simple to teach, easy to play, quick-playing, game that’s great for kids and families. While it’s not the most thematic card game out there, there are some good ways the mechanics are tied to the fairy and goblin theme. Personally, I think the simple gameplay and high random factor is going to be a no-go for hobby gamers who prefer more complex card games with more player agency but I did have fun playing this one with the family. More importantly, my kids both really enjoyed the game. 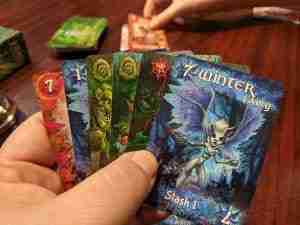 Both of my kids (ages 10 and 13) were able to pick up the mechanics quickly and learned some of the strategy and tactics after only a small handful of games. Both were happy to play multiple games in a row and it took quite a few plays for them to want to move on to something else. They both loved the artwork and the theme and my youngest really liked the take that nature of the Goblin Cards.

If you are looking for a family-friendly quick-playing card game with a cool theme, one that’s based on the traditional ladder-climbing card mechanic, it’s worth taking a look at Fairy Season. This is even more true if, like me, you have kids that are really into the fairy theme. If you are looking for the next great ladder game filled with deep strategy and tactics, you aren’t going to find that here. This is a quick filler game that is great for playing with kids and non-hobby gamers.

That’s now two wins for me as far as Good Games Publishing is concerned. First up, as you can read in my review, I was blown away by Funfair and now I’ve found a light card game that my kids love with Fairy Season. I look forward to trying more of their games. I think Unfair will be the next one for me.

Have you played any games from Good Games Publishing? What’s your favourite so far? Let us know in the comments.