You are here: Home / Reviews / Builders of Blankenburg – Fields and Flocks Preview

Over the last couple of weeks, I’ve been trying out a new prototype of an expansion for Builders of Blankenburg called Fields and Flocks.

Fields and Flocks adds a worker placement mechanism to the original city building game of Builders of Blankenburg. Today I’m going to share my thoughts on that expansion.

Disclosure: I received a prototype copy of Fields and Flocks from Cobblestone Games in return for providing this review.  In addition, I will be receiving a production copy assuming this expansion funds on Kickstarter.

My history with Builders of Blankenburg 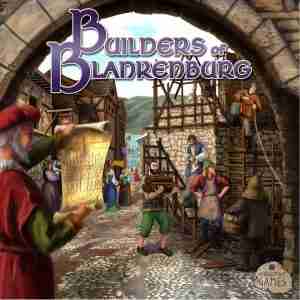 Builders of Blankenburg was a game I did a Kickstarter preview for back on the Windsor Gaming Resource blog. I was approached by Cobblestone Games in 2015 and asked to check out a prototype and preview it in return for a full production copy of the game.

My preview of Builders of Blankenburg, published on May 24, 2015, was overwhelmingly positive.  At the time I called it the best Kickstarter preview I had ever played. I’m still a big fan of the game. I consider it a hidden gem game. A game that probably would have been much more successful had it been published by one of the major publishers instead of by an independent.

I enjoy some of the unique things in Blankenburg. Specifically the dice driven auction system and the way the citizen track works. Two things that really haven’t been mirrored in any games since.

After Builders of Blankenburg successfully funded on Kickstarter I received my production copy and it was just as good, if not better, than the preview copy I had played. It’s a game I was happy to keep in my collection and one that still sees play, though infrequently, at local events here in Windsor.

Sometime late in 2018, Peter from Cobblestone games contacted me and asked if I would be interested in checking out a new expansion they were working on. As I was already a fan of the base game and had a good experience working with them in 2015 I agreed. That’s where this preview of Fields and Flocks comes from.

Please note that this is a prototype 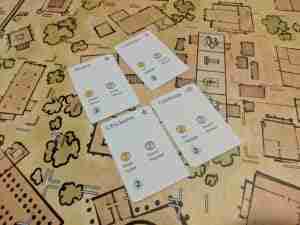 I want it to be very clear that the expansion I’m talking about here is a prototype. While I expect the final product to be similar, especially mechanically, there’s is no guarantee that the finished product won’t be significantly different from what I am talking about there.

This is especially true of component quality. The cards I was given have almost no art. Most of the new cards that are the same type as cards from the base game were created by the publisher putting stickers over existing cards. The meeple were stolen from another game and spray painted and don’t reflect the meeple that will be in the final product. The board I have is one sided and on foam core. The final board will be two sided and match the original board.

What does Fields and Flocks add to Builders of Blankenburg? 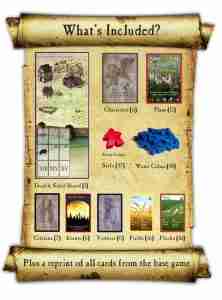 First off it adds more of what is already in the base game. There are new buildings, new citizens, new character cards and new events. These just get mixed in with the components from the base game. All of this adds more variety and replayability to the existing game, though some of the new buildings and citizens are tied to new rules included in Fields and Flocks, so you can’t just use all of these cards without the expansion.

While my prototype copy did not come with them, the final version of Fields and Flocks will include a complete replacement set of cards for the base game. These address some functionality issues with some of the original cards. Many were printed darker than intended and work is being done to make the resources used to build buildings clearer. 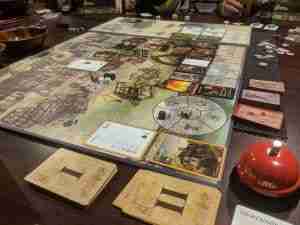 Along with these new cards, there are some minor but important rule updates. The public buildings that are placed on the board at the beginning of the game are now set, the same every game. There are also some changes to the market and auction phase for playing with five and six players. It’s noted in the rules that these changes should be used even if playing the base game. Personally, I have found all of these changes actually do improve gameplay at higher player counts, and are solid updates.

Now we get to the meat of the expansion the Fields and the Flocks.

There is a new two sided board that is added to the existing board. This new board gives some new multi-coloured building spots, increases the length of the citizen track, has a spot for two new decks of cards (field and flock cards) and has worker placement spots. To go with these worker placement spots are a set of Serf meeple. Each player starts with one, as well as a bank of other Serfs they can acquire later in the game.  The last new component is a significant number of blue wooden cubes representing water. 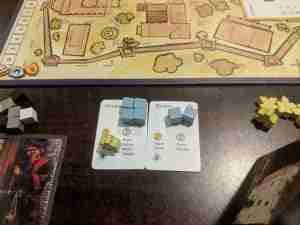 A new phase is added to the game, the Harvest Phase, which happens after the Income Phase but before the Market Phase. In the Harvest Phase, players use their Serfs. Basic worker placement actions include hiring new Serfs and purchasing either Field or Flock cards. 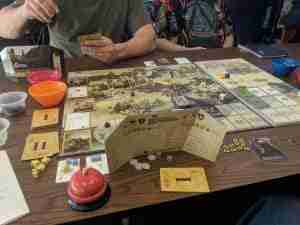 A ready Field or Flock can be used for two things. First, you can sell the goods the card produces to the citizens on the citizen track. Each Field or Flock lists 2-5 different citizens that would be interested in buying what the card supplies. Players get silver by playing a Serf on an appropriate citizen, but each citizen will only buy one good (with some exceptions). The other thing you can do with a ready Field or Flock is to attach it to an existing building in the town. This gives the attaching player Prestige (victory points) but ties up one of the players Serfs for the rest of the game.

While there are a few minor details and rules exceptions, that’s pretty much it for what Fields and Flocks has to offer. What this new phase and longer citizen track means is a significantly longer game. We’ve found with our plays so far that adding Fields and Flocks can almost double the game length of a game of Builders of Blankenburg. This time expense is paid off through a much deeper game with significantly more decision space and weight.

My thoughts on Fields and Flocks for Builders of Blankenburg.

At first, I was worried that adding worker placement to the base game of Builders of Blankenburg may have been a bit of a gimmick. I worried that Cobblestone was just trying to hit a new market and shoehorn in worker placement to a game that didn’t need it. I’m pleased to say that I don’t think this is the case or, if it is the case, it managed to work and actually improve the game. 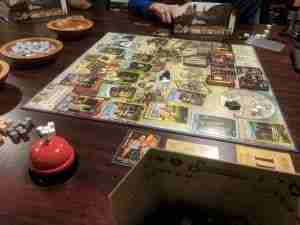 One of the things I found in the original game of Builders of Blankenburg is that silver is tight. Very tight. Perhaps too tight. One of the things Fields and Flocks adds to the game is a new way to generate income.

After a number of plays, I found that the way Fields and Flocks got used in the game was interesting. Early in the game people rush to get more Serfs and a small number of Fields and Flocks. The ones bought are completely based on the citizens on the citizen track. Once cards are ready they are used to generate income. Mid game the focus changes a bit. People start buying cards based on the buildings they can be attached to and competition for selling gets more fierce. During the end game, it’s all about attaching those Fields and Flocks to buildings including attaching them to opponents buildings to dissuade them from demolishing those buildings. 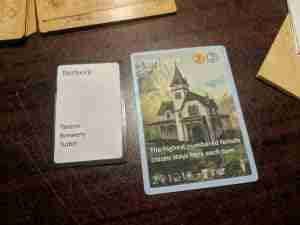 One problem I have with this expansion is centered around one card: The Convent. This new building is visited by the last female on the citizen track. The problem with this? I’m now required to make a judgement, based on the artwork on the gender of these citizens. I am told that the new cards in the finished version will list the gender of the citizens on each of the cards, but I don’t see that as a good solution. Gender shouldn’t be something I even need to think about playing this game at all. In 2019, this card just seems problematic to me. Added to that there is a rule exception that had to be written specifically for this card so that it doesn’t contradict another card in the set. To me the solution seems simple, fix both these issues by just removing this card from the game. I have suggested that to Cobblestone games and we will have to see what they do with the production copy. 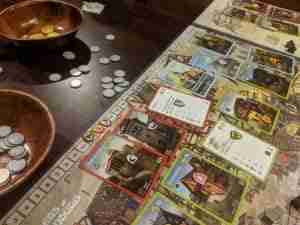 My other complaint is that of a potential runaway leader problem. Now there is a chance this is all due to inexperience on the part of one or more of the players but I have seen it happen in games with different player experience levels.

A couple of times we had games where there was one player who just got the right buildings built that matched the right citizens and thus got the most income that let them build more buildings that attracted the right citizens and so on. We also found some of the events and visitors rewarded the player already in the lead. I’ve been told a couple of those cards were promo items, which to me isn’t a very good excuse. Promo cards should be just as balanced as regular cards.

Overall I dig Fields and Flocks. It takes a game I already enjoyed and makes it longer and more detailed. It adds depth and weight to the base game, both things I enjoy. I do worry that this may not be for everyone, as some players may prefer the simplicity of the original game. Based on the times I’ve played it and the players I’ve played it with, I’ve yet to hear that complaint. I’ve also found that I have had no problem introducing the full game with the expansion to new players. I felt no need to remove Fields and Flocks and do a teaching game of the original first.

EDIT: Fields and Flocks for Builders of Blankenburg is live on Kickstarter right now – June 18th!

The Fields and Flocks expansion for Builders of Blankenburg failed at funding the first time, but they have edited it and updated it and re-launched on June the 18th. 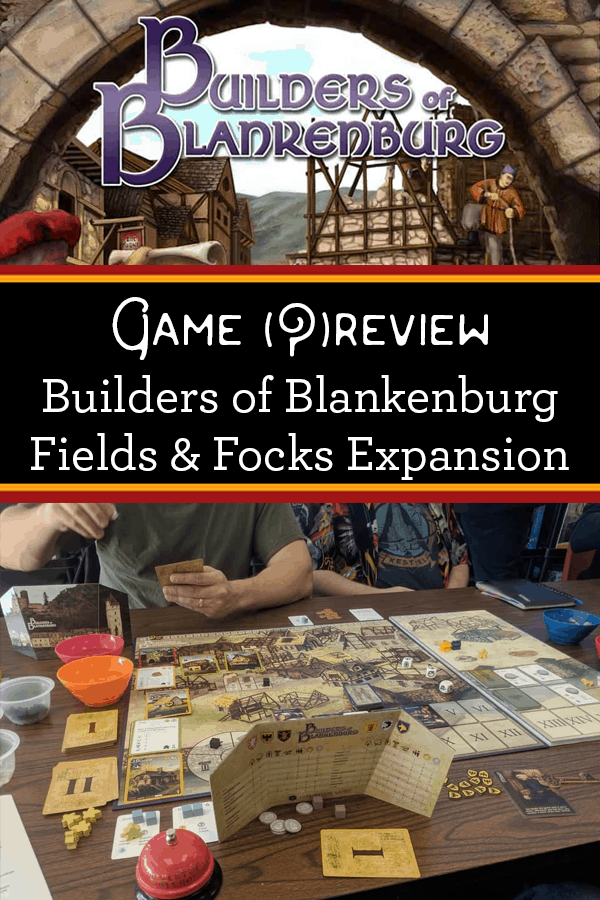 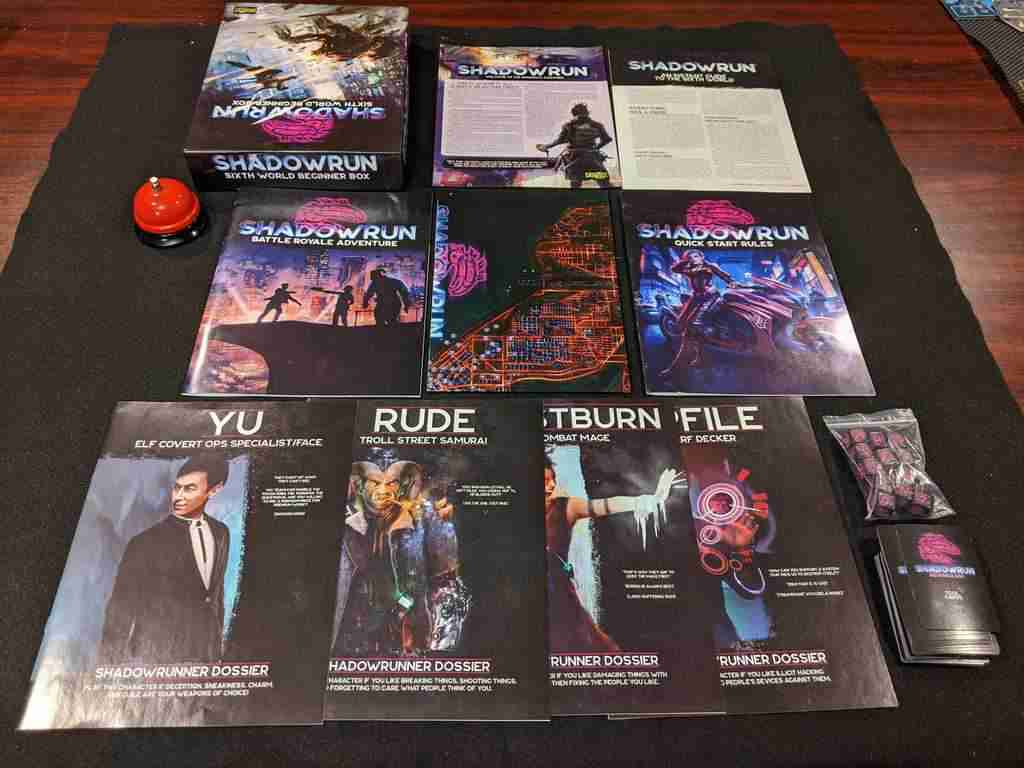 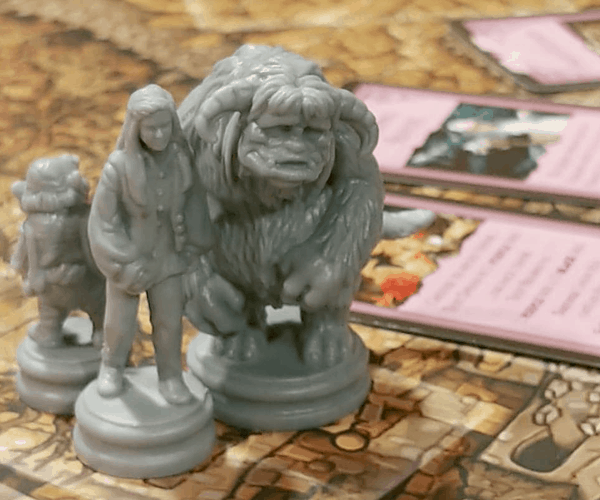 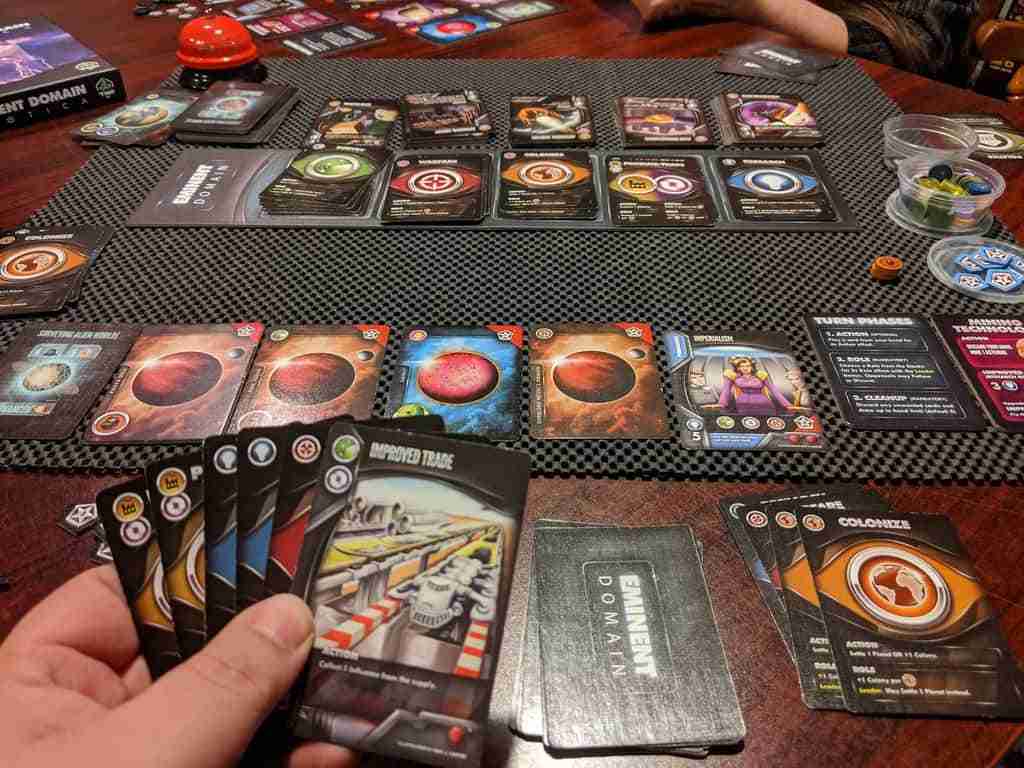