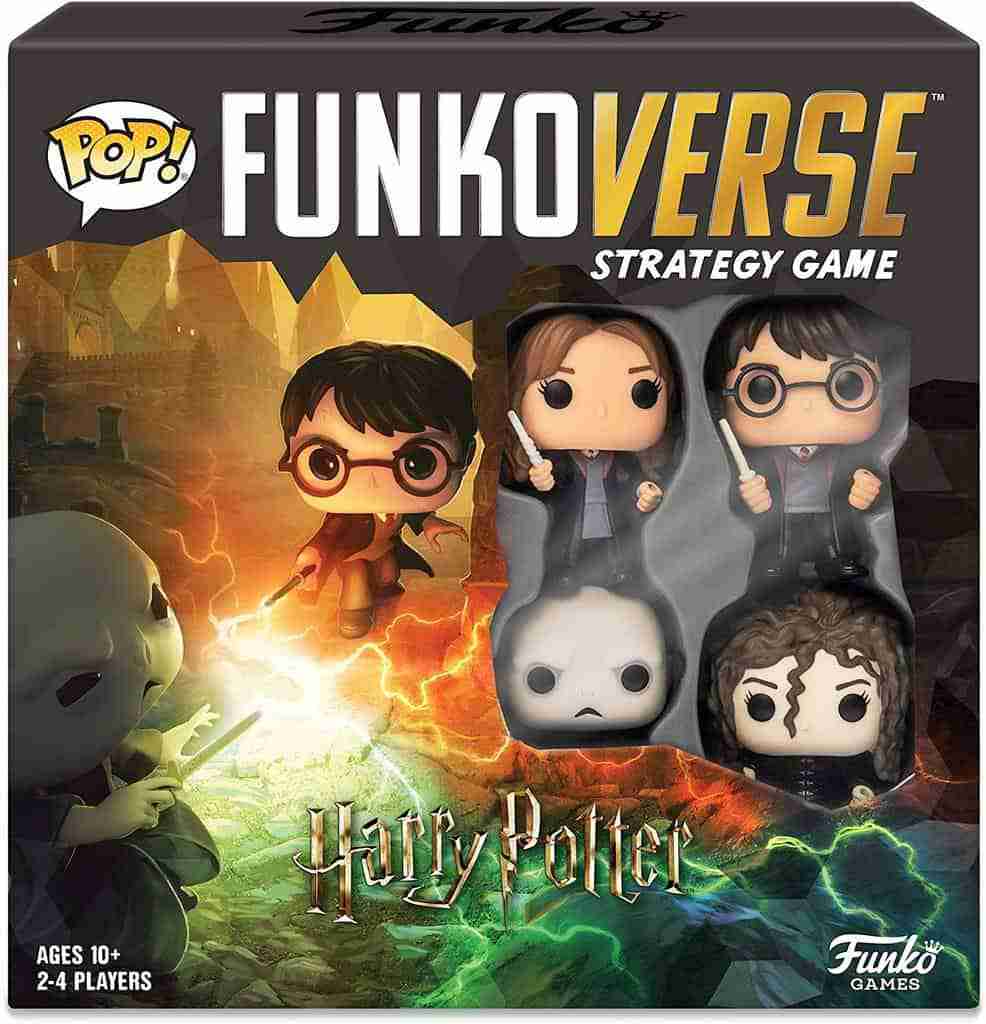 You can’t deny the popularity of Funk Pop! figures. The latest part of this collectable toy craze is a series of Funk Pop! board games called the Funkoverse Strategy Games. Today I’m going to share my thoughts on the FunkoVerse Harry Potter #100 Base Set.

I spent my Sunday afternoon at Windsor ComiCon and while there I taught a wide variety of gamers and Harry Potter fans how to play Pop! FunkVerse Harry Potter. Everyone I showed the game to was entranced by it.

Disclaimer: I’m not a Pop! or Potter fan. 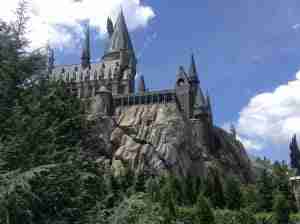 First off I think it’s important to point out that I don’t actually get people’s obsession with Funko Pops. Sure some of them are kind of cute but I don’t really get the mass appeal these toys, sorry collectables, seem to have. I don’t own any Funko Pops and I don’t plan on buying any in the future. That said, I’m not opposed to them. If you love them and collect them, all the power to you. I just don’t see the allure myself.

It’s also worth noting that I’m no big Harry Potter fan. I didn’t grow up with the franchise, I’ve never read the books and I thought the Harry Potter movies were only okay and were created for people who had already read the books. My favourite Harry Potter thing is the Wizarding World of Harry Potter at Universal Studios which I did think was extremely cool. The main thing I loved about that though is that they created an entire fantasy world you can walk around in complete with staff that stay 100% in character. It’s like a giant theme park LARP.

My kids, on the other hand, are huge Potter fans, and it’s mostly through them that I know the universe.

How do you play FunkoVerse Harry Potter? 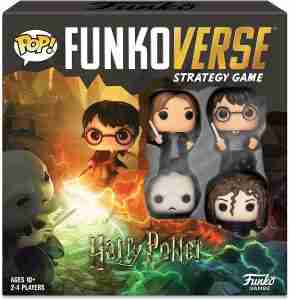 The Harry Potter FunkoVerse board game

plays two to four players and is basically a simple miniature skirmish game. The base game comes with four Funko Pop! figures: Lord Voldemort, Bellatrix Lestrange, Hermione Granger, and Harry Potter. It’s important to note that these are miniature Pop! figures that are about half the size of the standard Pop! figures you see for sale everywhere.

Along with the figures, you get custom dice, some really cool blue crystal point counters, cards for each character, four scenario cards, the rulebook, and various counters needed to play the game. This set also comes with two items. These are represented both by cards and by physical pieces that you can actually slot into the figure’s hands. In the Harry Potter 100 set you get a potion and a dagger.

The basic game has players trying to knock out the opponent’s figures. Each turn players pick a character to activate and take two actions. Actions include moving, interacting with a board element, challenging an opponent (attacking), assisting another character who is knocked down, or reviving yourself when you are knocked down.  In addition, each character has three special abilities and in the case of this Harry Potter version of the game, those are all spells. 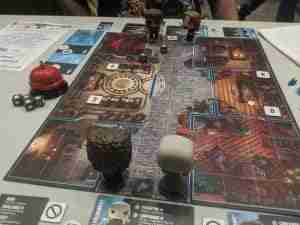 Spells and abilities all have a really well done cooldown system where when you use them you put a token on a time track that starts at four. Each round counters move down one and when they hit the end of the track they are ready to use. Powerful abilities start at the top of the track (in the fourth space) but less powerful ones could start lower on the track.

Movement is done moving orthogonally or diagonally on a grid with special rules for things like walls. There are basic line of sight rules included for any ranged abilities. Some powers and abilities affect the opponent’s characters and there are cards to represent these so that you don’t forget the effects. Combat is done through challenges and are resolved with the unique dice.

The dice are six-sided with three hits, two shields and one critical symbol on each die. A standard challenge requires the instigator to roll two dice, looking for hits or crits. The defender rolls dice in defence, the number of which is indicated on their character card. Crits and shields rolled by the defender cancel out hits from the attacker. Crits are wild and count as either three hits or three shields depending on who rolled them. If the instigator has more hits they knock the target down. If the target is already knocked down then they are knocked out.  Knocking out an opponent gives a player one point.

Knocked out figures go on the player’s cooldown track for one round and then respawn. Some of the characters have unique rules for how they respawn, for example, Bellatrix always respawns next to an ally. 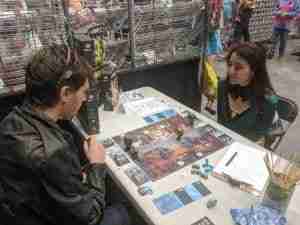 In addition to the base game, this FunkoVerse base set also comes with four different scenarios you can play through. I’ve only personally tried the Capture the Flag Scenario. In that scenario, in addition to getting points for knocking your opponents out, there are four crystal tokens placed on the map. Grabbing one of these gives the team that grabbed it one point. Then the token goes on the cooldown track starting at the top (so it takes five rounds for it to respawn). There are also flags placed in each team’s starting area. If you can end a round with one of your figures next to an opponent’s flag, you score two points. The game is a race to six points.

and then there’s a Golden Girls FunkoVerse Set

. Interestingly all of the sets use the same basic ruleset and are compatible with each other. I hear there’s a really powerful combo using The Joker and one of the Golden Girls.

What did I think of the Harry Potter FunkoVerse Strategy Game?

Okay, I admit it the FunkoVerse Harry Potter Base Set

is super cute. The Pop! figures are nice solid chunks of plastic that are well designed and look pretty great on the board. The boards themselves are nice and clear as to where you can move and can’t, however, I did find them a bit small. In a way, this is good as it means that players will end up in contact with the opposing team quickly but compared to other miniature games I play they don’t leave much room for manoeuvring. 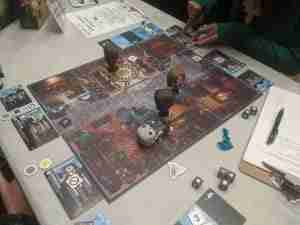 This game is really simple to pick up if you have any miniature gaming background. Simple gridded movement, a dice-based combat system that goes back to the days of Heroquest and really basic ranged combat and line of sight rules. This truly is a basic introductory skirmish wargaming with a pop culture theme. A theme that’s going to appeal to non-gamers and gamers alike.

I think this game is going to be a big hit with Harry Potter fans and I expect the same thing with the other games in this series. People who already dig Batman are going to be interested in the FunkoVerse DC Base Set. The game is simple enough that families and non-hobby gamers are going to be able to pick it up and play and have fun with it. These games are also going to be a hit with collectors, well, because Pops!

That leaves the gamers, people like me, and probably a lot of people reading this blog post. I personally don’t think there’s enough to these games to really keep a gamer’s interest for long. I played a lot of games on Sunday and the first few times it was some silly fun, but after about the third game I was getting a bit tired of the whole thing. There really isn’t a lot of meat here. There’s a very high random factor with the dice and games are so short that they aren’t all that rewarding when you do win. Which also means they aren’t that punishing when you lose, which is great for playing with kids and family, but I want more out of my skirmishing gaming.

Overall I think these FunkoVerse games are great games for Funk Pop! fans. I think they could be fantastic gateway games for people curious about miniature games and skirmish battles. For those of us who have been playing games for longer, there’s probably not enough here to keep us interested.

We also discussed this game and this review as part of our last live show. Check out the YouTube version of this Harry Potter FunkoVerse review.

Have you gotten a chance to check out any of the FunkoVerse games yet? What did you think? Let me know in the comments!