My initial thoughts on Gaia Project 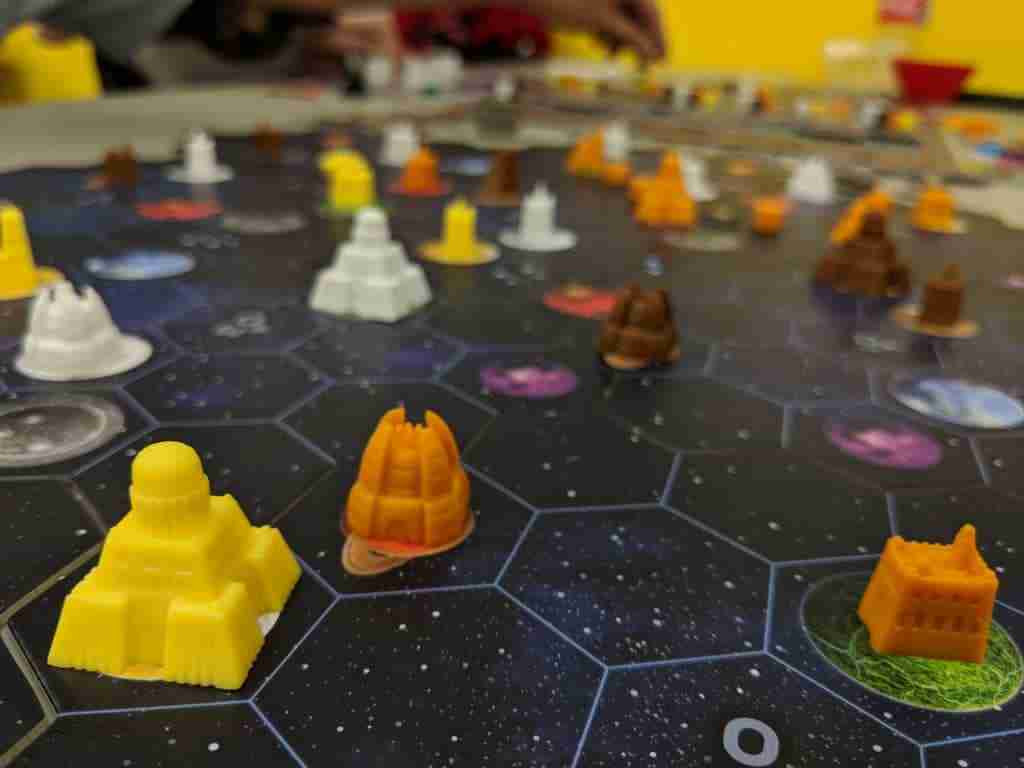 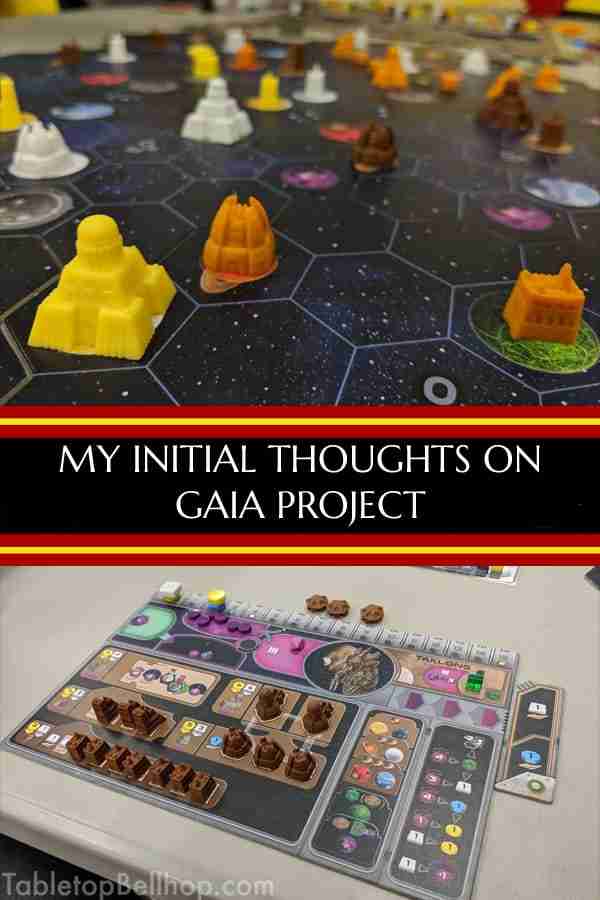 I’ve been planning to do a nice full detailed review of Gaia Project for about a month now. One of the main things stopping me has been the fact that I don’t own the game.

The main reason I don’t own it is that it’s not a cheap game and I’m not actually sure I need to own it. Gaia Project is a remake of Terra Mystica. I already own Terra Mystica, do I really need a copy of Gaia Project as well?

I finally got a chance to try Gaia Project last Saturday and I thought it would be worth sharing my initial thoughts. Note that everything here is based on one play and one play only. This is not a small simple game and I’m certain there is more to be learned over multiple plays, which I haven’t gotten under my belt, yet.


Disclosure: Some links in this post are Amazon Affiliate links. As an Amazon Associate, I earn from qualifying purchases. 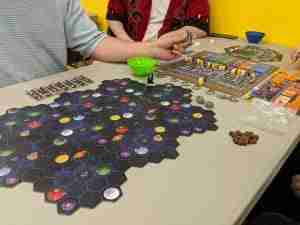 . I knew the game was based on Terra Mystica

and have heard many times it’s an improvement on it. Looking at the game, I expected far more changes than there actually are. To me, Gaia Project is really damn close to Terra Mystica. Like a 1.5 vs. a 2.0 revision. There’s more than just a re-theme but almost all of the core actions are the same. At least that’s how I remember it.

That’s one of my big problems right now. It has been quite a long time since I have played Terra Mystica. Long enough that I don’t remember all of the rules off hand. Due to that, I don’t think I can really give a good comparison. Right now I feel I need to do a couple things before I’m confident in the validity of my opinion on both games. First off I need to play Terra Mystica at least one more time. Second, I need to get in a few more games of Gaia Project.

Right now I feel Gaia Project is a really good medium to heavy game well worth picking up if you don’t already own Terra Mystica. For those of you like me, who already own the original game, you are going to have to give it a couple of weeks and I’ll come back with a better answer after doing a little more research.

Terra Mystica is one of the better games in my collection but one that doesn’t get played very often. The main reason for this is the fact that it’s a bit of a bear to teach. I’ve taught a lot of games over the years and I always stumble when breaking out Terra Mystica. The main problem is that there are so many possible actions that a player can take on their turn. Each individual action isn’t hard to carry out but there are so many options that it becomes overwhelming.

When I heard that Gaia Project is an improved and streamlined version of Terra Mystica I really expected that one of the improvements to be that there would be fewer actions and those actions would be easier to explain. That does not seem to be the case. It’s possible there are fewer actions but each of those actions has additional choices or more mechanical interactions. 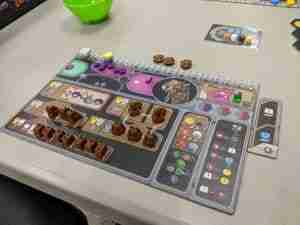 One of the big things that did change is the theme. In Gaia project, each player takes on the role of an alien race. Each of these is different from the others making for a very asymmetric game. There are a crazy number of these aliens to choose from, 14 to be exact. The game has players starting off at their race’s home planets, improving five different types of technology, and using those technologies to expand and terraform neighboring planets.

Players expand their empires by picking one of eight actions each turn. Build Mines, Start A Gaia Project, Upgrade Existing Structures, Form a Federation, Research Progress, Power and Q.I.C. Actions, Special Actions or Pass. Most of these actions have direct counterparts in Terra Mystica. Building Mines is Terraforming. Federations are the same as Cities. You still have the rather odd and hard to explain power pool with associated power actions. Instead of raising your level at temples you are instead developing technologies. Players of one game are going to understand these actions right away.

The funky new stuff has to do with the Gaia Projects and Q.I.C Actions. There are these purple nebula spots on the map. After researching the right tech you get these Gaia Project counters, which you can then place on the nebulas and transform them into green planets. Basically, you get to do the Star Trek Genesis Project thing (Khaaaaannnnn!). This is an interesting addition. The Q.I.C. cubes are a new resource that is very powerful and can be converted into pretty much any other resource type or saved up to use on one of three special Q.I.C. powers. The ability to convert your Q.I.C. cubes to other resources seemed to make resource management less of a concern than in Terra Mystica.

Most of the other things are pretty much right out of Terra Mystica: each round building something is going to score you bonus points, what that building is changes each round and you know this from the start of the game. Each round you draft player power tokens that give you bonus stuff and when you pass you return yours to the pool and pick from one of the remaining tokens. Each round starts with everyone getting income based on how many “hand out” symbols they have. There is probably more. A lot of it is right out of Terra Mystica. The more I think about it, the more I think they are similar. Like 85% the same game, maybe even 90%. 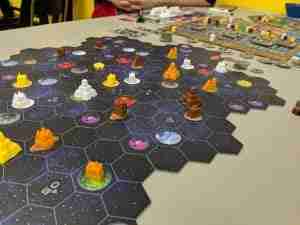 So what about everyone saying this is the better version and it’s more streamlined? Well, maybe I imagined hearing about the streamlined part as I didn’t see that at all. This felt clunkier with more decision points and more variables. Not that more decision points are a bad thing. Moving around on the map was much easier with players able to basically jump across the board using Q.I.C. cubes for extra movement. The power pools did feel easier to manage, but I have no idea if that was something that changed in the game or just the fact I’ve finally played enough of the two games to grok it.

That leads to the important question, is Gaia Project better than Terra Mystica?

I don’t know. I really don’t know. It doesn’t seem any easier, or quicker, or simpler to teach. It was fun to play. A lot of fun. It’s a great game. There is some new stuff. The Q.I.C. cubes seemed to open up more options and stop someone from getting stuck in a losing position. At this point though I honestly can’t say. I really need to play a few more games. Not only that I would really like to go back and give Terra Mystica another play or two. I want to make sure that my memory of it matches the actual play experience. 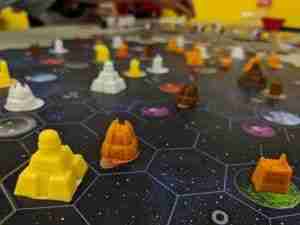 At this point, my final thoughts are that I don’t have enough information to give my final thoughts. I really need to give Terra Mystica another shot, even if it’s just to jog my memory on how the game plays and then I need to play some more Gaia Project.

That said, based on my initial play, if you didn’t own either I would suggest starting with Gaia Project. It seems like the more refined game. It may not be easy to teach but getting past that learning curve is worth it. There’s a very solid medium to heavy sci-fi game here that’s worth playing.

If you do own Terra Mystica definitely try before you buy or maybe just give me a few more weeks to do my research and hopefully I can give you a better answer.

If you are interested in hearing more thoughts on Gaia Project check out The Tabletop Bellhop Gaming Podcast Episode Seven, specifically the Tabletop Gaming Weekly segment.

Have you played both Gaia Project and Terra Mystica? What did you think?