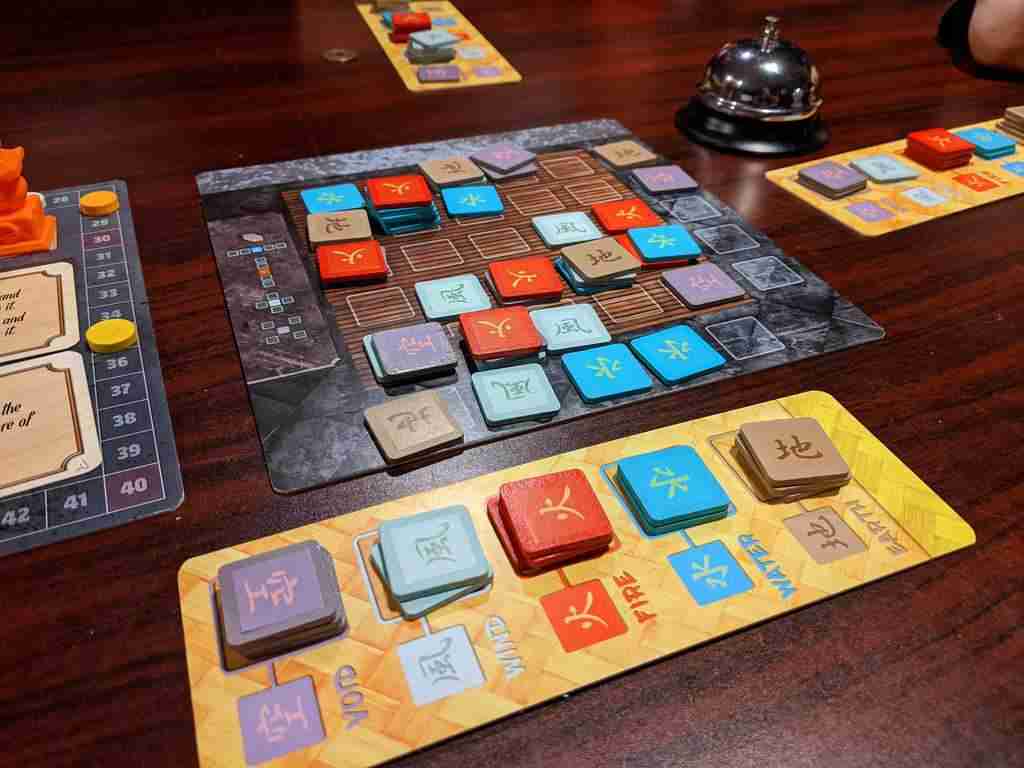 I’m a big fan of abstract strategy games. Games like Azul, Sagrada and The Duke are some of my favourite hobby board games of all time. This is why I jumped at a chance to try out the prototype for this new tile laying and tile drafting game from Grand Gamers Guild called Gorinto.

Gorinto was designed by Richard Yaner and features art by Josh Cappel. It will be launching on Kickstarter on February 12th, and based on what I’ve seen with this prototype version of the game I don’t expect it to have any problem funding.

Disclosure: Grand Gamers Guild provided me with access to a preview copy of Gorinto, which I have since mailed on to another Canadian reviewer.

Everything in this preview pertains to a prototype copy of Gorinto. 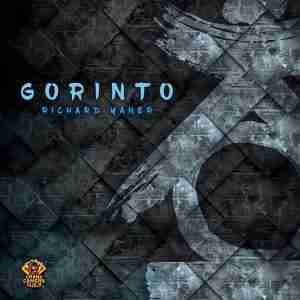 The copy of Gorinto I received is a prototype reviewer copy. It does not reflect what the final game will look like. While Marc from Grand Gamers Guild assures me the rules are pretty much finalized, he was very clear that the game will be significantly physically better than the copy I played with. The mountain will be larger with tiles more spaced out. The tiles themselves will stack. There will be other improvements. The important thing to note is that all of the pictures shared here and all gameplay experiences I’m relating to you are based on a prototype.

Also due to the fact this is a prototype, there’s no unboxing video for you to watch and I’m not even going to talk about the component quality as I know it will be different when the final game comes out. I will just say that this was a very playable prototype and that I’ve bought finished games with less polish.

What is the strategy game Gorinto all about? 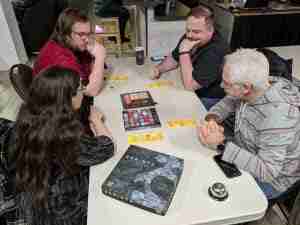 A Gorinto is a style of Japanese pagoda made up of a stack of five different shapes. The shapes represent the five elements: Fire, Earth, Air, Water, and Void.

In Gorinto the board game players increase their understanding by collecting tiles representing each of the five elements. Tiles are collected by moving a tile from the path (the edge of the board) onto the mountain (the main board which consists of a 5×5 grid of tiles). What tile is placed onto the mountain determines which tiles the player can then collect. Collected tiles go in stacks by element onto a personal player board.

The game is played over four seasons. The end of each season has players score points based on randomly determined goals set at the beginning of the game. This scoring is based on the player’s knowledge of the five elements represented by which tiles they have collected. At the end of the game, there is also a bonus scoring round where two of the five elements will reward players extra points. 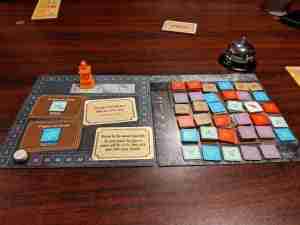 You start a game of Gorinto by building the Mountain, pulling tiles from a bag and stacking them on the 5×5 grid on the main playing board. The game includes a variety of different Mountain patterns you can setup. Once the Mountain is built, ten tiles are placed on the Path. These are twelve spots running down the top and side of the Mountain, six on each side. As well, two goal cards and two end game scoring cards are drawn and placed out on the scoring board.

Each turn players must take one tile from the path and place it into the corresponding row or column of the mountain that aligns with where the tile was taken from.

The number of tiles a player gets to take is based on their knowledge of that element, represented by how many tiles of that type they already own plus one. If tiles can be taken they must be taken.

Thus on your first turn, you will only take one tile, but on later turns, you will take more tiles as your personal supply of tiles representing your knowledge of each element grows. For example, having three fire tiles on your player board will let you take four tiles from the column on the Mountain where you placed your the fire tile from the Path on. 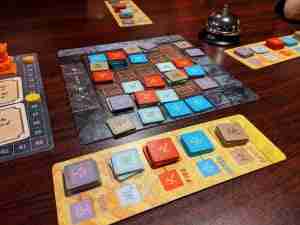 Play continues to the next player until there are fewer tiles left on the Path than the number of players, at which point the season ends. At the end of each season, all players will score both of the goal cards.

These goal cards include a huge number of options, all of which are based on which elemental tiles players have drafted. Examples include: Score your tallest stack twice and your lowest stack once, score all even stacks, score any stacks that are the same height, or score the difference between your tallest and your shortest stacks, etc.

After scoring, the first player token and position goes to the player in last place and the game continues into the next season with a new set of twelve tiles laid out on the path. After a full four seasons, there is one final scoring round in which the two end game scoring cards award points.

The player with the most points wins. 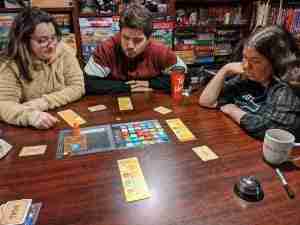 In addition to the base game, my prototype also included a set of five Dragon tiles. These can be mixed in with the rest of the tiles and work as a wildcard. When you place a Dragon from the path you can choose which element it acts as, and when drafting a Dragon tile to your personal board you can decide which element stack to place it in.

Finally, the game includes a team based mode for four players. In this mode, scoring cards are placed between each pair of players. Players are partnered with the person sitting opposite them and players only score the scoring cards on their left and right. Each turn when you draft tiles you must give one to your partner.

What did I think of Gorinto from Grand Gamers Guild?

I’m going to straight up say it, I’m loving what I’ve seen in Gorinto so far. I’m a big fan of good abstract strategy games. Games like Azul hit my table often and I continue to enjoy them over multiple plays. This is what got me to agree to check out Gorino in the first place. The images I found online showed me what looked like a very cool abstract tile game and the bit of info Marc shared online made it sound like it did some interesting things with the way you place and draft tiles. 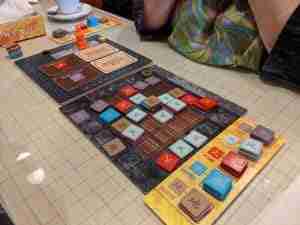 When Deanna and I first tried out the game over coffee, both of us looked at each other and basically said the same thing: was that as good as it felt like it was? We were in a bit of a state of disbelief. Since then we have both played multiple times and each time reached the same conclusion, this is an excellent and fascinating abstract.

Of all of the times I’ve played this game, and have facilitated it being played by others, I have only heard some minor complaints. These all revolve around the game being played at four players. The first is that the player in last place can be limited in their options and if the same player goes first two turns in a row or more it can be particularly punishing. The other “issue” that was brought up is that with four players, each player only gets two turns per season, where at the other player counts players get three turns.

This second complaint I personally didn’t see as a problem, just something for you to realize and adjust your strategy accordingly. However. I did find the game flowed better with two or three players. Now, this wasn’t a problem at all in the four player team mode, as I actually really enjoyed that version of play. As for the last player problem, I didn’t see it myself but it was suggested that if players find this a problem just rotate start player with each player going first in a different season.

Overall I had a ton of fun playing around with this prototype of Gorinto. I’m looking forward to the Kickstarter campaign and while I want to wish Marc and The Grand Gamers Guild luck, I don’t think they will need it, as they have a very solid game on their hands here.