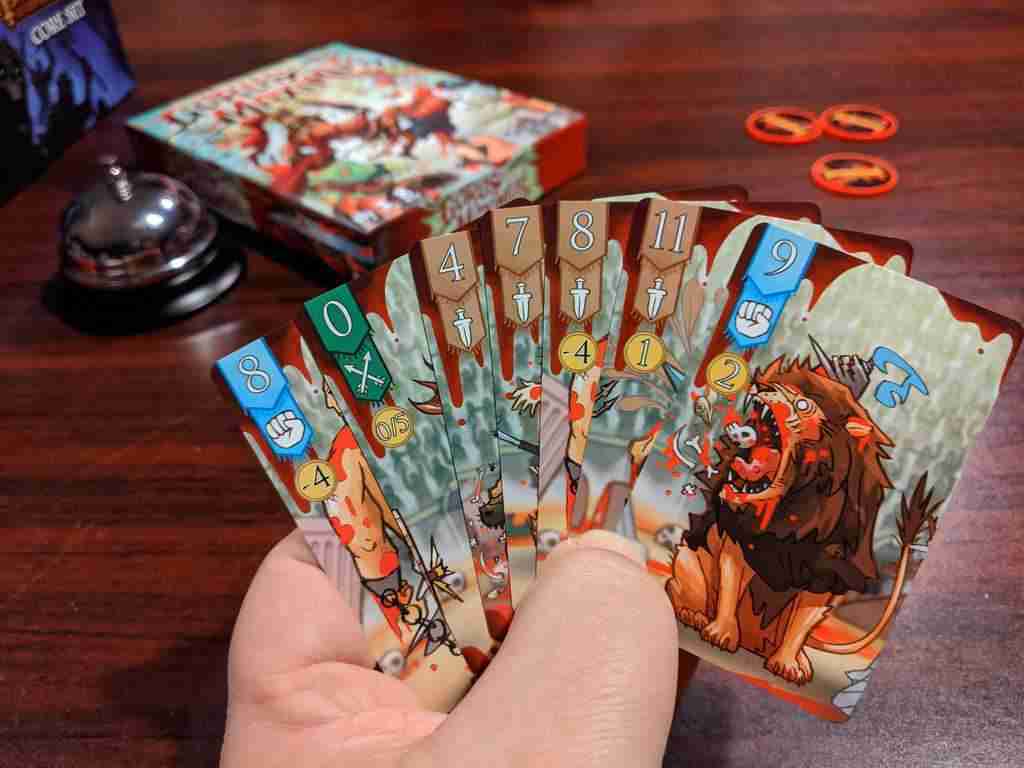 Traditional trick-taking card games have always been popular with gamers. It’s not often though that you find a card game that plays from one to eight players.

Gorus Maximus is one of the rare trick-taking games that play more than four players. It also features a unique theme and distinctive art style.

Disclosure: Some links in this post are affiliate links. Using these links doesn’t cost you anything extra and it helps support this blog and podcast. As an Amazon Affiliate, I earn from qualifying purchases. Conor McGoey, designer of Gorus Maximus sent me home from Origins with a copy of this game. There was no obligation to review it attached but I wanted to talk about the game anyway.

What’s in the Gorus Maximus Box?

Gorus Maximus was designed by Conor McGoey and published by his Canadian publishing company; Inside Up Games. It features some rather over the top artwork by Kwanchai Moriya. Gorus Maximus was funded through Kickstarter in 2018 and also published in 2018. The copy I am reviewing is the standard retail edition of the game.

One of the first things I noted in the unboxing video was the fact that the back of the box includes a QR code with a Learn How to Play in 2 Minutes link. The other thing that I thought was worth noting is that the box is very thick and sturdy.

Inside the box, there are multiple rulebooks, in three languages. Sadly my English rulebook was tucked badly into the book and pretty badly creased. The rules are only eight pages long and include a ton of examples.

The rulebook hits all the good points of including things like a full inventory of components and a table of contents. My only complaint is that the font is rather small and hard to read for old eyes like mine.

The poker chips which are used to track scoring are very well made. They have a great weight to them and feel great in the hand. They really are a step above as far as the component quality you expect in a card game. A very nice touch.

The tuck box is another interesting addition to this game. What I didn’t know when I recorded the unboxing video is that this box is a travel box. It’s just big enough to fit components for a five-player game of Gorus Maximus. If you know you are only going to have five players you just have to bring this tuck box and can leave the full box at home. Another cool upgrade from most card games.

The cards are of pretty decent quality. They are a bit thinner than standard playing cards. The cards feature a variety of rather bloody gladiators and beasts in five different suits. The cards are numbered 0 to 15 in each suit and each number features unique artwork with the colours of the artwork changing for the suits. Information on the cards is pretty easy to read.

I was disappointed to see that the important game information isn’t repeated in two corners of the cards. This is pretty much standard for most traditional card games, and I was surprised at not seeing that here. Everything is in the top left corner only.

How is Gorus Maximus the gladiator card game played? 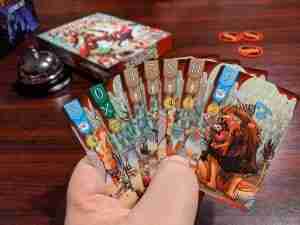 The first thing you need to do when setting up a game of Gorus Maximus is to build the deck. How many suits you use, and which cards in each suit, is determined by the number of players. Each player count has a totally different setup, each of which ends up with there being ten cards per player in the deck.

At the start of the game, each player is dealt ten cards.

Play starts to the left of the dealer as it does in most trick-taking games.

The first card led sets the trump suit for that turn and that is marked on the included trump card with the plastic clip.

Players, in turn, must follow the suit that was led, if they cannot they can play off suit. The highest card played in the led suit will take the trick unless someone plays trump, in which case the highest trump card will take the suit.  This is the same as almost every trick-taking game ever invented.

The big change is that players can issue a Challenge. This is done by playing the same numbered card as the player before you. When you do this trump changes to the suit you used to challenge.

What this means is that trump can change in the middle of a round!

The player that takes the trick gets the lead for the next round. Note trump is set at the start of the game and only changes if someone issues a Challenge.

Players continue to play until everyone has played all ten of their cards.

At this point, players look at the cards they have collected through trick-taking and add up the gold coin values of the cards. This represents the fame their gladiators earned during that round. The player with the most fame wins the round and takes one of the scoring chips.

Play continues over multiple rounds until one player has won four rounds. They are declared the winner.

It’s worth noting that different point value cards are worth different amounts of coins, some of which are negative. What this means is that this is not a game where you are trying to take all of the tricks. Rather it’s about knowing when you do want to take a trick and when you don’t and knowing when to play off suit and punish a player who you think is winning.

What are my thoughts on Gorus Maximus from Inside Up Games? 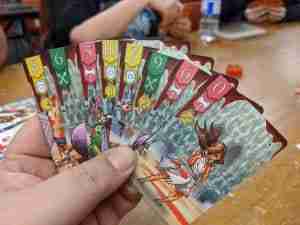 The first thing I need to talk about in regards to Gorus Maximus is the artwork. I am not a fan.

While I understand that the name of the game is basically maximum gore, I find the artwork to be over the top. There is blood everywhere on every card and body parts and limbs flying everywhere. It’s gratuitous.

Now I will admit that the art has no impact on the gameplay, and I’ve even realized that while actually playing my focus is always on the information at the top corner of the cards. Which means that in the middle of the game I don’t really pay much attention to the art at all.

The problem with the art is that this is a really solid trick-taking game that I think my kids would enjoy playing, but there’s no way they would ever want to play this game, or even look at this game. My kids are very gore and blood adverse and the artwork would not only scare them away from playing they would probably have nightmares.

I personally would have much prefered this game be more accessible and family friendly, and that’s because it really is a good game.

This is one of the best trick-taking games I’ve played at high player counts. While the game is decent with two or three players, it really starts to shine once you add in more. So far, based on all of my plays, my favourite player count is actually six.

With six players the highest number in each suit is a 13, which is a -2 point card. This leads to some interesting decisions during the game and really rewards players who can keep track of where those 13s end up.

Everyone I have played Gorus Maximus with warms up to it and ends up having a great time. I’ve also had people note that this would be a great beer and pretzels game and that playing with a few adult beverages would probably enhance the experience, though I haven’t put that to the test yet.

Gorus Maximus has that “sit down have a few beers and play some cards” feel.

As for the artwork I’ve met players who love it, players who are indifferent and players who don’t like it at all. The overall agreement seems to be that it would be nice to have a gore free “family friendly” version of the game that was a bit more accessible to more gamers. 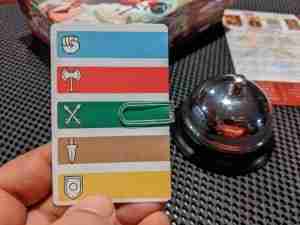 My only other complaint with this game is the plastic clip and card used to track which suit is trump each round. The clip is a really cheap piece of plastic and I feel like I’m going to damage the trump card every time I slip it on. Most games we just lay it on top. What I would have preferred is a gladiator meeple or something you could stand on top of the card instead of this clip.

Overall this is a great high player count trick-taking game. If you enjoy games like Euchre, Hearts or Spades, but often find yourself with groups of five or more players I strongly suggest picking yourself up a copy of Gorus Maximums.

A note about the ManBearPig Promo Card for Gorus Maximus. 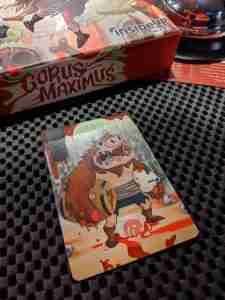 One of the things Conor gave me with my copy of Gorus Maximus is the ManBearPig promo card. This is promo card was first put out at GenCon 2019 and pictures the mascot from the Brawling Brothers gaming podcast.

You can add the ManBearPig card to the deck at the start of a game of Gorus Maximus. When dealing out cards instead of the first card led setting trump, you flip over the last card in the deck and it sets the trump suit for the round.

The ManBearPig wins every bout it is in (wins whatever trick it is played in).  If the ManBearPig is lead other players have to follow with the trump suit. If another player leads with trump and the player holding ManBearPig doesn’t have any trump cards they must play ManBearPig.

I’ve played games both without and with this promo and I really like including it in the deck. I like the fact that trump is determined randomly when using this promo card and we’ve had some really great gotcha moments that have always been memorable when including this card.

If you can get yourself a copy of the ManBearPig promo card, I do think it’s worth grabbing as it has enhanced our games of Gorus Maximus.

Do you like trick-taking card games? What’s your favourite? Let us know in the comments! 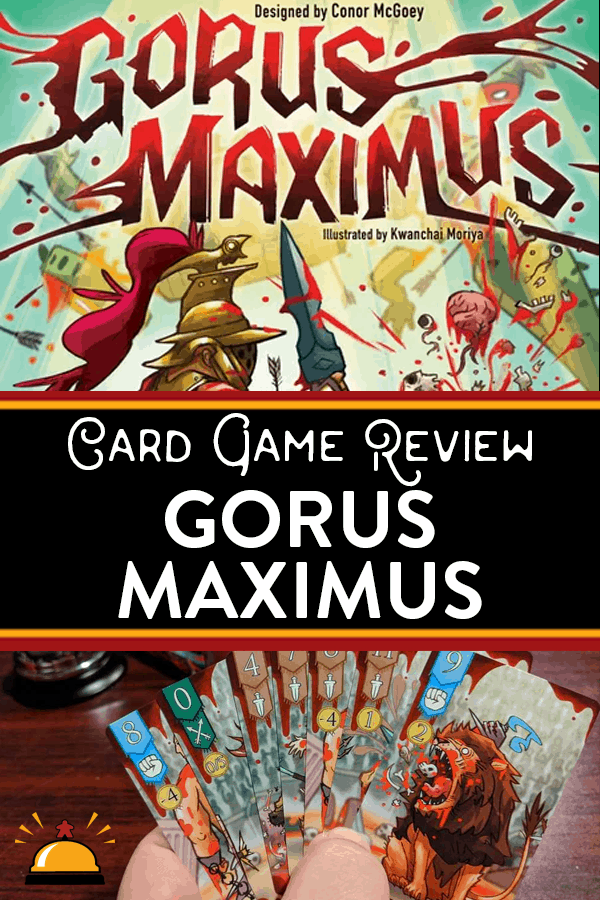