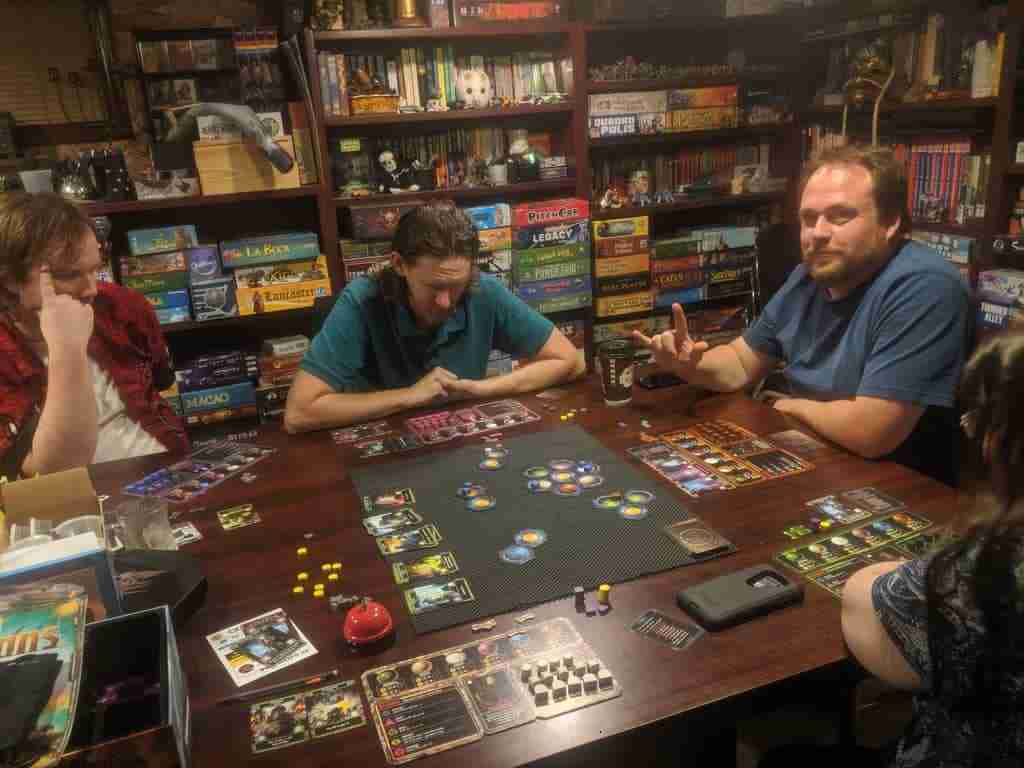 Today I am going to review the board game Horizons from Daily Magic Games, a card-driven action selection game that is not part of their Valeria line of games.

When I first saw Horizons I actually thought it was just a re-theme of one of the Valeria games and it is not.

Disclosure: Some links in this post are affiliate links. Using these links doesn’t cost you anything extra and it helps support this blog and our podcast. Daily Magic Game provided me with a review copy of Horizons, no other compensation was provided.

Horizons from Daily Magic Games is not just another Valeria card game. 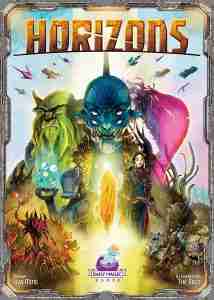 I have been a big fan of Daily Magic Games since first discovering them at Origins 2016. At that con, the first game I bought was a copy of Valeria Card Kingdoms

. After doing a demo at the Daily Magic Games booth, both Deanna and I loved the game so much we bought it on the sport.

Since then I’ve pretty much kept up with that game series. Buying all of the Card Kingdoms expansions as well as the offshoot games like Quests of Valeria

and Villages of Valeria

. We’ve yet to be disappointed by any of these games.

When I first saw Horizons

I thought it was just a sci-fi retheme of the various Valeria games. I fully expected it to be a card-based tableau builder. I was very surprised to learn that it is not. While there are cards in the game, and I could even say it’s somewhat card-driven, Horizons is much more of an action selection area, control board game.

What exactly is Horizons?

from Daily Magic Games is a sci-fi themed board game for two to five players designed by Levi Mote featuring art by Mihajlo Dimitrievski (Mico). Most games I have played have lasted about an hour with a couple being significantly shorter. 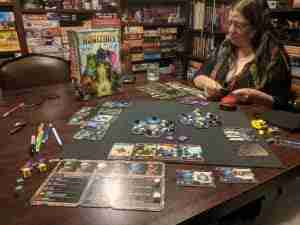 In Horizons each player takes on the role of a spacefaring race that is just starting its expansion out into a new galaxy. This galaxy is composed of a number of stars equal to the number of players. At the start of the game, each player is going to add one planet (drawn randomly) to one of the stars. Their race then picks one planet type in play to be adapted to.

From there the game becomes an action selection game where players are going to build buildings to collect resources in order to expand their control over the stars. Points are awarded for exploration, for holding majority and minority control of each system, for completing goal cards and through knowledge points gained through using alien ally cards effectively.

Each round players select two actions. These actions include:

Adapt: Learn to live on a different world type and/or gain an ally card. Ally cards represent alien species that assist you with various actions. There are five piles of aliens, one for each of the actions. After completing an action you can also use an ally of the appropriate type to gain some form of bonus. Allies can each be used twice before they are returned to the bottom of their respective decks.

Build: Build an energy collector, steel collector or colony. There are two resources in the game, energy and steel, collectors produce these during the harvest action. Colonies are worth more points for sector control (two instead of one) and drive the game end. Whenever any player builds their sixth colony the game immediately ends. Also when you build a building on a planet where someone else has already built, each player present on the planet gets one resource of their choice.

Harvest: Collect resources for your buildings. You get one resource for each collector in play. 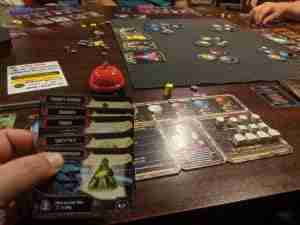 After completing their actions, if the game doesn’t end, players check their limits. Each player can only hold ten of each resource, plus five mission cards and also have a maximum of five allies in play.

As noted above the game ends when one player plays their final colony. At that point victory points are awarded for control of star systems, mission cards are scored and players count up their remaining knowledge tokens. The player with the most points wins.

Each player board in the game is two-sided. These actions are the basic actions that are shared by all of the Human sides of the boards. Each board also has an Alien side which makes the game asymmetric. The Alien sides will have one or more of the basic actions changed significantly. For example, there is one race that starts the game adapted to three planet types but cannot ever take the adapt action. Another race can never Conspire but instead gets mission cards when they adapt. There is even a race that can build colonies on the stars themselves.

So while Horizons does use cards in the form of the Alien allies, it’s not really a card-driven game. The cards give you some nice bonus actions, but at its heart Horizons is an action selection resource management area majority game. It’s a very Euro-style of area majority where you can’t really influence the other players’ actions. You just try to build somewhere before someone else, there is no conquest or battle.

What did I think of the board game Horizons from Daily Magic Games? 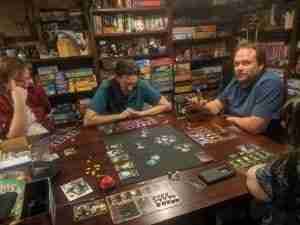 What is unique to Horizons, and is really cool, is the way you can get allies to assist you with those actions. Having different aliens for each of the basic actions and then a number of each of these aliens so that there are a variety of potential effects is the highlight of this game. It’s using these ally cards effectively that is key to winning a game of Horizons.

A surprise I wasn’t expecting from Horizons is how quickly it plays. I would almost say too quickly in some cases. Because the game ends immediately after one player builds six colonies it can end prematurely if a player just focuses on building these. We had one game that ended in under 20 minutes because the player had a goal that awarded him 10 points if all he ever built were colonies, so that’s all he did. He built six colonies as quickly as possible. Not even half of the star systems were full of planets yet and the game was over. While that player was pretty happy with themselves, it wasn’t a very rewarding experience for the rest of us. 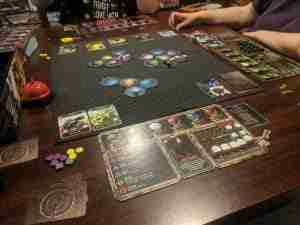 The other thing I did not expect was to prefer the Human sides of the player boards. Normally I love asymmetry in games but in Horizons the Alien boards just felt limiting instead of interesting. Rather than having some cool new thing I could do as an Alien, there were basic actions that I felt are needed to be able to do to play well that I just couldn’t do. There were workarounds but these were punishing and not fun. In this case, I think the attempt at asymmetry changed the races too much.

Overall Horizons is a rather solid game. There’s a lot here to like. The artwork and components are fantastic (I love Mico’s art, always have). The box insert is great. The rulebook was very clear. You can check out my unboxing video of Horizons and see the quality for yourself.

The game is fun. The mechanics are solid and I really like the ally system for boosting your actions. While I’m not a huge fan of the asymmetric alien abilities, everything works. At its core, it’s a good game.

The problem is that it’s just a good game. It’s fun. It’s a good way to pass the time. It’s nothing more. I’m not thinking about the game after it’s done. We are never going to be talking about that epic game of Horizons we had a month ago. There’s nothing really memorable about Horizons. It’s good but it’s not great. There isn’t anything here that feels new or refreshing.  It all works, and works well, but doesn’t wow me in any way.

Horizons is solid but sadly forgettable.

So those are my thoughts on Horizons from Daily Magic Games. Have you played this space exploration action selection game? What did you think?