Hues and Cues Review, A colour based party game for up to 10 players! 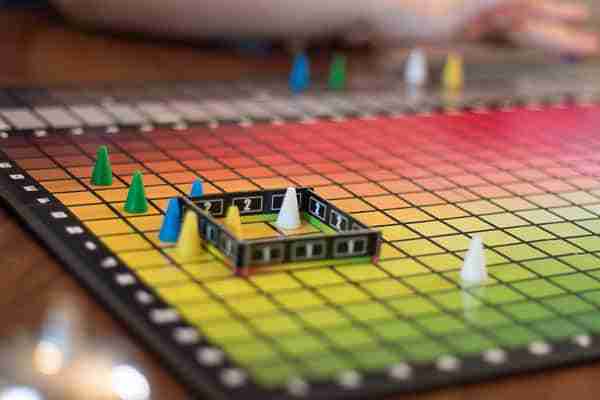 Sometimes a game comes along and you look at it and think: “How did someone not come up with this sooner?” Hues and Cues is one of those games.

The main concept of this quick to learn party game is simple. A one word clue is given and everyone picks a colour, then a two word clue clarifies things and everyone gets a second guess. Then score points for how close to the true colour you are. It’s so simple, yet so fun!

Disclosure: Thank you to The Op for sending us a copy of Hues and Cues to check out! Links in this post may be affiliate links. Using these links doesn’t cost you anything extra and helps support this blog and our podcast.

What is Hues and Cues all about? 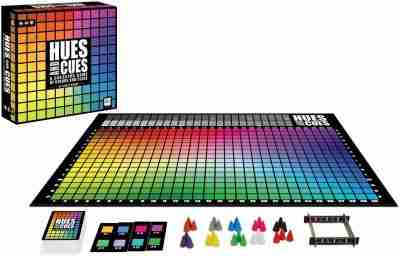 Hues and Cues was designed by Scott Brady and published in 2020 by The Op. This colourful party game plays three to ten players with games taking about half an hour depending on how long everyone deliberates on what cues to give. This party game has a reasonable MSRP of $24.99 US.

In Hues and Cues, players are trying to guess a specific colour from a grid of 480 different colours based on one word and then two word clues. Once everyone has made their guess they get points for how close their guesses are to the target colour. Dead simple.

To get a look at the large, vibrant, board and the other components in this game, check out our Hues and Cues Unboxing video on YouTube.

The component quality in Hues and Cues is on par with most mass market party games. It includes a colourful mounted board, thirty pawns in ten different colours, a huge deck of cards each of which features four different colours along with the coordinates on the board for each of them, and a cardboard frame used for scoring.

The rules are short, concise and very clear. They include lots of examples and can quickly be read at the table before your first play, letting your group dive in right away.

How do you play Hues and Cues? 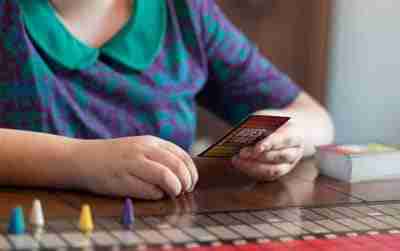 Hues and Cues is very easy to learn to play.

At the start of the game, each player takes three pawns in their colour of choice. One is placed on the score track at the top of the board.

Each round the active player shuffles the deck and draws one of the cards and chooses one of the four colours on it to be their cue colour. They then give a one word clue to the other players trying to get them to guess their colour.

The other players, in clockwise order, place a pawn on one of the spots on the board that they think best matches the cue that was given. Note each spot can only hold one pawn. 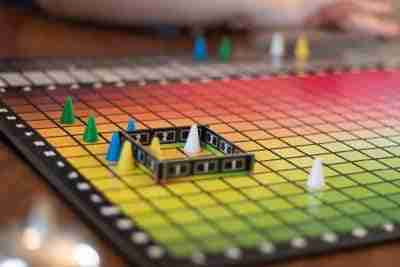 To score, the active player places the cardboard frame around their chosen colour. This frame covers a 3×3 square area on the board with the selected colour in the centre. Everyone scores points based on where their pawns are in relation to this grid. Three points are awarded for being in the middle (guessing the colour exactly). Two points are awarded for being on the inside edge of the frame (one away from the colour) and one point is awarded for touching the outside edge of the frame, including diagonally (two away from the colour). The active player then gets one point per pawn inside of the frame.

Play continues clockwise with each player getting two chances to give clues. At the end of the game, the player with the most points wins.

Hues and Cues is a fun, simple to learn, party game for up to 10 players. 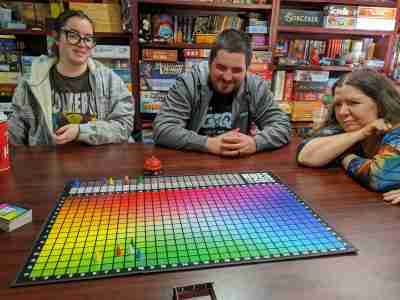 Hues and Cues is one of those games where I can’t help but wonder what took so long? The basic concept is so simple, straight forward and elegant that it’s hard to imagine that it took this long for someone to formalize it into a game.

While the concept is simple, the real question I need to answer is, is it fun? Yes, it is.

While fun I do have to say the game isn’t nearly as easy to play as I was expecting it to be. The basic concept is simple enough to grasp but coming up with good cues is surprisingly difficult. While coming up with something that fits a colour isn’t hard, trying to think of something that is uniquely that colour can prove to be much harder than you would expect.

In the games we’ve played we have also found that many people fall back on the same cues over and over again. While there’s a rule that you cannot use the same cue in the same game, that doesn’t carry over game to game. I haven’t played a game of Hues and Cues yet where someone didn’t say “Sky” for some version of blue. 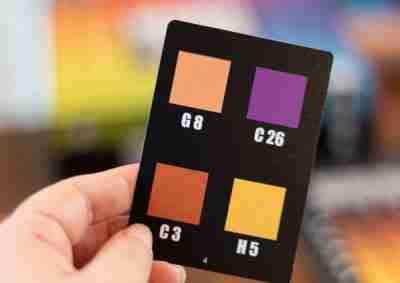 This difficulty in coming up with cues can make this game take longer than expected. Some players are going to take longer to come up with cues than others. Due to this, I think it would have been useful if each colour had a sample one word cue under them on the colour cards. Players would be free to use these cues if they want but they could also just work as inspiration when choosing clues.

Now I know some other people (my podcast co-host for one) think this difficulty in coming up with good cues is a feature of the game and not at all an issue. So it seems this difficulty in coming up with cues is going to be group dependent, with some people being faster at it than others. Even I don’t really think it’s a problem with the game, just something to think about when deciding to play as it can make the game significantly longer than the time on the box. 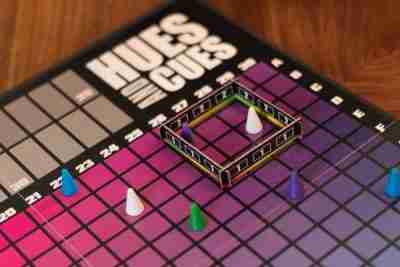 One aspect of Hues and Cues that I want to highlight is just how well this game plays online. In fact, I first discovered this game during the Gen Con Spring Showcase where I watched a group play the game live. Since then I’ve seen several other content creators streaming their plays of Hues and Cues. It seems there are two ways to do this.

The first way has the player owning the game hold up the cue card to their camera while everyone but the cue giver closes their eyes. The second way ditches the cards all together and lets the players pick the colours they want on their turns. Due to the fact that the board has a coordinate system on it, it becomes very easy for players to call out their guesses and to place the frame.

To back up the fact that this game is perfect for playing remotely, Hues and Cues was even nominated for the Golden Geek Best Zoomable Game award in 2020. 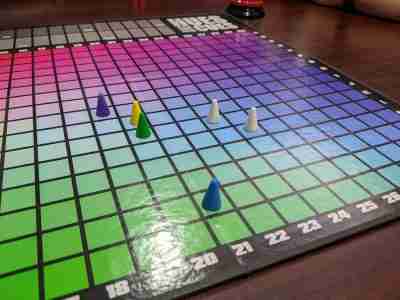 I do have one minor component quality complaint about Hues and Cues which is that the board is very glossy and glare can be an issue. We found that under certain lighting (like for instance the pot lights in my game room), where you are sitting and where the glare is on the board can affect how the colours look.

Due to this glare issue, I have been very tempted to hit my copy of Hues and Cues with a coat of Testors Dullcote.

Overall despite a few minor quibbles Hues and Cues has proven to be a great game for our game groups. I’m personally not a big fan of party games and due to that I don’t own a lot of them, but I’m happy to add Hues and Cues to that small collection.

If you are a party game fan you should be rushing out to pick up your own copy of Hues and Cues. This is a simple and elegant game that features a theme you don’t see often. 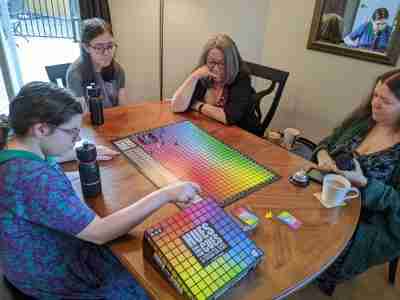 If you are more of a hobby euro gamer like me, I also suggest you check out Hues and Cues, because it may just win you over. I found it to be a lot more engaging than your standard trivia or take that style party game.

If you happen to be looking for a detailed colour based game that requires you to know Pantone colour codes and CMYK values, you aren’t going to find that here. Hues and Cues is a light party game featuring colours, which doesn’t go into any more depth than what colour red do you think of when I say “Macintosh”.

In general, I prefer heavier games to party games but now and then a party game comes along and hooks me. Hues and Cues did this as did Telestrations, which is also from The Op.

What’s a game you ended up enjoying a lot, despite it not being the type of game you usually play? Tell us about it in the comments below!