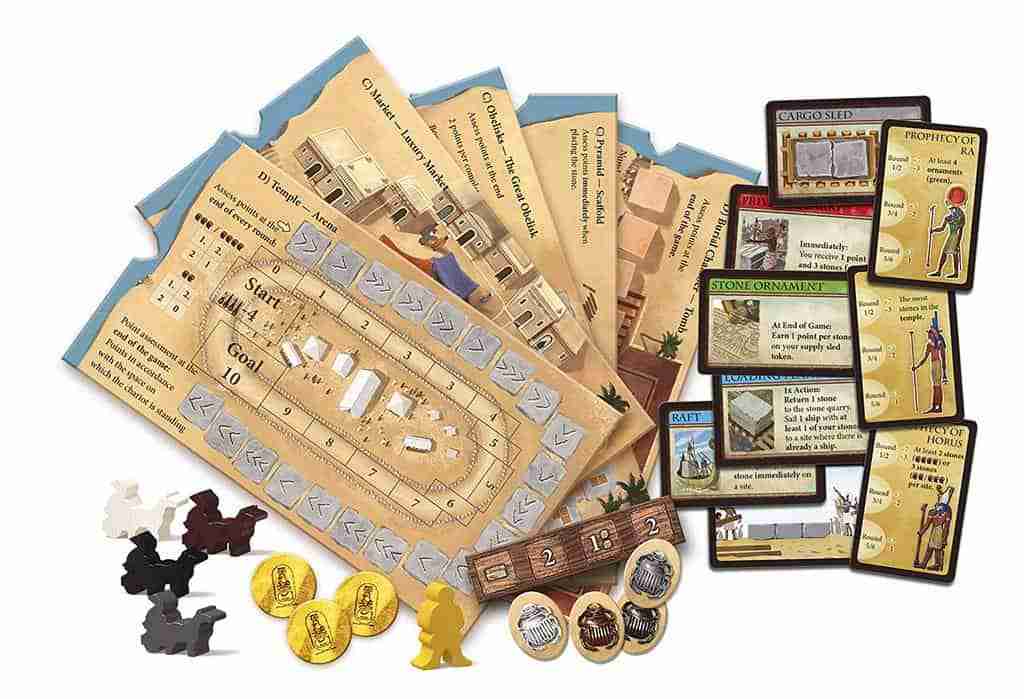 Imhotep has become one of my new favourite gateway board games. I’ve enjoyed playing it with gamers new and old. The expansion, Imhotep: A New Dynasty, adds a series of optional modules to the base game.

With A New Dynasty, you get new C/D sides for all of the player boards in Imhotep adding a crazy amount of variety to the game. You also get rules for the Egyptian Gods, which adds a betting element to the game.

Disclosure: Some links in this post are affiliate links. Using these links doesn’t cost you anything extra and it helps support this blog and podcast. As an Amazon Affiliate, I earn from qualifying purchases. Thames & Kosmos provided me with a review copy of this expansion.

What do you get in the A New Dynasty Expansion for Imhotep?

Imhotep: A New Dynasty was designed by Phil Walker-Harding, the same designer as the original game. It features art from Miguel Coimbra, Martin Hoffmann, Michaela Kienle and Claus Stephan. It was published in 2017 by Thames & Kosmos.

If you want a good look at what you get in this expansion I recommend checking out our Imhotep: A New Dynasty Unboxing Video on YouTube.

The first thing to note about this expansion is that it comes in a really oddly shaped box. I have no clue why it’s the size it is. It’s a long rectangle that will not fit in the core game box. That’s not really a problem though as all of the stuff in this box will easily fit in the core game box even with the original silly box insert.

Inside the box, you will find a rather tall set of rules. This rulebook is eight pages long including one reference page. These are very well written and clear using colour coding to differentiate each new rule section.

The game also includes a small bag of wooden components. There is a yellow Imhotep meeple and Chariot meeple in the four different player colours. These are nice solid components, though the chariots can be mistaken for squirrels if looked at the wrong way.

Under the rules are some baggies. Thank you, Kosmos for including those. I love the fact that more and more companies are including baggies with their games nowadays. Under these are the punchboards which are not as tall as the box, which makes the box size make even less sense. 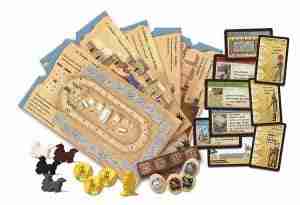 There are quite a few things to punch out with this expansion. Significantly more than the base game. There are five new game boards but also a bunch of chits and tokens. Gold, polyominoes, square numbered chits, etc. The punchboards are very well cut and were actually falling off the sprues as I was showing them off in the unboxing video.

Finally, we have some cards. These include the new god cards, some new market cards, and some cards required for the various new board sides.

How does the Imhotep: A New Dynasty expansion affect gameplay?

The A New Dynasty Expansion contains three modules. The first module is a new set of player boards, the second is a set of seven Prophecy of the Gods cards, and the third consists of fourteen new market cards. You can add any or all of these modules to the core game. 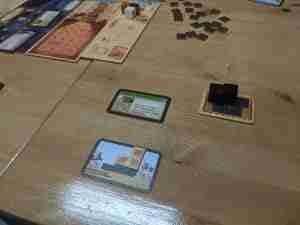 The new market cards are the easiest thing to add to the base game. You just mix them in with the existing market cards and you are good to go. The new market cards include some cool stuff like a Cargo Sled that lets you store more stone and a raft that lets you dock a boat where there is already a boat. I was pleased to see they even included some more Statue cards so that the deck doesn’t become unbalanced making Statues harder to find.

The Prophecy of the Gods cards adds a betting element to the game. At the start of the game, three of these cards are drawn and put in play. Each of these lists some form of condition based on players having so much of something somewhere. For example to score the Prophecy of Ra a player needs to have at least four ornaments (green cards). As another example, the Prophecy of Isis requires a player to have the most stone out of any player at the Temple.

At the start of the game, players are given two scarab tokens. Twice during the game players can place one of these on one of the god cards to predict that they will have the required thing by the end of the game. The earlier that players place their scarabs the more points they are worth. To stop players from just guessing early if players finish the game and don’t fulfil the prophecy they lose points instead of gaining them. 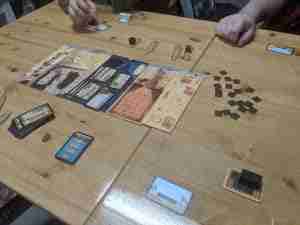 The final part of A New Dynasty Expansion is the biggest part and that’s a replacement board for each of the boards from the core game. These are C/D boards for each of the five locations. Each of these is totally unique and rather different from the original boards. Each has its own set of rules and many of them require you use some of the special new components that come with the expansion.  For example, the palomino pieces are used with the C side of the Obelisk board, The Great Obelisk. When players deliver stone here they collect polyominoes that get stacked Tetris style on a personal Obelisk card. At the end of the game, players score two points per completed row of three in their personal obelisk.

As another example, the Black Market, which is the D side of the Market board, has two normal card spots and also two spots where you place three face down market cards. When players select one of these face down spots they get to look at all three cards and pick one. The D side of the Temple features an Arena where you take part in a chariot race, with the stones delivered determining how far your chariot moves each turn.

I’m not going to get into what each of these boards does. That’s simply too much to cover in this review. I will just say that they are all unique and add a great deal of variety to the game. With these in play, you now have 1028 different possible combinations of board setups for your copy of Imhotep.

Having now played Imhotep Builder of Egypt a number of times with A New Dynasty I have to say that I really dig this expansion. 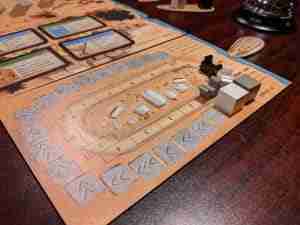 Starting with the new market cards. These are all great and add some interesting new twists to the game. The most interesting and powerful is that ability to dock a boat where one has already been docked. I see no reason not to toss these cards in with the original market deck and use them in every game, even if you aren’t using anything else from this expansion.

Next up are the Prophecy of the Gods Cards. To me, these are the weakest part of this expansion. I personally thought they were an interesting addition that gave players something to aim for when playing but I’ve had a couple of people I’ve played with that really did not like them at all. So it looks like this particular module’s popularity will very much depend on your group. Try them out and if you dig them keep using them, if not leave them in the box. There’s plenty of other good stuff here, so skipping over those seven cards doesn’t feel like a waste.

This leaves the new boards. Overall I dig them. What’s important to note though is that these boards are meant for experienced Imhotep players. While none of them is hard to understand, I would say that every single one of them is more complicated than the base boards. This is true not only in how you use the boards during play but also in the strategy and tactics required to optimize the use of each board during play. I would also consider many of the boards in this expansion fiddly.

With the base game of Imhotep, there aren’t a lot of components. There are stones, the boards, some cards and some boats. With this expansion, you add in chariot meeple, polyominoes, new player specific cards, wooden chits you stack between stones to make scaffolding, bingo like number tiles, and more. With A New Dynasty, there’s just more bits to set up, more bits to track during play and more bits to clean up. 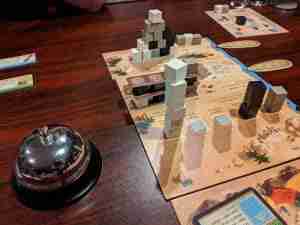 As I think should be pretty clear by this point I, overall I think this is an excellent expansion for Imhotep and one that I’m very happy to have in my collection. The new market cards will be staying mixed in with my original cards forever. The other parts of this expansion I will be pulling out and using, or not, depending on who I’m playing with. With a new player, we’ll stick to the A/B boards from the original game. With players with more experience, I will be mixing and mashing everything together.

If you own Imhotep Builder of Egypt I see no reason not to pick up this expansion. Just the replayability of having 1028 possible board combinations will make it worth it.

Have you tried out this expansion for Imhotep? What did you think? Let us know in the comments below!