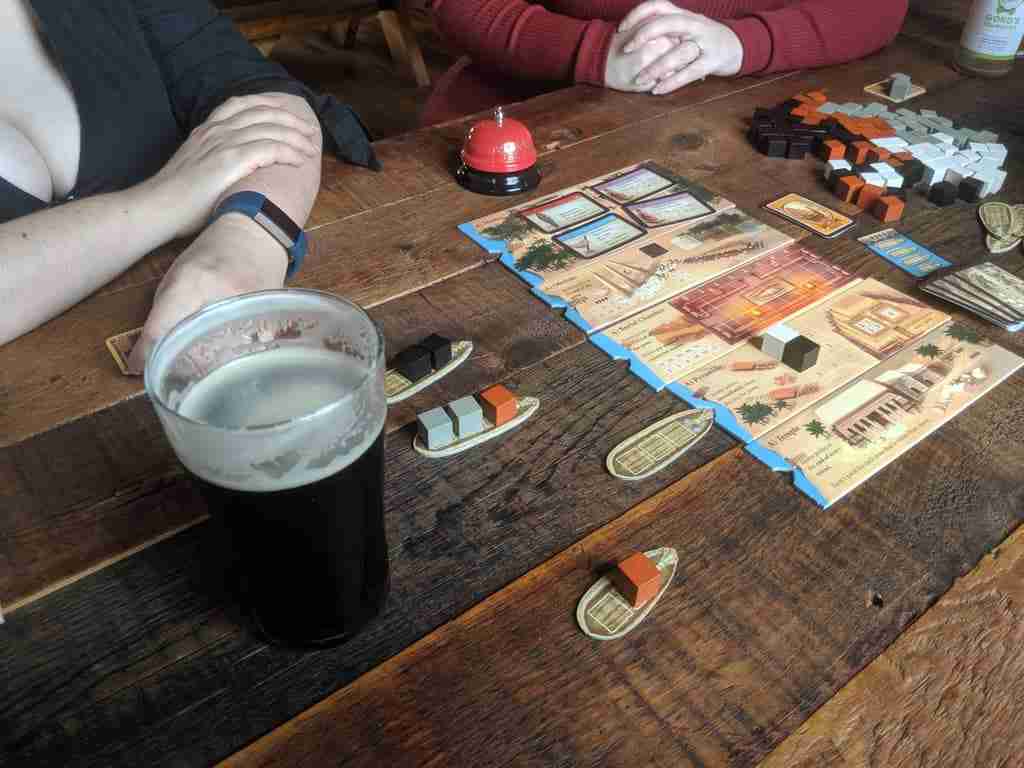 A look at the board game Imhotep Builder of Egypt from Thames & Kosmos.

This past Sunday, I got to check out Imhotep for the first time. I played twice, both times with four players, and thought I would take some time today to share my initial thoughts on this tabletop game.

Disclosure: Some links in this post are affiliate links. Thames & Kosmos sent me a copy of Imhotep for me to review. No other compensation was provided.

My first play of Imhotep was on a double date night at a brewpub. 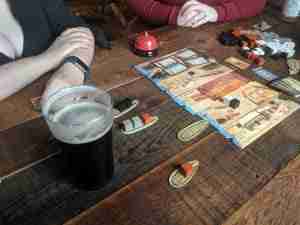 This past Sunday, Deanna and I had another double date night with Tori and Kat, friends of ours that people will recognize from our Gloomhaven live streams and videos. We met up at the Sandwich Brewing company, had some beers, had a couple of their amazing charcuterie boards and played some board games. Those gameplays included two plays of Imhotep Builder of Egypt

This was my first time playing and teaching Imhotep and it was the first time playing for all of the other players. I had been hearing good things about the game with many reviewers and podcasters noting that it was an excellent gateway or family weight game. This reputation is one of the reasons I brought the game out Sunday, for a couple of reasons.

First off, as discussed in my Dos and Don’ts of Tabletop Gaming at Cafes and Pubs article, gateway games are the perfect games for bringing out to a social event like this. You want games that are not only quick to play and easy to teach but are also light enough that everyone doesn’t have to be completely focused on the game to enjoy it. You want to be able to have a conversation and enjoy each other’s company while playing.

The second reason I brought a family weight game like Imhotep is that Tori and Kat are always looking for new games to introduce to Tori’s mother. She is a long time gamer but new to hobby board games and has started to fall in love with them. Kat and Tori already have her hooked on Splendor and Azul and are always looking for new lighter games to introduce her to. I thought Imhotep might be a perfect fit.

My initial impressions of the board game Imhotep from Thames & Kosmos

As noted earlier we played Imhotep Builder of Egypt

twice on Sunday, and that’s all the plays I have for this game so far in total. So keep in mind that my thoughts here are only based on two plays.

Right off the bat, I was impressed by the production quality of Imhotep. Nice thick cardboard boards. Huge wooden cubes (they are like four times larger than the “resource cubes” you find in most Eurogames). The instructions are clearly written, with lots of images of the game and components and lots of examples.  The cards are smaller “hobbit” sized cards of adequate thickness. The only thing I found lacking was some form of reference card listing the four actions a player can take on a turn. 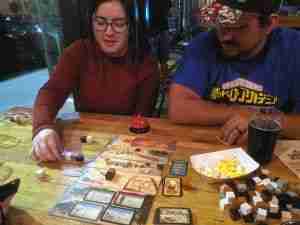 In Imhotep, players are building Egyptian monuments including, the pyramid, a temple, the burial chamber, and obelisks. This is done by delivering stone to the various building sites and/or the market. Each turn players either collect stone, place stone onto a boat or sail a boat to a site. The number of boats available and the space on them changes each round. Once a boat sails to a site the stone is unloaded and points may be scored. Each site can only hold one boat.

After six rounds of shipping, the game ends and final points are scored. Each of the different monuments scores differently. Some score during play and others at the end of the game. In addition, some market cards also give end game scoring.

The entire game only takes minutes to teach. The actual actions a player can take are all very simple. It’s figuring out what each of the five delivery sites does that can take a bit of time to learn. The scoring itself is just complicated enough that we found that a second play was required to really understand all of the various ways that players can score points.

Each of the different site boards is two sided. Each has an A side and a slightly more complicated B side. At this point, I’ve only tried the A sides of all of the boards. 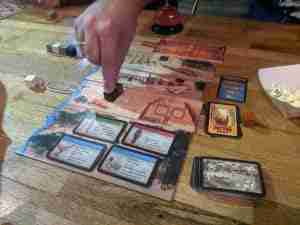 . Having played the game now I still think there are some similarities. The boat loading and shipping mechanic is very similar to the truck loading in Zooloretto, except in that you are loading animals for delivery to the player’s zoos. The resulting strategies are what is most similar. Do you load a boat with your stone, do you make sure to get one of your stones on a nearly full boat before it ships, or do you ship a boat without any of your stone just to send your opponents somewhere they may not want to go? That thought process was my favourite part of Zooloretto and is also my favourite part of Imhotep.

Overall I was impressed with Imhotep Builder of Egypt. While it may be a bit more complicated than say Azul or Sagrada I do think this is a great family weight or gateway game. Having to learn five different player boards is what creates this additional weight, and that’s with only learning the A sides of the boards. Adding the B sides ups that complexity even more, but is awesome for adding replayability to the game.

I’m actually really looking forward to playing it some more. Trying it with less than four players and discovering the B sides of the various site tiles.

So those are my thoughts on Imhotep Builder of Egypt

after only a couple of plays. Have you played Imhotep? What did you think? Let us know in the comments.

Oh, and one more thing, at this point, Tori and Kat are pretty sure this may indeed be the perfect game for Tori’s mom.