King Me! – A Family Game from Ravensburger that is an Evolution of Checkers 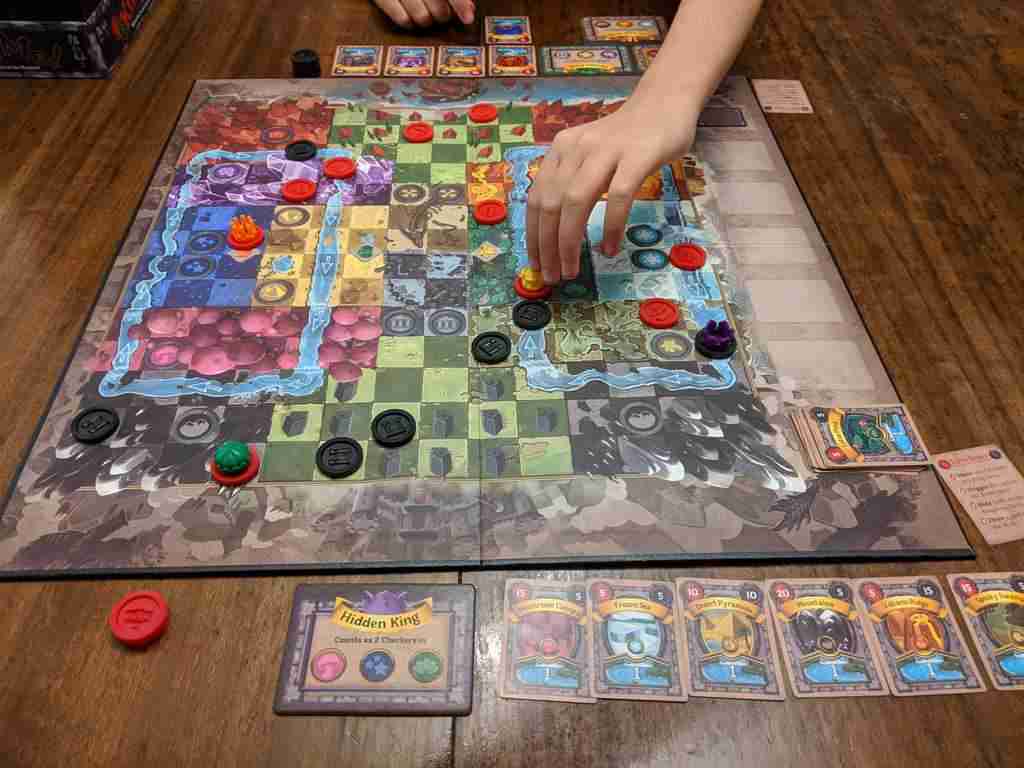 Draughts or Checkers as it’s better known in North America has been around for over 5000 years and continues to be a popular board game even now. Today I’m going to review King Me!, a game that takes the basic mechanics of Checkers and turns it into a family weight area majority boardgame.

Like it’s predecessor, Checkers, King Me! from Ravensburger only plays two players. While the basic mechanics may be the same, there’s a lot more to King Me! than moving diagonally and jumping over the opponent’s pieces.

What do you get with a copy of King Me!

King Me! was designed by Prospero Hall and published by Ravensburger in 2019. It plays with only two players and a game will take under an hour, with the time being very much based on how much thinking time players take.

We picked this game out as a gift for my youngest daughter and I recorded a special King Me! Unboxing video on YouTube with her. I suggest checking that video out to see just how excited she was to check out this game and also to see the components for your own eyes.

The King Me! rulebook is a three page, two-sided, fold-out with a total of five pages of rules, including lots of examples using actual game components.

When you first open the box and look at the playing board you will notice that it is a very nice, rather large, mounted board. Here you will immediately see a significant difference between this game and Checkers. While the board is divided up into a grid of light and dark squares, it is also further divided into a number of different coloured territories.

Next, we have four plastic crowns in four different colours. Each one is moulded differently. There is also one thick, two-sided, cardboard tile to go with each of the crowns. 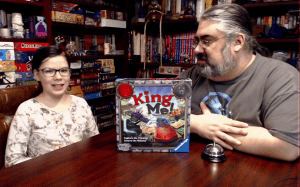 There are twelve checkers for each player, in red and black. Each colour also has a different symbol on it. The black features a castle and the red features a boat. The backs have a ring which is designed to hold one of the plastic crowns.

Finally, there is a set of Hobbit-sized cards. These include two rule summary cards, one card for each zone on the board and a number of river cards. These cards are separated into four sets based on the weapons shown on the card backs.

All of this comes in a pretty basic trench style cardboard box insert. It works to keep the board separated from the rest of the components.

How does King Me! change the basic game of Checkers? 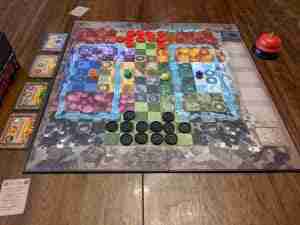 In King Me! the black player represents a kingdom whereas the red player represents an invading army. The board is completely symmetrical and divided up into a number of different regions which are denoted by colour and artwork.  Players start with all twelve of their checkers on the board, placed on the spots showing a campsite. The cards are split into four decks based on their backs, shuffled, and then stacked in random order and placed, face down on the board. No cards are flipped up at this point.

In addition to standard light or dark spaces, there are a number of fixed checkers printed on the board. These can be jumped like any other checker and make for interesting ways you can quickly move across the board. There are also two rivers on the board, one to each side. Checkers that are on these spots at the end of a turn will tend to move along the river one or two spots clockwise.

Each turn players can move two pieces. In general, these need to be two different pieces, but a king can be moved twice in a row.

Movement is what you would expect from Checkers: diagonal only. Though in King Me! any checker can be moved in any diagonal, backwards or forwards, you don’t have to always move towards the other side of the board.

In addition to moving one square, you can instead jump over another piece, yours or your opponents, as well as jump the static checkers printed on the board. You can make multiple jumps in a row and it will only count as one of your two moves. If an opponent’s piece is jumped over it is captured and if an opponent’s king is jumped you may steal its crown.

Four spots on the board hold crowns and the first person to land in one of the two squares holding one gets to take the crown, flip their piece and turn their piece into a King by placing the crown on it. Kings can move twice in a row, break ties during scoring and count as two pieces in three of the different terrain types. Each king specializes in a different set of terrain types, as indicated on its matching tile. 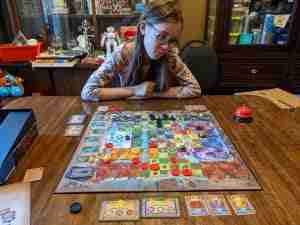 There is one terrain type card for each of the terrain on the board. Each card shows its terrain type (identified, by both colour and symbol) and a number of points for each side. These points are based on how deep on the opponent’s side of the board the terrain is on. To claim one of these cards, a player has to have more checkers in that terrain than the opponent when that card is resolved. As noted earlier Kings break ties and also count as two checkers in their favoured terrains.

After resolving the current event card, all of the cards on the event row slide down and a new card is revealed. The game ends after the last card is resolved.

Due to the fact that the event row is six spaces long, players always have a lot of foreknowledge as to what is going to be coming up, when the rivers will move, and what terrain type will score next.

At the end of the game, players add up their points on their captured terrain tiles, plus five points per king they have in play and also five points for each captured piece they have taken from their opponent. The player with the most points wins.

Why I think King Me! is a fantastic evolution of Checkers 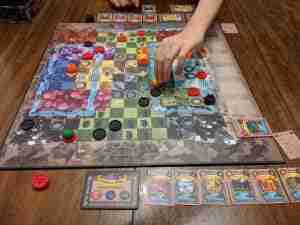 I have to admit I didn’t know much about King Me! when we picked it up for Gigi. We were browsing the Ravensburger site and had picked out Woodlands and Villainous and happened upon this game. I took a look at the back of the box and noted that it was an update to Checkers and that intrigued me. Deanna and I had just been playing Checkers the previous weekend as part of a trip out to Kingsville so we went for it.

Now, having played the game with both of my girls a number of times, I’m very pleased to say that this is an excellent update to the classic game. King Me! takes the basic mechanics of Checkers and improves upon them in many ways.

The ability to move all of your pieces both forward and backwards greatly increases the number of possible moves. The ability to jump not only the enemy but your own pieces and also the static checkers on the board gives you a much wider range of mobility than Checkers. The biggest improvement though is the area majority mechanic and that’s what really makes this game shine. 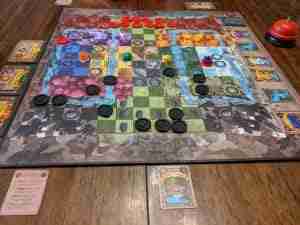 I love the amount of strategy that is present in King Me! Cards sit on the event row for five turns before they are resolved and this gives you plenty of time to try to get your pieces into position. Seeing how the rivers are going to move, and potentially using them to get your pieces into the right spot at the right time, can also be key. Along with this high level of strategy is a solid amount of tactical thinking required in reacting to what your opponent is doing.

The best part about all of this is despite being highly strategic and tactical it’s also very approachable. I was easily able to teach both of my kids to play, and not only play but play well. At this point, my oldest daughter is the best King Me! player in the house, beating me more often than not. The game is also simple enough that my kids can break it out and play on their own without one of us having to watch or moderate in any way.

While designed for families and playable by kids this game is deep enough to be greatly enjoyed by adults, and even hardcore gamers. King Me! really is a great, strategic, area majority game for almost all ages and experience levels. 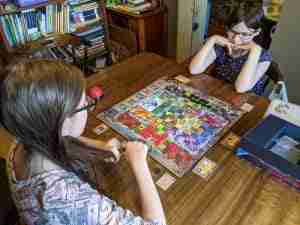 If you are a fan of Checkers at all you need to pick this up. If you like abstract strategy games at all you should probably pick this up. If you like area majority games this may well be a winner for you. If you are looking for games you can play with the entire family as well as gamers King Me! is a great place to look. Unless for some reason you really hate Checkers, I think everyone should at least give this game a shot.

I was surprised by just how great a game King Me! is, coming from such classic board gaming roots. What’s the last game that surprised you by being so much more than you expected? Let us know in the comments! 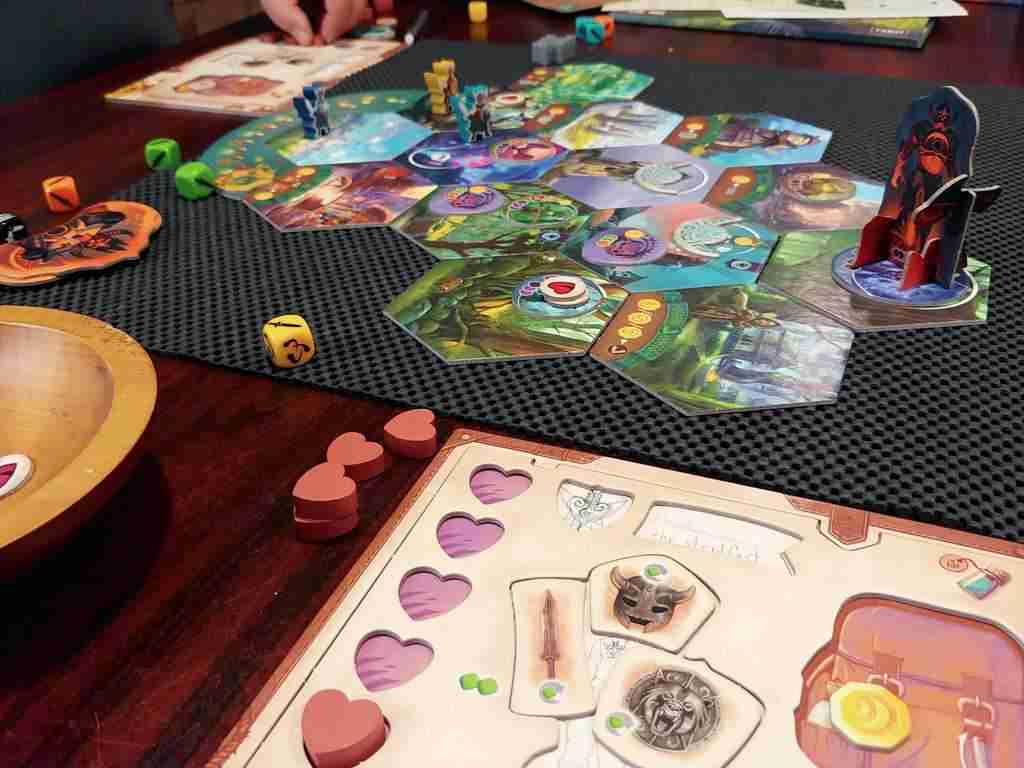 Chronicles of Avel Review, A look at this cooperative fantasy family game as well as the Adventurer’s Toolkit Expansion and Hero’s Treasures Promo Pack 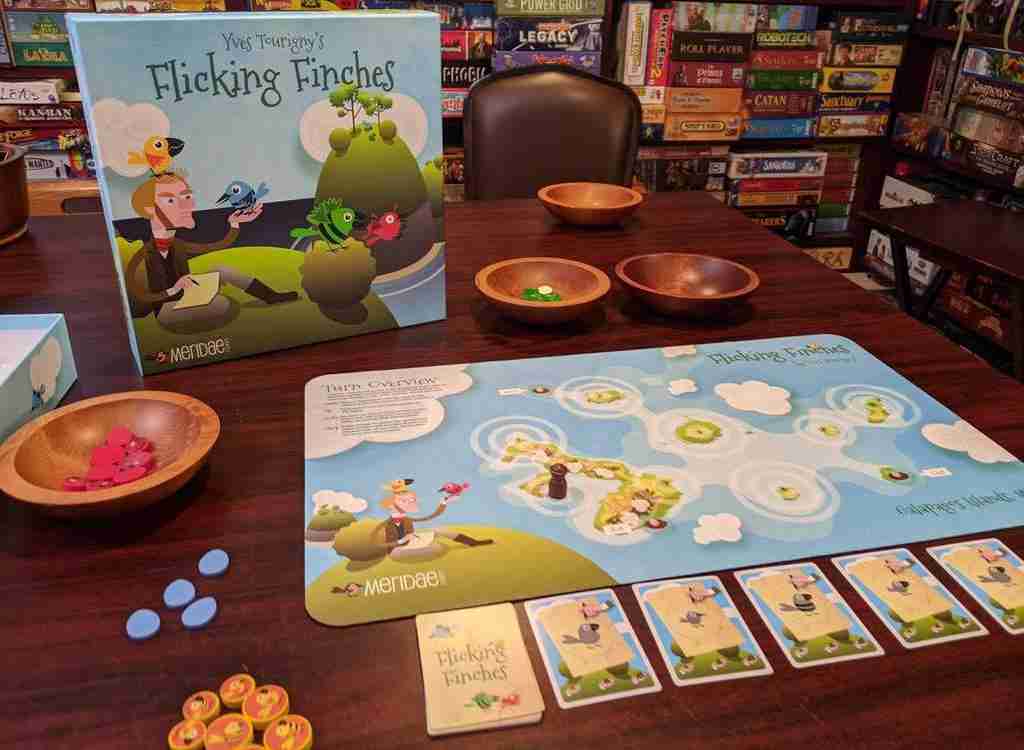 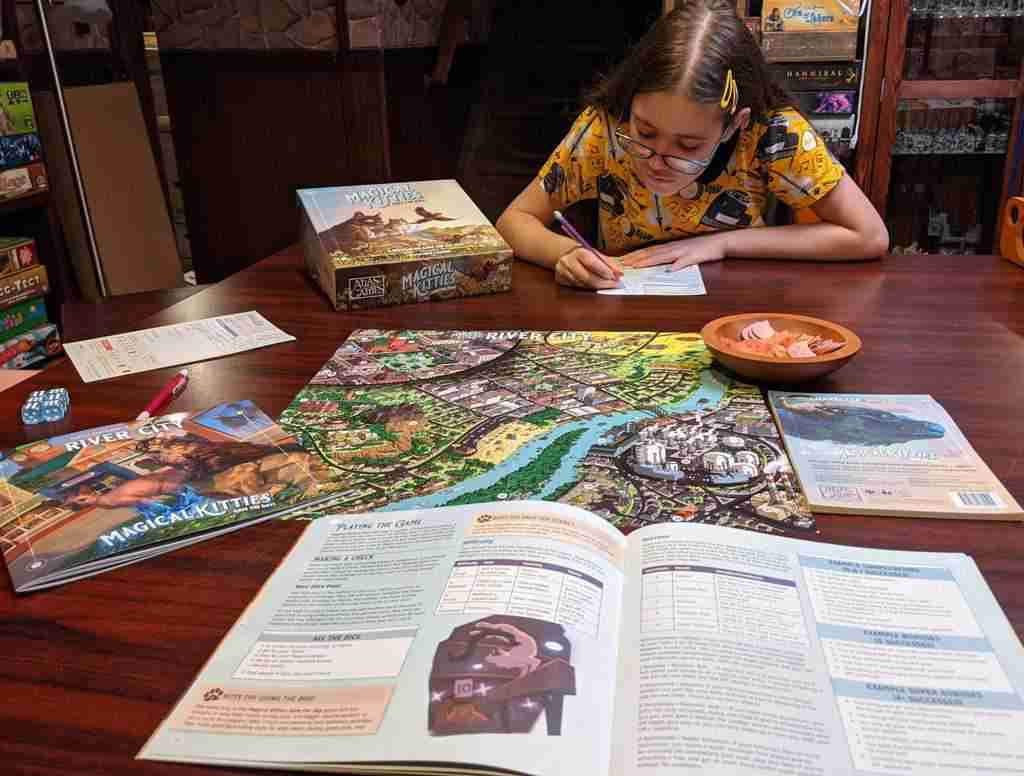 RPG Review: Magical Kitties Save The Day, an RPG for all ages where you play magic cats