King of the Dice, a Great Kids’ Push Your Luck Dice Game from HABA – Review 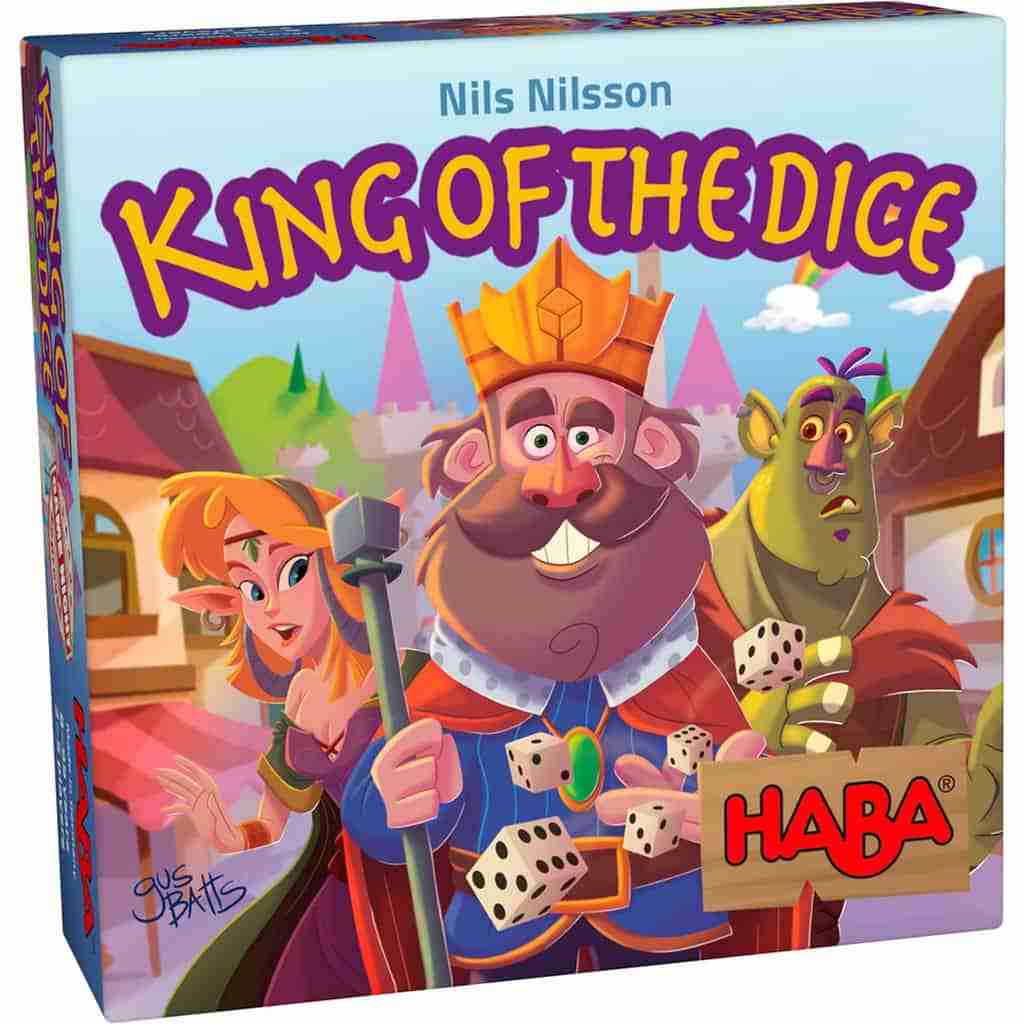 HABA Games has launched a new series of “Game Night Approved” games aimed at families. Games that are fun for adults as well as kids. King of the Dice is one of the board games in this series.

King of the Dice is a fantasy themed, push your luck, dice game that I’ve had fun playing even without the kids around.

What comes in the box for King of the Dice from HABA?

King of the Dice was designed by Nils Nilsson featuring art by Gus Batts. It was published by HABA in 2017.

The best way to see what you get in this small box would be to check out our King of the Dice Unboxing video on YouTube.

King of the Dice

comes in a small box that doesn’t have a lot inside it. On top of everything is the rulebook. This is surprisingly thick until you realize it’s written in two languages, French and English. The actual rules are four pages and have a ton of examples. There’s a lot of graphics here, every card type is highlighted and described.

Under the rules is a cardboard box insert, which seems like a bit of overkill for a box this small, but I guess it will hold the cards somewhat in place when packed away. There is also a baggie with six wooden dice. These are almost standard D6. They have pips for 1 to 6 on them but each side is also colour coded red, green or blue. There’s an equal number of each pip in each colour over the six dice. The quality of these dice is topnotch.

The other thing in the box is a sealed pack of cards. There are actually three different decks. A deck of Citizens, a deck of Domains, and a deck of Scoundrels. The location cards are horizontally oriented while the rest are portrait. The artwork is very bright and colourful with a cartoon feel that I really liked. Icons on the cards are large and very clear.

Playing King of the Dice a family weight game from HABA. 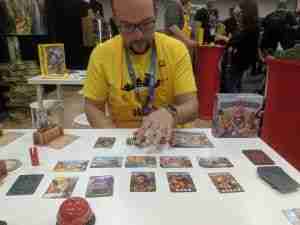 Every game of King of the Dice

starts by laying out the Domain cards. There are three of each of the five Domains and they are stacked so that the lowest value card of each Domain type is on top. These get laid out in a row in a set order which I never remember and always have to look up in the rulebook.  Under each Domain stack, you are going to draw and place a Citizen card drawn randomly from the Citizen deck.  Next to these cards you shuffle and put the pile of Scoundrel cards face up so everyone can see the value of the top card.

Each turn players roll all six dice and try to match the requirements shown on the bottom of one of the Citizen cards. Depending on the colour and fantasy creature each card represents you will need different things. Fairies need sets of different colours, Dwarves want dice with all the same number on them, Elves require straights, etc. Each Citizen is worth points with the more difficult dice combinations being worth more points.  Players can re-roll some or all of their dice, up to two times, trying to match one of the cards in play.

If players manage to make a match, they get to take that Citizen card and put it in their scoring pile (there is one exception, the Dragon which is worth negative points and you place it in an opponents pile). Players can also get a bonus; if the Domain the Citizen was under is the same colour as that Citizen the player gets to claim the Domain card as well.

When a player can’t make a match after three rolls, they are forced to take a Scoundrel card. These are worth negative points. After a card is claimed the Citizens in play all slide down to fill the gap from the card taken or if a Scoundrel was taken the last Citizen in the row is discard and everything slides down one Domain. A new Citizen is placed under the first Domain and the dice are passed to the next player.

Play continues until two stacks of Domain cards are claimed, the last Scoundrel is claimed, or the deck of Citizens runs out. At that point, players add up all the cards in their scoring pile.

To keep things interesting, some of the Citizen cards have special abilities. Elves let players take another turn, Fairies only score points if you have a lot of them, Dragons are played against opponents, and so on. For the first few games, you will probably have to look these up in the rules, which contain a card by card reference.

My thoughts on my first Game Night Approved game, King of the Dice.

I first encountered King of the Dice

at Origins 2019. There, T from HABA told me all about this new line of games HABA was really pushing, their Game Night Approved games. Games that are meant to be for family game nights and promised to be more fun for adults than HABA’s usual line of “yellow box” kids’ games. Due to this, the main thing I want to judge King of the Dice on is whether or not it’s fun for adults. 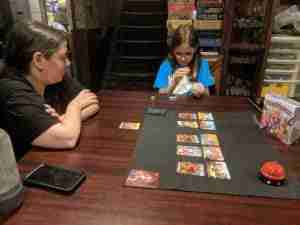 To that end, you just need to read through some of my week in review blog posts or listen to our podcast episodes in the weeks after I got this game. While, yes I did play it with my kids, King of the Dice has hit the table way more often at public play gaming events than it has at home.  I have found that King of the Dice is a great gateway game for non-gamers as well as a good filler game for experienced players.

What I like most about King of the Dice is the fact that there is some strategy and thinking involved. Every roll you are working out the odds in your head trying to determine which card to go for. Do you go for an easy low scoring card, or was your first roll really close to winning one of the harder, higher point, cards? Then there are the Domain rules. Sometimes you may want to hold off grabbing a card, just so you can wait until next turn when it’s moved down the Domain track and may be worth more points. But if you wait, then there is always the possibility that anther player will grab it before you. 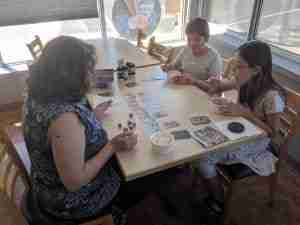 These are the same things that I think make this for a great game for kids. What I really like here is the fact that the dice have colours as well as numbers on the sides. This adds a totally different mix of probabilities to this dice game that isn’t in other push your luck games. Seeing my kids realize that it’s easier to roll a specific colour than roll a specific number was a wonderful thing. Both of my girls enjoy this game but my youngest is the one that really loves it.

There is one thing you do need to be aware of with King of the Dice. It’s basically a Yahtzee based dice roller and due to that, there is a high random factor. Sometimes there’s going to be nothing you can do due to a bad die roll. I’ve found over multiple plays that the game can be particularly brutal if you get a row of Citizens out that all have similar difficult requirements. I think Deanna put it well when she said, “I prefer games where I feel I have more control of my destiny.” 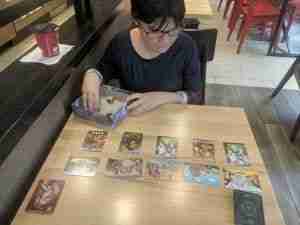 What randomness like this does do, is even the playing field. It’s what gives an eight-year-old a chance to beat her heavy Euro loving mom in a game once in a while. I also find the randomness in King of the Dice to be lower than many other similar dice games, like the aforementioned Yahtzee and Roll For It from Calliope games. The variety of different card types usually means that there is something easy you can go for if you don’t want to push your luck too far.

Overall I’m very glad I picked up King of the Dice while I was at Origins. It has seen a steady amount of gameplay since and I expect it will see more in the future. Both with my family and playing with my kids as well as playing with adults. It really is a game that kids love and adults can also enjoy.

Have you played King of the Dice

? What did you think? Do you have a favourite kids’ game that’s also fun for adults? I would love to hear about it in the comments.