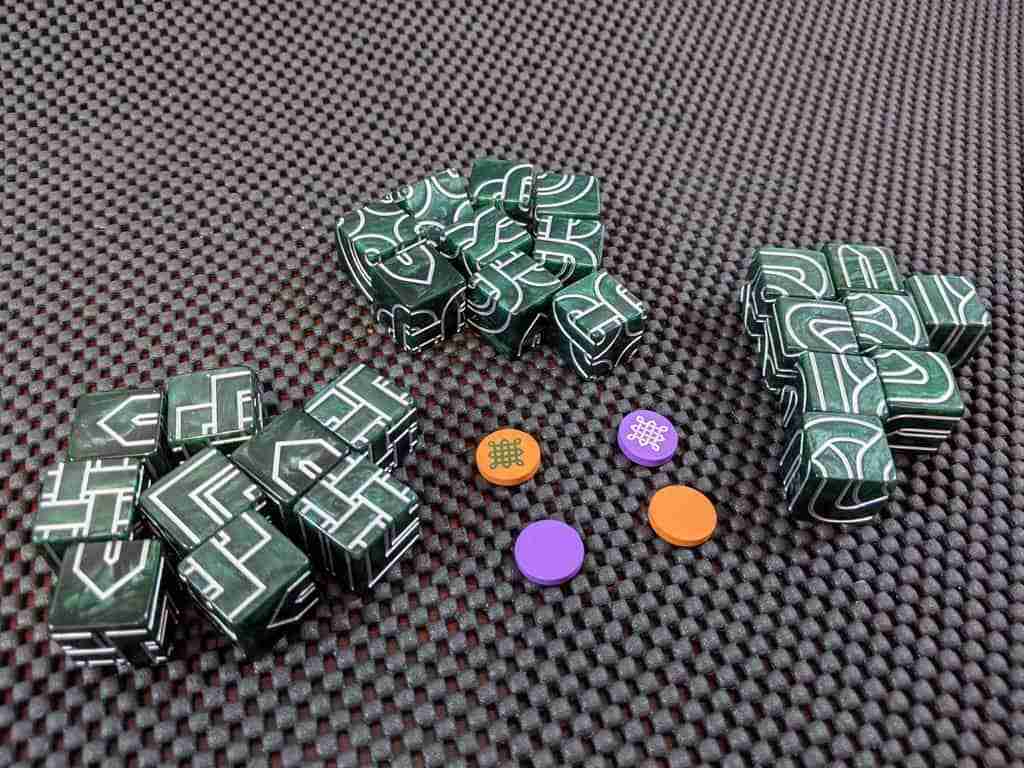 This expansion, which does require a copy of Knot Dice, includes three new dice types as well as new puzzles and games to play with Knot Dice.

Disclosure: Thanks to Black Oak Games for sending me a review copy of Knot Dice and Knot Dice Squared. Some links in this post are affiliate links. Using these links doesn’t cost you anything extra and it helps support this blog and podcast. As an Amazon Affiliate, I earn from qualifying purchases.

What do you get with Knot Dice Squared? 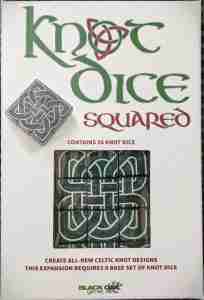 Knot Dice Squared, along with the original game Knot Dice, was designed and published by Matthew O’Malley under his company Black Oak Games. These dice were originally Kickstarted in 2018 and hit retail this year in 2020. This expansion does require a base set of Knot Dice to play. By combining this set with the original Knot Dice you get a number of games and puzzles that will play from one to six players.

To get a look at the new dice included in this set be sure to check out our Knot Dice Squared unboxing video on YouTube.

You may also want to check out my review of Knot Dice if you aren’t familiar with these custom dice sets from Black Oak Games.

The dice here are just as nice as the ones in Knot Dice. They are larger than a standard die, measuring 20mm squared. The knotwork patterns are deeply etched into the dice and inked with silver. The dice themselves are coloured to look like connemara marble. 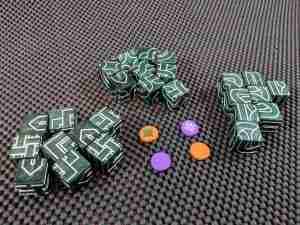 How has Knot Dice Squared expanded on Knot Dice? 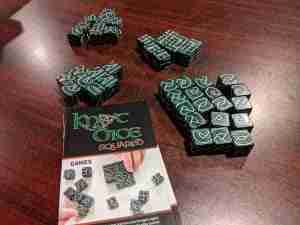 As noted above, the main thing you get with a set of Knot Dice Squared is three new types of patterned dice. There are two sets of new patterns and a third set of bridging dice that let you connect these new dice to the original set. These dice are as impressive in both look and quality as the original.

Along with these new dice, you get two new books of games and puzzles.

The puzzle book includes six different types of puzzles. One of which is totally new and five of which are the same as the puzzles in Knot Dice just using new dice. 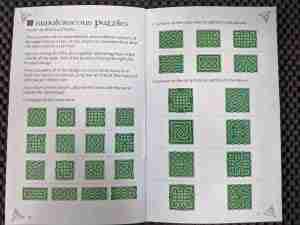 Simultaneous Puzzles – These can be played by multiple players simultaneously as a race to complete set patterns. Everyone gets their own set of dice from the four dice types and tries to complete a series of patterns shown in the book before the other players finish a different set.

The gamebook includes ten different games. Eight of these are updated rules for games included in the original Knot Dice and two are completely new.

The overlapping games are all games where you draft dice, roll them, and add them to a pattern. The change when using Knot Dice Squared is that you separate the dice into four piles by dice type. When drafting players get to pick which pile to draft a die from. Other than that these are basically the same games.

The two new games are: 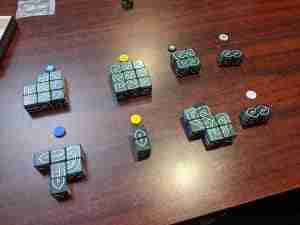 4 Get Me Knots – This is a solo game where you are trying to build eight different patterns of dice simultaneously. You start with four dice drafted from the different die types. You roll them and each turn you have to add at least one of your dice to one of the eight patterns. You can place more than one die if you are able. You then draft back up to four dice and continue. The goal is to make eight complete patterns before you run out of dice. 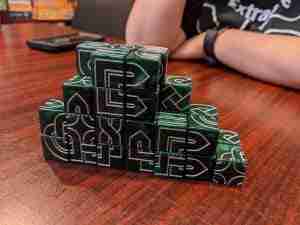 Hedgerows – This is a two-player 3D pattern building game. One player takes the eighteen original Knot Dice and the other player takes the eighteen non-bridge dice from Knot Dice Squared. Players are working to build one large hedge. Players grab three of their dice and roll. Two dice must be placed every turn. After the first die is placed all subsequence dice must be placed either touching an opponent’s die or in a space next to where an opponent’s die is, representing the slowly growing hedge. After all of the dice are placed, players get one point per die in a complete pattern on their side of the hedge.

Knot Dice Squared is a great addition to Knot Dice. 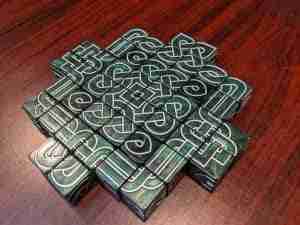 As I noted in my Knot Dice review I think that this game, and now its expansion, is worth the point of entry just as a cool set of dice. They make a great conversation piece, to set out on a coffee table or as a desktop toy. In that regard, you don’t actually need a set of Knot Dice in order to use Knot Dice Squared. These dice work perfectly well with on their own to fiddle with and make all kinds of cool patterns.

It’s only when you get to the games and puzzles included with Knot Dice Squared that you actually need a set of Knot Dice. Even then there are some games and puzzles you can play with just the dice in this box, but overall I think you are going to want the original set as well.

Most of the games and puzzles in this new set are just updated versions of the originals from Knot Dice with very minor changes. The puzzles are the same types, just using more dice varieties. The games again are much the same, they just have you split the dice by type and pick from a type when drafting. 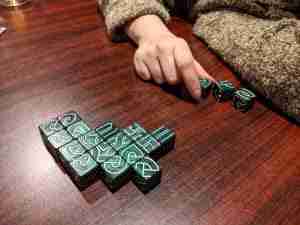 What we did find is that once you add in the new dice everything become significantly harder. The dice don’t really fit together the way you expect them to and it takes a while to get used to what types of patterns work with each other and when bridge dice are needed. The puzzles in particular really ramp up in difficulty when combining all four dice types.

I really like that the new puzzle type allows for up to four players, though I do think that the player who has played around with these dice the most is going to have a big advantage when it comes to any race to build patterns. Still, it’s cool to see a multiplayer puzzle option. 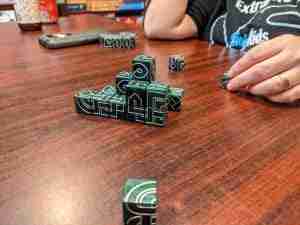 The new games are both interesting. I particularly like the way they tied in the hedge theme to hedgerows with players only being able to build next to where their opponent has caused the hedge to grow. I also really like the fact that more of the original games can now be played with more people.

Overall I’m still amazed by how brilliant these dice are. The thought process and math involved in getting all of these dice to work together boggles my mind a bit. I’m really impressed by the work that Matthew O’Malley put into making these dice. The dice look amazing and the puzzles and games are engaging and fun. This expansion does exactly what I want from an expansion, it adds to and improves on the existing game without changing it into something else. 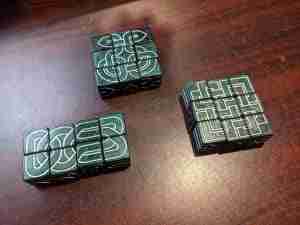 If you own a set of Knot Dice and enjoy playing with them then definitely consider picking up the Knot Dice Squared Expansion set. It’s just more of what you already like, more dice, more games and puzzles. You could also pick this up as a stand-alone set, something that makes for a cool display piece or fidget toy, but in general, this set is meant to expand upon Knot Dice and you can only play most of the games and puzzles if you also have the original set. Due to this, if you are curious about Knot Dice I recommend starting with the base set and then if you find you are having fun with that consider picking up this expansion.

I love when a board game expansion adds to and improves on the original game without changing the overall feel of the game. It improves on something you love by just giving you more. Knot Dice Squared is a great example of this type of expansion. What expansions do you think do this well, just take an existing game and make it even better without substantially changing it? Let us know in the comments!