You are here: Home / Reviews / Board Game Preview – Macaron a unique trick taking game that includes a voting system for determining trump

Macaron is a modern card game that has clear roots in traditional trick-taking card games. This game, which is coming to Kickstarter in late November, features some really interesting new trick-taking mechanics.

The biggest thing Macaron adds to the traditional trick-taking mechanic is a vote to determine trump. It also features a punitive suit that players will not want cards of in the tricks they take. Both of these combine for a new, unique, trick-taking experience.

Disclosure: Sunrise Tornado provided me with this preview copy of Macaron. No other compensation was provided.

What we got in our preview copy of the modern trick-taking card game Macaron. 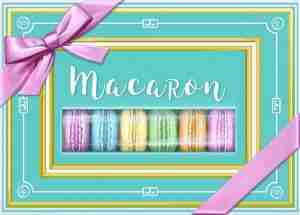 Macaron was designed by Ta-Te Wu and features art by Holly Chiu and Rachel Kim. It’s going to be published by Sunrise Tornado Game Studio and will be hitting Kickstarter later this year. This card game plays one to five players which each game taking about half an hour.  The somewhat pasted on theme here is that players are patissiers in France making macaron gift boxes for King Louis’ birthday.

Due to the fact that the version I have of Macaron is a pre-production copy and does not feature the final artwork or components we did not record an unboxing video.

The components we did receive include four group boards each showing one of two macaron types. A central playing board that includes a score track, a bidding track and a place to track the number of macaron gift boxes completed by each player each round.

The fifty-two cards in Macaron are split over seven suits, six of these suits have cards numbered one to seven, the final suit, chocolate has cards from one to ten.

There are fourteen voting tokens which include one start player token, a marker to mark which suit(s) are royal (trump) and which flavour is the allergen. Player components (for which my copy only included enough for four players) include a betting token, a score token and a completed box token.

How is Macaron a modern trick-taking game played?

Starting the game: Before starting a game of Macaron you first need to adjust things based on the number of players. With one to three players you only use five of the seven suits and only the group boards for all of those suits. With four or five players you use all of them. 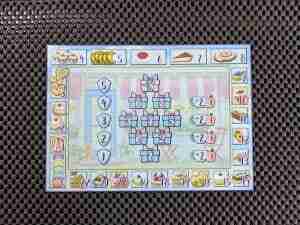 Players then pick which side of the main board to use, easy or advanced. The advanced side of the board is used for a longer game and for adding more granularity to the bidding phase.

Starting a round: The deck is shuffled and the cards are dealt evenly to all players. It’s worth noting that unless you are playing with five players all cards are in play, something important for card game players who like counting cards.

If playing with four or more players, the voting tokens are divided evenly among the players. Players then look at their cards and pass two cards to one of their opponents, starting with the player on their left and swapping to the player on their right every other round. 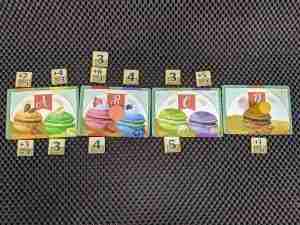 Voting is done with the voting chips which are played one at a time in player order. These chips are placed either above or below a specific Macaron flavour, with votes above a flavour counting as positive and those below being negative. After everyone has voted the chips are flipped and you do the math. The group that has the highest total becomes the Royal Group and the individual flavour with the lowest total becomes the Allergen. 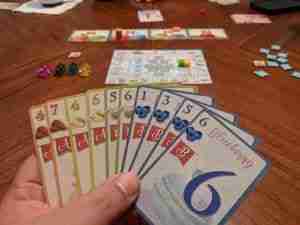 Playing a round of Macaron:  Starting with the start player and continuing clockwise players will each play one card. Standard trick-taking rules come into play here. The first card led determines the suit for that hand. Every card played after has to follow that suit and the highest played card takes the trick. If a player can’t follow suit they can throw offsuit. Non-royal offsuit cards can never win a trick. Cards from a Royal group will steal a trick with the highest Royal card winning the trick.

In addition to this, one suit is the Allergen and any trick taken with an allergen in it is going to be worth no points — that box of macarons is spoiled by the allergen.

Finally, ones and twos are special. A two if included in any trick negates any allergen present (even if that two comes from the allergen suit). A one, if it’s the card to take the trick, is worth three completed boxes instead of one. 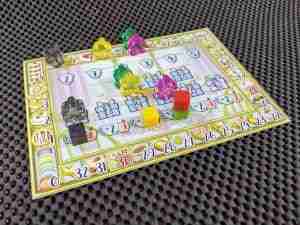 After all of the players have played all of their cards, they count up their number of completed boxes and mark that total on the scoreboard. Players then get points based on the number of boxes completed, these are combined with the points for making a bet at the start of the round. Note it’s not just one point per completed box, for example on the easy side of the board completing three, four, or five boxes is all worth three points, whereas on the advanced side you need to complete four or five boxes for three points.

Game End: A standard game of Macaron ends when one player hits ten points with the player with the most points at that time winning the game. The game also presents the option to play to twenty or thirty points using the advanced side of the scoring board.

In addition to these rules, there is a full set of solo rules that use a bot player called Emma.

In general, I like trick-taking card games. I’ve been playing them for as long as I can remember and I’m always somewhat excited to see something new done with this tried and true card game mechanic. I’ve been very impressed by some modern trick-taking games, like The Fox in the Forest and the Duet version.  This is what got me to agree to check out this new trick-taking game when Sunrise Tornado reached for reviewers on Facebook. I wanted to see what they did that was different.

The two things that really set Macaron apart from other trick-taking games is the voting system for the Royal group and the addition of the Allergen, a punitive suit that is included every round. 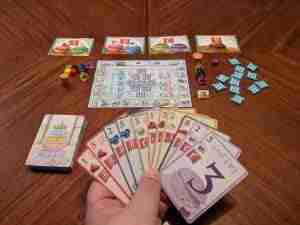 I really enjoyed the whole voting system to determine the Royal and the Allergen each round. There are some really hard to make decisions to be made during this part of the game. Players place their bets after seeing their cards and after passing cards to their opponent. So you have quite a bit of information going in. Added to that is the fact that you can see where people are placing their votes but not the values of them, and that’s going to have an impact on where you are going to play.

As an extra level, there’s also the fact that the trump in this game isn’t usually going to be just one suit. It’s a Royal Group you are voting for and three of the five groups have two different flavours in them. Finally, there’s the fact that the Allergen flavour can actually be part of a Royal group. 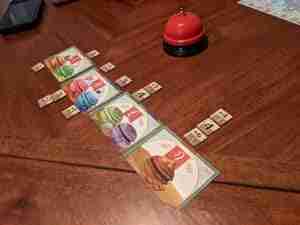 The biggest problem in Macaron is that this great voting system only exists if you play the game with four or five players. While the game is written to play with less, even including solo rules, I found that you really want a group of at least four to experience what I thought was the highlight of the system, the voting round. You are really losing out on the biggest part of what makes this game unique by playing with fewer players.

The other potential issue I see with this game is that it’s rather fiddly, especially when compared to a traditional trick-taking game. There’s a lot of bits in this game and those are combined with quite a few moving parts. This isn’t a game where you just need a deck of cards and somewhere to keep track of everyone’s core. You need to track score, how many good boxes players create if they bet or not, which suits are Royal and which is the allergen, and then there’s the whole voting with tokens thing. All of this means that macaron may not be the best gateway trick-taking game or even a good next step for traditional card game players. It’s significantly more complicated than you would expect for a “simple card game” 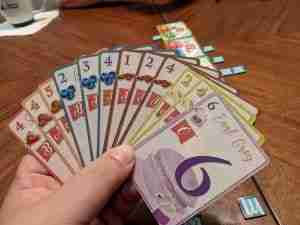 Despite the fact that I have a preview copy of the game I was pretty pleased with the design work in Macaron. The highlight is the card design. Besides featuring some rather appealing art there’s a lot of helpful information on the cards including things to make the game colour blind accessible. The numbers are clear, each suit’s artwork and overall colour is unique, there are small unique symbols for each suit and then there is the addition of a letter for each card group which is especially useful for quickly figuring out which cards in your hand are Royal.  Okay maybe the chocolate and the almond suits could have been differentiated a bit more, especially when trying to see them across the table, but in total, I was very impressed.

Overall I really enjoyed Macaron, it was much more fun than I expected and I would go so far as to say significantly better than many other modern trick-taking games I’ve played in the last few years. There is a lot going on here, and I think that’s what I like about Macaron. However, that added level of complexity might be a problem for people new to trick-taking games or playing their first modern trick-taking game after coming from the classics. I really like the voting system and everything that goes along with it. Voting adds a new level of strategy and tactics to traditional trick-taking that I found I really enjoyed. It’s a shame that the voting rules only come into play when you play this game with four or five players. 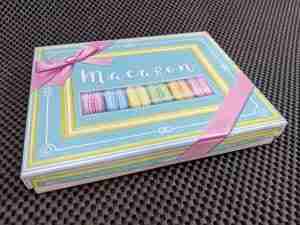 If, like me, you are a long time fan of trick-taking games, you really should check Macaron out when it goes live on Kickstarter. If you like card games in general and don’t mind trick-taking games I also recommend giving Macaron a spin, as I think there’s a lot here to like. If you aren’t familiar with trick-taking games or don’t have much experience with them I would caution you to stay away from this one, at least for now. Go find some other simpler modern trick-taking games to try and if you enjoy them come back and take a look at Macaron.

I love seeing older mechanics like standard trick-taking being brought back to life in new and interesting ways. What’s your favourite modern board game that uses trick-taking as it’s base? I would love to hear about it in the comments. 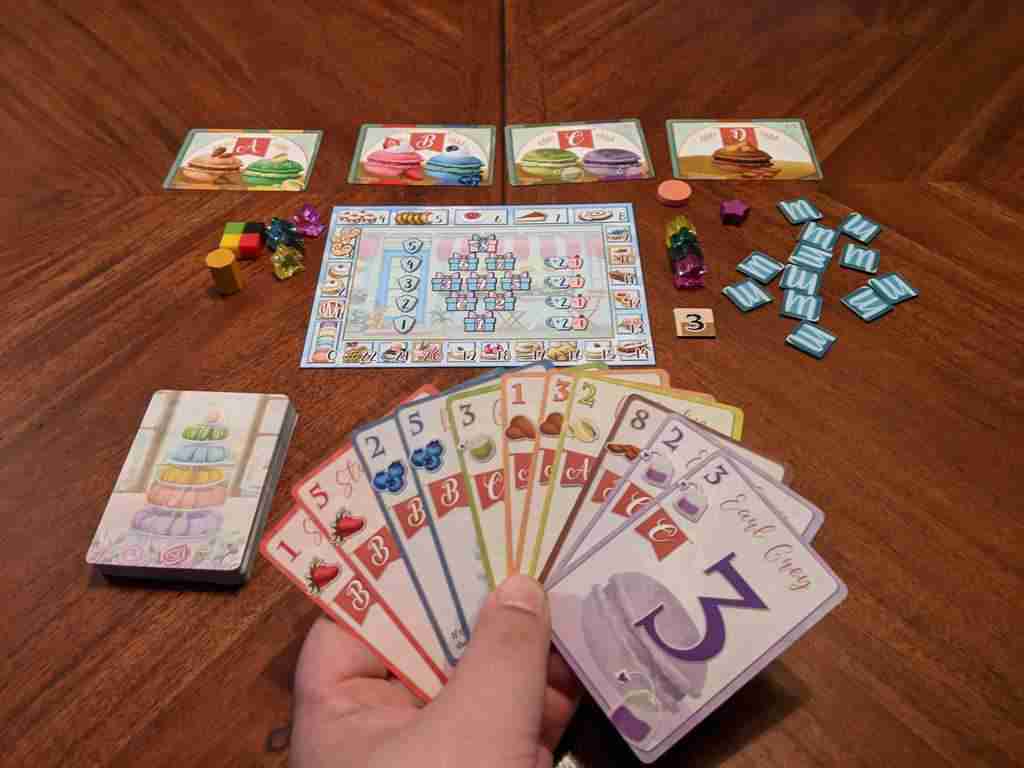 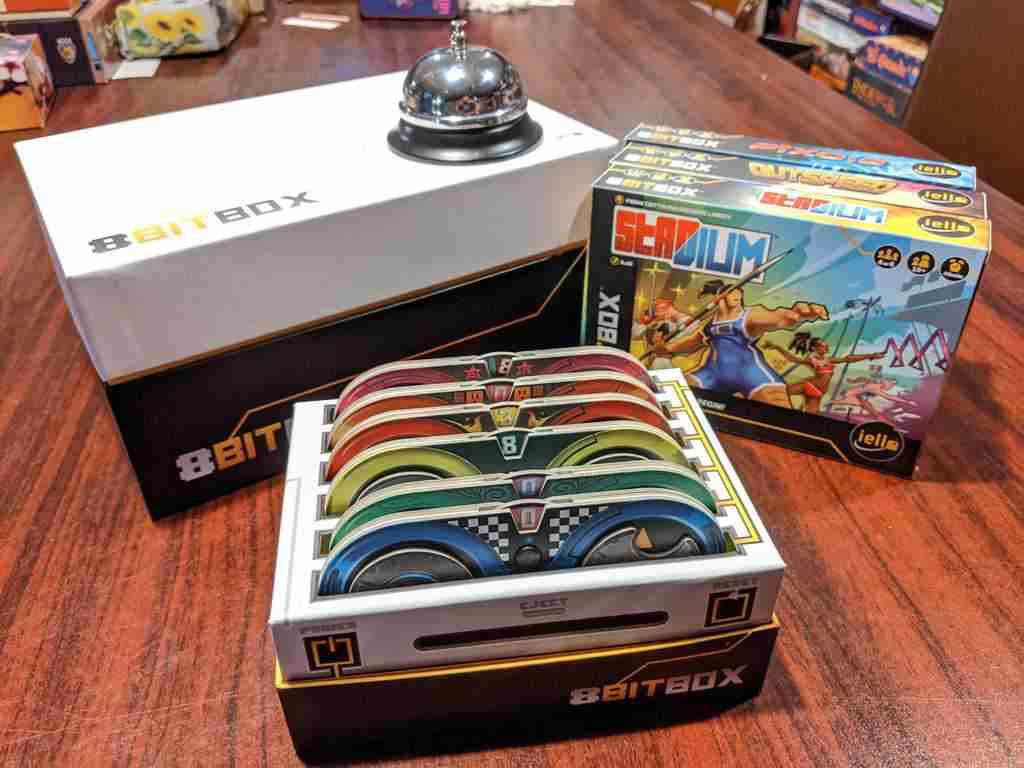 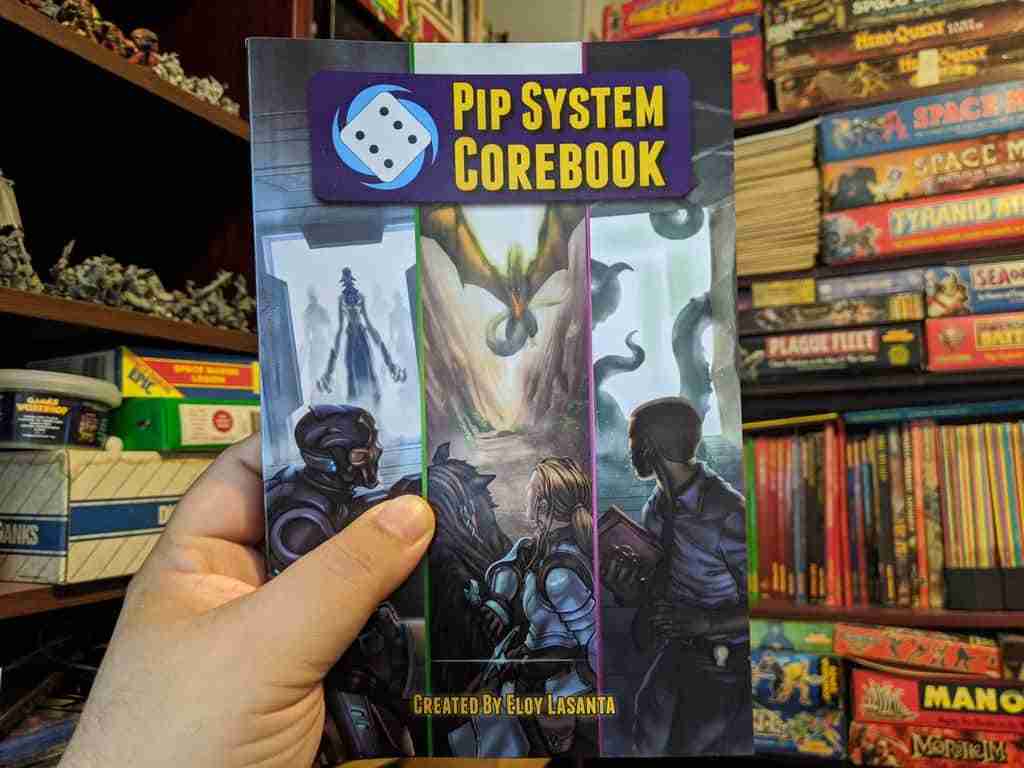 RPG Review of the Pip System Corebook, A D6 based generic roleplaying system that’s great for new players or kids

I attended my first online game convention – A look at Renegade Con: Virtual