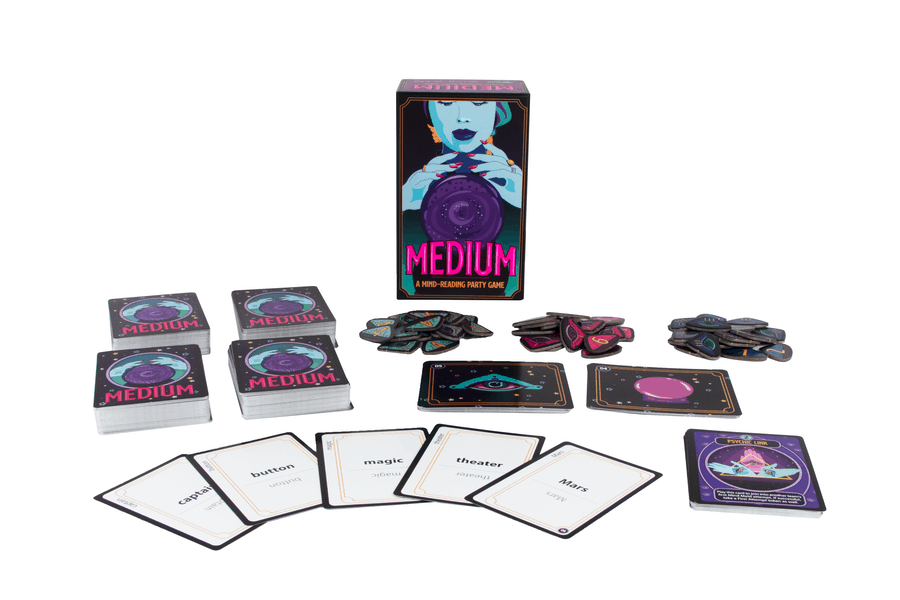 Last year after Gen Con hit, pretty much every podcast I listened to was going on about Medium, a fantastic new party game from Greater Than Games.

In Medium you pair up with your partner and try to form a psychic bond and both come up with the word that connects the words on your two cards.

Disclosure: Some links in this post are affiliate links. Using these links doesn’t cost you anything extra and it helps support this blog and podcast. As an Amazon Affiliate, I earn from qualifying purchases. Greater Than Games provided me with a review copy of Medium as well as three additional copies to give away to you, our fans. No other compensation has been provided.

Medium comes in a surprisingly large box for a card game. What’s in there? 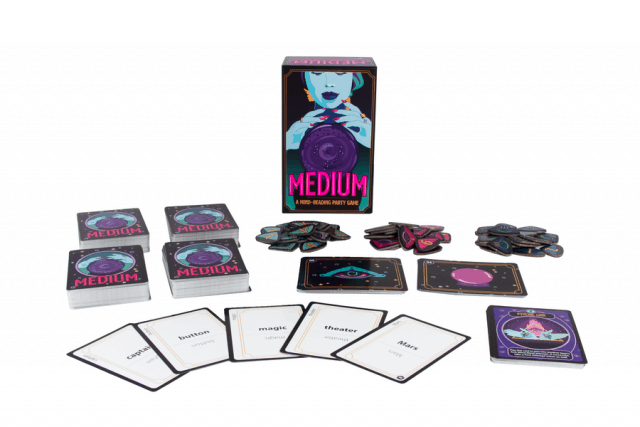 Medium was designed by Danielle Deley, Lindsey Sherwood, and Nathan Thornton. It features art from Sarah Kelly and was published in 2019 by Storm Chaser Games and Greater Than Games. It plays two to eight players, either separately or in teams. A game lasts about half an hour depending on the number of players.

When I first saw Medium in person I was surprised at how large the box was. I was expecting a small pack of cards or a smaller box like other cards games like The Mind or The Game. Instead Medium comes in a taller larger box, more like the type you see to hold sports cards.

While unboxing the game I realized why they packaged it like this. You can see that for yourself in our Medium unboxing video on Youtube. I’ll get back to why after I tell you about what you get in the box.

The rule book is a full colour, 10-page, book with glossy pages. The main rules are only six pages long and contain plenty of examples and pictures of the cards and components. The remainder of the book contains some alternate rules and variants.

Under the rules are a series of punch boards all of which contain scoring tiles for the game. These are also rather glossy. It’s like they are coated with a plastic film. These are well cut and punched well, though I did have one chit that took some of the backing film with it.

Under this is a small pack of cards in a resealable package. These are the bonus, ESP special power cards. Under those is another resealable package containing a bunch of dividers. Under these you find one plastic baggie to hold the score tokens. I’m always impressed and pleased when companies include baggies with their games.

Finally, we have four rather large packs of cards. These contain the word cards for the game and are split into fifteen sets.

All of the cards stick to that whole glossy thing that’s going on with the rest of the components. The problem with this on the cards is that it makes them rather slippery. This is great when shuffling but does mean you have to be careful when stacking the deck. Other than the gloss, the cards are decent. They aren’t the thickest I’ve seen and they are really sparse. There is no real artwork to speak of other than an art deco style light line drawing in the background. To me, it seems they could have made the font bigger or featured some form of artwork on the cards. They definitely went with function over form with the card design.

At the bottom of all this is a box insert. One that isn’t completely obvious how it works at first. There’s a flap in the insert that start off flattened down that is easy to overlook. But if you raise this flap up it becomes the perfect divider that goes between the cards and the scoring chips.

Once you’ve opened and sorted all the cards, put all the dividers in and punched the chips, everything fits back into the box perfectly nice and snug. The design is really solid and there’s no chance of cards moving around or shifting.

While I didn’t try it, I can tell that this box design would also handle sleeved cards.

How do you make a mental connection in Medium? 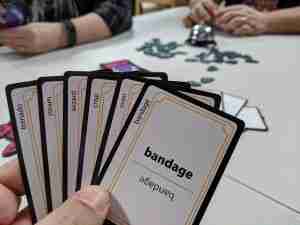 To set up a game of Medium you pick out a number of sets of cards equal to the number of players minus one. You shuffle these together and then insert three breaking crystal ball cards into the bottom third of the deck. Each player gets a starting hand of six cards.

The cards each say a single word on them. Things like: Pizza, Halloween, Pirate, Morgue, Astronaut, Spot, Potato, Hotel, etc.

Then players each pick a word (or words) that both of the cards played have in common. They are trying to find the Medium between the two words. They count down three… two… one…. and both say their word. If they both said the same thing they have made a connection and take one of the scoring tokens with an I on the back.

If the players fail to make a connection they get a second try, the thing is that this time they are using the two words they just said, not the words on their cards. They also can’t use the words already played when trying to make this second connection. If players succeed on the second try they take a number II scoring chit. If they fail on this second round they get one more chance, again using the two words they just said on the last guess. If they match on this final try they take a number III scoring chit.

Whether there was a match made or not players draw replacement cards and play moves on to the next player clockwise. The game continues until three cracked crystal ball cards are revealed. At this point players flip over their scoring tokens, add up the points and the pair with the most points wins.

In addition to these rules, the game also includes rules for team based play and Extra Special Power (ESP) cards. When using these at the start of the game each player gets two power cards. One lets them join in on a guessing session and if they say the same word as either player they get a level I scoring token. The other ESP card lets players refresh their hand.

So far we have had a great time playing Medium. 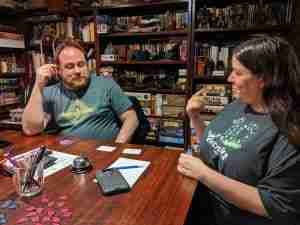 The first time I played Medium it was with the Tabletop Bellhop team. It was just Sean, Deanna and I checking it out and trying to learn how to play before breaking the game out at a public play event. What I think is important to know about this is that none of us are really party game fans. While I had heard many good things about this game, I had trepidations about playing it with groups like this, gamers and people who aren’t social gaming fans.

I’m very pleased to say that my trepidations were unfounded. By turn two of our game of Medium all three of us were laughing. Not just laughing, but laughing in that full body shaking, can’t catch your breath, trying not to fall out of your chair type of laughing. It was then that I knew that this game would be a hit.

Hearing the rules it sounded like it should work, but it wasn’t until presented with the word Halloween played in front of me while I’m holding a hand of cards that contain words like Canoe, Astronaut, Banana, Spot, Button, and Shake. Sitting there trying to find anything that I could make a connection with was hard. Trying to find something that I thought Deanna would also make the same connection with was even harder.

Since that first game, I’ve now played Medium with other groups of gamers at other player counts. I will say it definitely seems to play better with more than three players, but once you get past four there can be some downtime as only two players play at once. If you are playing Medium in a social situation this is probably fine as everyone else can socialize, but if you break it out at a game night with everyone focused on playing, some players may get frustrated by this downtime. 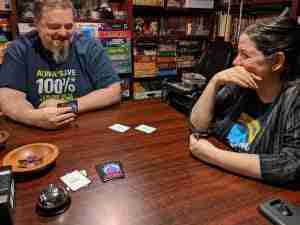 So far every group I have tried Medium with has enjoyed it. The rules are really easy to teach and usually, after about three pairs take their turn, players start narrowing in on how to come up with words that are easier to make connections with.

Unlike many party games, the scoring system here works pretty well. Despite that, you may want to just toss scoring out altogether and play Medium as an experience instead of a game.

Overall I’m still having a lot of fun showing this game off despite being pretty bad at making connections myself. I think this is a good sign as I’m enjoying the game despite not being very good at it. If you are into party games at all I strongly suggest checking out Medium. If you dig word games you will also probably dig this game a lot. Even if you are like me and not a big party gamer I suggest checking out Medium and then after playing you may find you want to own a copy as well.

Have you played Medium? What did you think of this unique party game? Haven’t played it, let us know what your favourite party game is then!