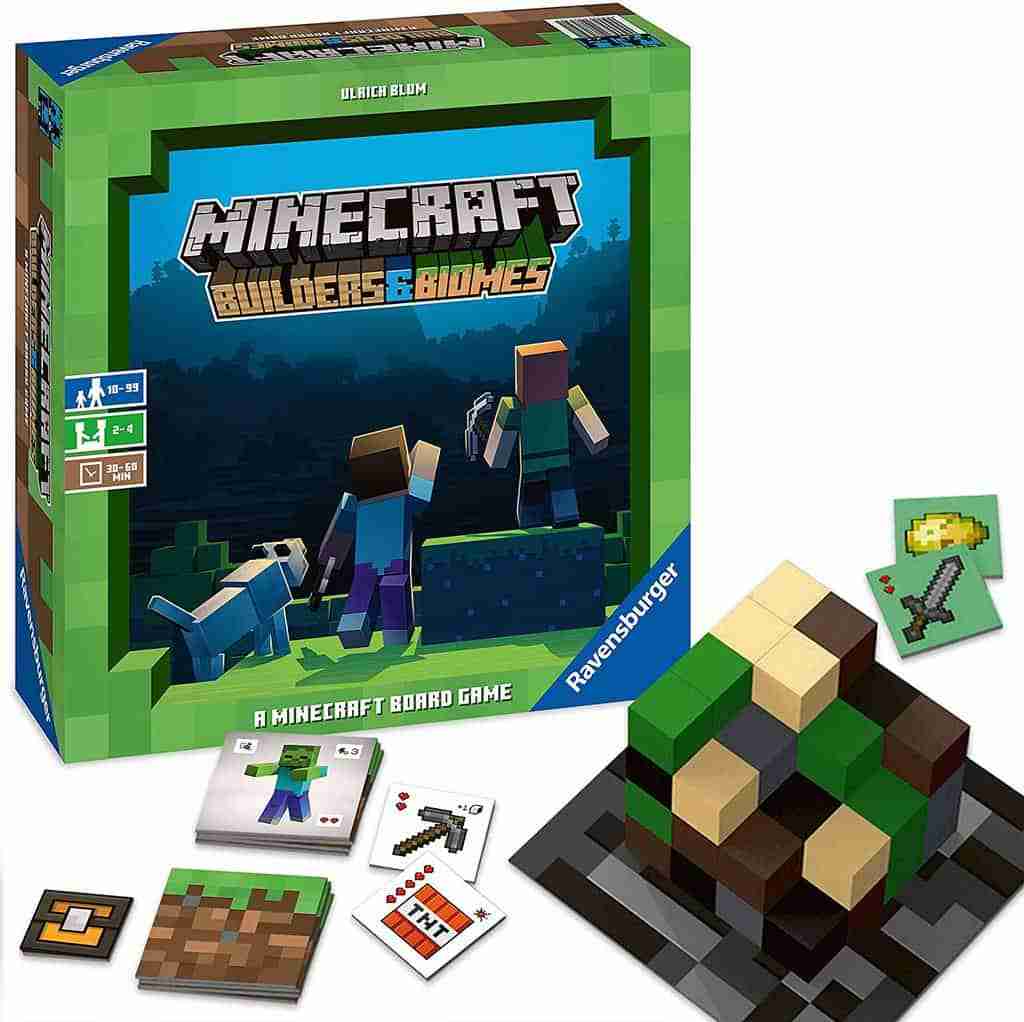 Licenced board games are always a mixed bag, so I’m always pleased when I find a licenced game that’s actually good. Minecraft Builders and Biomes is one of those hard to find, decent games, based on an existing property.

Builders & Biomes actually has some mechanical ties to Minecraft the digital game and so far, is the best Minecraft tabletop game on the market.

Disclosure: Some links in this post are affiliate links. Using these links doesn’t cost you anything extra and it helps support this blog and our podcast. As an Amazon affiliate, I earn from qualifying purchases. Ravensburger provided a review copy of this game. No other compensation was provided.

What you get in the box for Minecraft Builders & Biomes from Ravensburger.

The first thing you notice when opening up Minecraft Builders & Biomes

is a big bag filled with large wooden cubes. These cubes are in four different colours: light brown, brown, grey, black and green.  Each represents some resource from the digital version of Minecraft. These are chunky big cubes like you will find in games like Imhotep Builder of Egypt and not the usual smaller resource cubes you find in most board games.

Along with the bag of blocks, you will find a rulebook. It’s in a wide variety of languages and makes it look like the game is harder to learn than it is. The English rules are only a handful of pages. The rules are a bit hard to follow. It took me two read throughs to fully grasp what you were supposed to be doing in this game. I have a feeling the English rules are a translation. There are lots of examples and that helped us figure out what we were doing.

The box has four player boards that are ridiculously thin. These are Terraforming Mars thickness, which means not thick at all. Each board features a scoring track surrounding a three by three grid of terrain types. Each board is unique but actually has the same number of each terrain type on it.

Then there are the punchboards. These are also disappointingly thin, though nowhere near as thin as the player boards. Having played the game I think the reason for the thinness is that many of the tiles in this game are meant to be shuffled and making them thinner definitely helps with that. I still can’t help but think that these could be thicker, especially at a $40 MSRP.

The final thing in the box is some coloured standee stands, one for each player. Player pawns are on the punch board and represent different player costumes from the digital game.  The rest of the punchboards are sixty-four terrain tiles, a bunch of treasure chest tiles, some very useful rule and scoring summary tiles, some walls for building the mining cube, and a set of five weapon tiles for each player.

While I have to admit that I really wish the punchboards were thicker, they work, for the most part. My one nitpick would be that the XP counter you use to track your score doesn’t even fit onto the scoring track. The thin player boards feel like I’m going to crease or fold them every time I take them out of the box. If you own this game and expect to play it a lot I would recommend laminating these boards.

Take a look at what you get for yourself in our Minecraft Builders & Biomes unboxing video.

How do you play Minecraft Builders & Biomes

You start each game of Minecraft Builders & Biomes

by building the mine. This is done by creating this box structure out of walls from the punch boards, then pouring in all the cubes. With a little bit of shaking and shifting everything should fall into place making you a nice four by four by four block of cubes. This actually works surprisingly well and isn’t hard to do at all. 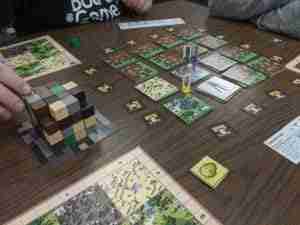 Next, you lay out the sixty-four tiles into a four by four grid with stacks of four tiles each, all face down. Treasure chests are placed at the end of each row and column. Player pawns are placed in the middle of the board. Each player takes their five weapon tiles and shuffles them. Then you are good to go.

Each turn players take two actions, each of which has to be different. The actions include moving between the stacks of tiles (which reveals all the tiles adjacent to where you moved), mining bricks from the block of cubes, trading in cubes that you have already minded to build a tile that you are next to, fighting a mob that has already been revealed or collecting a weapon if you are next to a chest.

Each tile in the game represents a building or a mob. Buildings each have three features. A biome they belong to, a building material they are made of, and a building type. Mobs have a health level, an amount of XP (points) they give for defeating them, and a potential scoring bonus. To build a building you just trade in the right blocks and place that tile on your personal playing board. To collect a mob you have to fight.

Fighting is rather unique. Each player starts with five weapon tiles. Three of these are poisoned potatoes that do nothing. The other two are basic wooden weapons that do almost no damage. To fight a mob a player shuffles their tiles and draws our three. They then look at the damage they did and compare it to the health of the mob. If they meet or beat the mob’s health they take the tile. The edges of the board are filled with treasure chests that contain more weapons. Each weapon type is unique and all of them are better than the stuff you start with in your base deck. Some of these are tied to the theme of the game. For example, the Pick Axe lets you mine a cube from the cube block every time you draw it. 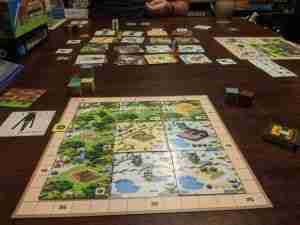 Despite seeming a bit complicated based on the rulebook the actual gameplay is pretty straightforward and quick.

My Overall Thoughts on this new Minecraft Board Game, Builders & Biomes

. Board games based on video game licences have not had a very good track record. I’m pleased to say that this Minecraft game doesn’t fall into that trap. There’s a really solid game here and a game that actually ties back into its licence pretty well.

No this isn’t really a board game simulation of playing the video game Minecraft. It doesn’t really feel all that much like playing the video game at all, but you are doing some of the things you do in the video game in this board game. You have to spend time mining various resources in order to build various structures. You also have to be cognizant of where you are building what. That’s actually a key part of this game. You need to watch what you build where and when. Then you also have to deal with various monsters and to do that you need to upgrade your equipment. These are all things that are a part of playing Minecraft. 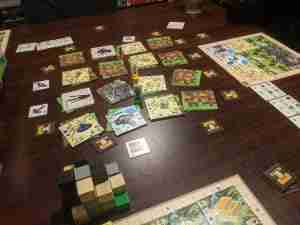 One of the things I was impressed by is how well Builders and Biomes plays as a game, regardless of theme. It features relatively simple mechanics, but a really thoughtful scoring system. Minecraft Builders & Biomes is all about planning ahead. It’s also about watching what your opponents are doing and trying to predict what they are planning to build so that you can potentially mess with their plans.

What I’m not sure about with this game is how well it will do on the market. I worry that it’s a bit heavier and more complex looking than most mass market games and thus may not appeal to Minecraft video game players. I also worry that the licence is going to scare away hobby board gamers despite there being a solid game here. I worry that it’s going to miss the mark for most markets.

Personally I’ve rather enjoyed this game. I’m not a big Minecraft fan but I have played it and I like how this game ties in some aspects of the video game. I also like the amount of strategy and forward thinking required to score well. Minecraft Builders & Biomes is a solid thinky filler. I just wish the component quality were a bit stronger especially in regards to the thickness of the player boards and the quality of the punchboards that make up the bulk of the components.

If you are at all into Minecraft I strongly recommend picking this game up. Right now it’s the best Minecraft tabletop game on the market by far. If you aren’t a Minecraft fan you still might want to check this out. If you want a short thinky filler that’s all about planning ahead and messing with your opponents plans this may be the perfect game for you.

Have you played Minecraft Builders & Biomes

? What did you think of this licenced board game?