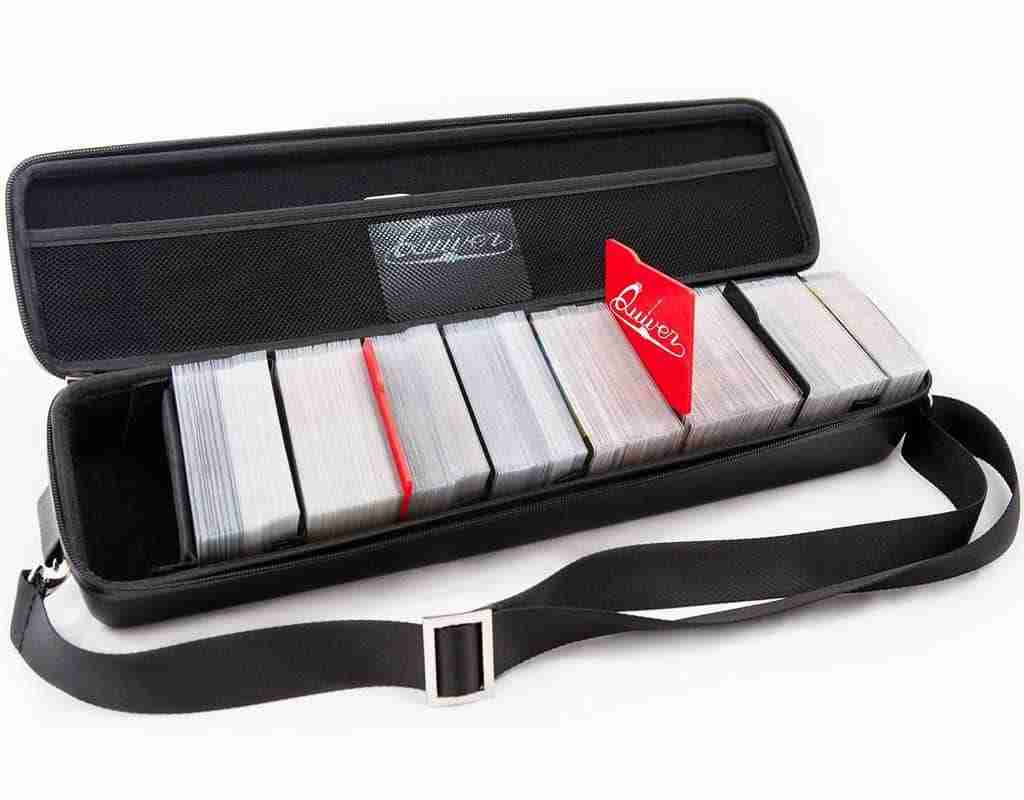 We have been teasing our latest giveaway for a while, on the blog, the podcast and even in our newsletter. The wait is over, here is my review and giveaway of a Quiver from Quiver Time.

I’ve been eyeing this deluxe card carrying case for some time. I’ve always been curious about them and after finding a good deal one day on Amazon for Tabletop Gaming Deals I almost ordered one. Then I had the brilliant thought to instead contact Quiver Time and see if they wanted to work together. After some back and forth I got them to agree not only to send me a Quiver to review, but also to let me give one away to one of you!


Disclosure: Some links in this post are Amazon affiliate links. Using them costs you nothing but I earn a small commission from qualifying purchases. In addition, Quiver Time provided me with a Quiver to review as well as one to giveaway.

Images below are thumbnails, click to view the full sized images.

I think the best way to show off The Quiver from Quiver Time is to actually show it to you. To this end, I did a live unboxing video last weekend. In this video, I start with the Amazon shipping box and share my thoughts as I unpack and open my shiny new card carrying case. 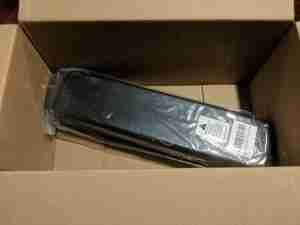 My Quiver came in a rather large Amazon box that had the case sitting diagonally in the bottom of the box. The case itself was just in a large ziplock style bag with a choking hazard warning label and barcode on it. No box.

Each Quiver is 17.5 inches x 4.5 inches x 3.5 inches. They come in a variety of colours. I personally got a black one as that was what was in stock in Canada at the time. In addition to the case you get a shoulder strap, a wrist strap, four plastic dividers, five Velcro dividers, two corner pads and as a bonus 100 Quiver branded card Sleeves. There is also a small information packet that includes instructions on how to register for a 3-year warranty and how to contact Quiver Time and where to find them on social media.

All of the metal parts ship very well protected. There’s a plastic film over the top Quiver logo. The metal zipper pulls are covered by foam, etc. I like to see that Quiver Time takes this extra effort to make sure your Quiver shows up in good shape. 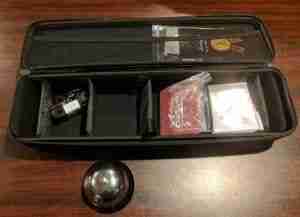 Opening up my Quiver I found the five Velcro dividers already evenly spaced on the card holding side. The lid actually has storage space as well. This has some elastic netting and looks like it would be perfect for keeping instruction booklets. It is very thin though so I don’t think you are putting much else up there. During the live unboxing, someone in the chat asked if you could store dice up there and I do not think that would be a good idea. There’s too good a chance you will damage some of the cards.

I have to admit I’m impressed. This is one solidly built impressive piece of gamer luggage.

The first thing I noted when opening up my new Quiver was how sturdy it was. This is a very solid case that is not going to get damaged easily. The included plastic dividers are thick, ridiculously thick, plastic. There is no way these are getting bent and I don’t even think you could snap one in half if you tried. 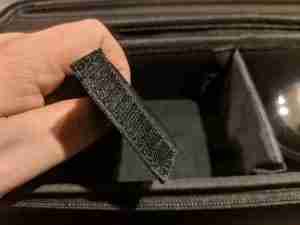 The Velcro dividers themselves also fairly thick, not as thick as the plastic ones but I don’t think they are going to buckle easily. You would have to try to damage them. The straps seem solid though I can’t see actually carrying around a full Quiver by the wrist strap. What really impressed me is the quality and thickness of the carabiner clips used to attach the straps to the quiver. I wouldn’t have been surprised by plastic and instead was impressed by rather thick metal.

I love the fact the Velcro dividers are so easy to remove and move around. I adjusted quite a few of them in the video. The one trick I did learn was that you shouldn’t try to move the dividers with cards in your Quiver. Due to the way the dividers wrap around to the sides, in order for the Velco to stick, it’s not easy to move them with cards in the way. My only real complaint here is that I probably could have used more Velcro dividers, but that would really depend on what games/cards you plan on storing in your Quiver. Plus you do get four plastic dividers as well, so there’s a grand total of nine dividers between the two types. 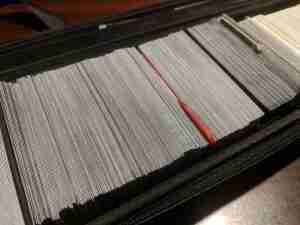 The dividers aren’t quite tall enough to stick out past the card sleeves and you don’t see enough of them to read any sort of label. Now, this isn’t a problem with unsleeved cards, just sleeved ones. I’m also not sure what the best way to label these plastic dividers is, but that’s a me problem and not a Quiver Problem. You would need a very thin label maker. 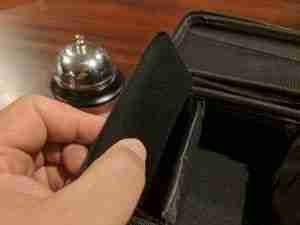 Now I didn’t test this theory but the Quiver should hold 1350 unsleeved cards if you remove all of the dividers and the corner protectors. A note on those. Due to the fact that the very ends of the case are rounded, the people at Quiver Time give you these padded end caps that fill those gaps to make sure that any cards in the very ends don’t get bent. It’s attention to detail like this that has me impressed.

During the video, I managed to fit in my entire collection of sleeved Star Realms

cards into the Quiver. That includes three core sets and the Gambit Expansion Pack

and some promo cards. I then put in all my Agricola Occupation and Minor Improvement cards, unsleeved. Then Start Player

and Tie Breaker from Bezier Games. I had one small pocket left at this point and in there I tossed the two meeple for Start Player and Tie Breaker. 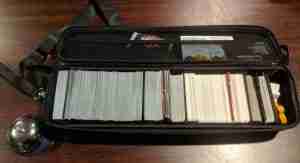 At one point, I took my filled quiver and shook the thing up pretty good. Way more than would normally happen during a trip to the local game store or even in a luggage compartment. I opened up the Quiver after and everything had pretty much stayed in place. A couple cards shifted upwards a bit but nothing was damaged or at risk of being damaged. Note this was with some space still left in the case. It’s good to know the Velcro is strong enough to keep things in place.

Lastly, I have to note that the Quiver is rather striking looking. From the silver Quiver logo on the front to the shiny zipper pulls also featuring the logo, the Quiver looks and feels like a high end product. In the video, I noted that it may be leather. I tried to confirm on their website but I don’t think it’s real leather. It’s still really nice faux leather, and it is water resistant, which is great for when you need to transport your card games to the FLGS in the rain.

If you watched the unboxing video you saw my confusion over finding a rather pointy black plastic card divider that came with my Quiver.

I took some pictures of this and sent them over to Quiver Time who very quickly got back to me to let me know that it was indeed a Quality Control error. Unfortunately, I had received a miss cut plastic divider with my Quiver.

They were understandably embarrassed but did note that in all the years they have been selling Quivers that this is only the third time that a problem like this has been reported. It is in no way common.

I am always very happy to see a company that is willing to own a mistake and do what it takes to fix the problem. I provided them with some more information and pictures and hopefully, they can use that to help root cause the problem and prevent it from happening again.

In addition, I received some follow up information today. Quiver Time has confirmed with Amazon that this is the end of this batch of Quivers and that the QC issue has been fixed with the next batch. Also that the card sleeves have been upgraded to better Apollo sleeves and any new Quivers going out should have these new upgraded sleeves. 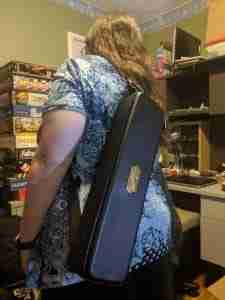 The Quiver is a high end piece of gaming gear. It’s not cheap and it’s not for everyone.

Having now had the chance to check out not one, but two Quivers I have to say that I think it’s worth it. Especially so if you are really into card games and the tournament scene. If you are constantly bringing your cards with you to various tournaments and game stores there’s no flashier way to carry your collection.

Not only does the Quiver look good, it’s going to keep your cards sorted, in good shape and ready to play when you get to game night.

Want to see another cool piece of card game carrying gear that will fit inside a Quiver? Check out our Quiver Time CITADEL Deck Block Unboxing Video.