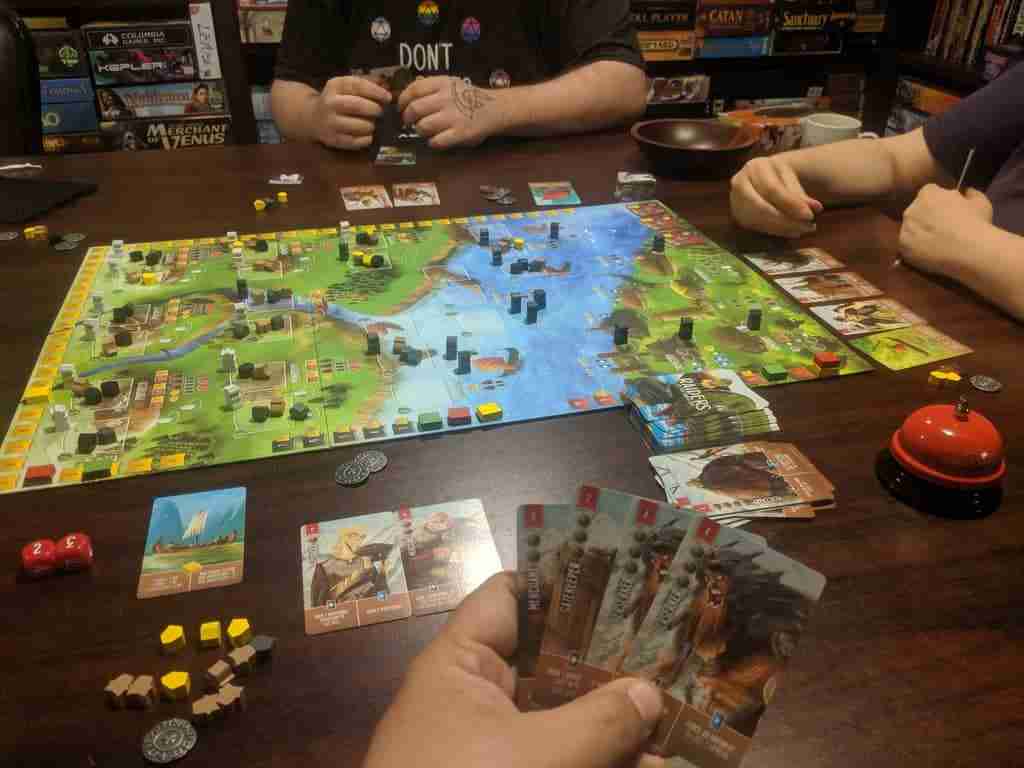 Let me tell you about the best new game of 2019, so far: Raiders of the North Sea.

Yeah I know, I should say the best new to me game of 2019. I also know I’m really late to the party on this one. This great game from Renegade Game Studios came out way back in 2015, and somehow I’m only getting into it now. That doesn’t diminish how much fun I’ve been having with Raiders of the North Sea, and in this review, I hope to tell you why.

Disclosure: I was provided with a review copy of Raiders of the North Sea from Renegade Game Studios. No other compensation was provided. As well, some links in this post are affiliate links. As an associate, I earn from qualifying purchases. There is no additional cost to you and we get a small commission when folks use these links.

I have no good reason to have not played Raiders of the North Sea until now.

before now. I remember when it came out that it had rave reviews. I remember some of my favourite podcasters talking about how much they were enjoying it. I even did a demo game of it in 2018 at the Renegade Game Studios’ booth at Origins that year and really liked what I saw. I just never actually got around to getting a copy and I didn’t know anyone else locally that had it.

That’s the problem with the current state of the board game industry. There are so many games that come out each year it’s ridiculously easy to miss a good, or even a great, game. That’s basically what happened here. I was busy playing other stuff, hyped about other games. Raiders of the North Sea just flew under my radar. Until now.

While visiting Origins 2019 I managed to snag a review copy from the Renegade Game Studios’ booth and finally got to give this worker placement/removal system a try.

What is the board game Raiders of the North Sea all about? 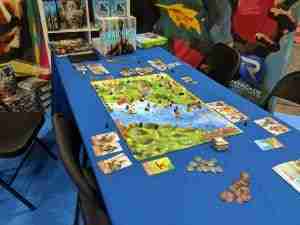 As already mentioned, Raiders of the North Sea

was released in 2015 and is published by Renegade Game Studios. It was designed by Shem Phillips and features art by the awesome Mihajlo Dimitrivski aka Mico.

I first encountered Mico’s art in Valeria Card Kingdoms and ever since then I’ve been a big fan (and yes I realize that Valeria came out after Raiders, as I said, I’m late to this party). The game plays two to four players, in about an hour to an hour and a half depending on the player count.

In Raiders of the North Sea, players take on the role of a tribe of Vikings. Focusing on the things that Vikings did best, this game is all about raiding, collecting plunder and impressing the chieftain. In order to do the raiding, players need to assemble their crew, collect provisions and improve their armoury. All of this is done using a unique, and I must say totally brilliant, worker placement/removal system.

At the start of the game, players start with a small hand of crew cards, some starting silver (used to hire more crew), and one black Viking worker.

Each round players either Work or Raid. This is done by players placing their one worker on a spot and resolving it’s action. Then they remove a worker from the board, either a new worker rewarded for raiding or a worker from a different spot, resolving that action. At the end of each round, each player will have one worker left in their hand.

The worker action spots do things like let you draw new crew cards, play crew cards for an action, gain silver, spend silver to place a crew card into play, give tribute to the chieftain, gain provisions or improve your armoury. Some of these spots require Grey or White workers which can only initially be gained through raiding. 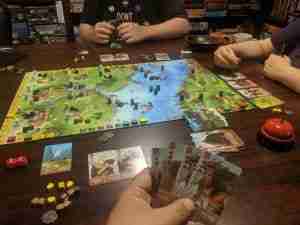 Raiding requires a set number of crew members, a number of provisions and sometimes some gold. Every raid is going to get you victory points and some plunder in the form of gold, iron and cattle. Some raiding spots may also have valkyries, when taking those as plunder you have to kill off members of your crew.

As this is a Viking themed game that’s not really a bad thing as the dead go to Valhalla and can score you some end game victory points.

Most raiding spots give a variable number of victory points based on the strength of your crew. That is determined by the crew members, your armoury level and sometimes the roll of special six sided dice (with sides: 2, 3, 3, 4, 4, 5). Even if your crew isn’t strong enough to earn the bonus points, you still get the plunder no matter what.

Victory points are also received for having your armoury levelled up, for the number of crew you’ve sent to Valhalla and for giving tribute to the chieftain in the form of sets of plunder. What the chieftain wants at any given time is determined by a random tile draw. The game ends when these tiles run out, or there are no more valkyries on the table or only one fortress is left to be raided.

Check out what comes in the box: watch my unboxing video!

What I have been enjoying about Raiders of the North Sea from Renegade Game Studios.

I didn’t figure there was a point in doing a “so what did I think” section for this review. I’ve already mentioned how much I’m loving Raiders of the North Sea

, not only at the top of the article but also many times now on this blog and our podcast. I dig it, I dig it a lot, that’s not up for debate.  What I wanted to do here was talk about what I have been digging so much. 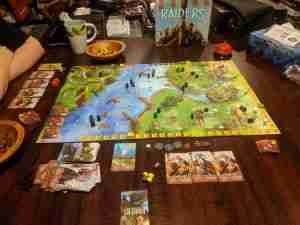 My favourite part of Raiders of the North Sea is the unique worker placement/removal system. It’s a really brilliant evolution of the standard worker placement mechanic. I’m a big fan of worker placement games in general and it’s awesome to see something new being done with the mechanic. What isn’t obvious at first glance is how much depth is added to the game by adding the removal part of the mechanic. By removing a worker you are freeing up that spot for someone else to place their worker, but by leaving it there you are opening it up to be taken for a second action.

There’s little worse than really wanting to hire a new crew member but being short silver and starting your turn with both the Silversmith and Barracks already filled with workers. Then you add in the fact there are three levels of workers and you get even more depth. Why worry about rushing to get a grey worker when you can just wait for another player to raid and get one and then later “steal” it by using it for your second worker action.

Another great aspect of this game is the graphical design and artwork. I’ve already noted that I love Mico’s artwork, but it’s more than that. It’s the functionality of the cards, the clarity of the board, and the simplicity of the iconography. That said my one major complaint about this game is a component one. 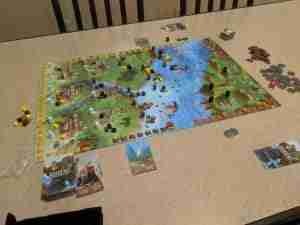 The one thing I do actually hate about Raiders of the North Sea is how close in colour the black and the grey Viking meeple are. Under the pot lights in my basement, I can’t actually tell them apart without holding them in my hands. Cranking up the contrast on my LED lights helps a bit, but not enough.

Deanna keeps talking about doing something to paint all of the Grey ones to somehow set them apart from the black ones and that’s something I think you pretty much have to do. Perhaps I will paint the horns on the grey Viking’s helmets.

Not many games are good at all of their listed player counts. Raiders of the North Sea is a standout exception to this. Not only does the game play just as well with two, three or four players, but there is also actually nothing you do to change the game due to the player count. There aren’t any cards to remove, no other side of the board, no worker placement spots to cover up. Nothing changes about this game when you swap up the player count and I love that!

Except for the one minor design issue of the black and grey meeple being too similar in colour, Raiders of the North Sea is basically perfect. It’s easy to teach, does something new, has plenty of depth and replayability and is great at all player counts. 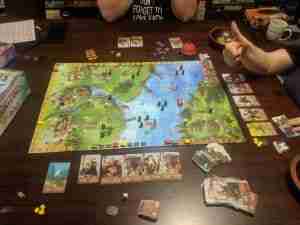 It’s not only me that has been digging it either. I’ve yet to teach someone this game that didn’t dig it. I will admit not everyone loves it as much as I do, but everyone has enjoyed playing it and noted they would play again. My wife, in particular, loves this game. She has, since playing it many times with me, declared it her favourite two-player board game of all time. High praise coming from her.

What I need to do now is try out the expansions.