Review of The Fox in the Forest, a trick taking card game for two players. 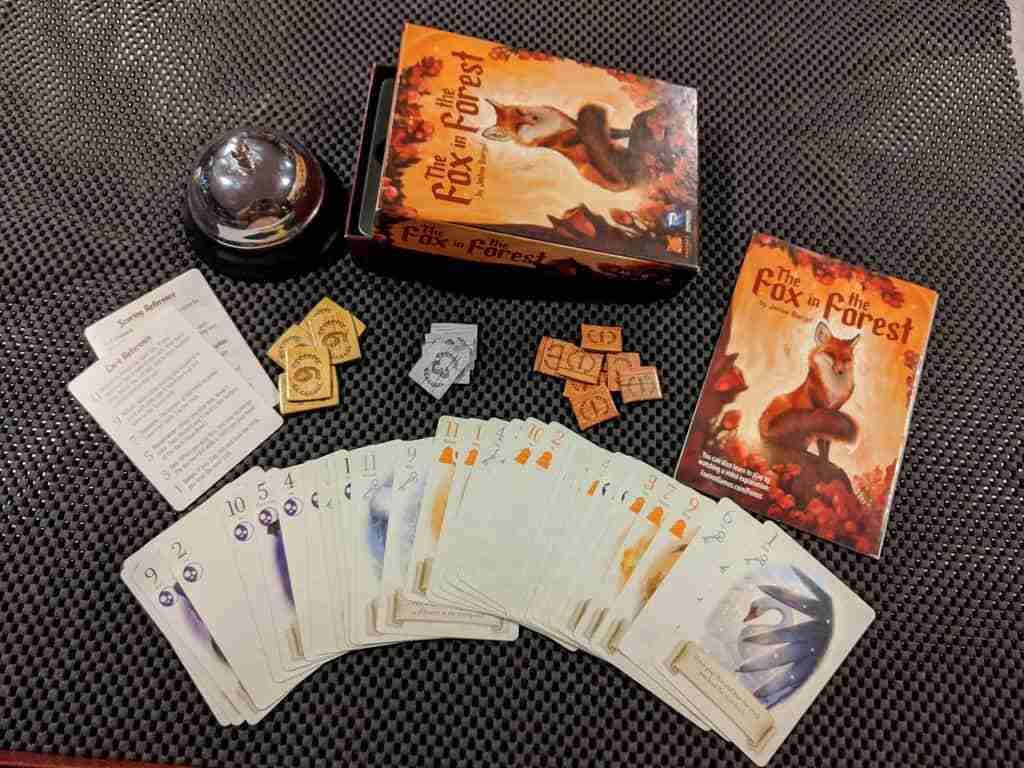 Some of the most popular tabletop games in the world are trick-taking cards games. Games like Euchre, Poker, Hearts and Spades. The Fox in the Forest is a modern trick-taking card game that is designed to be played with only two people.

I know what you are thinking, and it’s exactly what I thought when I first heard about The Fox in the Forest and that’s, “But how can trick-taking work and be fun with only two players?” Well, let’s find out.

What do you get when you pick up a copy of The Fox in the Forest?

The Fox in the Forest was designed by Joshua Buergel and features art by Jennifer L. Meyer and Keith Pishnery. It was co-published by Foxtrot Games and Renegade Game Studio in North America, in 2017. It plays two players only and each game takes about half an hour.

The main thing you get in a new copy of The Fox in the Forest is cards, thirty-five of them. Two reference cards and Thirty-three playing cards split over three different suits: moons, bells and keys. These are nice high quality cards with non-traditional suits but mostly standard playing card set up, except for the odd numbered cards.

All of the odd-numbered cards have beautiful fairy tale themed artwork on them and include some special rule text telling you how that card plays differently from the standard cards.

To see all game these components for yourself check out our The Fox in the Forest unboxing video on YouTube.

How does the two-player trick-taking game The Fox in the Forest work? 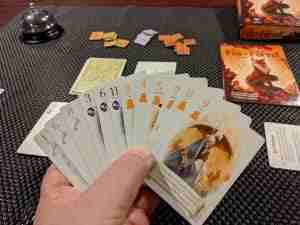 You start each round of The Fox in the Forest by dealing out thirteen of the thirty-three cards to each player. This leaves seven cards in the deck. You flip over the top card of the deck. This card is called the decree card. The decree sets the trump suit at the start of the round each round.

The player who didn’t deal leads and you play through thirteen tricks.

Standard trick-taking rules apply here. You have to follow suit if you can, if you can’t follow then you can throw off suit. The trick is taken by the player who played the highest trump card. Or, if no trump is played, by the player playing the highest card in the lead suit.

At this point, we have what is a pretty basic trick-taking game. But wait there’s more…

Every odd numbered card has a special ability that happens as soon as you play the card. For example, the 1 card is the Swan card and lets you take the lead in the next hand even if you lose the trick. The Fox card is number 3 and lets you swap a card in your hand for the decree card, thus potentially swapping up the trump suit each trick. The Woodcutter lets you take a card from the top of the deck and place one of the cards in your hand on the bottom of the deck, and so on.

The other thing that makes the Fox in the Forest work is the scoring.

Every round has thirteen tricks. In general, you want to take the majority of the tricks, but not all of them.

Winning seven to nine tricks is going to earn you a big six points, whereas your opponent is only going to get one to three points (for four to six tricks respectively). You need to be careful though because if you collect ten or more tricks you are considered too greedy and you end up scoring 0 points whereas your Humble opponent will score six. 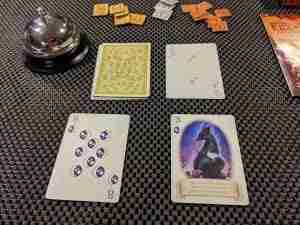 Having to balance how many tricks you take combined with the odd numbered card powers is what makes The Fox in the Forest the game it is and it’s also what makes it work as a two-player trick-taking game.

A full game of  The Fox in the Forest is played to a total of twenty-one points and so far that’s taken us just under half an hour each game played.

If you are curious to see the game in action be sure to check out our The Fox in the Forest Actual Play video on YouTube.

Overall impressions of The Fox in the Forest from Foxtrot and Renegade Games Studio. 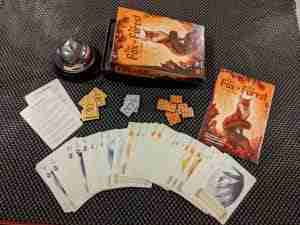 Overall I was very impressed by The Fox in the Forest. This is a game that I completely overlooked when it came out. At the time I didn’t think that a trick-taking game was going to work with only two players.

Now that I’ve seen just how well The Fox in the Forest plays this game is on my wishlist. That’s right I don’t actually own this game, at least not yet. I borrowed a copy off of a local gamer in order to play it as part of the Renegade Games World Wide Game Day a couple of Wednesdays back. That’s why I don’t have an unboxing video to share with you along with this review.

The Fox in the Forest is one of those small footprint, strategic, two-player games that my wife and I love to have with us when leaving the house. It’s the kind of game, like The Duke or Hive, that we will play at coffee shops or sitting at a brewpub having a pint. I even went so far as to go back to our two-player date night game article and added The Fox in the Forest to the list as I think this game is a perfect fit there. 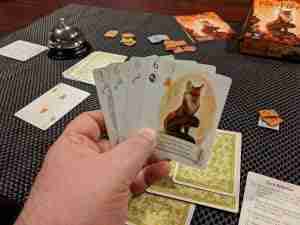 If you dig card games, especially if you like traditional trick-taking card games like Euchre, you owe it to yourself to check out The Fox in the Forest. If you are unfamiliar with the trick-taking mechanic this is a great example of a game in this genre and would make a great gateway to exploring that mechanic further.

I know there are some people out there that just don’t like card games, and I doubt The Fox in the Forest is going to win you over, but otherwise, this one comes strongly recommended.

Have you tried this excellent trick-taking card game? What did you think of it? What are some other trick-taking games you enjoy? Let us know in the comments.