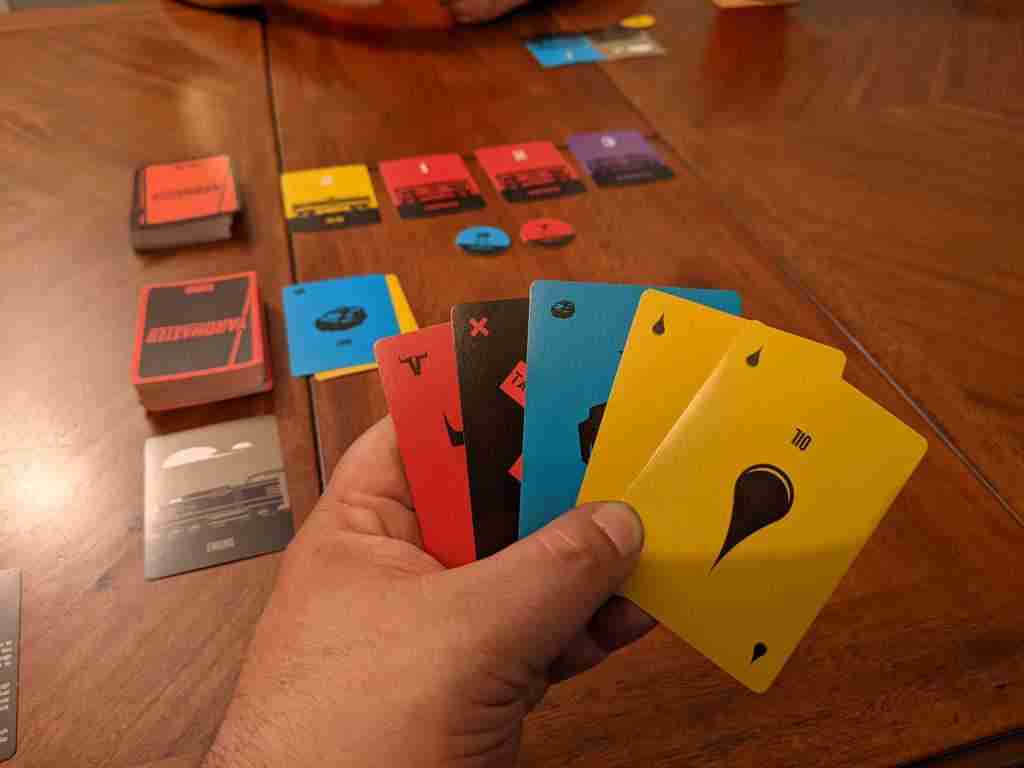 In Yardmaster, players are trying to connect up a cargo train that is worth a set number of points. They do this by purchasing goods cars and adding them to their growing train. It features a unique “sorting yard” system that can lead to some very rewarding combos.


What is the train game Yardmaster all about? 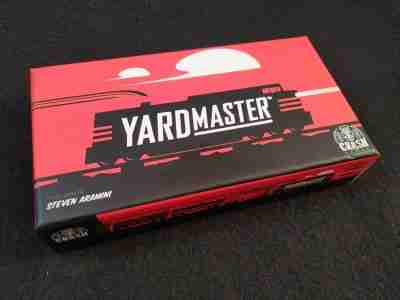 Yardmaster was designed by Steven Aramini and features art and graphic design from Darrell Louder, and Dan Thompson. Yardmaster was successfully kickstarted in 2014 and published in North America by Crash Games. Since then it has been re-themed and re-published as Aramini Circus in most parts of Europe.

Yardmaster plays two to five players with games taking under half an hour. This small box game has a nice low MSRP of $19.99 USD.

This game was awarded the 2015 Mensa Recommended Award and also won the 2014 Best Light Game award from Ion.

In Yardmaster, you control a freight yard trying to get your cargo train loaded first by being the first player to hit a set point goal determined by the number of players. You do this by collecting cargo cards and trading them in to purchase railcars. These railcars are worth one to four points but can only be added to your existing train if either the colour of the car or the point value matches the last car on your train. Railcars that don’t match go into your sorting yard and can be added to your train on a later turn.

The European version of this game Aramini Circus contains the exact same distribution of cards but changes the theme up to put players in charge of a travelling circus where you are adding animal cars to your growing circus train. This version features more colourful and cartoony artwork to go along with the theme change. 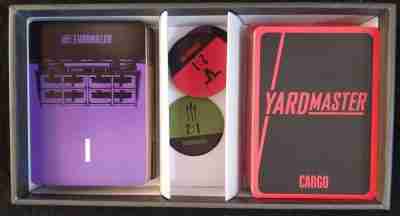 Since I got my copy of Yardmaster by buying it off another local gamer, I don’t have an unboxing video to share with you, but I will say the components here are pretty much what you would expect from a small box card game.

The game comes in a very sturdy small rectangular box, the inside of which is divided into three sections. The first holds the Cargo Cards, the middle holds five Trading Tokens and the Yardmaster Marker and the last holds the Railcar and Engine Cards.

The card quality is excellent and I really love the minimalist art style that they went for in the original version of the game. While I will say the new version does look more appealing, I think the original artwork is more functional.

How do you play Yardmaster the card game? 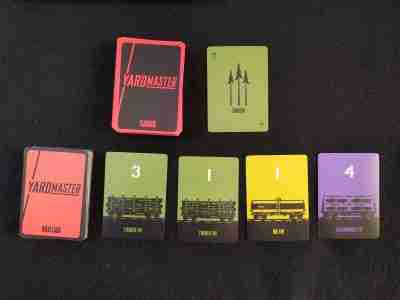 To start a game of Yardmaster each player takes an Engine Card and places it in front of them. The Railcar deck gets shuffled and four cards are placed face-up to form a market.

You then randomly give each player an Exchange Token placing any remaining tokens in the centre of the table. Next, deal five Cargo Cards to each player. Then flip over the top card from the remaining Cargo Deck and place it face up as a starting discard pile.

Each turn you take up to two actions chosen from those below: 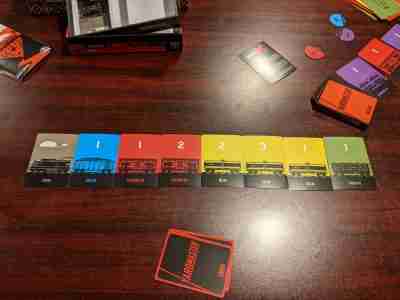 After buying a railcar, if it’s the first railcar you have purchased or if the colour or value of the card bought matches the last card attached to your train, it must be added to your growing train.

There are ten bonus cards in the Cargo Deck. When you draw one of these cards they go into your hand. They can be played on a later turn and don’t take an action to play. These bonus cards give you some form of one-time advantage, they include things like exchanging Cargo cards one for one this turn only, getting a free action, taking any card from the Cargo discard pile and more. 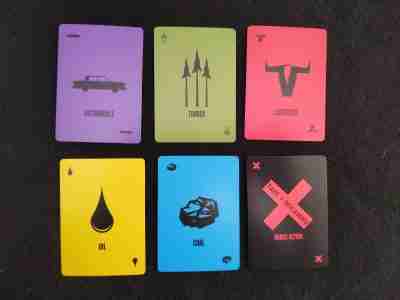 When one of these cards is played they are placed on the top of the discard pile. These discarded cards cannot be drawn as part of a Draw Cargo action. All of these cards are marked with an X to remind you of this.

The game ends immediately once a player hits the point total, based on player count, with your score being the total value of all cars in your train.

There are some minor changes when playing two players in which the yardmaster token passes between players but takes a turn to charge up before it can be used so that it only gives players a bonus action every other turn. 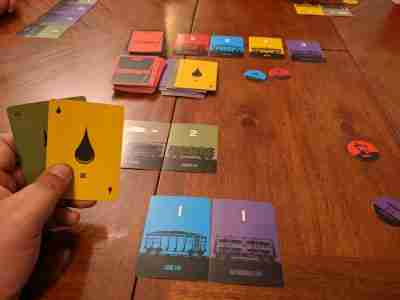 My first experience with Yardmaster wasn’t actually with this game. Instead, it was the even simpler, quicker, game called Yardmaster Express which comes from the same publisher but was created by a different designer. Yardmaster Express is a drafting game where players get a hand of cards, pick one card to add to their train and then pass their hand onto the next player. There are no tokens, no cargo cards, and no face-up market to buy from, but the train building rules of having to match a colour or value are the same.

I really dig Yardmaster Express but it’s super quick and short. Gameplay can be as quick as five minutes. Now that’s a fun five minutes but I prefer my games with a bit more meat on them.

That’s why when Sean Hamilton (not Sean from Hamilton) listed his copy of the full version of Yardmaster up for sale on Facebook I jumped at the chance to get it off him and to try out this more involved version.

I’m very pleased to say I haven’t been disappointed with this purchase in the least. 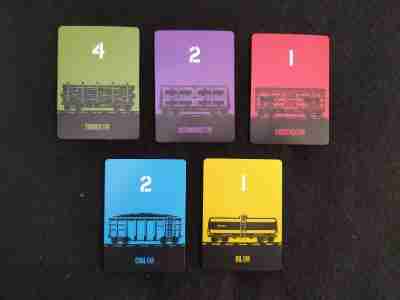 Yardmaster is a quick-to-teach and easy-to-learn game that has a surprising amount of depth. Quite a bit of this depth you likely won’t notice on your first play or two but it will quickly sink in as you realize the exact distribution of the cards, especially the Railcars.

In your first game, you will most likely not even realize there are five types of cargo, one for each player (at max player count), and that there are exactly five exchange tokens, one for each cargo type, but then by your third game or so you are going to know that there’s only one number four card in each colour and have figured out how many are left in the deck or are hiding in other players hands halfway through the game.

Another way Yardmaster surprised me is in the variety of different strategies that seem to work well, all of which need to be adapted to how the other players are playing. Trying to collect all the one cards so that the cars are cheap to buy and easy to combo can work, but so can being the only player who collects fours, or being the one who buys the cheap cars just to remove them from the market and deny them to other players. 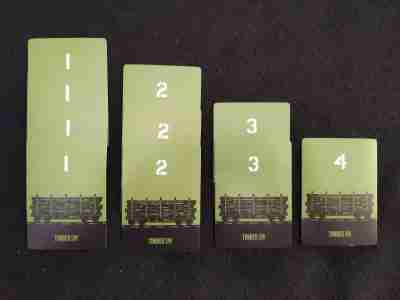 The Sorting Yard mechanic is the best part of the game. Not only is it a very valid way to collect cars you know the other players want, you can also set up some truly impressive combos. You can use your sorting yard to collect sets of railcars that will instantly connect to your growing train as soon as you are able to buy a card of the right type or value.

This system can also lead to some very rewarding come from behind wins, where a player has a train with very few cars in it right up until the final round, when suddenly almost every car in their sorting yard gets added to their train and they steal the win.  That’s where the part about adapting your strategy to the other players comes in because if you know what card a player needs for their combo to work everyone else can work together to make sure they don’t get it.

It’s this tactical and strategic depth that keeps me coming back for more and more. Right now Yardmaster is at the top of my favourite filler game list and it’s rare that we don’t play two or three rounds in a row when I break it out.

Overall I really dig Yardmaster. While Yardmaster Express is a fun light train game, it’s nothing compared to the full Yardmaster. This is a quick-to-learn, easy-to-teach, card-based train game with surprising depth and strategy. 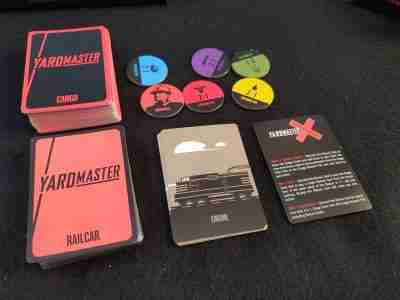 If you are looking for a new thinky filler I don’t think you can go wrong with Yardmaster. If you are a fan of train games, Yardmaster offers up a very different approach to the train theme. If your group loves Ticket to Ride, I think this is an awesome next-step train game due to the fact that your group will already be familiar with the way you use Cargo Cards to purchase Railcars.

If you happen to be one of those people who think the only “real” train games are those with stock portfolios and route building, this may not be the game for you.  Though personally, I love heavy train games and I also love Yardmaster as a great filler with a similar theme. It’s something that could be great to play between rounds at your Puffing Billy tournament.

Honestly, this is one of those games I think everyone should give a shot. The mechanics are simple but interact in a neat way and I think everyone can find joy in doing a nice three-plus card combo from their Sorting Yard to their train, especially if that’s what wins them the game. 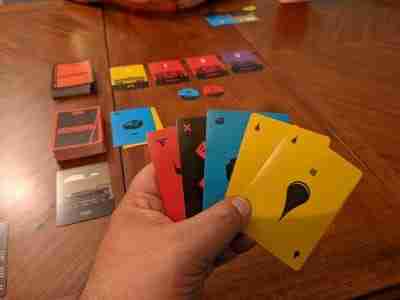 The only real problem with this game is that it looks like Yardmaster is currently out of print.

Now I do have good news, you can get the game free right now. There’s a free print and play version of Yardmaster on Board Game Geek!

Not only is this a great way to get this out of print game, but it’s also a good way to try the game before buying it if it ever does go back in print.

I’ve mentioned Yardmaster before, most recently in my 25 Next Step Train Games from Ticket to Ride article and in our Back to Class podcast episode, and I expect it will come up again in the future on some other game recommendation list. I really dig this game and think it should appeal to a broad range of gamers.

What’s your favourite train game that’s not about route building? Let us know in the comments below!