Board Game Review: Super Cats from The Op, An Evolution of Rock Paper Scissors with Awesome Artwork When I first unboxed Super Cats, a three to six player filler card game from The Op, I was totally confused.

In the box for Super Cats pretty much all you will find are cards with art on them. There are no numbers, no mechanics, nothing but the art of cats and super-powered cats and a huge robot dog. I had to read the rules to discover that these cards are all that this dead simple rock-paper-scissors based game needs to be fun.

Disclosure: The Op provided me with a review copy of Super Cats, no other compensation was provided. Some links in this post are affiliate links. Using these links doesn’t cost you anything extra and it helps support this blog and podcast. As an Amazon Affiliate, I earn from qualifying purchases.

What do you get with a copy of Super Cats?

Super Cats was designed by a surprising number of big-name game designers including: Antoine Bauza, Corentin Lebrat, Ludovic Maublanc, Nicolas Oury, and, Théo Rivière. It features artwork from Xavier Gueniffey Durin. Here in North America, it was published by The Op. Super Cats plays three to six players and a game takes under fifteen minutes.

The first thing to note about Super Cats is that it comes in a nice small box that is very portable. Perfect for bringing along with you pretty much everywhere.  You can see this box and all of its contents, including the dreaded RoboDog in our Super Cats Unboxing Video.

When you open the box you quickly see that it actually could have been even smaller. The only thing in the box is a fifty-three card deck and a set of rules. Once you learn the rules you could just carry this deck around in a pocket. Personally I’m probably going to toss it in my Quiver Card Carrying Case.

The rules are very simple, and well presented in the rulebook with a ton of artwork and a lot of examples. It’s the examples and the small size of the rulebook that make the rulebook as long as it is at 11 pages. I think you could summarise everything on one page.

The cards themselves are palm-sized and of good quality. The majority of them are pictures of cats. Each standard cat card shows a normal cat doing cat things on the front and a super-powered version of that cat on the back.  There are also two special cats, the Silver and Gold Cat, which are used in phase two of the game when playing with five or six players. 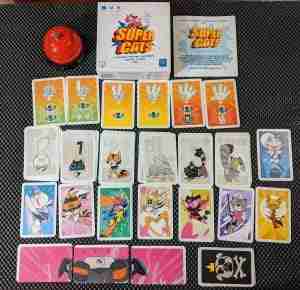 There are also a set of twelve cards that make up RoboDog and I appreciate the use of multiple cards to make the villain in the game seem so large and terrifying.

The final set of cards is six cards showing what happens when various numbers win in part one of the game (more about that in a moment).

Finally, there’s a cheap paper box insert that stops the cards from sliding around in the box loose.

That’s it, and that’s all you need for playing this superhero-themed version of roshambo.

A game of Super Cats is played over two episodes.

Episode 1 is Transformation. Here each player forms a team of five regular cats and battles to be the first to transform their cats into Super Cats and become the Hero of Episode 2.

Episode 2 is Fight. The Hero player uses their super-powered cat team to face off against RoboDog which is played by the other players. 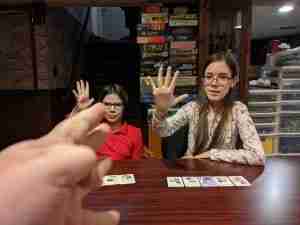 Players each select five cats. They can be all the same breed or you can mix and match. These cards are placed face up in front of the player, cat side up.

Each round, players simultaneously shout SU-PER-CATS and hold up one hand showing zero to five fingers. The player who is holding up the highest unique number wins the round and will get to flip over some cats. What they get to flip is based on the number and is also indicated on the activation cards for quick reference.

The first player to flip all five of their cats will win episode 1. 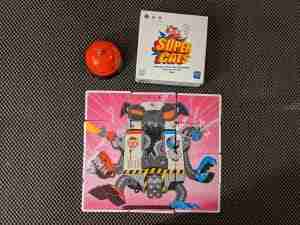 The winner from round one keeps their five superpowered cats in front of them. Everyone else can remove their cat teams from play because it’s now time for them to play RoboDog. RoboDog is assembled by placing its twelve cards out on the table. From here on out it’s the hero player vs. everyone else.

Each round players simultaneously say RO-BO-DOG and hold up one hand showing zero to five fingers.

If any of the RoboDog players match the hero player’s number, then the hero must flip a number of cats, equal to the number of players that they match with, over to their non-super side. If at any point the hero player has only normal cats in front of them, they lose.

If the hero player manages to throw a unique number, they do damage to RoboDog equal to that number. Each card that is part of RoboDog indicates one health. Once all twelve of the cards forming RoboDog are removed the hero wins.

There is also a special rule for the hero showing a fist or a zero. This is called a Super Meow! and if the hero player manages to win with a non-matching zero they get to flip any normal cats they have back to their super side.

Episode 2 continues until either the Hero or RoboDog is defeated, with victory going to the undefeated side.

Special Rules due to player count:

When playing Super Cats with only three players, the two players who play RoboDog play with both hands.

When playing with five players, in Episode 2, the hero gets to take the Silver Cat card. This ally can block all damage during one round but then vanishes by flipping over the card. The Gold Cat card is identical and is given to the hero player when you are playing with six players.

When I first got Super Cats in the mail I was surprised. This wasn’t a game that I had asked to review, it’s something The Op tossed in with my shipment of Batman Talisman Super-Villains Edition and Telestrations Upside Drawn.  Later, when I recorded our Super Cats Unboxing video, I was rather confused because I don’t think I’ve ever seen a card game before where there is literally nothing on the cards but artwork.

This, I still don’t quite get. In my head I picture all these distinguished designers sitting down having a beer at a con and someone coming up with the idea that they should all come up with an improvement on Rock, Paper, Scissors with Super Cats being the result of that night. 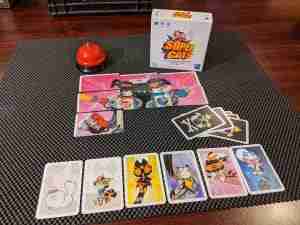 As for gameplay, Super Cats is a really simple card game that you can and play a full game of in under fifteen minutes. It is the very definition of a quick filler game. This is both what is great about Super Cats and what is wrong with it, all at once.

If you need a quick game that you can teach anyone in under five minutes and finish a full game of in under fifteen, Super Cats can be a fun choice. It can be a great way to get people in the gaming mood at the start of a game night or it can be a good filler game for players to play while waiting for another game group to finish.

What I can’t see is anyone really planning to play Super Cats as the game for the night. While there are some filler games out there that you may want to play a bunch of times in a row, filling up a longer game slot, for me, this isn’t something I would want to do with Super Cats. My kids felt the same way. After about two rounds, they are done with the game and ready to move on to something a little less silly. At this point, my kids are 10 and 12, and I do think that when they were younger, they may have found Super Cats to be more engaging.

If a game about superpowered cats can’t even keep my kid’s attention for more than two rounds, there’s little chance it’s going to keep any adult engaged for much longer. Super Cats is a fun activity in small doses. Good for some laughs and to get people talking and engaged, but not much more than that. 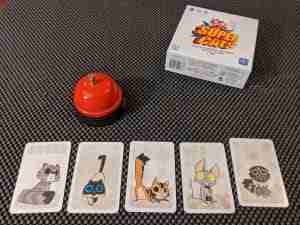 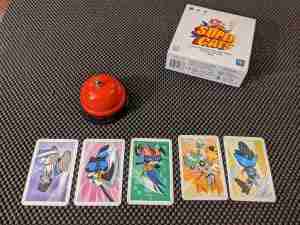 Overall, I think Super Cats is an amusing diversion. It’s a game that I will probably bring out to events to use as a warm-up at the start of a game night, to get people interacting. I do really dig the artwork and I love how portable it is, but it’s just a little too silly and light for me to come back to it often.

If you are looking for a new, dead simple, portable, filler game with an amusing theme, there’s good reason to check out Super Cats. There are lots of other games that fit that same niche though and while Super Cats is a fun diversion, there’s just not a strong enough game here for me to recommend it heartily.

I will admit one thing, they did manage to actually improve on Rock, Paper, Scissors, I would much rather play Super Cats than a round of roshambo.

Super Cats is a very light quick filler game. What is your favourite game like this, perfect for the start or end of the night or to fill some space between games? Let us know in the comments below.