You are here: Home / Reviews / Tanto Cuore, An Improvement on Dominion with a Unique Theme – Review

Tanto Cuore is an early deck-builder that has its theme steeped in Anime and Japanese maid culture. This year marks the 10th anniversary of the game and I have it on good authority that we can expect a 10th anniversary edition soon.  For this review though I’m looking at the original game published in 2009.

Disclosure: Some links in this post are affiliate links. Japanime Games sent me a copy of Tanto Cuore for me to review. No other compensation was provided.

A note about the Japanese Anime Maid theme of the card game Tanto Cuore. 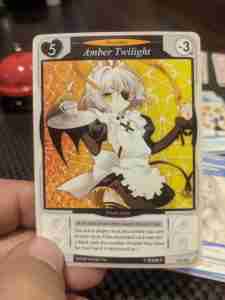 Despite what it may look like at first glance Tanto Cuore

is not an adult card game. It is recommended for ages 13+ and while some of the themes and artwork is suggestive, it never actually crosses that boundary into adult places.

In this game, the players represent a master of a household who will be hiring maids with a resource called love. Those maids service their master and many of the maids can be “chambered” and placed into a player’s private quarters. It’s hard to deny there’s something sexual there, but it’s all implied, not stated. It’s all kind of innocent, but totally not at the same time. You aren’t going to find any nudity here either and even the amount of “fan service” is fairly low, though some cards, like the Love cards, are more risque than others.

This is all part of Japanese maid culture, which is a thing. A rather popular thing. I admit it’s not something I know much about, except for the fact that I know it’s a thing. Here is a rather solid article from Inside Japan that tries to explain the whole concept: Maids in Japan: From Geisha to Kawaii Culture.

Some people are going to dig this theme. Some people are going to hate it. I’m assuming most of the later aren’t even going to be interested in the game and probably won’t be reading this review. That’s cool. Not every game is for everyone and that’s a good thing about our hobby. The theme of this game is what it is, and it’s up to you to decide if that’s something that will impact your desire to play or own the game. What I’m going to focus on for the rest of this review is the gameplay, which I have to say I was impressed by.

Tanto Cuore is a deck-building card game very firmly rooted in the tradition of Dominion. 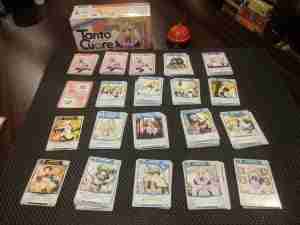 was released in 2009. I don’t know the exact date but I do know that Dominion

was released in 2008, the year before, and it shows. It really shows. Tanto Cuore is very much a direct descendant of the deck-building card play of Dominion.  Many of the mechanics of this game have direct ties to mechanics in Dominion. That said Tanto Cuore isn’t just a retheme of the original game, it does do some things differently.

In Tanto Cuore, you play the master of a house who is trying to become The King of the Maids. You are doing this by the tried and true deck-building method of using your cards to buy better cards that let you buy more cards and even better cards that eventually let you buy point-scoring cards. In this case, the cards you are buying are maids and the resource you are using to buy them is Love. 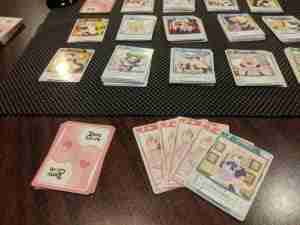 Each player starts with seven 1 Love cards in their hand and three Colette Framboise Maid cards. Colette cards do nothing but score 1 victory point at the end of the game, as well as awarding the player with the most Colettes employed with five bonus points at the end of the game.  In the centre of the table is the Town, the maid market where ten different stacks of “General Maids” will be laid out.  The game comes with sixteen different General Maids adding quite a bit of replayability to the game with just the base box.

In addition to this, the Town also has a deck of Private Maids, which is a ten card deck in the base set. At all times two of the Private Maids will be available to hire. This is one of the first major changes from Dominion that you will notice. It adds a random element to what cards are available each game. An addition I really like.

Private Maids are also different in another way. When you buy them they don’t go into your deck. Instead, they go directly into your playing area, turning Tanto Cuore into a deck-builder with a tableau element. This tableau is called your “Private Quarters.” While in your Private Quarters Private Maids give an ongoing bonus that can be used each round. 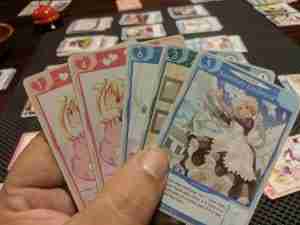 Along with these cards are the cards you can always buy every game. These include the one victory point Colette cards already mentioned, the Maid Chief Marianne Soleil who is worth six points but costs nine love and does nothing else for you (the Province equivalent of Tanto Cuore) and the Love cards that come in one, two and three love dominations.

There are also two event cards. These are similar to the Curse cards in Dominion, as they are cards that can be played onto your opponents. In this game, they are actually played into your opponents Private Chambers. The core game has two events: Bad Habits and Illness. Bad Habits give negative points at the end of the game whereas illnesses can be played on Chambered Maids to negate their card effects. 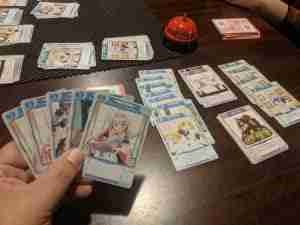 So what’s a Chambered Maid? These are any maids in your Private Chambers (your personal tableau). These include the Private Maids you’ve bought from the town as well as any other General Maids that you have Chambered. Some of the General Maids have abilities that let you spend Services (actions) to remove them from your deck and place them into your Chamber. This is mostly done to thin your deck but some of the maids actually give you new abilities or end game scoring opportunities when chambered.

This whole Chambering system is the biggest diversion from Dominion you will find in Tanto Cuore. This system actually lets you remove unneeded cards from your deck as well as leading to interesting decision points where you need to decide if you should keep a card in rotation for its in-game benefit or if you should start chambering them for end game scoring. It’s something I’ve not seen in another deck-builder. 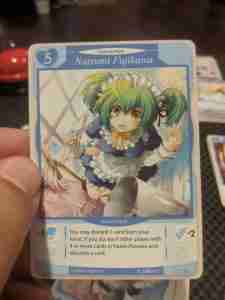 As for what the rest of the cards do. Most of them give you one or more of four things. Servings, which is the term for actions in the game. Hearts or Love which are used for buying new cards. Draws which let you draw more cards from your deck, and Employs which let you buy more cards.

Here’s where you really see the Dominion roots in this game. Each turn you only get one Serving and one Employ, meaning you get one action and one chance to buy, unless you use that one Serving to play a maid that gives you more Servings and/or more Employs.

Players continue to take one Serving and one Empoy a turn (modified by cards) until two of the maid decks run out (note it’s the maid decks and not the Love decks or the Event decks). At that point, the game ends and players add up their points. Some cards are worth points as soon as bought, others only score points at the end of the game based on some criteria. For example, there are three maid cards that are all sisters, the Azure Sisters. Players score bonus points for having complete sets of these sisters in their Personal Chamber at the end of the game.

The player with the most points is declared King of the Maids.

I found the card game Tanto Cuore from Japanime Games to be a surprisingly good deck-building experience. 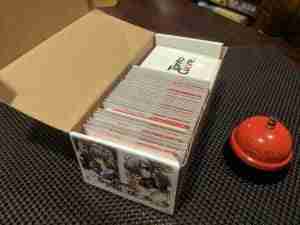 I fully admit that I signed up to review Tanto Cuore

because I wanted to do a solid for Japanime games in hopes to eventually get to review some games in their Robotech lines. I also have to admit that I didn’t expect much from this game. I was expecting a total knock off of Dominion with some cute and suggestive art. Tanto Cuore ended up being significantly better than I expected.

I am not a big Dominion fan. Sure, like everyone else, I was enthralled when it came out. You can even read my original review on Dominion where I was blown away by this new style of game, but I found that I quickly got tired of the standard market and what seemed like a limited number of winning strategies in the core game. I found the game got a bit better with Intrigue but stopped buying expansions after that.

I was very pleased to see that Tanto Cuore did something fresh with those original Dominion mechanics. Yes, it still has a static market, but in addition to that, you have the Private Maid deck. That alone adds that touch of variety and randomness that I found lacking in Dominion. Then you add in the whole tableau building aspect and you have a game that is actually quite distinct from Dominion while still clearly showing its roots.

The base gameplay is very similar but there are more options, leading to more of a decision tree and more strategic and tactical play. It didn’t feel like Tanto could as easily be “solved” as many people claim has been done with Dominion. I do have to admit that I haven’t really played it enough to say that with any certainty but I definitely didn’t see one overpowering strategy in the games I played. 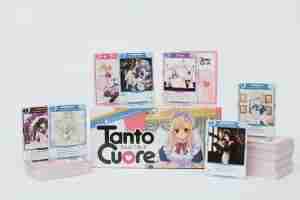 In the end, all I can really say is that I liked it. I’ve enjoyed every game I’ve sat down to play of Tanto Cuore and the same goes for everyone I have played the game with. Most players when they first see it dismiss it and then the same players, at the end of the game, I find commenting how they were surprised how good an experience it was.

While I did enjoy Tanto Cuore I think it’s worth noting that it’s in no way my favourite deck-building game. There are many more modern deck-builders that I prefer overall. Some of the aspects, like the mostly static market, feel somewhat dated and I don’t remember the last time I played a deck-builder with only one resource to worry about. I did have some fun with this game though and if you are a fan of the whole maid theme or if you liked Dominion but want to try something that mixes it up a bit, I do suggest you check out Tanto Cuore.

, a game about collecting a house full of maids. Have you played this evolution from Dominion

? What did you think? Let us know in the comments!

One last thing you can do before you go is check out my unboxing video of Tanto Cuore. 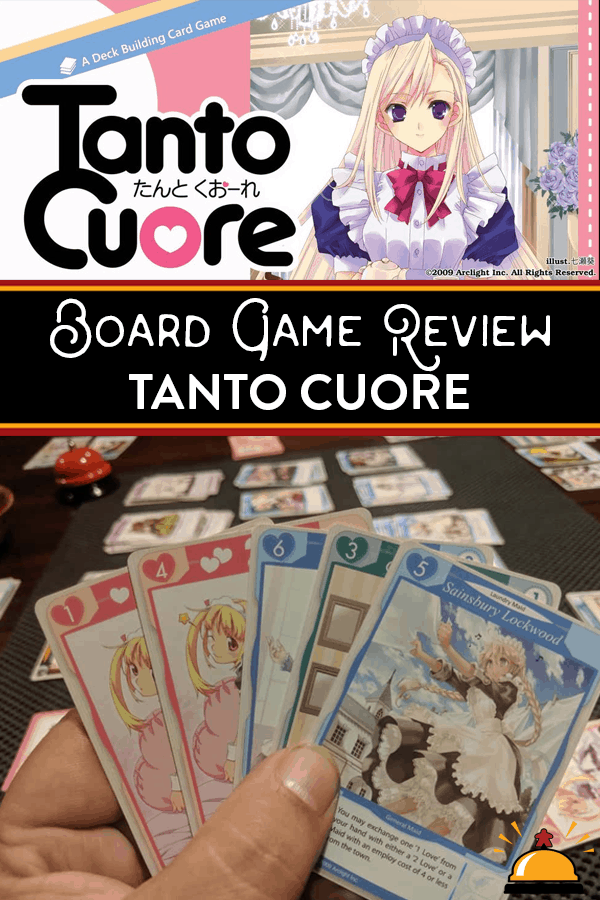 Board Game Review: Azul Summer Pavilion, the latest and best tile drafting game so far from Next Move Games A Review of EXIT The Game: The Catacombs of Horror, a very difficult, two part, escape room in a box 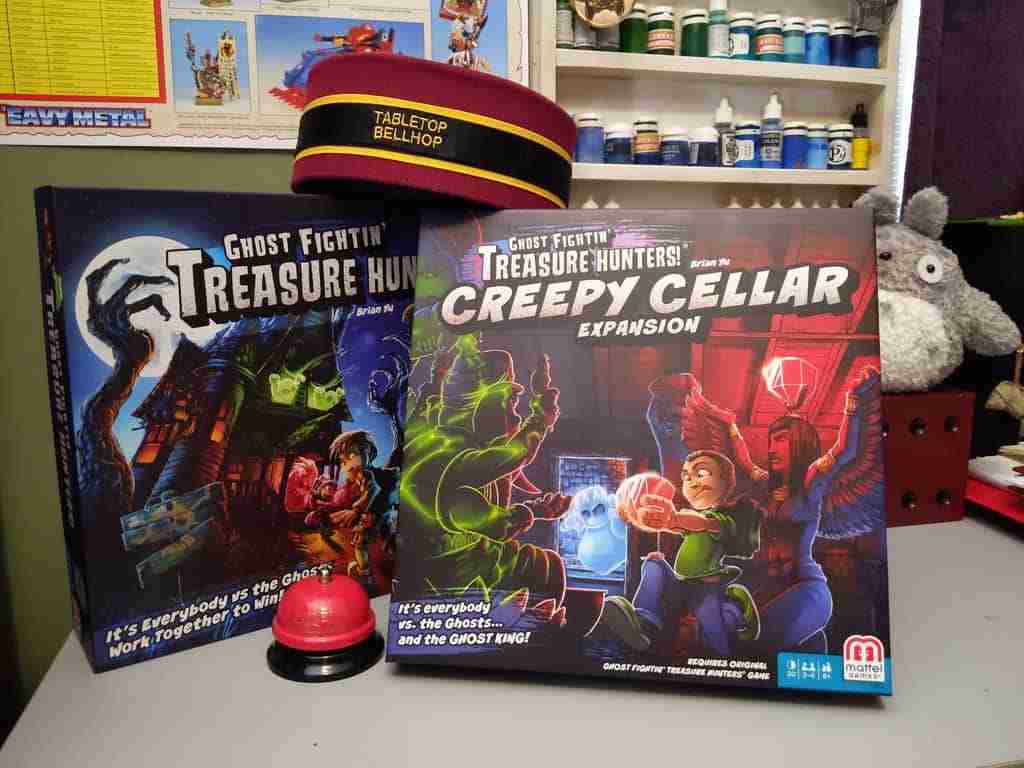