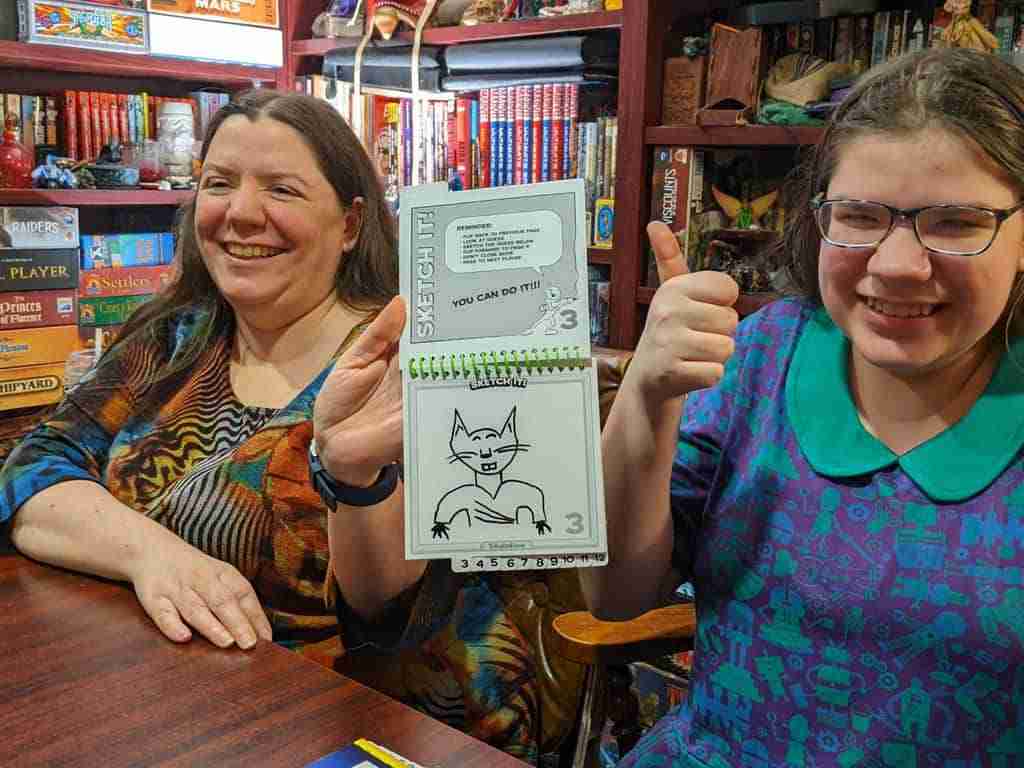 Find out what the Telestrations 12 Player Party Pack is all about. Is it worth picking up? What if you already own Telestrations?

This update to Telestrations not only allows you to play with more players but it also has improved components and 600 new clues!

Disclosure: Thank you to The Op for sending us a copy of this 12 player version of Telestrations to check out.  Links in this post may be affiliate links. Using these links doesn’t cost you anything extra and helps support this blog and our podcast.

What do you get with the Telestrations 12 Player Party Pack?

Telestrations 12 Player Party Pack was designed by and published by The Op in 2011. This is a reimplementation and re-release of their highly popular party game Telestrations. The original game was published two years earlier in 2009 and is still available for sale.

This newer version of Telstrations has a player count of four to twelve players and includes six hundred new clue words and phrases, as well as some nice component upgrades. The Telestrations 12 Player Party Pack features a very reasonable MSRP of $39.99 US.

Telestrations is a formalized version of Eat Poop You Cat or The Telephone Game. In each game, players get a clue, attempt to draw that clue and then pass their drawing to the next player. They write down what they think the drawing represents and pass that to the next player who draws an image based on their guess. The game continues with players alternating between drawing and guessing until the book gets back to the original player at which point everyone shows off their books and people laugh at the way things progressed.

One of the things that did change a bit with this newer edition of Telestrations is the component quality (I encourage you to check out our Telestrations 12 Player Party Pack Unboxing Video on YouTube to see just what I mean). 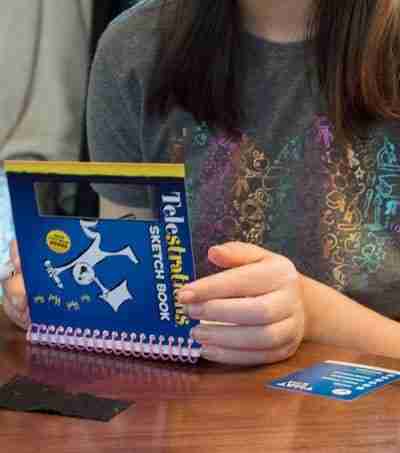 Upon opening the box, the first thing I noticed, of course was the fact that there are twelve player books, each with twelve pages. Next, I spotted twelve fine point markers. These are a big improvement over the markers included in the original game which were rather fat tipped.

Along with this you get the very clear and easy to learn from instructions, some cloth erasers, a pack of clues that match the original game, a separate pack of new clue cards and a card holder that, thankfully, fits both of these card decks.

There’s also a six sided die which is used for determining which clues you should be using and a one minute sand timer.

All of this nests neatly into a plastic box insert.

Overall the component quality here is excellent. The dry erase coating on the books works great and I really appreciate the thinner markers that come in this set.

How do you play Telestrations? 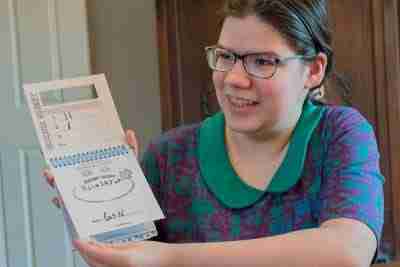 To start a game of Telestrations each player takes a book, a marker, an eraser and one card.

Some cards include blank clues and whenever these come up the player is encouraged to pick whatever they want for their word or phrase. Some cards also feature a small cartoon Telestrations mascot on them, these tend to have more difficult clues so when you get one of these you are free to pick any of the words or phrases on the card instead of sticking with the die roll. 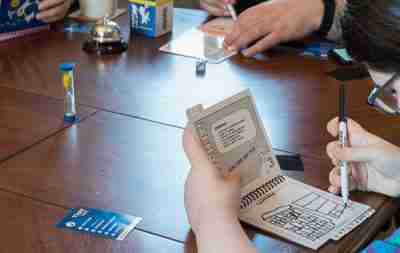 The rules in Telestrations are simple, you have one minute to draw what you can with the only restriction being that you can’t use any letters or numbers.

Once you are done drawing you flip your book to the next page and pass it to the next player. Once everyone has a new book they then look back at the drawing and write down what they think the drawing represents. After writing down this guess everyone flips the page and passes the book again. With the new book they just received, everyone then tries to draw that last guess. This continues with players alternating between drawing and guessing until everyone gets their own book back.

Then one by one players show off what is in their books, which should result in a lot of laughter. 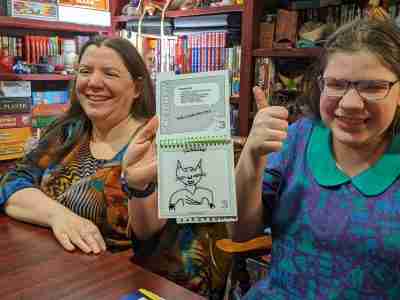 Friendly scoring is based on players picking their favourite sketches and guesses in their book, giving the players who made them each a point. A bonus point is awarded to the player if the final guess in their book matches the original word or phrase.

If everyone has fun, then you all win!

Telestrations is one of the best party games I’ve ever played. 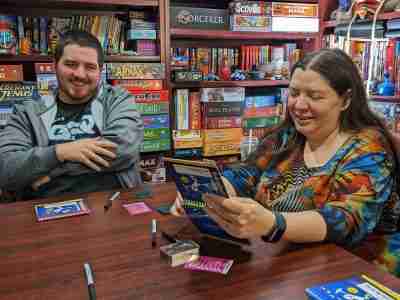 I have been a fan of Telestrations for a long time. I’ve owned the original, eight-player, version for many years now. I can honestly say that I have never laughed as hard playing any other game as I have while playing Telestrations. This is a fantastic party game that I have enjoyed playing with gamers of all ages, from younger kids to seniors.

One of the best things about this game is how much fun it can be when things go wrong as well as how awesome it can feel when you get your book back and the final guess actually matches your clue. Because Telestrations is just as much fun when it goes right as when it goes wrong it ends up being fun for players of all artistic skill levels.

The one minute time limit is another thing that makes this game fun, even for people who don’t think they can draw well. One minute is not a lot of time and even players who may be fantastic artists don’t have enough time to draw well. 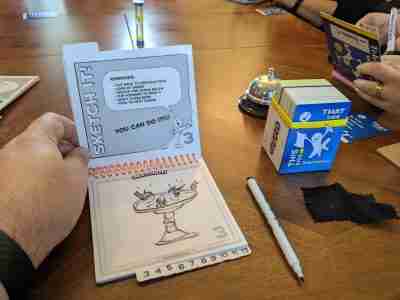 Along with this a simple stick figure and a few well placed lines can be more effective at getting a message across than a complex drawing.

Another aspect that I like about Telestrations is that players don’t actually have to know what the words or phrases mean in order to draw them. This makes the game much more approachable than you would think for playing with younger kids. It can be pretty easy to draw “Don’t look a gift horse in the mouth” without having to know what that phrase means.

Another house rule we like to use to keep the game accessible for our girls is to let them pick any clue on their cards instead of having them follow the die roll.

On the opposite end of the spectrum this game can often go quite blue when playing with adults. With the right crowd even the simplest words or phrases can be drawn quite lewdly. For people that really enjoy taking their game in that direction The Op also publishes an adult version called Telestrations After Dark. 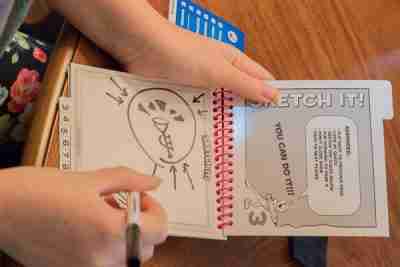 As for what sets the 12 Player Party Pack version of Telestrations apart from the other printings, the most obvious thing is that it plays at a higher player count. Each book here has twelve pages and there are twelve books, allowing twelve people to play simultaneously with one box.

The next change is the use of thinner markers. While the fat headed markers in the original game actually helped balance the skilled artists with the doodlers a bit, everyone I’ve played with prefers the new markers.

One surprise for me when unboxing this version of Telestrations was the fact that it comes with 600 new words and phrases. I’ve personally played Telestrations enough times that I know I’ve seen all of the original cards, most of them multiple times. It’s nice to have some new cards to throw into the mix.

The only parts of Telestrations I don’t love are the one minute time limit and the scoring rules. Thankfully it’s easy to fix these with some simple house rules. 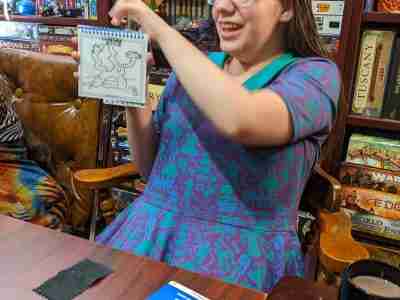 For us, especially when playing with our kids, we find the one minute limit a little too short. To fix this I stole the timer rule from Galaxy Trucker, where everyone starts drawing and only when one player is finished drawing do they start the timer. The rest of the players then have until the timer runs out to finish up.

As for scoring, we found Friendly scoring to be more fun and have only used Competitive scoring a couple of times. Most games we skip both and use the time that would be spent giving out points to play another round. Like many party games, the points in Telestrations are mostly arbitrary. The true point of this game is to have some silly fun and if your group is having fun, then you all win.

Overall I’ve loved Telestrations since I first played it many years ago and that hasn’t changed. This is a game we continue to play regularly and I don’t expect that to change any time soon. As for the 12 Player Party Pack, I found it to be an improvement on the original printing. Besides featuring a higher player count, which can be useful, it also has better components and more words and phrases to use. 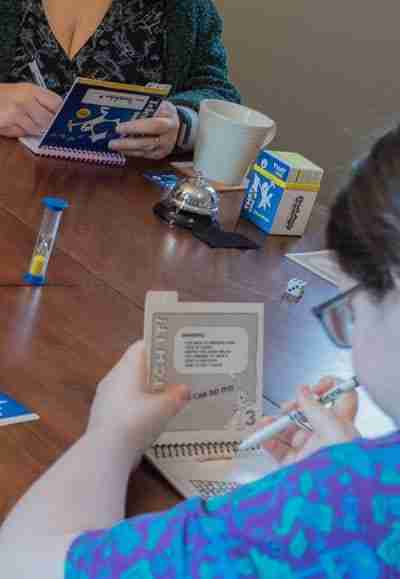 If you are looking to pick up your first copy of Telestrations then I strongly suggest grabbing the Telestrations 12 Player Party Pack.

This is true even if your usual gaming group isn’t that large. While this version of Telestrations will play up to twelve players, it still works great with only four. Plus, you never know when you may end up with a larger group than you expect for game night.

But is this expanded edition of Telestrations worth picking up if you already have the original eight-player version?

Well, now that I personally own both, I do think it’s worth grabbing the 12-player edition if you get the chance. The larger books and thinner markers are worth the upgrade.

If you have the original I suggest that you pick up the Party Pack and then donate your original copy to a less fortunate gamer, a library, a school, or somewhere else that it will see some love and hopefully introduce some new players to the wonderful laugh-filled world of Telestrations.

For more Telestrations content I invite you to check out my Telestrations 80s & 90s Expansion Pack Review. This small box expansion features 50 new cards with 600 new words and phrases.

You can also read my Telestrations Upside Drawn review where I take a look at this unique cooperative take on Telestrations.