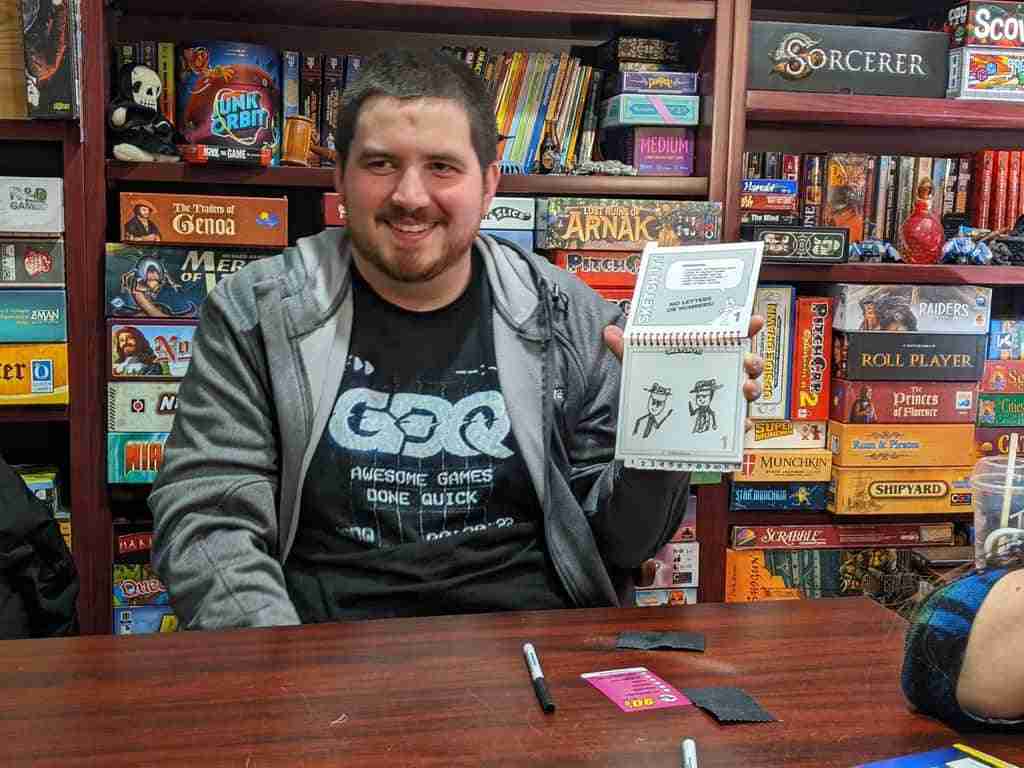 Let’s take a look at the first expansion for Telestrations, one of my favourite party games. The Telestrations 80s & 90s Expansion Pack contains 600 new words and phrases to add to your Telestrations games.

Disclosure: Thanks to The Op for sending us a copy of this expansion pack to check out! Links in this post may be affiliate links. Using these links doesn’t cost you anything extra and helps support this blog and our podcast.

What do you get with the 80s & 90s Expansion Pack for Telestrations? 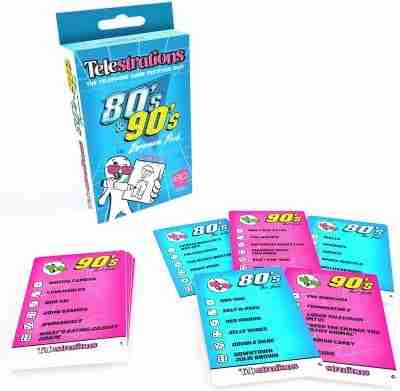 The Telestrations 80’s & 90’s Expansion Pack is the first official expansion for Telestrations. It was designed by and published by The Op (or USAopoly) in late 2021. This small card pack expansion has an MSRP of $12.99 US.

You get six-hundred new words and phrases spread over fifty cards in this Telestrations expansion. Each card has 80s themed clues on one side and 90s clues on the other. This expansion works with both versions of Telestrations, the original and the Telestrations 12 Player Party Pack, as well as Telestrations After Dark. It could also be used with Telestrations Upside Drawn, with the addition of some slight rules tweaks and a six-sided die.

For a look at these new cards and the small box they come in I invite you to check out our Telestrations 80s & 90s Expansion Pack unboxing video on YouTube. It’s one of the shortest unboxings I’ve ever done as there really isn’t much to show off here. This is a single card pack that hold the cards which include the new clue cards and two rules cards. These rule cards include an optional rule to add to your games for people who may not get all of the references on these new cards. 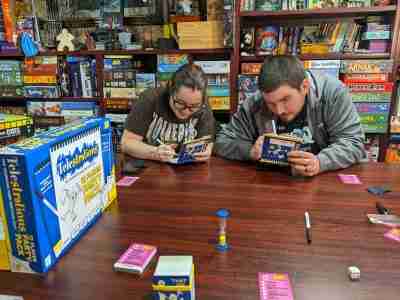 When starting up a game of Telestrations your group decides what to do with these new cards. You can choose to play the game only using these new cards, you can shuffle them in with your existing cards, or you can have each player decide if they want a standard card or one of the new cards.

All other rules for Telestrations stay the same.

One nice touch they added to the cards in this expansion is that they included band names with song names and a few other cues, like “Broadway Musical” for Cats. 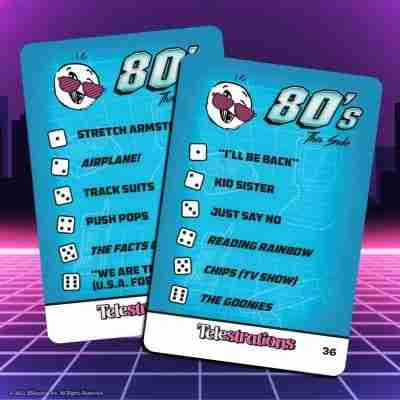 Due to the fact that everyone’s knowledge of these pop culture references will vary, the new optional rule presented in this expansion allows a player who doesn’t know what their word or phrase is to pick any clue on that card instead of having to stick with the die roll result.

This is a welcome addition to the game as you probably don’t want anyone trying to figure out how to draw the phrase “I pity the fool.” if they have no clue who Mr. T is.

While this expansion isn’t specifically published and designed to work with Telestrations Upside Drawn (the funky team based version of Telestrations you can read more about here) it’s pretty easy to come up with a hack that works.

Should you pick up the Telestrations 80s and 90s Expansion Pack? 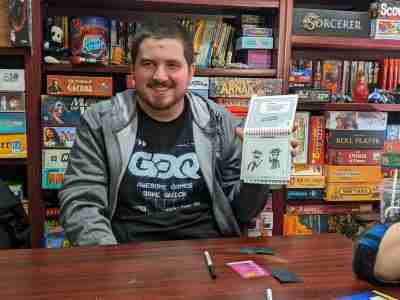 As a child of the 70s, who was a kid in the 80s, and went through my teen years in the 90s, I loved the new words and phrases added with the Telestrations 80s & 90s Expansion pack.

As you can see in our unboxing, even reading off the first card from the box I was smiling and happy with what I saw. Whoever picked these words and phrases did a great job on their selection.

That said, I’m glad this expansion included the new optional rule for picking words and phrases. Even with living through both of the decades featured on these new cards, there were some clues that I didn’t recognize. So I really like the fact that there’s an official rule for skipping the ones that baffle me and picking a different word or phrase.

The one potential problem with this expansion pack came up when I decided to see how it would work with my kids.

Before playing with this expansion for the first time I was thinking that, due to the nature of Telestrations itself, my kids should be able to play with these new cards even if they didn’t understand many of the references. I thought that my girls could surely come up with a drawing for whatever the cards said without actually knowing the specific reference on the cards. 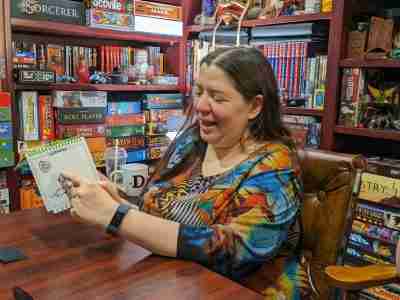 This didn’t play out as well as I hoped. While it can be pretty easy to draw something for Clerks or Clueless even if you didn’t know those were both movies, it’s harder to come up with a drawing of U2 or Air Jordans if you don’t know what those are.

That said, the target market for this 80s and 90s Expansion for Telestrations is people familiar with the two decades featured in it. So I don’t really consider this “problem” to be a knock against this expansion, but it is something to be aware of.

One other really minor issue with this expansion is figuring out how to store it. Unfortunately, the new cards are not going to fit in the cardholders that come with any of the currently in print versions of Telestrations, nor is there a good place to store this expansion pack box in the original game box.

If you have the Telestrations 12 Player Party Pack you can almost fit all of these new cards where the six-hundred word bonus pack was when you first opened the party pack. It’s just the new rule cards that don’t really fit, but they can go under the books or get tucked into the rules.

Overall, I love this small, cheap, expansion for Telestrations. It adds some really fantastic 80s and 90s themed words and phrases to a game I already know and love. 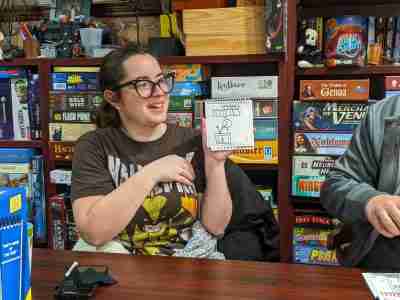 As a Telestrations fan, and as someone who lived through the two decades highlighted in this expansion, I am extremely happy with the Telestrations 80s & 90s Expansion Pack.

Any Telestrations fan that’s old enough to remember the 80s and 90s should pick up this expansion pack. I truly don’t see any reason why you shouldn’t.

If you, or your game group, is younger, that’s where I might hesitate in picking this expansion up. The clues here can be really specific and while there’s a useful optional rule to help people who may not get all of the references, the younger a gamer is the more chance there is that they won’t recognize any of the clues on a card.

If by some chance you haven’t heard of Telestrations, you can learn more about one of my favourite party games of all time in my Telestrations 12 Player Party Pack review. You can also check out my Telestrations Upside Drawn review for a look at a somewhat different take on Telestrations where you play in teams and one player holds the pen and guesses while their teammate moves the board.