Telestrations is one of my favourite party games of all time, so when I got a chance to review Telestrations Upside Drawn, a new team-based version of Telestrations from The Op, I couldn’t resist.

The unique twist in this new version of Telestrations is that one player, The Guide, is manipulating a dry erase board while The Artist is the one holding the marker and also trying to guess what is being drawn.

Disclosure:  I received a review copy of this game from The Op, no other compensation was provided. Some links in this post are affiliate links. Using these links doesn’t cost you anything extra and it helps support this blog and podcast. As an Amazon Affiliate, I earn from qualifying purchases.

What do you get with a copy of Telestrations Upside Drawn from The Op?

Telestrations Upside Drawn was designed by Kane Klenko and published by The Op in 2020. This drawing game plays with four to twelve players, broken up into two to four teams. While Board Game Geek lists the playtime as twenty minutes we have found games go much longer than that and usually give up after about an hour of playing without having hit the official end game goal stated in the rules.

For a look at what you get with a copy of this party game check out our Telestrations Upside Drawn unboxing video on YouTube.

This new version of Telestratoins comes in a medium-sized box that contains a decent plastic box insert and all you need to play the game.

The instructions are short and sweet, lasting only four pages — all of which feature large text and lots of examples. This is one game where you can pretty much start playing immediately, right out of the box, without having to read the instructions ahead of time.

Each copy of Upside Drawn comes with four double-sided dry erase drawing boards. Besides featuring a large drawing area, these boards have a set of categories pictured along one sidebar and some hint icons along the other sidebar. Each board has a yellow and a blue side, both sides are otherwise identical.

The scoring tokens come pre-punched, another aspect of this game that means you can get it to the table right away with almost no prep-work. The tokens come in denominations of one, three and five and are decent thickness. 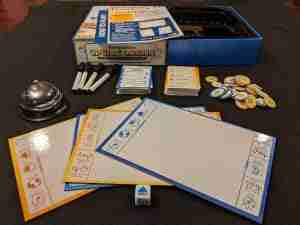 There is also a six-sided die which features six different symbols on it. Five of these symbols correspond to the five different categories of clues (People, Place, Thing, Action and Phrase), plus there’s a sixth wildcard star.

The clues themselves are on cards. The game includes one hundred cards, each of which is two-sided and contains five different categories. This gives you a total of a thousand different words and phrases to draw.

Finally, the game comes with four dry erase markers. These are nice fine-tipped black markers that also include erasers.

To start a game of Telestrations Upside Drawn players first must split into teams. Each team can have two or three members. During each round of the game, one player (The Guide) will be moving the drawing board and saying only the words “up” and “down”, another player (The Artist) will be holding a marker and following The Guide’s orders as well as trying to guess the clue, the third player, if any, will also be trying to guess the clue. 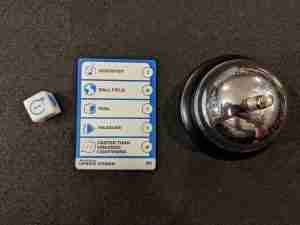 Once teams are in a position someone rolls the category die and then a clue card is passed to each of the guides who each look to see what they will be trying to get their artist to draw. If a wildcard is rolled the player gets to choose a category of their choice before they see the clue card. The category for this round is circled on each team’s drawing board so that the players guessing get a reminder of what kind of word or phrase they are looking for.

Once everyone is ready someone says “Ready Set Draw!” and the round begins. 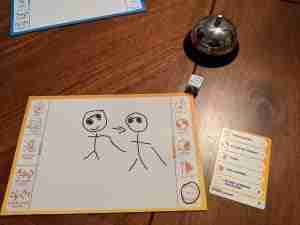 While drawing the guide is moving the board while the artist is holding the marker and also trying to guess the clue. The only thing the guide can say is “up” or “down”, causing the artist to either raise or lower the marker on or off of the board. In addition, the guide can also use the hints on the side of the board to help the guesser (or guessers, if you’re playing with a three-person team). These hints include “Hot”, “Cold”, “Sounds Like”, “Narrower Scope” and “Broader Scope”.

The first team to correctly guess the clue wins the round and gets a number of points based on the difficulty of the word as indicated on the clue card. The game continues round after round until one team reaches twenty points. 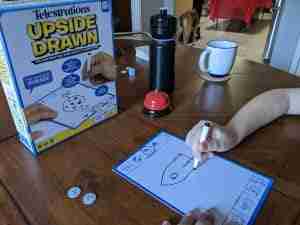 I am a bit sad to report that this game is really Telestrations in name only. This game has none of the Telephone-based gameplay of the original and is more like traditional drawing party games such as Pictionary. What I am very happy to report is that Telestrations Upside Drawn brings something totally new to the drawing party game genre through its unique method of team-based play.

The most brilliant thing about Telestrations Upside Drawn is the system where one player is manipulating the drawing board while it’s another player who is both holding the marker and trying to guess. This is where all the fun is in this version of Telestrations. Not only are players forced into the unfamiliar action of drawing by moving the paper instead of the pen, but they are also drawing upside down.

What we have found is that this method of drawing really levels the playing field in a rather hilarious way. This unique drawing method means that players who are normally expert artists are pretty much on the same level as people who can barely draw a stick figure. 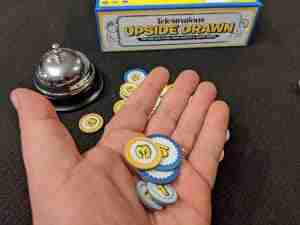 Similar to the original game one of the things that we did not love was the scoring system. First off, I’m not sure who assigned the point values to the clues but we found ourselves saying “That’s only worth ONE??!” a number of times. Added to that is the fact that a full game is meant to go to twenty points. Getting to twenty points would take forever! I’m not sure how you are expected to get to twenty points in the twenty minutes listed on the box when most clues are only worth one point each. That would mean that the same team would have to win a round every minute to fit that playtime and that’s just not going to happen.

For our games, we usually house ruled it and either stopped playing after a time limit was reached or once one team got to a lower point total with ten seeming like a good total for about an hour’s worth of play.

There was one other aspect of the game we ended up house ruling and that is the use of hints. Following the rules as written, you are required as the guide to say “up” then move the board so that the artist’s marker is over the hint you want and then say “down” then “up” again to indicate a hint. This takes quite a bit of time and some skill and we found that most of the time that the guesser is so busy trying to watch where the board is moving that they forget what the hint was in regards to in the first place.  The house rule that we came up with was to allow the guide to just tap these hint icons with a finger.

It’s interesting to note that many groups, ourselves included, also added house rules to the original Telestrations game, mostly in regards to the scoring system. 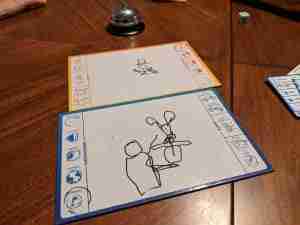 Despite these minor and easily fixed complaints,  Telestrations Upside Drawn is quite fun. The most enjoyable aspect being at the end of the round where each team shares what they have drawn and you get to see what other the other team has done with the same clue your team was working on. This again reminds me of the original Telestrations and flipping through each book.

Overall we had quite a bit of fun with Telestrations Upside Drawn. I do like that its a team-based game and I think Kane Klinko came up with a brilliant way to do a team-based drawing game with the whole Guide and Artist system. We found it to be a lot more fun than it sounds, with the unique drawing mechanics working to put players with different artistic abilities on a more level playing field. There’s a very enjoyable party game in this box and it’s one I’m glad I own.

There are a number of drawing based tabletop games out there. Telestrations Upside Drawn does something totally new in the genre and that’s great to see. I love seeing new innovations in gaming! What is your favourite drawing based party game? Let us know in the comments.