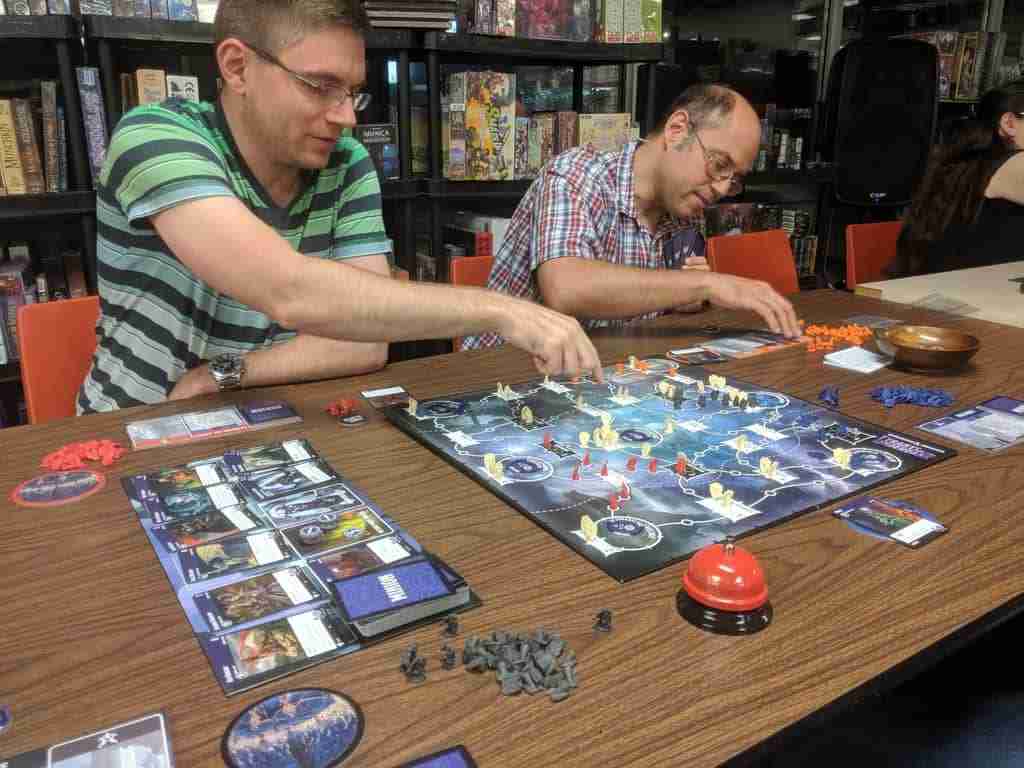 Have you ever skipped over a board game for some reason only to hear everyone else say that the game is amazing, so you finally decide to check it out years later and find out that they were right? That’s what has happened to me with the Dungeons & Dragons themed deck-building game Tyrants of the Underdark.

This past weekend I finally got to try Tyrants of the Underdark and today I’m going to share my thoughts so far on this card game.

Disclosure: Some links in this post are affiliate links. I took home a review copy of Tyrants of the Underdark from Gale Force 9 from Origins. No other compensation was provided.

Why I skipped over Tyrants of the Underdark from Gale Force 9 for years:

was released by Gale Force 9 in 2016. I don’t remember if the game was premiered at Origins 2016 but I do know that it was a big deal that they were showing it off at that game convention. I was one of the many people that were really excited to check out this new Dungeons & Dragons deck-building game set in the Underdark, pitting Drow families against each other. 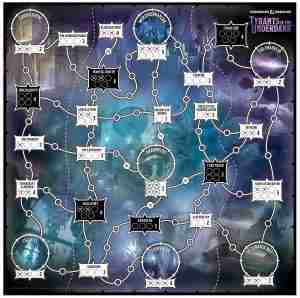 Both Deanna and I made a point to find time to check out the game and try to get in a demo. Then we saw the game.

The first time we saw Tyrants of the Underdark it was in a glass case outside the Gale Force 9 booth and I have to say I was not impressed. Here we found a dull dark board, so dull you could barely tell what the art on it was depicting. On it were thick bright lines of white connecting boxes of white and black. There were a few circles of white as well with more dull art inside them. All over this map were small shields in unusual player colours, dull blue, dark red, grey, bright orange and bright white.

The overall impression was a wargame, and an older wargame at that. It felt like I was looking at a variant Risk map from the late 80s or early 90s. I immediately lost interest in even trying the game.

Later on that weekend we managed to stop by a demo game and watched some people play for a few minutes. This short glimpse of the game just reaffirmed my opinion. What I watched was players playing cards to eliminate units off the board and replace them with their own units, players move spy miniatures around the board, and place new shields out onto the board expanding their territory. At the time, all I saw was a folk on a map, area control board game and I couldn’t have cared less.

Since that time I have heard many people say that I should have given the game more of a chance. I know people online that consider it the best deck-builder out there. Every time I share a deal on this game through Tabletop Gaming Deals on Twitter someone points out how much they love it.

Fast forward to Origins Game Fair 2019. Here I approached Gale Force 9 and asked if they would be willing to give me a copy of Tyrants of the Underdark to review as I was really curious if my initial impressions were that far off. They agreed, I bought the game home, and I finally got the game to the table this past weekend. 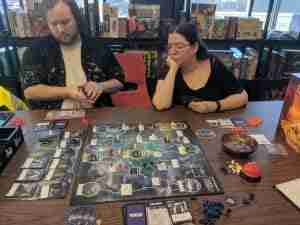 for the first time. During the event, I played the game twice, once with three players and once with the maximum player count of four. Each game was with a different set of players. Please realize that this review is based on only these two plays. I plan on doing up a full review at some point, once I’ve played the games a few more times and have tried it with only two players.

In Tyrants of the Underdark, players are each playing the head of a Drow (Dark Elf) Household. Your goal is to accumulate power through control of the Underdark, the vast series of dungeons, lairs and cities underneath the lands of The Forgotten Realms. This is done through a mash-up of deck-building and folk on a map, area majority gameplay.

Like pretty much every deck-builder out there players start off with the same starting deck. In this case a mix of soldiers that provide power and nobles that provide influence. Influence is used to buy new cards from the market. Each game the market is created by taking two “half-decks” and shuffling them together. The base game comes with four of these half-decks, representing Drow, Dragons, Elementals and Demons. In the games we played, we tried the Drow, Dragon and Demon Decks. The first game being Demons and Dragons and the second being Drow and Dragons. 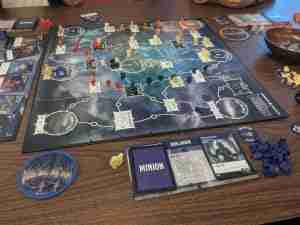 Power is the other currency in this game and power is all about playing the board game elements of Tyrants of the Underdark. Power lets players place troops on the board, eliminate enemy troops through assassination and remove enemy spies. The map represents a bunch of Underdark sites and these are connected by pathways. On many of the sites and pathways there are Neutral troops (white shields). Each of the sites is worth points at the end of the game for the player who controls the site (has the most units in it). There are also bonus points for having complete control of a site (owning every spot at a site).

Along with these, there are a number of other actions that only come into play through cards bought from the market. You can place Spies onto sites on the board. This gives you presence in the area allowing you to use your power in that area of the map. Spies also prevent complete control of a site. Cards can be Devoured and thus removed from the game. Then there is the very interesting ability to Promote your troops.

Promoting troops is very similar to Chambering a Maid in Tanto Cuore and this is only the second deck-building game I’ve seen that uses this mechanic. When you Promote a card you take it out of your deck and place it into your Inner Circle, a special spot in your playing area. Cards in your Inner Circle can no longer be used but every single card in the game is worth more victory points at the end of the game if it’s in your Inner Circle.

I think that’s a good overview of the game. I’ll save a more detailed walkthrough for when I publish a full review. 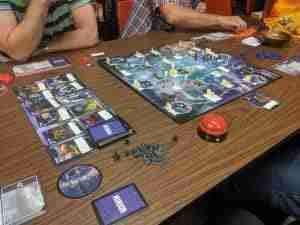 . The map is just boring and doesn’t really evoke any feeling of the Underdark for me. The map lines are so thick and bright they take over. Which I guess is a good thing for functionality but it just looks so blah. The units players play on the map don’t help either. While you do get five awesome little mini Drow miniatures for the Spies the rest of the troops are just these small shields that have a hard time standing up. Due to how often they fall over during play I think I would have actually been happier with wooden cubes. I still think this game has terrible table presence.

That said, everything else about Tyrants of the Underdark is fantastic. Thankfully the art on the cards isn’t as drab as the artwork on the board. The cards are filled with all kinds of awesome Dungeons & Dragons artwork and flavour text. Every single card has some little bit of fluff on it and I dig that for a D&D themed game. Speaking of fluff and background, half of the rulebook is background info on the Drow,  the Underdark, and the sites you are fighting over during the game.

The actual deck-building aspect of this game is expertly done. The cards seemed extremely well balanced, with even low cost cards being very useful. This is one of the few deck builders where if I have a choice between buying a 6 cost card and two 3 cost cards I actually have to think about it as both could be just as useful. I also love the ability to Promote your cards. That was one of my favourite parts of Tanto Cuore and I was very happy to see that mechanic used in another game. I also liked how different each of the half-decks felt in play. 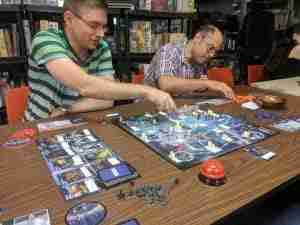 Which leaves the area majority wargame element of Tyrants of the Underdark, the part I thought I would like the least. Looking back to 2016 it ends up I was wrong. This is not just another boring folk on a map game. While the board in Tyrants of the Underdark may look a bit like something from Risk it has some features that set it apart. For one, it’s an area majority game not an area control game. Multiple factions can be at the same location at once each vying for control, with any player getting complete control earning bonus points.

Another diversion from many standard area majority games is how Presence works on the map and the power of spies due to this mechanic. Similar to most wargames you can only place troops in an area where you have troops or next to an area where you have troops. At the beginning of the game, this means spreading out from a starting location, but that changes once you get a card that lets you put spies on the board. A spy can be placed anywhere, and once you place a spy you now have Presence at that site and any connecting spaces. This lets you make inroads to another area of the board that isn’t connected to your home base. I found this to be very strategically and tactically important and also very thematic

At this point, after two plays, this is my favourite implementation of a board game/deck-building hybrid.

While Tyrants of the Underdark may not look like much, I’m pleased to say it’s a really solid game. It does some really great stuff mashing together a very solid deck-building element with a near traditional folk on a map wargame all while doing a great job of sticking to the D&D Drow theme. I am very impressed by this game and strongly suggest that you don’t let the look of the board fool you. If you’ve been passing this one over, give it a shot.

We also discussed this review on our live show. You can watch this Tyrants of the Underdark review on YouTube. 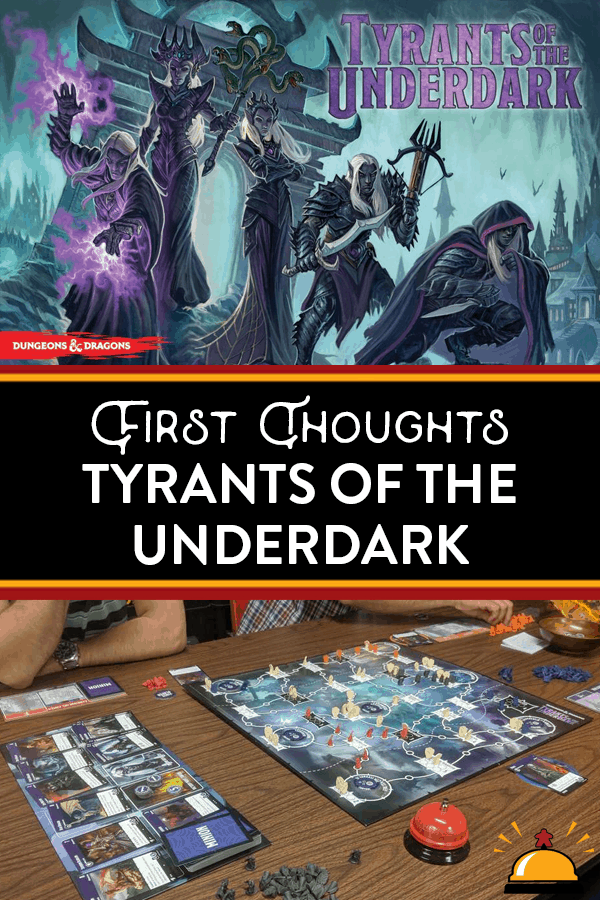