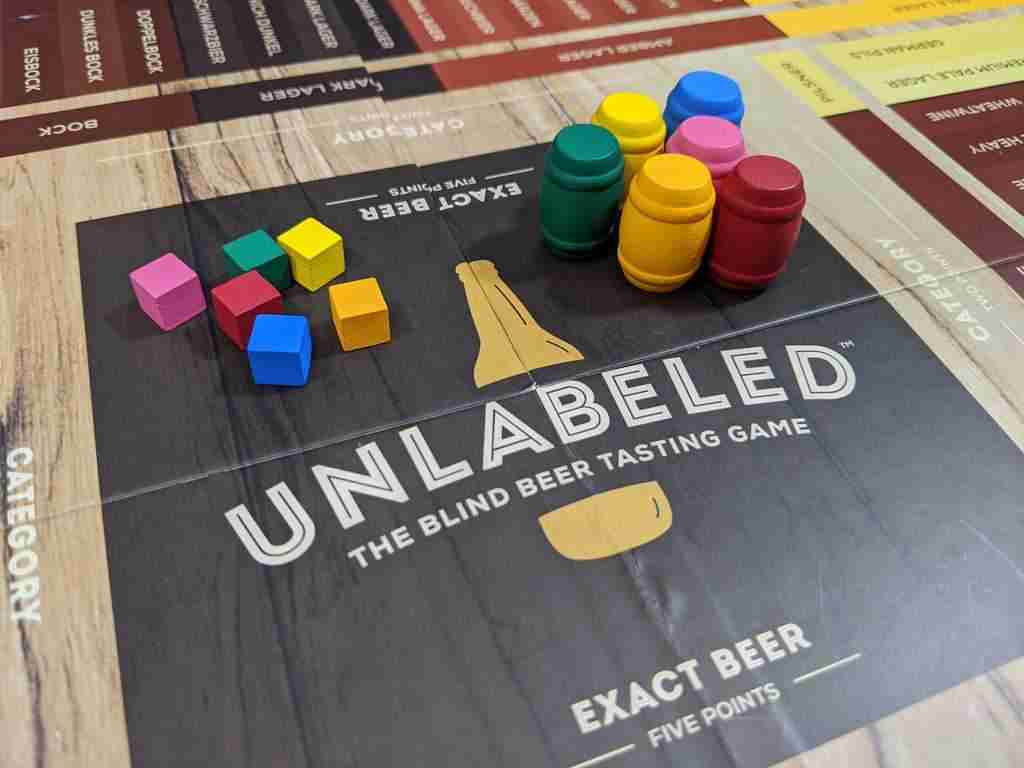 Everyone reading this blog knows I love board games, what you may not know is that I also love beer. Specifically, craft beer. So when Unlabeled, a board game about beer tasting, launched on Kickstarter in  2017 I jumped at the chance to back it.

Unlabeled lets me combine my love of beer with my love of boardgaming. It’s a fun way to gamify a night of beer tasting with your friends, either at home or at the pub or a brewery.

What is Unlabeled The Blind Beer Tasting Game?

Unlabeled: The Blind Beer Tasting Game was designed and self-published by Nathan Straathof. The design work is uncredited and as far as I know, was done by Nathan himself. It was originally launched on Kickstarter in June of 2017. I got my copy in January of 2018, unfortunately just a bit late for our Gaming in the New Year party that year.

Back then I wasn’t doing this whole Bellhop Thing full time, so there’s no unboxing video for me to share with you for this one.

Unlabelled comes in a thin square box that doesn’t have a whole lot in it.

There’s a large game board that has a ton of information on it. Two edges list ABV (Alcohol By Volume) level and fermentation types. Then there is a square ring of specific beer styles all colour coded based on the usual colour of beers of that style. These are broken into similarly colour-coded sections listing more general beer styles. Finally, there’s a large square in the middle of the board with the Unlabelled logo.

The board is on top of a cardboard box insert that serves only to hold the board over the top of the other components. This insert contains a baggie containing wooden barrels and cubes in six different player colours. 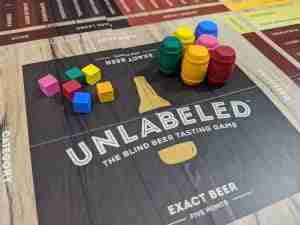 Next, we find the Unlabeled Rulebook which features muted colours that are almost black and white (an odd choice). The actual rules are only two pages long. There’s then a half-page FAQ that is mostly about running beer tasting events and not the rules for this specific game. Some rule variants are also presented. The second half of the book is a Beer Style Guide, listing a number of beers, and where they would score on the Unlabeled board.

Finally, there’s a beer flight sheet meant to be given to a server when playing the game at a bar. Oddly the game did not include the tasting sheets noted in the variant rules, those you have to go online to download.

How to improve your beer tasting night with Unlabeled:

To play a game of Unlabeled each player needs to show up to game night with two beers. The identities of these beers must remain hidden from the other players. Each round one of the players acts as beer host and pours each player a taster of one of their beers. 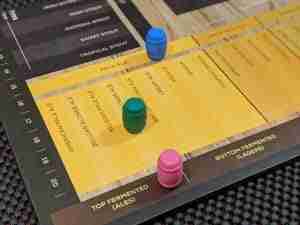 The players each taste the beer (drinking it is optional) and then look at the Unlabeled board and place a bet on what they think they know about the beer. There are four scoring areas, each requiring players to be more accurate in their beer assessment and awarding more points if correct.

Players place their bets using their coloured barrel. After everyone has placed, points are awarded. If a player is correct in their bet they get full points for the area they placed in. If a player has the wrong Beer Style but their barrel is in the right Beer Category they score one point. All other players score zero points.

Points are tracked on the side of the board using the coloured wooden cubes.

The game continues with the host rotating each round until all of the beers have been tasted.

That’s it for the basic game. 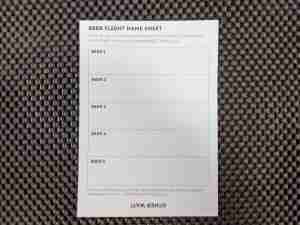 The rulebook presents some alternatives to these rules. Like playing at a bar where you hand the server one of the included flight sheets and they write down which beers are which but don’t reveal that to the players until after each round is completed. This way everyone can play at once.

There are also rules for using tasting sheets while playing (which need to be downloaded online). These allow you to make multiple guesses and you can award points for each section of the board the player gets correct (this is our preferred way to play).

For true beer snobs, there is also Elimination mode. Where the first round players place bets only using the one point areas. The second round uses the two-point areas, etc. At any point, if a player gives a wrong guess they are eliminated. 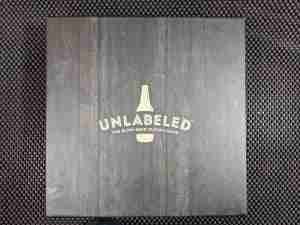 Right from the start, I will say I expected a bit more than what I got with Unlabeled. In many ways, this game is exactly what I was expecting it to be, yet somehow it just isn’t quite what I wanted. I have had fun playing it and to be honest if I’m home and going to be rating beers, I don’t see why I wouldn’t pull this game out at the same time.

The component quality is excellent. The box fits on my shelf well. The playing board is clear and a good thickness. The wooden barrels are a nice touch. No complaints there. The price point is pretty reasonable for what you get.

One thing you have to realize about Unlabeled is that this is definitely more of an activity than a game. Unlabeled is something you do while hanging out with friends tasting beers. It’s something to enhance a gathering and not something that can or should be the focus of that gathering. You get your friends together to hang out and have some beers and you happen to be playing Unlabeled when you do this, you don’t call up your friends and plan an Unlabeled game night. 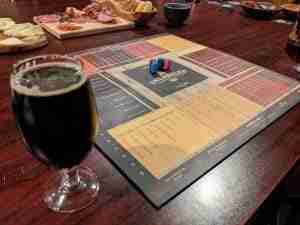 I found the default game rules to be rather uninteresting. The fact that each player only gets one bet per beer each round is very limiting. It makes it into an all or nothing proposition in most cases and that encourages players to play conservatively. Even if a player is pretty sure they know the exact beer they are drinking they are most likely going to bet on the Type or Category instead of taking the very high chance of scoring 0.

The best way to fix this is to use the optional rules for doing a full tasting. The problem with this is that the tools to do this aren’t even included in the box. This was something that was added to the campaign as part of the Kickstarter thanks to people like me who suggested it during the project. The problem is they added this as a variant in the rulebook alone, not in the components. 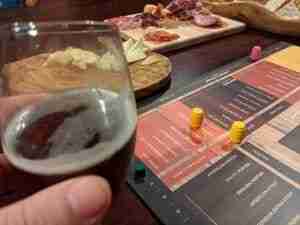 What we have done to house rule this is to give each player multiple barrels to bet with. With two players we just take turns using all the barrels in the game but with more, you will need to grab something else to mark each player’s bets.

Once you start rewarding players for each of the different categories the game becomes much more fun and engaging.

Even doing this, we still found Unlabeled could use some more work. The biggest omission in this game is the fact there is no place to bet on IBUs or International Bitterness Units. IBUs are a huge part of beer tasting and one of the main factors that some beer fans consider when buying and brewing beers. To me this is a bigger factor in beer tasting than the fermentation type and even the ABV.

Here again, we have house ruled in IBUs when we play Unlabeled. We just use the score track and use each number as a range where a 2 on the track represents IBUs of 11-20 whereas 6 would be 51 to 60 IBS. 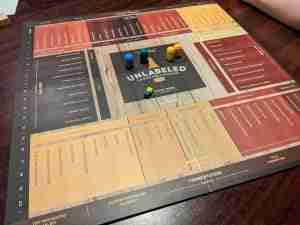 The final issue we’ve found with Unlabeled is the list of beer categories and styles seems to be lacking. Every time we sit down to play this game we find one or two beers a night that we can’t properly categorize based on the board that comes with this game. Omissions like having no Chocolate or Milk Stout Categories make me wonder where they got their list of categories from.

Despite all of these flaws, I do have to say we have had a lot of fun playing Unlabeled as part of a get-together. Even the basic rules do add something to a night of tasting beers. If nothing else it’s great for getting everyone’s attention focused on the beers and talking about them. 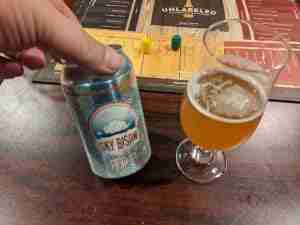 While I wanted more from Unlabeled we did find ways to make it more fun and more engaging, it’s just sad that some of these house rules weren’t in the game by default.

If you are a beer fan and know other beer fans I do strongly suggest you pick up a copy of Unlabeled. It’s a great addition to a tasting night, even if it may not be perfect. I do also suggest you consider some of the house rules we’ve added as we have found they make the game quite a bit more fun for everyone (and if you come up with your own house varients I’d love to hear about them).

There’s a big difference between drinking games and games you play while drinking. Unlabeled actually fits under both categories. What are your favourite games to combine with a few adult beverages? We would love to hear about them in the comments!

If you enjoy our content then please consider donating to our Patreon.
Related Posts