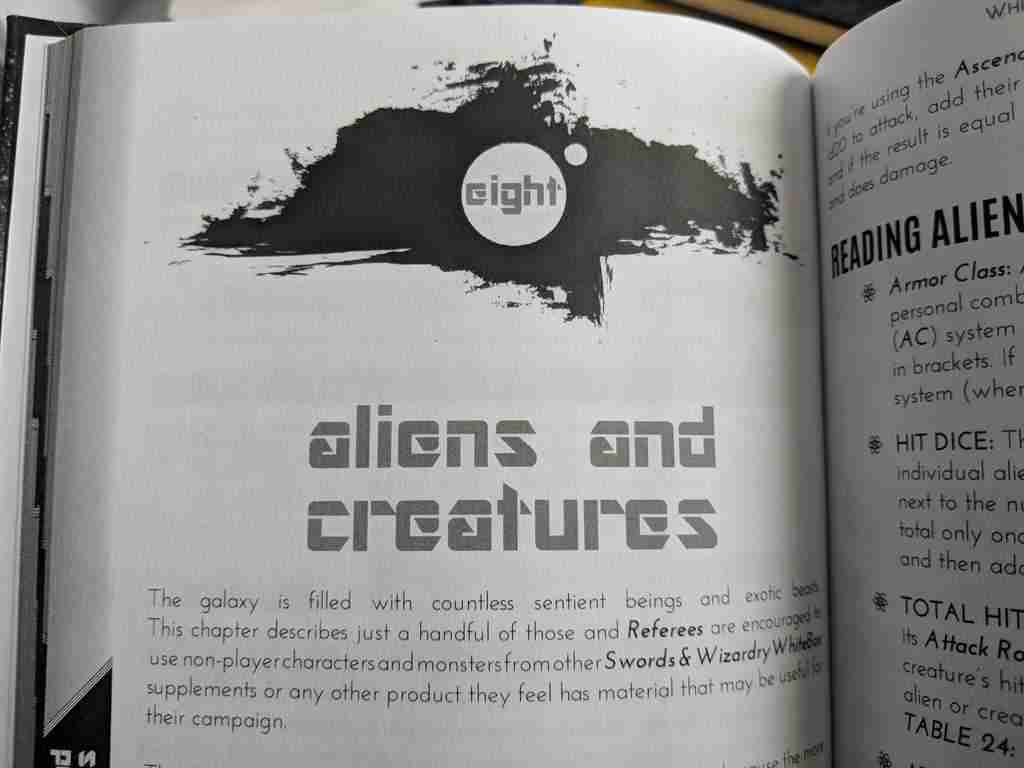 The second part of my detailed chapter by chapter review of White Star White Box Science Fiction Roleplaying. This features the “GM” section of the book and my final thoughts.

Including: Aliens and Creatures, Advanced Equipment, The White Star Campaign, Interstellar Civil War and Kelron Sector, The Second Battle of Brinn and my personal opinion on this book.

Disclosure: Some links below are affiliate links. Using these links costs you nothing extra and helps us keep creating content like this review As an Amazon Associate, I earn from qualifying purchases.

Be sure to read through the first part of this two-part White Star Review before continuing.

No old-school RPG would be complete without a bestiary and that’s what we have in chapter eight of White Star.

This chapter was a fun read. It starts with an intro that notes that all creatures only have vague descriptions. It notes that this is for the player’s imagination’s sake but I personally think some of it is for copyright sake 😀

The most fun part of reading this chapter was trying to figure out what sci-fi creature each entry here was based on. Assimilants are obviously Borg, Uttins are Jawa but I’m not sure what a Spider-Fly is based on. The full range of sci-fi tropes is well represented here.

I was pleased to see the rules for “levelling up” baddies. so that you can have the Assimilants Queen or a Uttin master trader.

Remember White Star is based on old-school fantasy RPGs and we’ve already seen the magic and monster section. What’s missing? That’s right Magic Items! That’s what we have here, the White Star Equivalent of Magic Items.

What’s great about this section is that it’s not just +1 Blasters and +4 Powered Armour. Yes, there are standard +1 style items but most of the things listed here are unique items with full descriptions. Many have charges and some of them can be recharged. Cybernetics can also be found here. I like the way they are treated and I appreciate the Steve Austin reference. 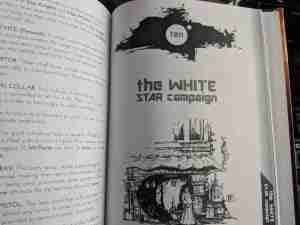 This is a very short chapter that basically points out that this rule system can be used to play a wide variety of sci-fi games. Again we find the expected popular settings with the serial numbers filed off (covered with a bit of dirt in at least one case, Just Keep Flying anyone?).

One interesting note is made here that I had not thought of. Because this game is based on Swords & Wizardry White Box it is therefore 100% compatible with that ruleset. This means you can easily use parts of White Star in your fantasy campaign and you could run a full White Box adventure using White Star characters. Also, remember that Swords & Wizardry White Box is based on OD&D, so those modules should also be compatible.

Next, we find a sample campaign setting. Despite the name: Interstellar Civil war, this isn’t just a re-skinned Star Wars. Okay maybe just a bit, but not as much as the name implies. The setting gives you one sector of space with plenty of stuff going on to keep any group busy for years. There are 12 different planets each has full, rules free, write up.

That’s worth noting. There are no rules here, not even stats for the NPCs. This is all up to the Referee to determine before (or I guess during) play.

The Second Battle of Brinn

This is a White Star Adventure for 6 – 8 characters of 1st to 3rd level.

I’ve mentioned it before in these #RPGaMonth reviews. I love sample adventures. To me, they are a glimpse into the designer’s world and they show a new GM and group what the system is designed to do.

This is a solid adventure. A full 16 pages (perhaps the largest section of the book. I didn’t count). It’s set in the Kelron Sector using the information from the previous chapter. The Second Battle of Brinn is basically a sci-fi dungeon crawl. Which make sense to me given the game’s roots.

I don’t want to spoil anything here, but you get everything you need. A keyed map, boxed text, NPC stats, lots of different ways the players can go and hints on how to handle when things go off track. There were a couple bits that worried me that they could be dead ends, the type where if players miss something they can’t progress but I think anyone running this game (or reading this review) probably has enough games under their belt that they would know what to do in these situations.

The book ends with a two-page character sheet.

Wait, did we miss something? 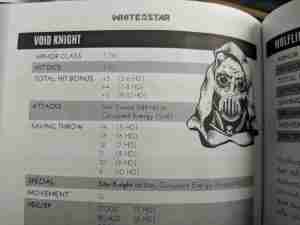 One thing really struck me having now finished the book. Where are the non-combat rules? Now I know OD&D and Swords & Wizardry don’t have skills or proficiencies, and I fully expected that White Star would be the same. But what about Saving Throws and Stat Checks for things outside of combat? What about rolling STR to force a door open. What about a CHA check to sway the lazy guard to your side, with a +1 bonus for a few credits? What about the saving throw to jump out of the way as the EIT Fighter slips from it’s moorings and crashes to the ground near the group? None of this can be found in the pages of White Star.

When I got to the adventure in the back of the book I thought: It’s got to be in here. Somewhere there’s going to be a DEX check to hotwire a landspeeder or something? Nope. But there was something, something different.

In a couple of places in the book, they have a character who tries something roll 1D6. Then there a set chance (usually 1 in 6) that they can do some unique thing. Open a locked door, find a hidden item, etc. In each case, if one of the players was playing the right character class this roll would get a bonus or would be made automatically.

This made me think that stat checks weren’t missed, but rather intentionally omitted from the rules. This still seems like an odd choice to me.

Another impact of this is that the stats don’t seem all that useful then. If you have a really high stat in the right spot you get more XP and maybe a class bonus. But if you aren’t a Mercenary or Alien Brute, it doesn’t really matter what your STR is does it? Even if you have an STR bonus of -1. I don’t see anything that -1 would actually apply to.

All that said: this is an OSR game and the designer himself spends a good bit at the beginning of the book telling you to hack and do what you want with it. So there’s no reason at all you can’t toss in roll under stat checks. Or target number based checks adding the stat bonus or your preferred system of choice. 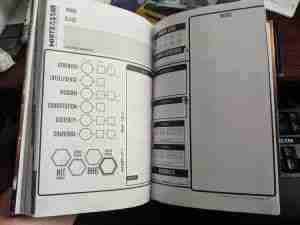 I really enjoyed reading White Star. It flew by. Which was a nice change after Trail of Cthulhu. This isn’t just because it’s a shorter book either. It was just an easier read. Simpler rules (way simpler rules), more interesting subject matter (to me), and even the monster and items sections that usually bog me down were nice and short and never got boring.

Regarding the system itself, this is about as rules-light a D20 system as you can get while still considering it a trad, (slightly) crunchy D&D style game. D20 to do something (or avoid something being done to you), and if there’s damage 1D6. Those are the only two dice you need. There’s only a handful of classes and each has neat cool stuff they can do but not a ton of it. The combat system is just as simple and sounds lighting fast.

Added to this is a ton of interesting house rules. I liked seeing these throughout the book both as great ideas to add to the game and as things to inspire a referee to come up with their own ways to customize the system. I did find the lack of resolution rules for anything but combat a bit odd, but it does seem it was intentional.

Probably the best thing I can say about White Star is I really want to run it with a group right now!

Before you rush out and buy it…

I really want to end this review with: go buy this game right now! But, I’m not going to do that. That’s because there’s supposedly a better version.

This also got great reviews. Along with those came a ton of feedback. Well, James took that feedback and took both the Companion and the Core book I reviewed here, combined them, added in some new stuff and released: White Star Galaxy Edition

So I’m told that if you really want to check out and play White Star that the best entry point is now the Galaxy Edition.

Now I haven’t read the White Star Galaxy Edition yet, so all I can tell you right now is that I really dig the original core rulebook.