A Look at the Miniature Based Board Game Zombicide: Invader from CMON – Review 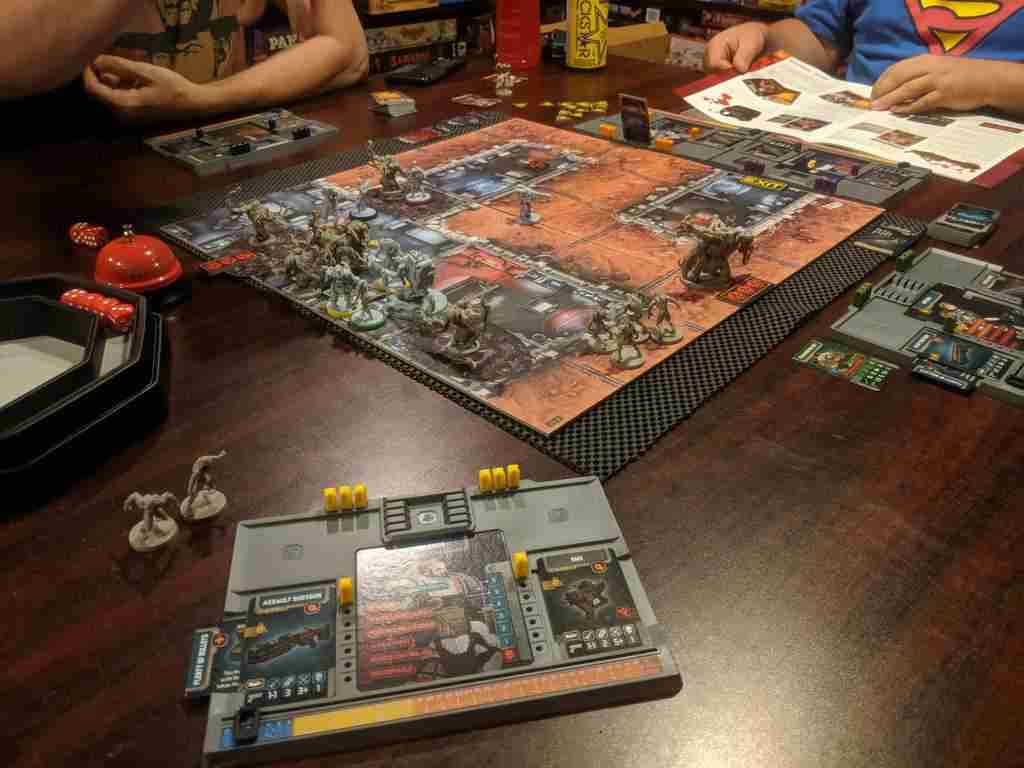 The big game that hit my table this week was my friend’s copy of Zombicide: Invader the cooperative board game from CMON.

My friend Mike recently got this game in from Kickstarter and after giving me a chance to record an unboxing video he taught a group of four of us how to play. Here are my thoughts on the game after that one play.

Disclosure: Some links in this post are affiliate links. Using these links cost you nothing, but gives us a small kick back which helps support this blog and our other content.

Zombicide: Invader from CMON is a cool new edition to this miniature based cooperative game franchise. 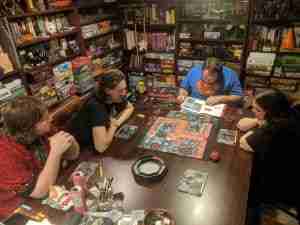 Last week my friend Mike lent me his copy of Zombicide: Invader

that he had just gotten in from Kickstarter. He gave it to me so that I could record an unboxing video. When you’ve got a chance you should check out that video. It took me over an hour and a half to unbox everything because there’s just so much stuff.  Seriously, Mike got a crazy amount of boxes and miniatures from this Kickstarter.

Monday night Mike came over along with Sean Hamilton (not Sean from Hamilton) and another member of my home group, Tom. Together with Deanna, we played through the first scenario in the Zombicide: Invader Core Box

First off, as you can see in the unboxing video, this game has some of the best looking, most detailed sci-fi miniatures I’ve ever seen. Both the player character minis and the aliens are great looking. Though I did find something really odd about them. 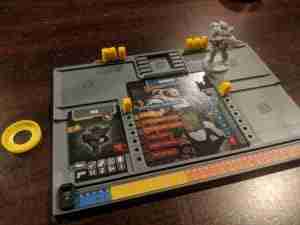 When you start playing you each pick a character, there are six included in the base game (and a ridiculous number more in with all of the Kickstarter add-ons and stretch goals). You then distribute starting items. These include four cattle prods and two submachine guns. No big guns and no armor. What I found odd about this is that the miniatures are all much better equipped than any starting character. I found this a bit odd. The miniatures represent badass space marines and scientists all geared up and ready to fight and that’s not really what you are playing in the game. The actual survivors you are playing barely have anything.

Setup was pretty quick. The map tiles look great and looked even better once we tossed a ton of miniatures out on the board. Right away though we ran into a slight problem, we couldn’t fit all of our starting characters into the first room. We double checked the rules and there’s no limit to the number of minis that can be in one space, so it seems the board tiles are a bit smaller than required. 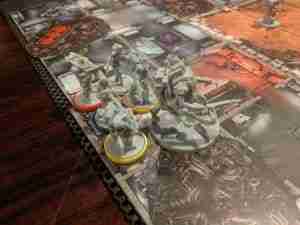 One other complaint before I move on to some more positive thoughts. I don’t know what the cards in this game are coated with but they are some of the slipperiest cards I’ve ever handled. These card decks are harder to use than a stack of sleeved cards. The equipment stack fell over a couple of times during our game because of this. If this were my game I would be tempted to sleeve them in hopes of making the stacks more stable, which is usually the opposite of what happens when you sleeve cards.

Once we started playing, I was surprised to learn just how much like other Zombicide games Invader really is. I knew the basic mechanics would be the same but I didn’t expect things like the four types of Xenos in Invader to exactly match the types of Zombies in the previous games. There’s a worker who’s generic and moves once. There’s a hunter that gets two actions a turn. There’s the tank that takes two hits to kill and then there’s the Abomination, the big unique Xenos. The rules for these and their stats perfectly match the similar monsters from the other boxed sets. 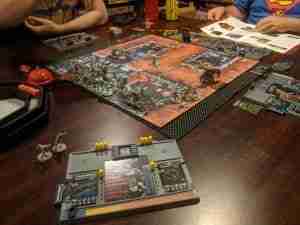 I actually think this is a brilliant way to do things. At first, I expected more but then realized that this meant that once you learned one game you knew how to play the others and it makes it so that the games could be combined if you wished. Not a bad thing at all.

There is some new stuff in Invader. Compared to other Zombicide games you are going to be doing a lot more shooting in Invader. There are a lot more guns in the equipment deck and we found that only one character even bothered with melee weapons at the end. You also have two robots that are with you on every mission and using them is a big part of the strategy in the game. The other big thing is this mould that slowly takes over the board and acts as another Xeno spawn point.  The fact that you never knew exactly where the aliens were going to spawn added a level of tension to the game over previous installments. 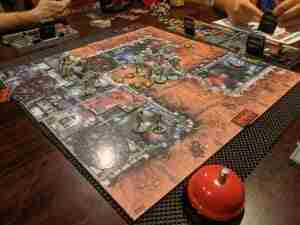 One final significant change is the fact you are playing in Space and that there are indoor and outdoor locations on the maps. To go outdoors you need to first find Oxygen tanks, then when you are actually outdoors it ends up that none of your guns that use hard ammo work, and that’s most of the guns we found. This added a whole new level of planning and strategy to the game and I found it to be a great addition to the Zombicide system.

Unfortunately, the one thing they didn’t fix in Invader is the campaign play. There still is none. Sure you have a series of ten scenarios you can play through, but everyone is a stand alone game. Each scenario you start fresh, at zero level with the same bad starting equipment. As discussed in my What Makes A Campaign Game article, this, to me is not a campaign game in any way and that sucks. This is actually my biggest complaint about the entire Zombicide line of games. I want them all to be true campaign games where I play the same character through a series of scenarios and what I do in one scenario affects the next one.

Overall I enjoyed Zombicide: Invader more than I expected to. I had more fun with it than I had with Zombicide Black Plague, and I liked that version better than the original. There seemed to be more randomness in Invader that made it feel more like an adventure and less of a puzzle, which I liked. I’m looking forward to Mike bringing over his copy again in the coming weeks and maybe checking out some of the crazy amount of additional content he got.

So there you have my thoughts on Zombicide: Invader

, a game that I think is the best Zombicide game to date. Have you played this miniature based cooperative adventure game? What did you think? Let us know in the comments.