You are here: Home / Gaming Advice / Comparison of Three of the Best Sites for Playing Board Games Online For Free – Ask The Bellhop

Today we are talking about the best free ways to play board games online that don’t require you to download anything to play.

This topic comes from Sigurd Langseth who commented on our The Table Sat Empty article all about Board Game Arena.

They wrote, “You should do one of these for Yucata and Boiteajeux too, and do a comparison after doing so.”

Playing board games online is a great way to be able to game with your friends when you can’t get together to play games in person. 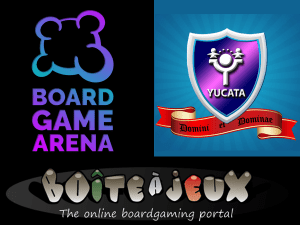 Being able to play board games online still feels fresh and new and honestly quite odd to me. Growing up, if you bought a game and then couldn’t find someone in the neighbourhood to play it with you were out of luck. You could maybe convince your immediate family to play but that was hard if they weren’t into playing tabletop games.

As gaming became more popular, game stores sprouted up. That was great as it meant that there was now somewhere to meet other people who were also into gaming. The good games stores even had a place to play and regular events. Even with this resource, it wasn’t game night every night and you often still couldn’t find people to play with.

With online gaming, you never have this problem. I can hop on any of the three sites I’m going to feature in this article at any time of day or night and find plenty of people to play with. This may include friends I’ve made in person or online or total strangers.

Another advantage of being able to play games online is the ability to play and try games you don’t own without any investment required. Online board game sites are a great place to try before you buy. They are also a good place to refine your skills and practice playing your favourite games.

While digital gaming is never going to replace the joy of a real face to face game for me, I love the fact that there now exists a way for me to play my favourite games, or try out new ones, at any time of the day any day of the week.

What follows is a look at three of the most popular browser based online board game websites. All of these sites are completely free to use (though they do offer additional options and benefits for those who chose to pay) and don’t require any special software or app to use. You just need a browser, which also means that they work cross platform. It doesn’t matter if you are on a PC, an Xbox, a Roku, smart TV or phone, you can access and play games on these sites.

One other important aspect is that all of the games on these sites are being used with the legal permission of the proper rights owners.

Board Game Arena or BGA:

Board Game Arena can be found at https://boardgamearena.com/.  This site features 175 games covering a wide variety of complexity, weight and playtime. Some of the most popular games on BGA include 7 Wonders, 6 Nimmt, Kingomino, and Terra Mystica. 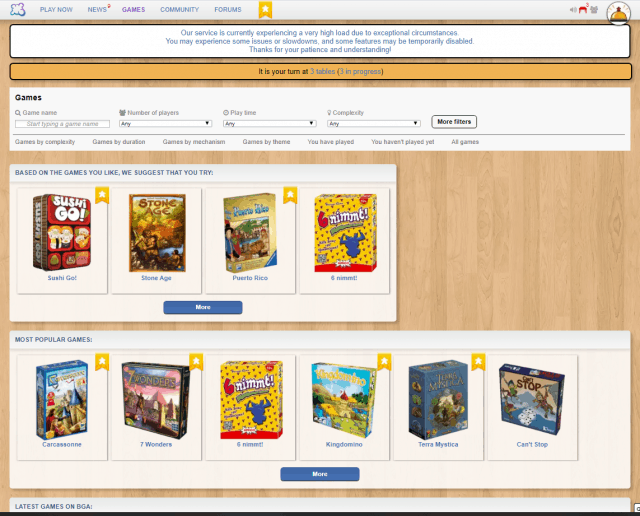 A subscription for Board Game Arena costs $4 a month or $24 a year and provides the following benefits:

I have been an extremely pleased and active member of Board Game Arena for a number of years. I have been a premium member for the majority of that time. The low cost of going premium is a huge benefit and I find it is more than worth it.

Of the three sites, I’m looking at today BGA is the most modern, clean and easy to use. BGA has the best onboarding and is the quickest place to set up and start playing a game right away. Games are all well presented and have a unified feel to them.

My biggest complaint, and the one thing that drives me nuts on BGA, is the fact that there is no confirmation of your moves or undo button. Far too many times, in far too many different games, I have lost a game due to missing a piece of information (due to the site design) and making a bad move because of it or actually clicking on the wrong thing and making a move I didn’t want to. 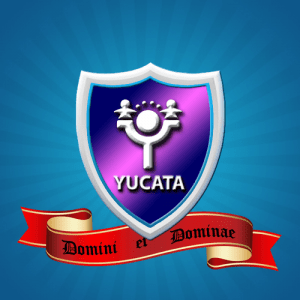 Yucata can be found at https://www.yucata.de/.  This site features 118 games that lean heavily towards the Euro side of gaming, and also being the only place online to play many heavier games. That said they do include some lighter games as well. Some of the most popular games on Yucata include The Castles of Burgundy, Trajan, Marco Polo, and Carcassonne Hunters & Gatherers. 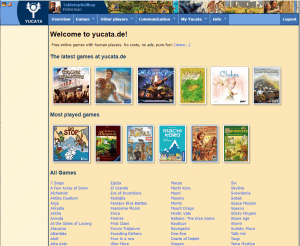 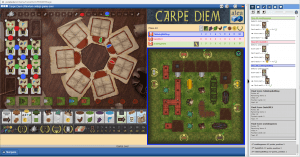 While there is no premium account you can play as a guest or register. The benefits of registering include all the basic stuff. Getting your own user name and ranked stats etc. The main reason though is so that you can invite friends to games instead of always playing with strangers.

Yucata also has a donation system which gives you a bit of flair on the site and nothing else. You get a unique online icon and the word “sponsor” next yo your name. This actually looks almost identical to the system Board Game Geek uses for supporters and is obviously based on that. 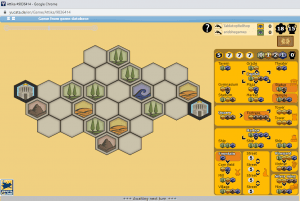 The thing I like the best with gaming on Yucata is the fact that I need to confirm all of my actions and get the option to undo what I’ve done before that. This alone has me wanting to play certain games that are on all three of these sites on Yucata only.

What is most frustrating about Yucata is that it’s a mixed bag. Some games look amazing, play amazing, and are basically just as good as playing at the table with friends, but then other games feature ugly abstract art and I find I’m fighting with the interface just to finish a game. Due to Yucata being a passion project you just don’t see the level of unity and development that you find on the other sites. 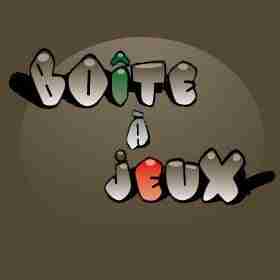 Boite a Jeux can be found at http://www.boiteajeux.net/.  This site only features 61 games all of which are Euro-games including a solid mix of heavy Euros and Abstracts.  Some of the most popular games on Boite A Jeux include Concordia, Dungeon Petz, Dixit, Jarnac, and TZAAR. 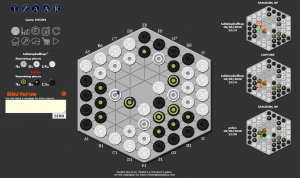 A subscription for Boite A Jeux costs $5EUR a month, $20 EUR for 6 months, or $35 EUR a year and provides the following benefits:

The biggest problem with Boite A Jeux is that many basic features, things I would expect to be able to do for free, require you to pay for access to them. I don’t think being able to set up a game to play just with my friends or the ability to have the site tell me when it’s my turn should cost me additional money. These are features that should be part of any online gaming interface.

Due to this, I would only consider using Boite A Jeux if I bothered to pay for a premium account. The problem with that is that a Boite A Jeux premium account would cost me as a Canadian double the cost of a Board Game Arena account and I just can’t justify that when I look at the two sites side by side.

What Boite A Jeux does offer are some unique games that you won’t find anywhere else online. It’s the game selection that still tempts me to come back to Boite A Jeux.

Overall thoughts on these three online board game sites:

If it’s not already obvious, I listed these three gaming sites above in my order of personal preference. Of the three sites I get the most benefit from using Board Game Arena, it offers the best interface and the widest verity of online gaming options. It has been and so far will continue to be my prefered place to play board games online.

In the end, I was very surprised with just how much I enjoyed gaming on Yucata, once I found the right games. Yucata really is a mixed bag in a number of ways and there are things I love about gaming there and things that drive me nuts. The biggest advantage to me is the ability to undo your moves on Yucata. 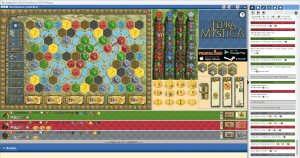 If I could get someone to add the end of turn confirmation and undo to Board Game Area I would be a very happy man. That feature alone will have me going back to Yucata. The main thing with Yucata is that you have to try a variety of games and find the ones you like and that work best on that site.

This leaves me with Boite A Jeux. I wanted to like Boite A Jeux, I really did. Boite A Jeux features many games that aren’t available anywhere else online, including some games I really love. While the implementation of some games may be subpar, a couple of my favourite games were perfectly implemented here.

The problem with Boite A Jeux is their membership model. Many of the features I expect from any online gaming site are hidden here behind a paywall, a paywall that’s double the cost of any of the other options we looked at. I can’t see wanting to play on Boite A Jeux without a premium account and I’m not currently willing to pay the cost for one.

What may matter the most for most people though are the games. That’s what is going to dive you to one of these sites over another. If your favourite game is only available on Boite A Jeux, then you are probably going to want to get a premium account and play the heck out of that game.

What I recommend doing is finding a game you want to play and trying it on each site that has that game and then deciding between them which version of the game you have the most fun playing. This will be based on interface, graphics, onboarding, etc.

There’s no right answer for everyone on which of these three sites really are the best. It’s going to be about your personal tastes and preferences. Yes I very much prefer Board Game Area, but there are some games I will only be playing on Yucata, and maybe sometime I will even return to Boite A Jeux just to play a game of Dungeon Lords which is implemented there so well.

Do you play board games online? Where do you get your digital board gaming fix? Let us know in the comments! 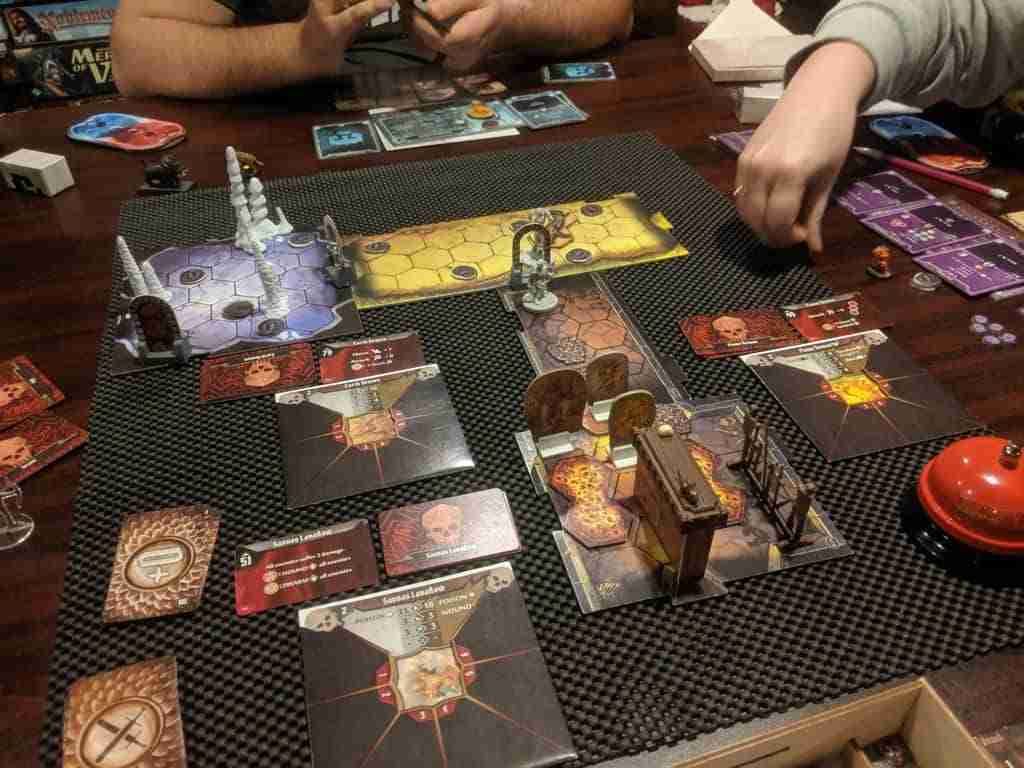 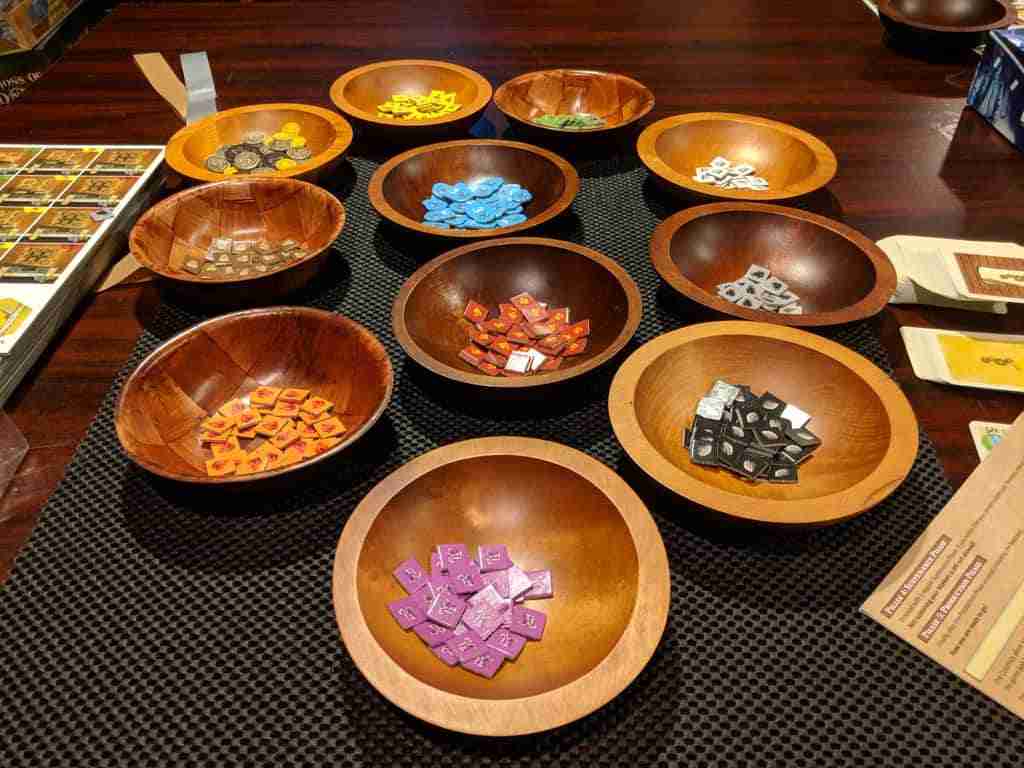 Must have tabletop gaming accessories – Ask The Bellhop