You are here: Home / Gaming Advice / Trying to Define the Difference Between a Eurogame and an Ameritrash Game – Ask the Bellhop

When consuming board game media you will often hear the terms German-game, Eurogame, Ameritrash, or Amerithrash. Today I’m going to talk about what those terms mean in answer to a question from a fellow Windsor area gamer.

What’s the difference between a Euro game and an American game? I see reviews where they describe a game as a Euro type game what are they referring to?

In the broadest and simplest terms, when most people say a Euro game they are talking about a game where the mechanics are the main focus and the theme is not important at all. In many cases, you will hear terms like pasted on theme or themeless.

On the opposite side are games that are highly thematic and full of story, where the theme is the selling point of the game and the mechanics are secondary. These types of games are often called Ameritrash.

The Long Answer:
The Euro/American thing in board game media is old and messy 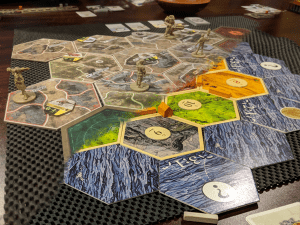 One of the things that I’ve noticed about geeks/nerds is they like to classify things. This extends to their hobbies. Go into any game store and you are likely to overhear a Story Game vs. Role Playing Game debate. Check out any board game forum and you will find people arguing about what exactly is a Mass Market Game vs an Indie Game vs a Hobby Game. The whole German-game, Eurogame, Ameritrash argument is just another part of this. While these specific terms may be new, (it looks like Ameritrash may have been coined in 2000 on Usenet) the debate itself is old.

The problem is that this argument has gone on for so long and so many different people have different opinions on it that the entire thing is pretty messy and blurry. The other problem is that the game industry has evolved significantly and these definitions now, at least to me, feel old and dated and no longer apply in many cases.

Despite that, these are terms people continue to use, myself included when I don’t catch myself. Since I received a question asking for definitions, I figured I would provide my personal version of what I think differentiates a European style from an American style game. It’s also worth noting, that these terms aren’t specifically geographical. You can have a Euro-style game that is made in North American and Games Workshop is in the UK yet puts out a ton of games that most people would consider very much Ameritrash.

I think people need to realize that these definitions aren’t perfect and that most modern games now incorporate aspects of both styles of game.

Here is what I think when I hear the term Euro: 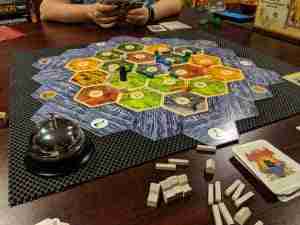 I’ve been gaming for a long time, and the way my brain works is that when I hear the term Euro I think of a bunch of specific games. The name Euro or Eurogame is derived from German-game and the reason that term exists is to give a name to the style of games that were coming out of Germany at the time. As we talked about on our Gaming Awards Podcast Episode, Germany is pretty much responsible for what we now know of as modern hobby board gaming. It was these new games with new mechanics and a different look at interaction that changed the gaming industry, the world over.

Here are some of what I think of as features introduced by these games from Germany: 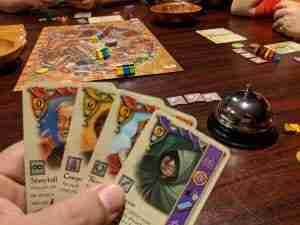 Little to No Player Elimination and/or Interaction – These games are about scoring points and trying to do that better than anyone else. They are about building some form of engine and reward efficiency. While there may be player interaction, it is usually indirect, through trading, setting market prices or position on the map. There is usually no direct conflict or attacking other players.

A Focus on Mechanics Over Theme – When you have a game where the theme doesn’t matter at all you are probably looking at a Euro. European games are often developed mechanics first. The designer comes up with an interesting new system for using the pieces or playing cards, or using dice in a new way and then build a game around it. It’s often the publisher who decides on the final theme for the game based on current market trends and predictions. You will often hear terms like “pasted on theme” or “themeless” when you hear people talking about Eurogames. Many Eurogames have no theme and are called “Abstract.” 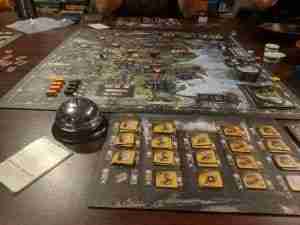 Low Randomness and/or a Way to Mitigate Any Randomness – While you will find dice and cards in many Euro-style games, they are not used frequently. When they are used there is often a way for players to mitigate the random factors. Most Eurogames contain a lot of open information and when random elements are included the players are often told the exact odds of those random factors. The focus is on the players making decisions with a lot of information up front. The design focus is that the winner is determined by skill and not luck.

You Play Yourself – In pretty much all Euro games you aren’t playing any kind of role or character. While the theme may say you are the leader of a household of merchants, this actually means nothing for the actual gameplay. You make all decisions as a player for your faction, whatever that faction may be. In some cases that may just be a collection of cubes, in others, you may have workers under you, but in no case do you really feel like you are playing a role. You just use the resources given to you to score the most points as efficiently as possible.

Here is what I think when I hear the term Ameritrash: 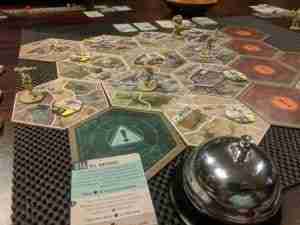 Now a lot of people think of Ameritrash as derogatory. It’s derived from Eurotrash which was not meant as a compliment so that makes sense. It does stink of superiority to me. It implies that American style games are somehow worse than the German style games I just talked about, and to me, that is totally not the case! I personally think that both types of games are equally valid and I enjoy playing both. This is why I personally try to use the term Amerithrash, though I’m not really a big fan of that term either, but growing up in the 80s and 90s and listening to Anthrax and Megadeth I can say Thrash is much better than Trash. 😀

Here are some of what I think of as the features of American Style Games: 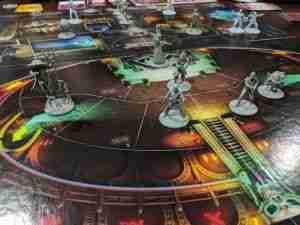 Dripping With Theme – You are running trying to escape the Zombies. You are a Space Marine on a derelict spaceship trying to survive the Alien onslaught. Your party must sneak into the dungeon and steal the treasure without waking the dragon. The players are private eyes in the future competing to see who can solve a murder first. All of these games are all about theme. In most American style games the story is more important than the individual mechanics. They are often much more about the experience of playing than they are about the final score.

Direct Conflict Is Common – Many Ameritrash games are about beating your opponents. Direct conflict, where you are destroying, capturing or stealing resources is common. Many of these games have sides, where you will find one team opposing another team and sometimes one of those teams only has one player. These one vs. many games often play somewhat like Role Playing Games with one of the players controlling multiple enemies. Take that, and backstabbing can be common. You will also find games where the real goal is preventing the other players from winning. 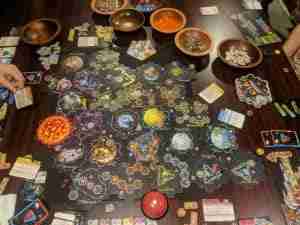 Players Often Play a Character or Role – I’ve already alluded to this when talking about the other features. In many Amerithrash games, players are playing a specific character or team of characters. The squad or party is common. These characters have names, backgrounds and personalities. While roleplaying isn’t required to play most of these games it’s often encouraged. Other RPG elements like levelling up and collecting better gear or equipment are also common.

Randomness is Embraced – Dice are a big feature of many American style games. Rolling to move. Rolling to spot something. Rolling to hit. Rolling to resist damage. So many dice rolls! Sometimes the dice are replaced by cards, tiles, or even chits pulled from a bag. One of the features of Ameritrash games is that you never know exactly what’s going to happen. Tactics are rewarded over strategy, as it’s difficult to plan ahead with so many random elements. The randomness adds an element of surprise to the game as well as increasing replayability. Due to random elements, no two games will play out the same.

Some examples of games that fall under each category of games:

A lot of this to me now falls under: “You will know it when you see it”, which I think comes mostly from hearing into what category other people have been placing games I know. Perhaps this is the best way to learn what a Eurogame is when compared to an Ameritrash game, provide a list of games under each category.

The Castles of Burgundy

Final thoughts on these somewhat dated board gaming terms:

So there you have my personal thoughts on the differences between so called Eurogames and Amerithrash games. As I said above, while these definitions are still somewhat useful for differentiating between different styles of games, nowadays these terms are becoming less and less useful. Gone are the days when a game is either all about the theme or all about mechanics. Now we have plenty of games that manage to do both. 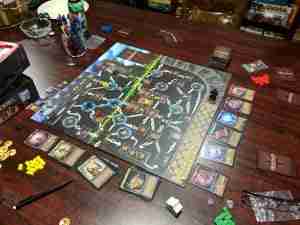 is the perfect example for me. It takes the theme of the Games Workshop classic DungeonQuest

. The result is a game that is deeply thematic but still has most of the trappings of a Eurogame.

is another perfect modern example of a game that fits into both categories. In Gloomhaven you are playing a character and advancing that character while exploring dungeons but the actual combat system is all about working with the other players to use your limited set of resources (in the form of action cards and items) as efficiently as possible.

So now that you know what I think, feel free to tell me why I’m wrong. You can do so in the comments below or hit me up on social media where I can be found as “tabletopbellhop” pretty much everywhere. 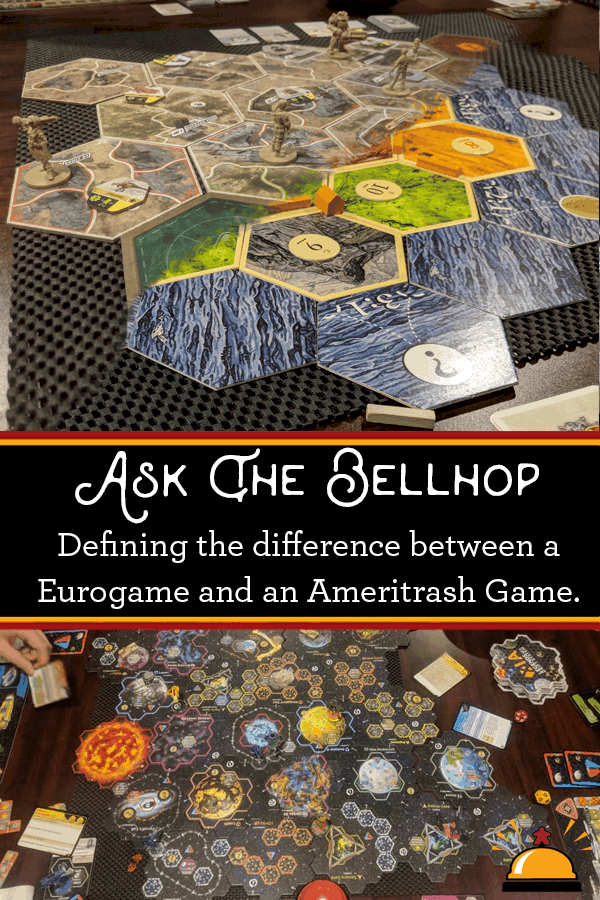 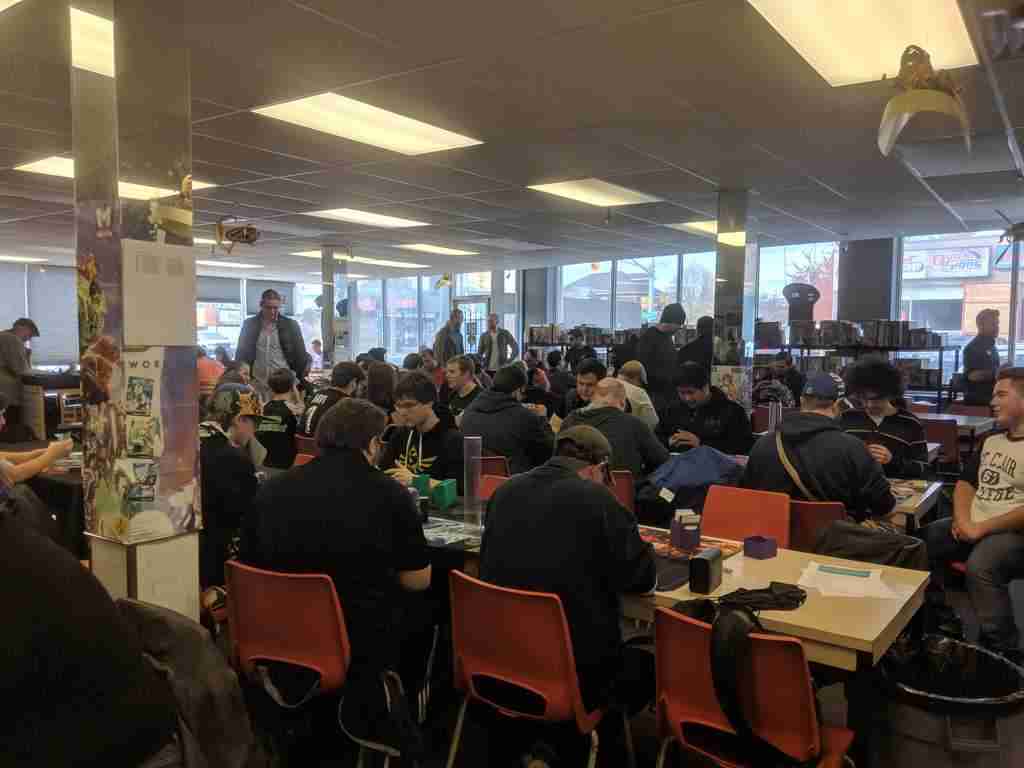 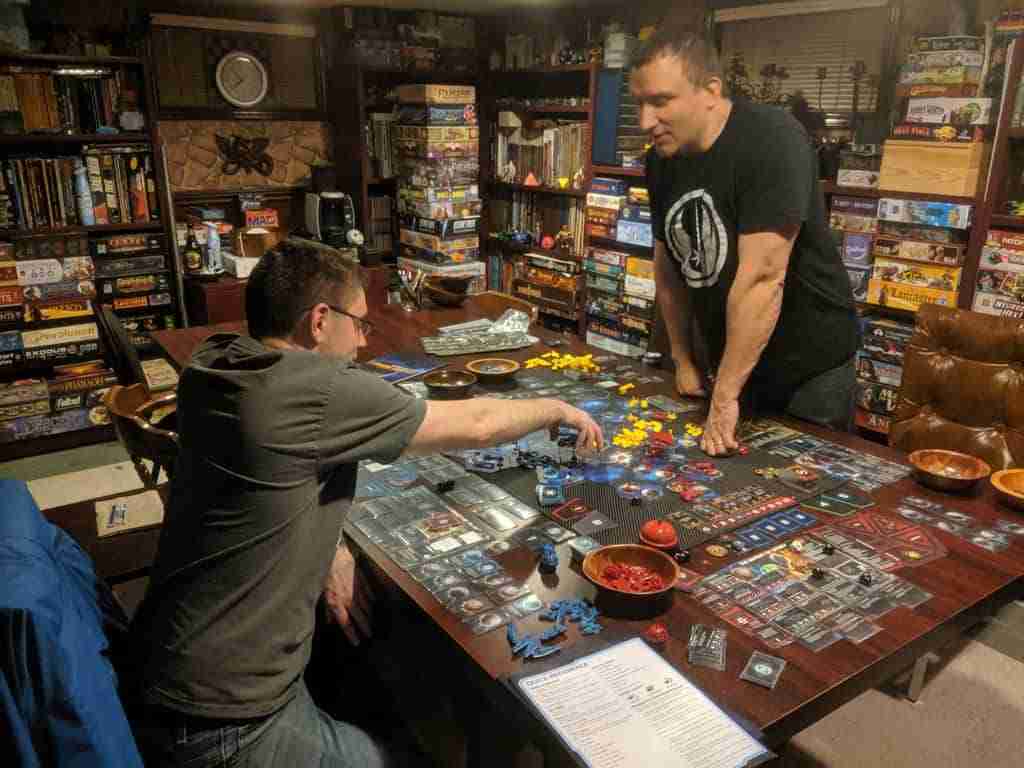 Great Board Games to Play When Stuck at Home 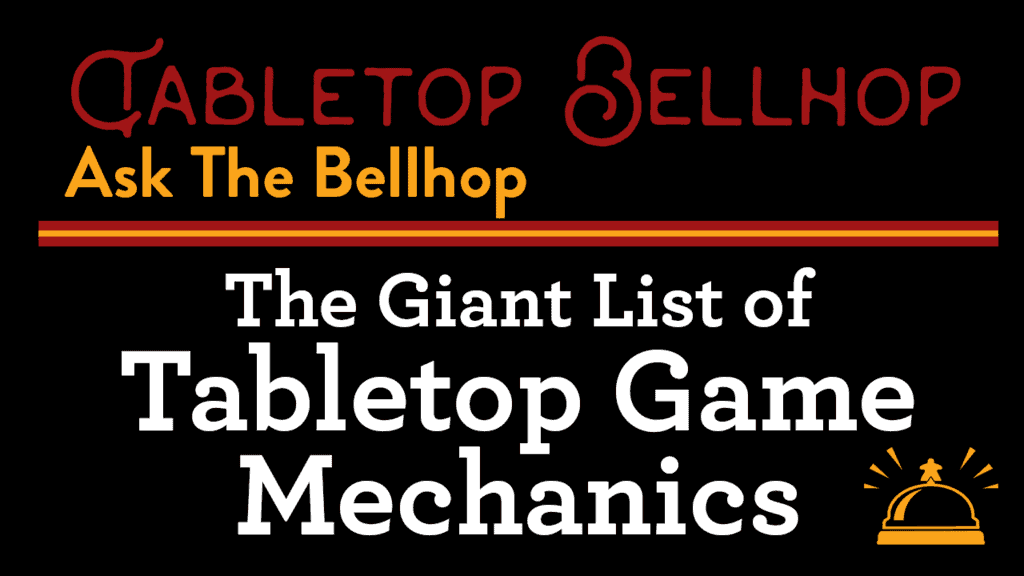