You are here: Home / Gaming Advice / Great Board Games For When You Have a Mix of Gamers and Non-Gamers – Ask the Bellhop
74 Shares

What do you play when your board game table is a mix of experienced board game players and people new to hobby board games? That’s what I will be discussing today based on this question:

What are some of your favorite games for when you’ve got a mixed crowd of mundanes and gamers? I’m looking for things that are simple enough that they won’t overwhelm nubes, but interesting enough to engage gamers in the same group.

The Short Answer
Try to find short, easy to teach, board games that also have a good amount of depth to them.

I’ve talked about gateway games many times in the past on the blog. Most recently I looked at great gateway area control games. Before that, I highlighted some of the best gateway games to come out in the last three years. I also talked about great games for catching new gamers. There are probably more, it seems there’s always someone looking for a gateway game or two. 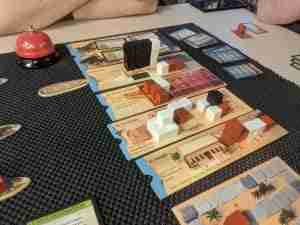 What all of these articles have in common is that they all recommend games that have certain elements that I think are important for engaging new players. For a good gateway game, you want something that is accessible. Something that isn’t overwhelming, that’s easy to teach and doesn’t include too many different mechanics. You also probably want something relatively short. You want the barrier to entry to be as low as possible for a new gamer.

While these traits are great for engaging a new player, they may be the exact opposite of what would attract a more experienced gamer. For an experienced gamer, you want to add in some weight and engagement. You want games where strategy and tactics matter. You want meaningful decisions. An experienced gamer wants to have control over their ability to win or lose.

So the trick is to find games that don’t have too many mechanics and are easy to teach yet still offer some really solid decision points where player choices matter and affect the end outcome.

Since getting Imhotep I’ve played it with a wide variety of players at different skill levels and all of them have enjoyed playing it. Imhotep has the added bonus of having a second side to each of the player boards. These “B” sides are a bit more complicated and allow for more tactical and strategic play. What I actually recommend with a group with mixed experience is that you play two games. One using the “A” sides and then another using either a mix of A and B sides or just all B sides.

The Long Answer
Here are some of the best games for playing with a group with mixed experience levels:

There are a number of tabletop games on the market that are both easy to approach for new players and also engaging enough to keep long time gamers interested. Here are fourteen suggestions for great games that will appeal to both new gamers and experienced gamers alike.

Note these games are in no particular order. They are listed in the order I thought of them, not in any order of preference.

– Of all of the classic gateway games, that have been around for years now, Carcassonne still remains one of my strongest suggestions. The actual rules of Carcassonne are pretty simple. Place a tile and then decide if you want to put a meeple on that tile or not. It’s the scoring that can be a bit difficult to grasp for new players, but it’s something they will pick up with repeated plays. What I love about Carcassonne is that there is a lot more to the game than it first appears. I’ve found players have eureka moments when they figure out things like how to steal a city from another player or remember exactly how many cloisters are in the bag and then adjust their strategies accordingly.

– This is a great abstract strategy game that appeals to all types of gamers, from new to experienced. I’ve yet to find someone that totally hated this game, though I am now running into people who have played it so much they are getting sick of it. If you’ve got a non-gamer that likes tile-laying games like Scrabble this is a great next step and there’s more than enough depth here to keep an experienced gamer happy.

– With a mixed group that includes new gamers start off with just Kingdomino. While it’s a very solid game and experienced gamers are going to like it, they will probably want something more. That’s why you break out Queendomino once everyone has a good handle on Kingdomino. Queendomino is much more of a “gamer’s game”, adding in variability through building tiles and resource management by requiring players to spend money and tax their kingdoms. Queendomino also adds in a bit of a take that mechanic that experienced gamers should enjoy.

– Or any other gateway engine building game like Splendor

. I listed Gizmos as it’s my personal favourite. All of these games are tableau-building engine-building games that are easy enough to learn that even non-gamers can enjoy them. There’s something about starting off with nothing and ending up with (hopefully) a well-oiled point-making machine at the end of one of these games that is richly rewarding.

– I’ve found that the theme of building a sampler box of chocolates is a pretty easy sell to gamers of all experience levels. This was another game that has some great eureka moments in it. Everyone I teach this game to has commented that there’s a lot more going on than it first appears. While you can just play trying to make the nicest box of chocolates for yourself, the game really starts to shine when you realize it’s more about watching what the other players are doing with their candies.

– This dice drafting, stained glass window building game is both elegant and beautiful. Each turn you are going to pick two dice and put them on your player board, but you have to make sure you don’t have the same colours or numbers touching. This is harder to do than it looks. Then add in a random set of tools that let you break the rules and a variety of different player cards of various difficulty levels and you have a great game for players of all gaming experience levels. I particularly like how new players can stick to easier windows. They won’t get as many tools to use but they shouldn’t need them with the easier boards.

– This is a game that plays completely differently with a group of new players than it does with experienced players, yet works brilliantly with a mix of both. New players tend to focus on the journey and the story of Tokaido, whereas experienced players are all about making sure that other players don’t get what they need. This game can be totally zen or completely cutthroat and is just as fun both ways.

– This is another tried and true classic game. One of the great things about Bohnanza is that every player is usually engaged every round. Even if you don’t have or want the beans up for bid that round, you should be paying attention to what other people are offering or wanting so that you can better negotiate on your turn. This is one of the best higher player count games I own and a staple at any public play event I run just because it works so well with players of any gaming experience level.

– I love watching this game blow people’s minds. In Lanterns when you play a tile not only do you get something out of it but so does every other player. The secret to playing well is being sure you don’t help someone else more than you help yourself on your turn. It’s this aspect that will keep a heavier gamer interested even when the basic mechanics are rather simple.

– You may want to hide the box and all of the extra Exploit components when showing Endeavor to a new gamer for the first time. While all the bits and bobs can be a bit intimidating, Endeavor is actually a very straightforward game. As every player is going to add one new building to their town each round, the decision tree starts off very small with often only one choice in the first round, and then grows slowly as the game goes on. Just save all of the Exploit rules for when everyone playing has some more experience.

– This deceptively simple abstract game is one of my favourite games to put into Board Game Blitz tournaments and that’s because of how tactical and strategic it can be. This is another game where you can play just fine after a quick teach of the game but where you are going to learn and figure out better strategies the more experience you have. While there’s a good chance an experienced player is going to beat a new player, I can almost guarantee that the new player is still going to have fun and learn something and play better the next time.

– One of the best things about Takenoko is its theme and table presence. People are just drawn to the little panda miniature and the small gardener and the beautiful wooden bamboo pieces. The theme draws people in but it’s the simple to learn mechanics and surprisingly deep gameplay that will bring players back. This game is simple enough that I play it with my daughters but deep enough that I feature it in board game tournaments.

– Sometimes the trick to engaging a new player is to play a game about something they already care about. If you’ve got a fantasy or Dungeons & Dragons fan at your table they will probably love Lords of Waterdeep. This is a great intro level worker placement game that’s got plenty of depth to keep an experienced gamer interested. Toss in the Skullport expansion the second time you play and those experienced gamers will thank you for it.

– Here’s another game with a theme for hooking those non-gamers. Hogwarts battle has the added bonus of being a cooperative game. This lets the experienced players work with the new players in order to defeat the forces of Darkness together. I was very impressed by this great introduction to deck-building but expect the difficulty to ramp up significantly when you hit Book 4. 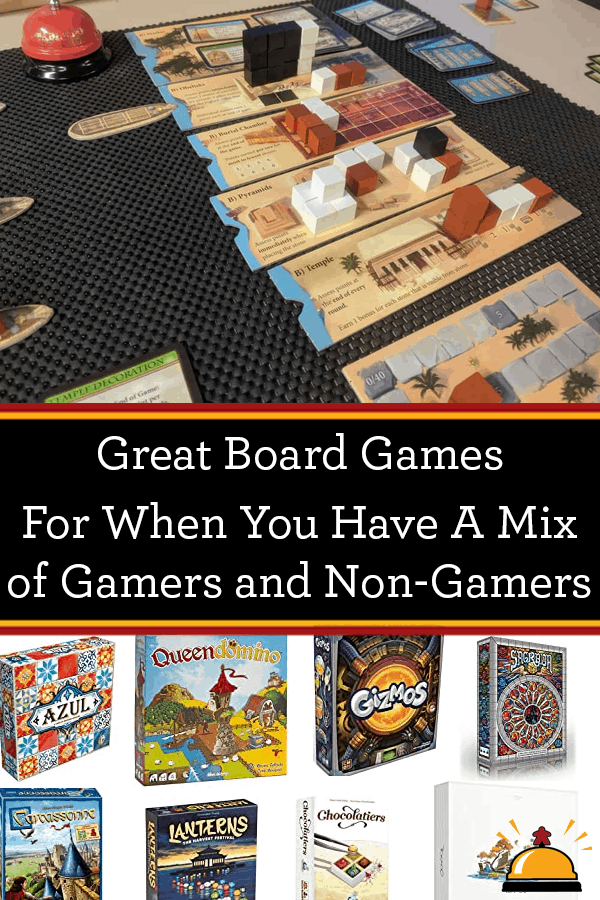 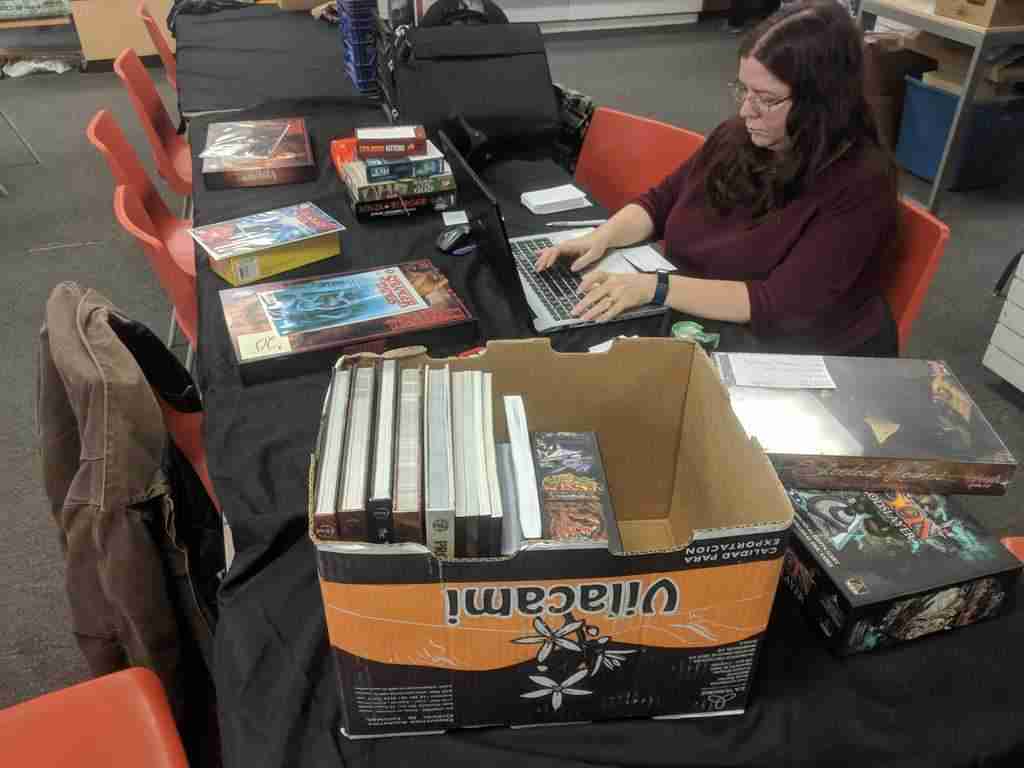