You are here: Home / Gaming Advice / Raising the Next Generation of Tabletop Gamers, Gaming with Kids – Ask The Bellhop

Today I want to talk about gaming with kids and raising the next generation of tabletop gamers.

This blog post is both inspired by and derived from Tabletop Bellhop Gaming Podcast episode 39. In this episode, Sean and I had an open discussion about what we are doing as gamer parents to try our best to raise our kids to follow in our footsteps.

Before we start, a caveat: Every kid is different!

What I am talking about below is what I have learned from my kids as well as what I’ve learned from Sean about how gaming has gone with his family. Every child is different. What is true for us may not be true for you. The advice below is based on our personal experiences, and while I think it is applicable to most families it may not be a perfect fit for you.

Some background. Gaming with my own kids and past articles. 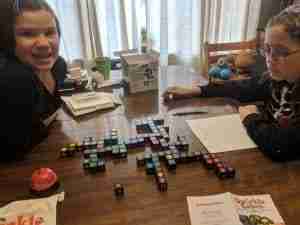 I’m a proud gamer dad of two girls. Currently ages 9 and 11. I’ve been gaming with my girls pretty much since they were born and we continue to play games together. In addition to playing with me, they both enjoy playing games by themselves and every now and then with friends. It’s always a joy to walk into the room and see them sitting on the floor playing something.

My girls have their own board game shelf and sometimes, even their own shelf of shame. Right now that shelf of shame has the Starter Set for the Tales of Equestria roleplaying game on it and that’s it. 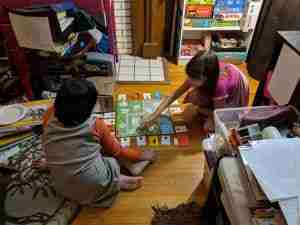 This isn’t the first time I’ve blogged about gaming with kids. The difference this time is that this isn’t a game suggestion article. The past two articles were in response to questions I had received looking for specific game recommendations. The most recent one was Some of the Best Kids Board Games, where I talked about competitive games to play with kids. Previous to that, way back in July 2018, I answered a question from Brian Kurtz in What Are Some Less Well-Known Cooperative Kids Board Games?

I still stand by everything I said in those past articles, and while I did cover some tips for getting your kids to the table, they were mostly about picking out what games to play with kids. Here I want to talk more about actually gaming with your kids; when to start, some do’s and don’t’s and things to watch for.

When should you start gaming with kids?

As early as you want. I, honestly, don’t think it’s possible to start getting your kids into games too early. 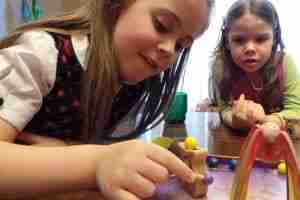 At this point though, what you are looking for is the play. Don’t worry about the rules. Seriously you can basically toss those out at this point. Focus on the fun.

When kids are really young gaming is just another form of play. It’s all about just interacting with your kids and having fun. Getting the kids used to seeing things like cards, counters and dice. Letting them see a board and move pieces on it.

While playing you can try to introduce some really basic gaming concepts. Things like taking turns, counting pips on dice, rolling dice, drawing cards or tiles. At an early age, games are more about education than competition. You are looking to build basic skills. Things like manual dexterity, memory, pattern, shape, and colour recognition, counting, your stuff vs. my stuff vs. our stuff, etc. 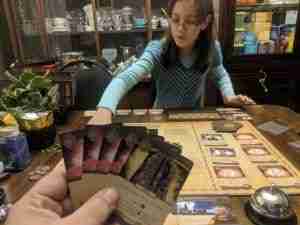 This applies to both roleplaying as well as board games. When you are just starting out with RPGs you want to stick to pure imagination. Don’t worry about rules and character sheets, just worry about telling a cool story with your little ones. You don’t want to impose any limitation on imagination.

Slowly introduce rules and complexity when gaming with kids.

Once the kids you are gaming with get a bit older and now that you’ve already shown them that games can be fun, that’s when you can start worrying about things like following the rules. 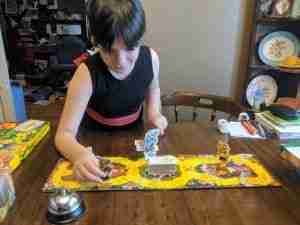 Moving past the basics you want to start teaching your kids some of the more abstract concepts in gaming. Things like the importance of having fun over actually winning or losing. Handling yourself well when winning and losing. How to handle in-game conflict and making sure that it doesn’t spill into real life conflict. Cheating and why that’s never cool.

The best way to teach many of these abstract things is by exemplifying them yourself. Children learn from what they watch, especially when the people they are watching are members of their family. This is when the adults at the table need to really watch how they behave when playing games and be sure to pass on good behaviours while avoiding bad ones. 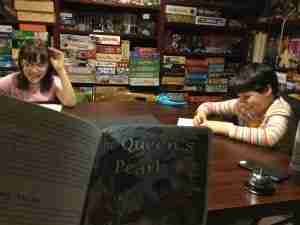 Looking at roleplaying games, here is where you are going to start making characters, following mechanics and adding limitations. You are going to move away from things like pass the stick storytelling and completely open narration. Here’s where I would introduce the typical Games Master role, and presenting the game as a set of circumstances they react to as opposed to making everything up on the fly. There are a great number of kid-friendly RPGs out on the market now, games I wish existed back when I was learning to play myself.

Heading back to the board game side of tabletop, I suggest trying cooperative games where you can play with the kids and teach them by working together on the same side. Even when not playing a cooperative game it’s worth trying to team up with your kids. Have each kid paired with an adult so that the adults can coach the kids and work with them to both learn and play whatever game you are all playing together. Even if there’s only one adult, they can work with multiple kids giving each of them suggestions. One thing to watch out for is dictating the child’s actions. Be sure to still give them agency and allow them to make mistakes.  It’s far better to let them fail and explain why then to forbid a bad action in a game. 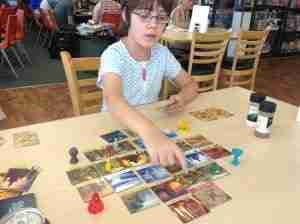 There is a difference between a bad move and a wrong move. A bad move is a bad tactical choice a bad play, whereas a wrong move is something that violates the rules of the game. I think it’s important to stop the latter but not the former. Don’t let your kids break the rules, but do let them make mistakes. I also don’t think parents should throw games to let their kids win. I would much rather win a game and explain why what I did worked and/or explain what they did wrong, than reward bad plays and throw a game. As I discussed when talking about competition at the game table, I try to teach my kids to always play to win, though actually winning isn’t as important as having fun playing.

Once you get into playing actual games and following the rules you can start introducing games that are great fun for adults as well as kids. I actually strongly recommend trying to stick to games you enjoy because the kids are going to feed off you. If you are having fun there is a better chance they will have fun. Check out my previous posts for recommendations of games that are fun for both adults and kids.

Do not force gaming on your kids.

One of the most important things is to not push gaming too hard.

If your kids seem to be fully understanding the games you are playing, sure try out something harder and more complex, but if they are no longer having fun, don’t be afraid to take a step back. My kids still love to play some of the games they got when they were toddlers and there’s nothing wrong with that. Don’t rush to get your kids into heavier and heavier games, there’s plenty of time for that. Stick to games they know and enjoy and introduce new things slowly. 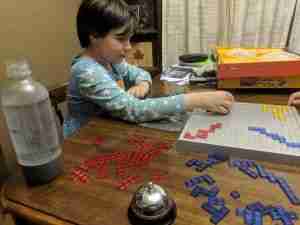 There may come a time when your kids just don’t want to play games anymore. That’s okay too. Let them focus on what they are enjoying at the time and bring up games sometime later. Games are meant to be fun. They should never feel like an obligation. So make sure you don’t turn gaming into one for your kids.

Another aspect of this is kids losing interest. It’s a fact that most kids don’t have very long attention spans and that applies just as much to tabletop gaming as anything else they are into.

I’ve said it multiple times on this blog and on our podcast. It’s okay to not finish a game. This is especially true when playing with kids. If the children you are playing with are losing interest, suggest stopping the game. This could mean leaving the game set up to return to later or it could mean putting it away and starting fresh some other day.

What do you do when the inevitable tantrum happens?

Stop the game right then and there. As noted above, just because you started a game doesn’t mean you have to finish it. When things go south, just stop. This could mean a pause, a short break or may even mean putting the game away. 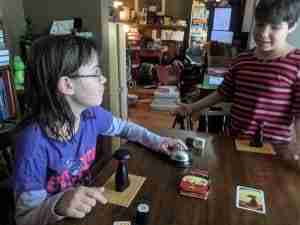 The thing you really need to be careful about here is avoiding the rage quit. You don’t want your kids to learn that it’s okay to quit a game they aren’t winning, or when things aren’t going their way. It’s a bit of a fine line.

You want to stop when the game isn’t fun anymore, for any reason, but be sure to not reward bad table manners. This is why it’s important to teach your kids early that it’s okay to lose. It’s something that should be taught early, at a young age.

Ending the game should be a mutual thing. The child needs to understand why you are stopping and realize that it is due to their behaviour and that it is not acceptable. “What you are doing right now is making the game not fun for the rest of us, so we are going to stop, okay?”. “You obviously aren’t having fun right now, it’s time to take a break. Do you want to try to come back to the game later?”

So there are some of my suggestions for getting the most out of gaming with your kids. My suggestions on what we should be doing to raise the next generation of gamers. For those of you who game with kids, what are some tips and tricks you have learned while playing with children?