What are some of the Best Gateway Area Control Games? – Ask the Bellhop

Today I’m going to be talking about some great gateway area control and area majority board games. We discussed this topic a bit on our AMA episode but I thought it would be worth taking a deeper dive into introductory area control games.

The Short Answer
During our AMA I strongly suggested the board game Small World for a gateway area control game. 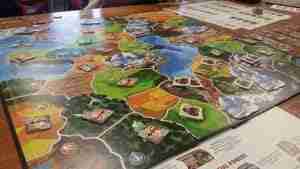 Last week we held our first of what will hopefully be many monthly AMA or Ask Us Anything live shows. You can check out the podcast version of that AMA or watch just the AMA segment of the podcast on Youtube if you are curious. One of the questions we covered was this question from Ralph.

During the show, the first game that came to mind was a classic Rio Grande Game from 2002 called Clans. Sean pointed out that it is long our of print but has been released with a new theme as Fae from Z-Man Games. I personally haven’t tried Fae to know how it compares. A bit later I remembered a fantastic gateway area control game: Smallworld,

players are fighting for control of a world that is simply too small to fit everyone. Players start by picking a race and power combination made up of fourteen different races and twenty different powers. Players get chits representing their units (and sometimes some special tiles for specific races and powers), they then expand out onto the map. To take over a section of the map you just have to spend more tiles than are already there. If you don’t have enough you can push your luck to roll a die and maybe get a bonus. At the end of the turn, you get one point for every area you control.

The problem is that you will quickly run out of units and then can no longer expand and will become very vulnerable to your neighbours. It’s then that you go into decline. Players who are in decline spend one last turn playing that race, flipping all their tiles over and then start off the next turn as a new race expanding outward yet again.

Small World is a brilliantly simple area control game. The random combinations of races and powers add a ridiculous amount of replayability to the game and the rules are simple enough that even kids can play and enjoy this one (BGG lists the suggested age as 8+).

The Long Answer
Are we talking about gateway area-control or area-majority games? 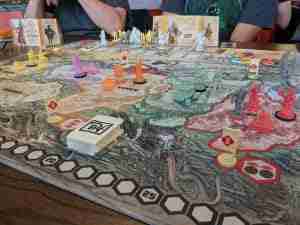 In an Area Control game, you get points for controlling a section of the board or map. In these games, most of the time only one player can have pieces in a section. The most well known Area Control game is probably the classic Risk

, but there are many out there. Many wargames are area control games.

Since Ralph isn’t here to ask, I don’t know if they are specifically looking for Area Control games or not, so the games I’m going to suggest below fall into both categories.

A list of some of the best gateway area control and area majority tabletop games:

– A Victorian-Era Rocketpunk game in which you are heading to Mars to find and mine celerium (an ore that can be combusted to produce ten thousand times more power than steam!). Players pick character cards each turn which determines when they place astronauts on space ships. Ships once launched land on the planet and multiple times during the game players get to mine the areas they control to score points. In addition, each player has a hidden goal. This is not only a great area majority game but it’s just a great gateway game or next step game, for fans of games like Ticket to Ride.

– This is a great example of an area majority game that isn’t about moving units on an overland map. Instead, your playing pieces represent players sending supporters to various exhibits at the fair. World’s Fair combines Area Majority with Set Collection as players gain reputation for leading an area in the number of supporters as well as collecting midway tickets and getting points for the breadth and diversity of exhibit cards they have collected. What I really like about this game is that all of the exhibits are actual inventions from the era.

– In this game players are building skyscrapers in downtown New York City in the year 1901. Skyscrapers are represented by palominos and are built into various districts on the board, they are bought via colour coded cards using a system that will be familiar to any Ticket to Ride player. The area majority aspect comes into play at the end of the game where players get points for having the most of their skyscrapers on each of the three main streets. What’s interesting here is that a building built on a corner counts for both streets.

– This classic Knizia game does area control in a rather unique way. Players are playing numbered tiles on a hex grid attempting to surround cities containing one, two or three different resources. Once a city is surrounded the player with the most points gets to take all the resources. End game scoring swaps the game over to a majority based system as players earn points for having a majority in each of the three resources. While Samurai came out way back in 1998 it continues to be in print today.

– Yes, I’m including a version of Risk on this list, a really good version of Risk. I was sceptical when Risk Legacy came out but a bunch of gamers I respect strongly recommended it and they were right. Besides being the first Legacy game Risk Legacy is a really good re-implementation of Risk. It’s victory point based and not just about taking over the whole map. The main thing this means is that games are generally short. The longest game we played was under two hours. The whole Legacy aspect is just an added bonus. An awesome added bonus.

– This card game takes the area majority thing and abstracts it. Instead of battling over spots on a map you are vying for control of area cards. You are doing that with forces made by smashing together two different card decks. So you get, for example, Alien Pirates battling against Wizard Zombies for control of the Tar Pits. Each deck plays differently and there are a ridiculous number of combinations, especially after you add in the number of expansions that have come out for Smash Up over the years.

– Personally I prefer the theme of 1812 for obvious reasons but 1775 is rated higher on BGG and may be the better game. Both of these games are cube-based, card-driven, war games. Don’t let that scare you away though. 1775 has often been called The Ticket to Ride of Wargames because these games from Academy Games are some of the most accessible wargames on the market. If you want a gateway version of a traditional area control wargame this is where you start.

– This is one I haven’t personally played but when doing research for this post to see what other games people recommended as great introductory area control games, I saw this game come up on list after list. In Royals, players take on the role of a great noble house in the 17th century and fight for control and influence in Europe. There are three periods and points are awarded each period to players with the greatest influence in each of the four countries. Sounds like area control to me, with a weight of under 2.5 on BGG.

So there are some of the best games for introducing a new gamer to the wonderful world of area control and area majority games. What was your gateway to area control? Let us know in the comments!