You are here: Home / Gaming Advice / 10 of the Best Three Player Board Games for Playing with a Toddler – Ask the Bellhop

I get a lot of questions from people looking for tabletop gaming advice when it comes to playing board games with kids. Some are broad questions like, “What games are fun for kids and adults too?” and some are much more narrow, like today’s question.

Question for ya: Friend asked me as the board game person she knows; she’s looking for good games for 3 that can be played with a Toddler-aged 3rd player. What was good with your family around that age?

The Short Answer
Pretty much anything by HABA USA is going to be a great board game for a toddler.

HABA started as a wooden toy company in Germany and has since grown to be one of the most well known and best sources of tabletop games for kids. They have an entire board game line for younger kids called “My Very First Games” that are perfect for toddlers.

Back when my girls were toddlers, HABA was a bit hard to find here in Canada. HABA games were never sold in mass market chains and usually had to be found in teacher’s supply stores or educational toy stores. When we did get lucky and find HABA games the selection was usually pretty small. What we did manage to find and buy my kids loved.

Since then HABA has made a real push into North America launching HABA USA and bringing more and more of their games over here. I see the games in stores a lot more often and it’s now very easy to order HABA games online.

The Long Answer
All toddlers have different skill levels so finding the right board game is about knowing your kids. 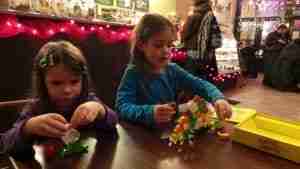 All kids are different. They learn at different rates and children of the same age may have widely different skill levels. This was one of the most shocking things for me to see as a parent myself, just how different my two girls were as they grew up and the varied times they hit various milestones.

Because of this, it’s really hard to tell anyone what the perfect game would be for their family. In general, I suggest starting off with simpler games that stick to just one or two concepts. Then if your kiddo seems to be rocking it, move on to something more complicated. There are going to be toddlers out there that will be happy with just rolling some dice and matching colours and we’ve all heard stories about that gamer parent whose three-year-old plays Power Grid with them. Both are valid and cool. Just don’t be that parent that forces heavier and heavier games onto their kids because they want to play them, base it off the child’s enjoyment and skill level.

One final note: Dylan is specifically looking for three-player games. Every game I list below I know to be great with three players. The thing is most of them are going to be great with more or less than that as well.

Here is a list of great tabletop games to play with your toddler:

Each of these categories is sorted in the order of complexity, with easier to learn, simpler games at the top and more involved games at the bottom.

Games that worked for us:

– Blue Orange Games is another company putting out amazing games for kids of all ages. They are my second recommendation after Haba for toddler-aged gamers. The first Blue Orange Game we bought was Bendomino. This is a super simple matching game with curved dominos where you are matching pictures and colours instead of pips. This one plays just as well with two, three, or four players. Consider moving up to the regular version of Bendomios if this seems too simple for your little one.

– This is another Blue Orange Games wooden box games from the same series as Bendomino Junior. This is a memory game with a twist. Instead of just flipping up two tiles or cards and trying to find a match, you are instead trying to find the four images that are on your personal bingo card. I personally found this to engage our kids much more than the typical matching game. The girls would get especially excited when their sister or dad would flip up a tile that was on their bingo card.

Laundry Jumble – This was probably our kids favourite game. Sadly it seems to be very out of print. This game consists of a small washing machine and a variety of small articles of clothing. The clothing was all made of a variety of fabrics and textures. Each turn players would draw a card and then reach into the laundry machine and try to pull out the matching article of clothing. Just watch out for the Skunk’s Undies!

– This one is from Hape which I tend to get confused with HABA. This is another wooden toy manufacturer that also has some great kids games. Pandabo is a very simple dexterity game where you are trying to stack bamboo sticks onto a rounded panda base. The sticks are of varying length, thickness and weight. A die is used to determine how many sticks need to be placed each turn. This is a great early introduction to stacking dexterity games.

– The was the first HABA game we bought. In this game, players are rolling dice and then matching them to spots on a race track in order to move their race car. It not only teaches colours but also pattern recognition and planning ahead. This game presents children with multiple choices and also introduces the idea of probability and odds. Of all the games we had for this age group this was the one that was the most engaging for adults.

Games we didn’t own but I think would be great with a toddler.

– This is an extremely simple stacking game using cute wooden animals. I would actually recommend this over Pandabo for a first dexterity game. I also strongly recommend the standard Animal Upon Animal game for when your child is ready to move on to something with smaller pieces and a few more rules. The full version of Animal Upon Animal has the added benefit of being just as fun with a group of adults.

– This game has been around for 30 years in Germany and is starting to be just as popular over here. Every time I talk about kids games someone points out that this was one of the first they bought for their little gamers. What’s great about this game is that it’s one of the few cooperative games you will find for toddlers. Had I been able to find this in Canada back when my girls were younger I’m certain I would have picked it up.

– A FLGS (Friendly Local Game Store) that closed up shop quite a few years back used to have this game on display in the store. Any time I went to the store with my girls they always ran over and started playing with these great zoo animal shaped blocks. I honestly can’t tell you anything about the actual game but I do know my kids loved the toy factor of this game from Blue Orange Games.

– This one comes recommended by one of our Patreon backers: Brian Kurtz. This is another cooperative game that’s great for young children. In this colour coordinated matching game players work together to help the owls fly back to their nest before the sun comes up. My only complaint about this one is that I wish it had some better looking components. I recommend replacing the owl token with some plastic owls, like these toy owls from Schleich.

– This memory and colour matching game from Blue Orange Games has won a ton of awards. Including the Dr Toy and Best Toy Awards. The main mechanics here are dice and memory but there’s also an advanced set of rules that adds a take that element letting players steal eggs from other players. I’ve not tried this one myself but I have to say the component quality looks amazing.

Tweets by tabletopbellhop
We use cookies to ensure that we give you the best experience on Tabletop Bellhop. If you continue to use this site we will assume that you are happy with it.Okay, I'll allow it.No thanks.Privacy policy
Revoke cookies