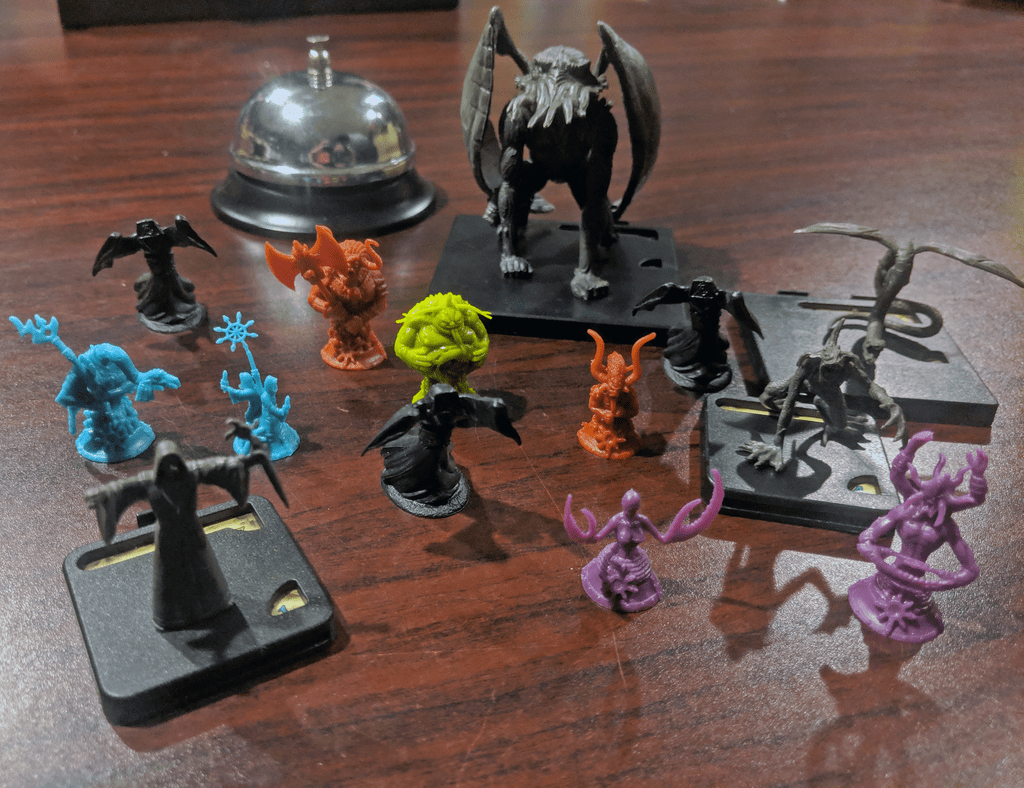 This week I’m going to be looking at some great horror themed board games, offering spooky suggestions for a terrifying tabletop game night.

With Halloween hitting next Wednesday and episode 14 of The Tabletop Bellhop Live podcast dropping on that day I thought it would be good for Sean and I have to have some appropriately themed games to talk about. 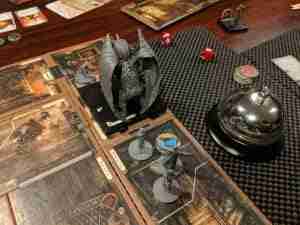 . I really dug that game and right now it’s my number one recommendation for a game to play when celebrating the creepiest night of the year.

Due to most of the game being controlled by an app, that also means you should be able to turn the lights down real low. There’s not a lot of reading needed after figuring out your character abilities. The soundtrack built into the app should also be great for increasing the immersion.

Similar to my last article about solo games, I’m no real expert when it comes to ghastly game nights. I’m not into the whole Cthulhu theme and haven’t played all that many great terrifying tabletop games. I’m not really into Horror movies or novels or the genre in general. I do dig Halloween though and I’m all for spending the night gaming after being done handing out treats or going out with the kids. 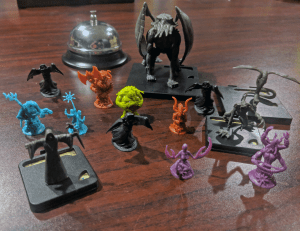 Here’s a short list of games with an appropriate theme that I actually do enjoy. This should be interesting as I doubt my list will overlap with many other Halloween themed lists. I don’t tend to enjoy the games that people usually have on these lists.

Vampires of The Night

– This is a very unique dexterity game that my kids have owned for many years and still play. You use a “magic” wand to try to move your vampire around and knock garlic off the board. It includes a very eye-catching 3d board and the components even glow in the dark. This one is great for really little kids and pre-schoolers.

My next recommendation is another one my kids love and that’s Monster Factory from Rio Grande. This is a great tile-laying game where you build monsters. If you manage to build a complete monster you score points based on how many eyes it has, then you can start building minion monsters. Unlike Vampires of the Night, this one is fun for more than just kids. My wife and I first played the game at Origins and played a few rounds ourselves before picking it up for the girls. I break it out on nights when we want to play something silly or light.

. The entire family still loves this game. The kids play it on their own. My wife and I grab it to play with friends. We all play together. This is the kids game that gets played the most in our house and it also fits the theme well.  There’s now an expansion out for the game as well, The Creepy Cellar Expansion

. The goal is to play all the cards in your hand by matching numbers or suits. Suits include Spiders, Ghosts, Goblins, Skeletons and Bats. Each suit has a special power that messes with the trick taking. It’s a very fast light game that’s simple enough most kids should be ablet to play it. (The box says ages 12+, BGG says 8+, I would side with BGG). The other thing I dig about Spooks is that it plays up to 6.

I don’t play a lot of word-based games, mainly because my wife is way better at them than I am. That’s probably why I dig Unspeakable Words

. It’s not about how large your word is, but rather how many angles the letters have. You can try to play big words but every word you do you have to roll a D20 and if it rolls less than your word score you lose sanity. Lose enough and you are out of the game.

. This takes the popular franchise and puts it into a generic fantasy setting. There’s no patient zero here, instead, it’s evil necromancers that are raising the dead. This one plays with 1 to 6 players and ends up being mostly a puzzle solving game once you figure out all the mechanics and the way the undead move.

. This is a devilishly hard Asian themed game that pits up to four Taoist monks against an incarnation of The Lord of Hell, Yu-Feng and his legions of ghosts. The players need to protect the town and hold off the ghosts long enough for Yu-Feng to manifest and then banish the demon himself. The fact that I’ve never actually won this game but keep coming back to it for more is a good indicator of how much I enjoy the very team-based gameplay.

is a very unique area control game. In it you are the head of a family in Medieval France and you are in charge of getting your “dying” family members into the best grave plots in order to maximize your name’s reputation. It’s a mix of action selection, coffin placement, and area control. Simple to learn and easy to teach it’s a neat somewhat morbid filler game.

It seems one vs. many player games are popular in the horror genre. I’m not a big fan of the various Arkham games but I do really enjoy Tragedy Looper

. That is when I have a group that knows how to play, as this game is a real beast not only to teach but also to learn. It’s a unique time travel game where one player plays the GM like Mastermind and the other players are stuck in a time loop. Each day the players take actions and at the end of the day depending on their actions a tragedy might happen. If it does the day repeats itself and they try again. If the players manage to get through enough time with no tragedy they win. Meanwhile, the Mastermind is trying to make sure the tragedy happens. As you can tell it’s not really easy to describe here either.

I didn’t think of my last game at first. I had to go downstairs and look at my game collection to make sure I wasn’t missing anything before I considered it. At first, I had to think whether it fits the theme or not, but then I realized that a game about four gods of chaos battling over a map of the world penned on human skin was pretty damn horrific. I’m talking about the classic Eric Lang game Chaos in the Old World

. One of the best asymmetric folk on a map games ever made, set in the Warhammer Fantasy universe, a world I’ve been a fan of since my teens. I really dig this game. I’m actually tempted to go back to the top of this article and swap this for Mansions of Madness as my top recommendation. I’m not going to do that though as this game is long out of print and probably never coming back due to licensing issues between Fantasy Flight and Games Workshop.

Revolting Recommendations from Others

I know my list is kind of out there when compared to many other Halloween lists. I figured it wouldn’t be right if I didn’t give the games I saw on list after list a quick shout out. So here’s a few games that it seems like everyone but me loves to play during the most spooktacular of holidays.

a one vs. many game about catching the Prince of Wallachia.

Everyone seems to love Dead of Winter

, a semi-cooperative, hidden role, zombie game. People continue to play Betrayal at House on the Hill

despite the fact that many of the scenarios are broken and even more are unclear.

Then, of course, are all of the social deduction games everyone knows I love so much. Werewolf

, and the faster One Night Ultimate Vampire

I’m sure there are more I missed. Feel free to mention them in the comments. The Best Ultralight Board Games: Light, Easy to Learn and Quick Playing Board Games For All Ages