You are here: Home / Gaming Advice / Looking for Games with a Similar feel to Catan – Ask the Bellhop 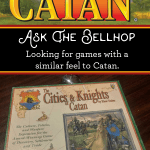 The first question we ever answered here at Tabletop Bellhop was about The Settlers of Catan. Today I’m answering a question that goes way back to that first blog post.

I have some friends who ONLY want to play Catan (I got invited to what I thought was a board game night but was actually just their regular Catan tournament style night), and I’m wondering what would be some good follow up games? They’ve been interested in Ticket to Ride and Takenoko but neither have the same feel of the trading/player interaction and the dice-rolling/chance part of the resource collecting (plus they all love the ability of the robber to screw someone over). Any help?

The Short Answer: There’s more to Catan than just Catan. 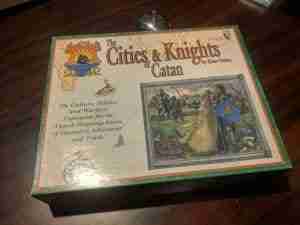 My first suggestion goes back to that original blog post, and that is to look at other games in the Catan line.

Many of the Catan

expansions can significantly change the feel of the game. Just check out my review of Cities & Knights of Catan for an example. Along with the expansions, there is also the Catan Dice Game

and the Catan card game, Rivals For Catan

. Then, there are the themed versions like A Game of Thrones Catan

. All of these games and expansion let the group stick with the game they know and love, while at least mixing things up a bit so you aren’t playing the exact same game every game night.

But that’s not quite what David is looking for.

The Long Answer: Finding a game with the feel of Catan is harder.

What I find fascinating about David’s question, is that they are not just looking for another getaway game. They want a game with a similar feel to Catan. A game with some of the same mechanics. David even mentioned some specific mechanics they would like to see in a next step game for this group. That I can work with.

What I’m going to do below is break my suggestions down into sections based on the mechanics David mentions in his question: Trading and Negotiation, Random Resource Generation and Resource Stealing.

If the thing you like most about Catan is the trading of resources these games might be a great change of pace:

– This is the purest trading and negotiating game I have ever played. The entire game is all about negotiations. How well you do is completely based on the deals you manage to make with the other players. There is a small random element in what tiles you draw at the start of the turn, but that affects all players equally. While you could technically play the game without ever trading a thing, there’s no way to win sticking with just blind luck.

– For a lighter game that has just as much focus on trading, check out Bohnanza, or as we call it BEAN! This is a classic card game from the 90s that still stands the test of time as one of the best trading games on the market. It has the added advantage of having a high player count, playing from two to seven players. Though I do admit it’s not very good with two players.

– If its the actual negotiation aspect of trading resources in Catan that you like, then take a look at Sheriff of Nottingham. In this game, each round someone plays the Sheriff while the other players are trying to sneak contraband goods into the city. This mixes negotiation with bluffing and social deduction. This game is also on the lighter side and great for groups with little gaming experience.

If you dig rolling dice to see what resources you get each round, check out these games:

– This game is all about building up a city from humble beginnings to a grand metropolis. Each round dice are rolled and put on a grid representing the buildings in your city. Most buildings produce resources, resources that are used to replace spots on your board with better buildings. This is a great lighter dice based engine builder.

– This is probably my favourite dice based resource generation game. In Villages of Valeria, you start off with just a Peasant and a Knight and head out to hire more citizens to your party in order to defeat monsters and conquer domains. The neat twist in Villages of Valeria is that you roll 2d6 and get resources for the number rolled on each die plus the sum of both dice. I’ve yet to see that used elsewhere.

Roll Through The Ages

– You could probably consider this game a roll and write, though you don’t have to write anything down as everything is tracked on a wooden peg board. Roll the dice to generate resources used to build technologies and wonders. This is a quick almost filler level civilization building game.

If your favourite part of Catan is stealing resources from other players or playing that monopoly card right after someone generates ten wheat these games may be for you:

– This is a dice based worker placement game where one of the worker placement spots lets you steal resources from another player. There’s also another take that element in the area control aspect of building colonies on the planet. As an added bonus for this list, the other thing you can do in this game is use your dice to generate resources, so this also fits in the last category somewhat. This is one of the best games in my collection and strongly recommended overall.

– This is a wonderful pirate themed pick up and deliver game. What needs to be mentioned here is that not only do players control their own merchant ships, they also control a pirate. Players use this pirate piece to steal resources from the other players and get points for then taking those resources and burying them on deserted islands. Robbers stealing resources to pirates stealing resources, it’s basically the same thing.

– While Dominion doesn’t always have a take that element to it, if you include the right cards in the market it can. For example, cards like the Thief which takes Copper cards from opponents, or the Witch that adds Curse cards into everyone else’s deck.

Those are my suggestions on games that Catan fans might enjoy due to having similar mechanics. What would you recommend for David so that he’s not stuck playing Catan forever? Let us know in the comments.