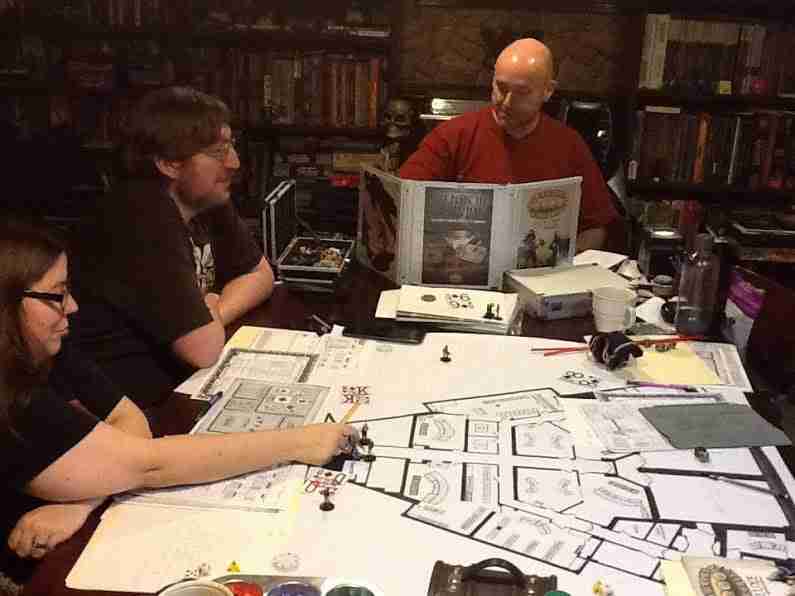 Today we’ve got 11 roleplaying game recommendations featuring RPGs that use a standard deck of playing cards. All of these role playing games feature the use of playing cards in some way, some as the main mechanic and others through supporting mechanics.

This topic is inspired by a comment we got from someone clicking Ask The Bellhop and asking about RPGs that use cards.

We’ve got a fan looking for RPGs that use playing cards: This article was inspired by a comment that we received from one of our fans, Sewer Rat Zero, who wrote:

Sean and I discussed this question on our live show last Wednesday. You can check out that discussion of RPGs using playing cards on YouTube.

In addition to looking at eleven games that use cards, Sean also came up with a list of three solitaire games that have strong RPG elements. I’m not going to repeat that list here on the blog, you will have to watch the Youtube segment for that or wait for the full podcast episode to go live.

What I am going to do here is summarise and share my thoughts on the eleven different RPGs we discovered that use a standard deck of playing cards.

What are some of the best RPGs that use a standard deck of cards?

Savage Worlds – Up first I need to call out the one game system I know, own, and have played, that uses playing cards and that’s Savage Worlds. This is a generic roleplaying system that’s meant to be fast, furious and fun. It is a great system for high action, pulp-style, adventures.

The thing with Savage Worlds is that it’s primarily a dice driven game. Where the game does use cards is for its initiative system and during adventure downtime, at least in the core rulebook. Many Savage Worlds settings and splat books include additional ways to use playing cards during the game. 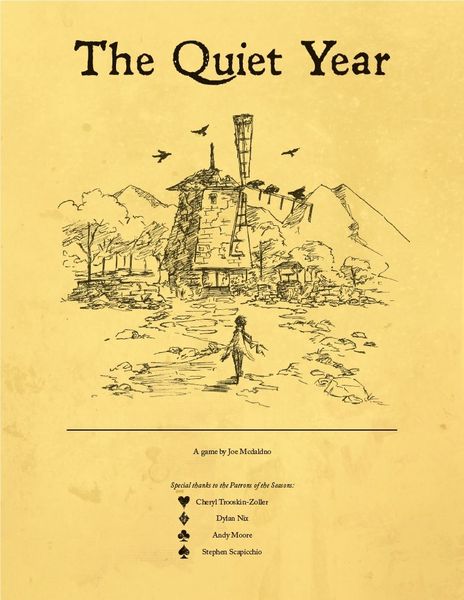 The Quiet Year – This is a hybrid board game/RPG that reminds me of games like Microscope, where the players are collaboratively building a world. The Quiet Year is also called a map game as a big part of the game is drawing a map together as you play.

This is an RPG where players will be exploring the struggles of a post-apocalyptic community during one year set right after the end of a great war. Unlike most post-apocalyptic games, the focus here is on building something positive within that quiet year. A full fifty-two card deck is used here with each card corresponding to one week during the year. Through the Breach – Malifaux is a skirmish miniature wargame well known for it’s very highly detailed and high-quality miniatures and unique setting. Through the Breach is a pen and paper roleplaying game set in the world of Malifaux.

The Malifaux setting is a mash-up of steampunk, magic, horror, and the Cthulhu mythos. In Through the Breach players take on the role of The Fated, men and women who have caught a brief glimpse of their destinies. The game includes a system where characters can seamlessly swap professions. This Malifaux based RPG only uses standard playing cards. Murderous Ghosts – This game released for Halloween is billed as a one-shot for two or more players. It’s not often you find an RPG that plays well with only two players, so Murderous Ghosts starts off with bonus points right there.

The goal in Murderous Ghosts is for the players to creep each other out. There’s no prep required for this one, you just turn to page one of the book and start doing what it says following a somewhat choose your own adventure style format.

Together the players are telling the tale of an urban explorer deep inside a haunted, abandoned hotel. One player is playing the ghosts with the others act as a panel controlling the actions of the explorer. This card driven one shot RPG comes from Vincent and Meguey Baker, the team behind Apocalypse World. Unbound – Unbound is another universal roleplaying game system, similar to Savage Worlds mentioned above. What sets Unbound apart is that you sit down with your group to play for the first time with no pre-existing idea of what you will be playing. The players create the world, the plot, and the adversaries during character creation using a series of leading questions.

Another thing that makes Unbound stick out is a rather detailed zone-based, tactical, playing card-driven, combat system. This isn’t a rules-lite game that uses cards, this is quite the crunchy RPG. One that is designed for running longer games and campaigns and not one-shots.

Aces & Eights – This Old West themed RPG is only the second game on this list that I actually own. I watched the development of this game by Kenzer Co. back when I subscribed to the Knights of the Dinner Table comic book. The game was based on a cattlepunk story arc that started in the comics and based on an outcry from the fans became a real game. The adventures in the comic sounded like a lot of fun so I picked up a copy of Aces & Eights. I’m sad to say that my copy is still sitting on my RPG shelf in shrink wrap.

This big meaty role-playing game is the most crunchy western RPG out there. Similar to Savage Worlds, the main system in this game is dice-based. It’s during the combat system that the playing cards come out using a rather unique shot clock system that has players placing a clear template over shadow pictures of their enemies showing what parts of them are undercover etc. Cards are also used for gambling in the game with a single hand of cards representing a full poker game.

Aces & Eights is by far the crunchiest game on this list and one that someday I will actually sit down and read. Dust Devils – Dust Devils is another Western RPG that sticks to using cards to stay with that western theme. Dust Devils won the 2002 Indie RPG of the year, also winning Best Synergy of Game and Rules, Best Production and Most Innovative Game that same year. This one caught our eye not only because pen, paper, playing cards and poker chips are all you need to play, but because the mechanics of poker also are part of the resolution system, which is deliciously thematic for a Western and even matches up stats to suites. Another unique aspect of the game is that the narrator’s role can change after each hand of cards is played. During any scene, the player playing the highest card is the one who narrates how the scene ends. Motobushido – I kickstarted Motobushido back in 2013 at the PDF level as I thought the concept of bike riding samurai sounded awesome. This game came from Nathan Phillip Cole (NPC), now probably best known as one of the hosts of the Bikers Dice and Bars podcast. He summed the game up like this: Motobushido is a game about really sweet duels between really cool samurai who ride really awesome motorcycles. It’s Sons of Anarchy starring Toshiro Mifune, underscored by Bushido Blade.

Most resolution in Motobushido is done using a standard deck of cards, using a who flipped the highest card wins mechanic, but the game also includes a detailed duelling subsystem that is meant to recreate the feel of a samurai duel. I love the aesthetic of this game and my only disappointment is the fact that I didn’t back at a level that would have gotten me a physical book. Castle Falkenstein – The oldest game on this list by far is Castle Falkenstein by Mike Pondsmith (of R Talsorian games / Cyberpunk fame). This playing card-driven RPG has been around since 1994, proving that using cards for conflict resolution isn’t a new thing.

Castle Falkenstein is a ‘steampunk meshed with fantasy’-themed roleplaying game, mixing goggles and gears with goblins. It’s considered by many to be one of the earliest storytelling games with a bigger focus on narrative, and much less and lighter mechanics, than the popular games of its time.  For all the years this game has been around, it’s one I haven’t personally had the chance to check out. Monkey: The Roleplaying Game – I had to put this game on the list because of the legends it’s based on. Monkey The Roleplaying game is based on the Chinese mythological character of the Monkey King and the classic Journey to the West myth.

Players take on the role of out of grace immortals seeking redemption by escorting a mortal (the monk Tang Sanzang aka Tripitaka) to India. I’m a big fan of the Monkey King character and this particular myth, so playing an RPG within this world sounds awesome to me. Two decks of cards are needed for this one, one for the GM and one for the players to share. 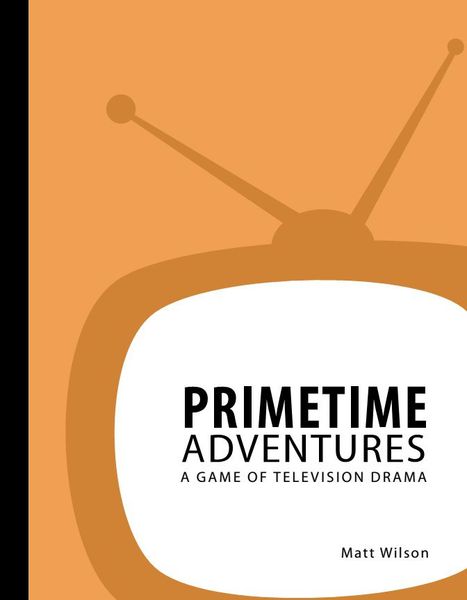 Primetime Adventures – Have you ever sat there watching a TV series and find yourself thinking, “This would make an awesome RPG, but one hasn’t been written yet”? Primetime adventures may be the game you need. It is the TV series RPG and is all about character growth and personal drama spanning any setting.

A game of Primetime Adventures starts off with a brainstorming session where the group will decide what kind of show they want to play out. One player will take on the role of producer with the other players playing the protagonists within the show. Campaigns are broken into five or nine session seasons meant to emulate a standard TV season.

The resolution mechanic here is dead simple with players drawing cards based on their traits and hoping to draw more red cards than the opposition. Fitting with the theme, characters important to the current story arc draw more cards than characters serving a supporting role that episode.

Above you have a list of eleven different RPGs that use standard playing cards that caught my eye. I know this list is far from inclusive so what I would love to hear is what roleplaying games have you played and enjoyed that need a deck of cards to play? Let me know about them in the comments below!